We hadn’t played a naval game for a while, and so we opted for this – a sea battle in the era of ironclads, but without a single ironclad in sight! Still, David Manley’s excellent rules cope with wooden-walled steamships perfectly well. This game, a refight of the Battle of Rügen (also known as the Battle of Jasmund), fought off the German Baltic coast in March 1964, was played on a 6×6 foot table. 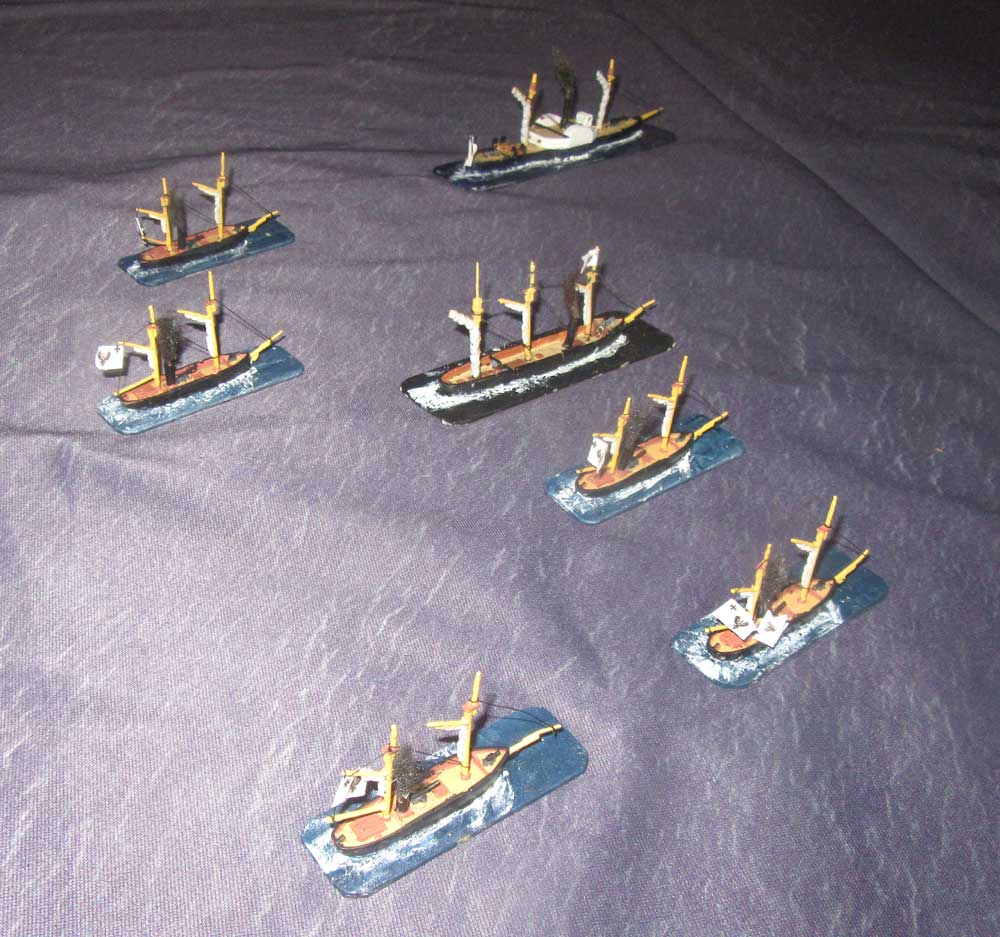 In it, a conventional Danish squadron blockading the Baltic coast was attacked by a Prussian force spearheaded by the 1st Gunboat Division. Sean 1 and I played the Prussians, with Sean taking the gunboats, while I took the  screw corvettes Arcona (the flagship) and  Nymphe. The Gunboat Division was made up of the paddle steamer Loreley, the 1st class gunboat Comet, and five 2nd class gunboats (Hay, Hyäne, Pfiel, Skorpion and Wespe). It was something of a mosquito fleet, good for stinging and not much else. That’s them up above. 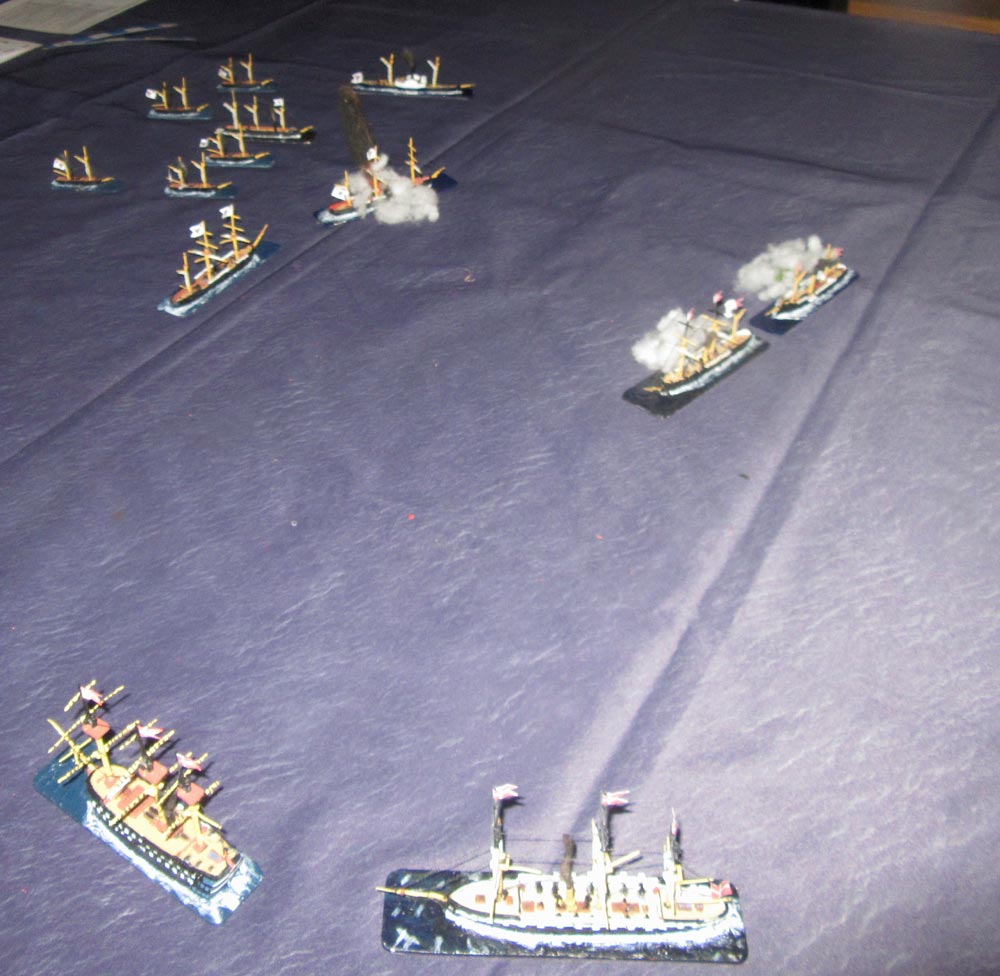 For his part Nick commanded the more powerful Danish blockading squadron. His flagship was the screw frigate Sjaelland, supported by two screw corvettes (Heimdal and Thor) and the screw ship-of-the-line Skjold, converted from an old plastic model of HMS Victory!  That’s her and Sjaelland in the foreground above, with the two corvettes on the right. 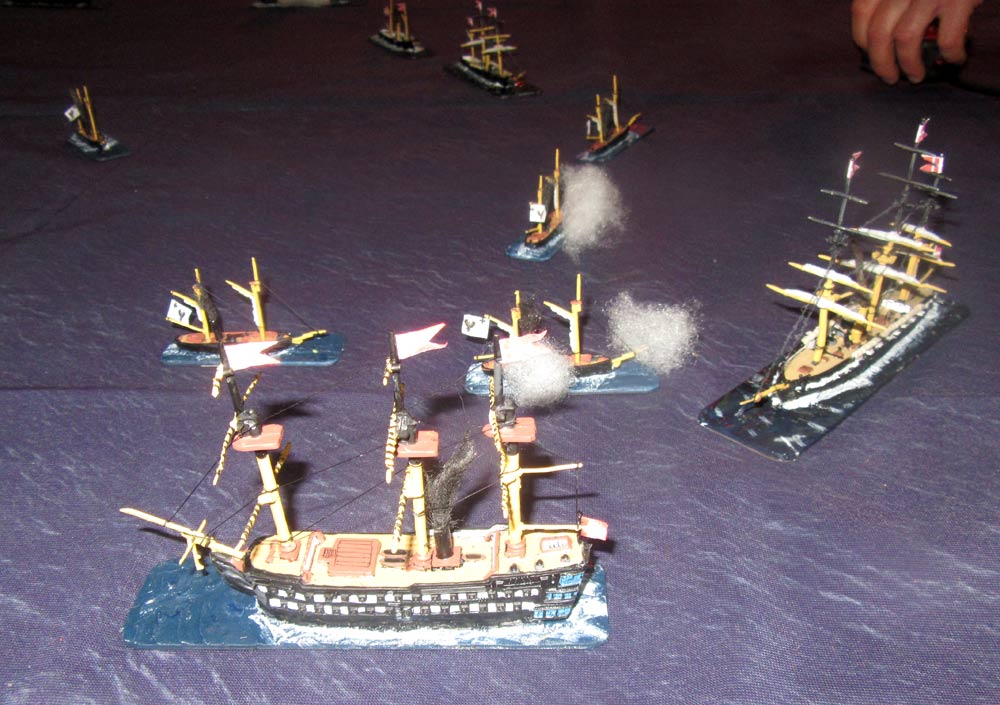 The battle began with the Prussians coming out of Greifswald Bay, from the long western table edge. The Danes, out to sea to the west, altered course to intercept.  Sean’s gunboats were first into action, popping away at the two largest Danish ships with their bow guns. The Sjaelland fired back, and one of the gunboats, the Hyäne, was left dead in the water, with her steam pipes burst. 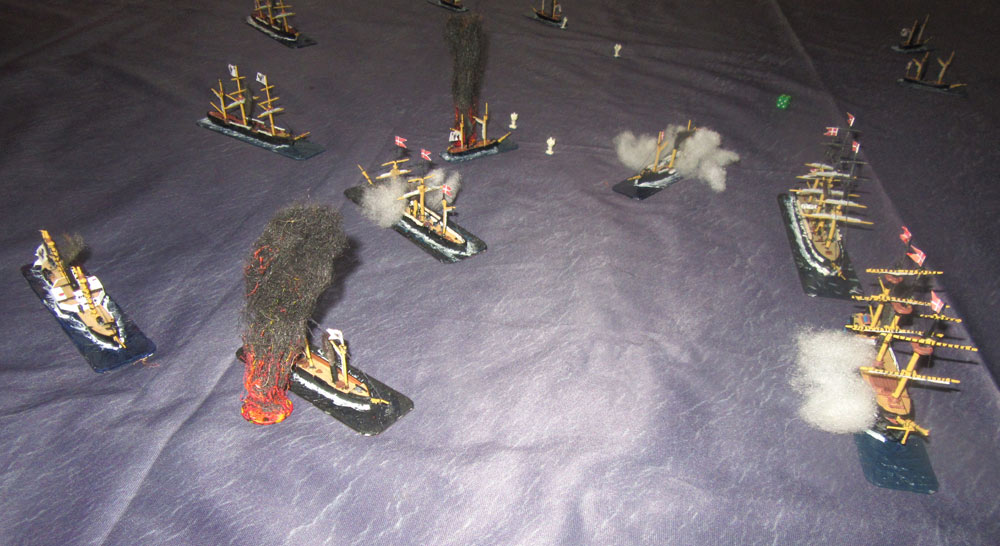 The Danes curved round to the south-west, while my own two Prussian corvettes, having overshot the enemy, turned east and then south. Meanwhile the gunboats were in the middle of the Danes, blasting away without much effect on all sides. This was plucky stuff – each gunboat carried a pair of rifled 12-pounders, while the Prussian corvettes mounted 12-16 guns apiece. 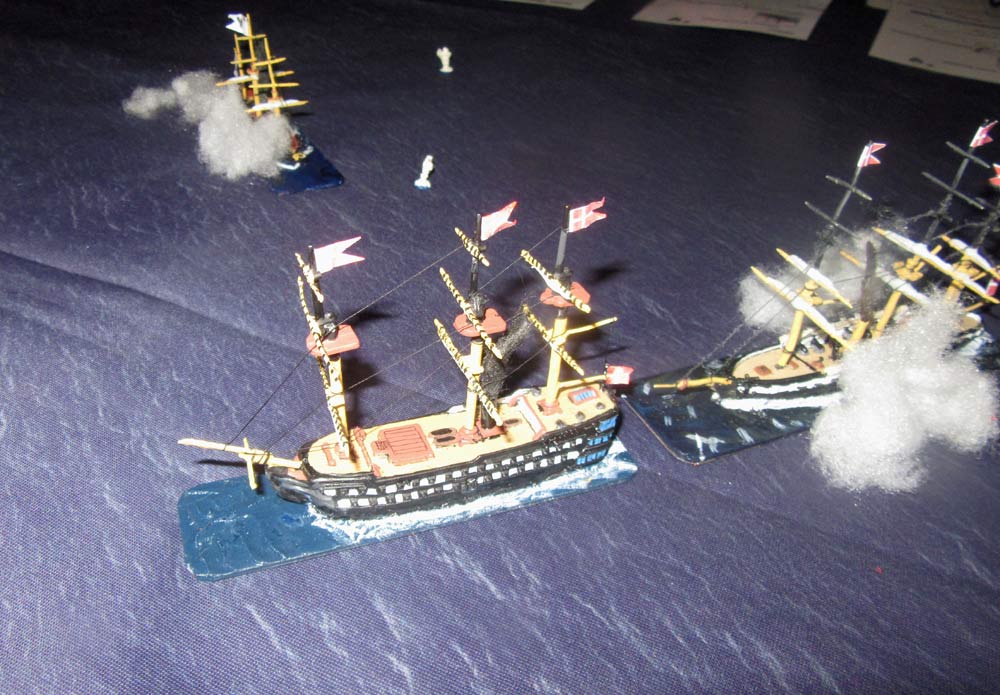 As for the Skjold, she was something of a death star, with 56 smoothbores and 8 rifled 18-pounders. Nick’s defensive die rolling was excellent too. After a few turns the gunboats had largely shot their bolt. Three of them had been badly smashed up, including one which was dead in the water, and another with a smashed rudder, which was now heading straight towards the beach on Usedom Island. The Comet was on fire. Only the Skorpion and Wespe were still undamaged, and still in the fight, alongside the battered Hay.

By now the Danes had worked their way between the gunboats and their line or retreat back into Greifswald Bay. Nick turned the Skjold and Sjaelland northwards, heading slowly towards the two Prussian corvettes. They though, were busy fighting their own duel with their two Danish counterparts, with the remains of the gunboat division harassing any Danish ships within range.

Even the paddle steamer Loreley (above) was joining in, gamely firing at the Skjold, even though all she carried was a pair of 12-pounder smoothbores.  She was supported in this by the Comet, which remained on fire throughout the rest of the game. Strangely though, Nick’s dice gods had briefly forsaken him, and so his two gnat-like assailants remained unharmed, while chipping away at the steam-powered ship-of-line’s gunnery factors thanks to a few lucky hits.

Over in the centre of the table things were hotting up. Arcona dried to ram the Thor, but it was just a glancing blow, and they scraped past each other, blazing away. The Thor was in a bad way by now, and her guns had almost been completely silenced. Heimdal was suffering too, coming off worse in her duel with Nymphe and two of the small Prussian gunboats. It wasn’t enough though, to force any kind of victory in a battle which was becoming something of a stalemate. The blockade wasn’t going to be lifted that day. 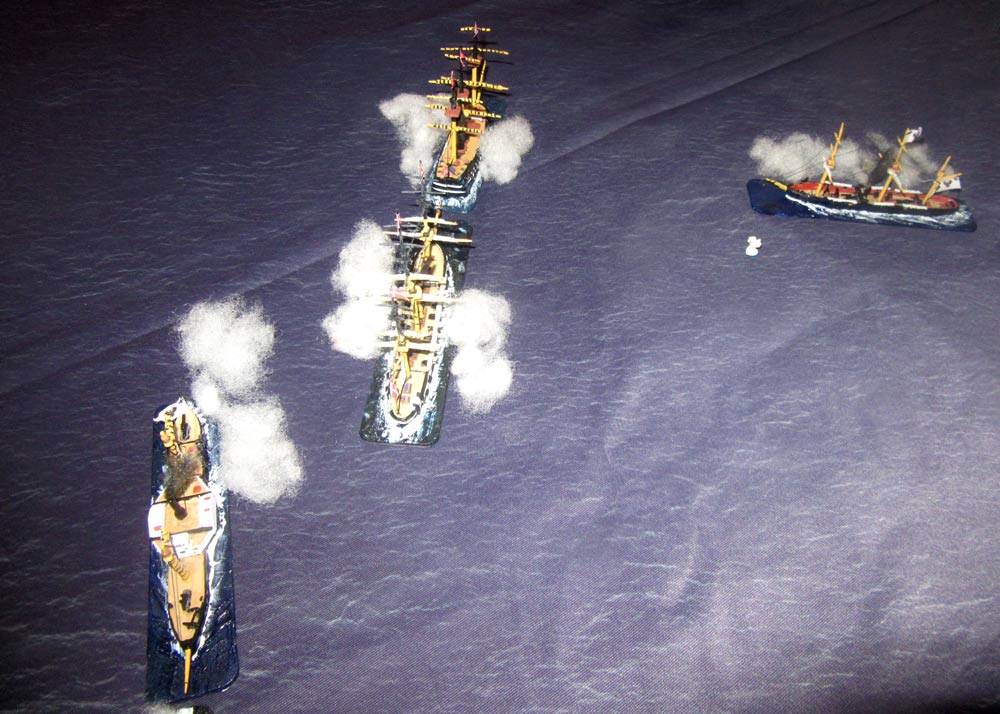 Wisely the Skjold and Sjaelland decided to ignore the puny Loreley and Comet, and instead they turned towards the two Prussian corvettes. This though, unmasked the Prussian escape route. So, following a signal from Capt. Jachmann in Arcona, the Prussian ships broke off the action, and headed back toward  Greifswald Bay, taking the Hyäne under tow as they passed . Still, despite being an indecisive action with no ships sunk, it was a fun game, and David’s rules did the job very nicely indeed. Incidentally, for those who’re interested in these things, here are a couple of the ship cards I use for my Dahlgren & Columbiad games. 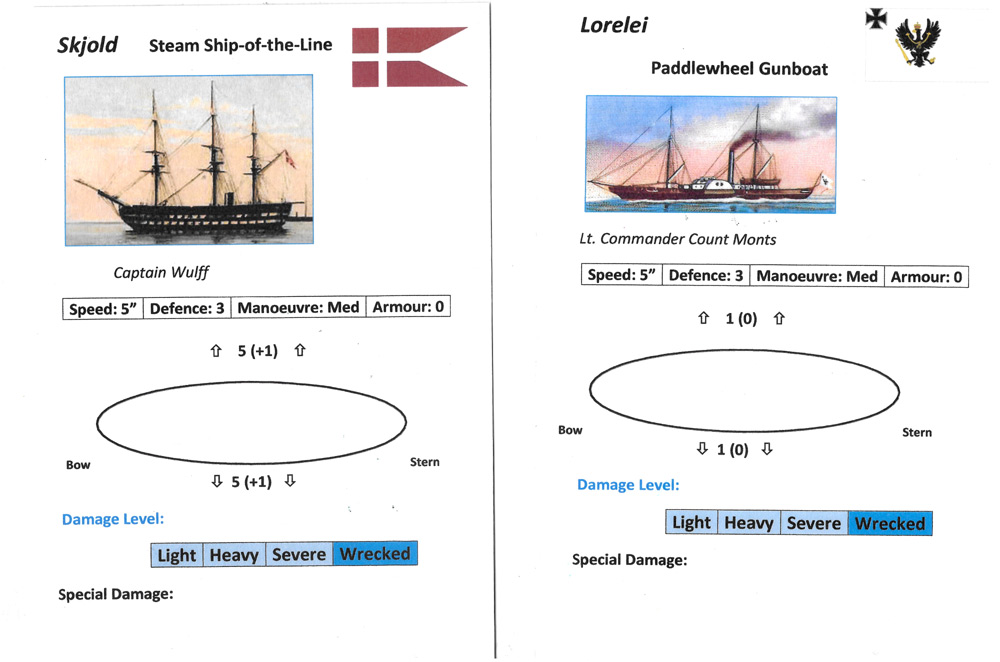