About seven years ago, I refought the Battle of Helgoland, the premier naval clash of the Prusso-Danish War of 1864. The battle  actually involved the Austrians too, as allies of the Prussians, but the name of this little war sidestepped the awkwardness of a three-cornered title. Anyway, after being dropped down stairs (think mast spaghetti), smoke damage from a fire and then a major rebuild, this was the comeback outing for these cute  ship models – all from Thoroughbred Miniatures. 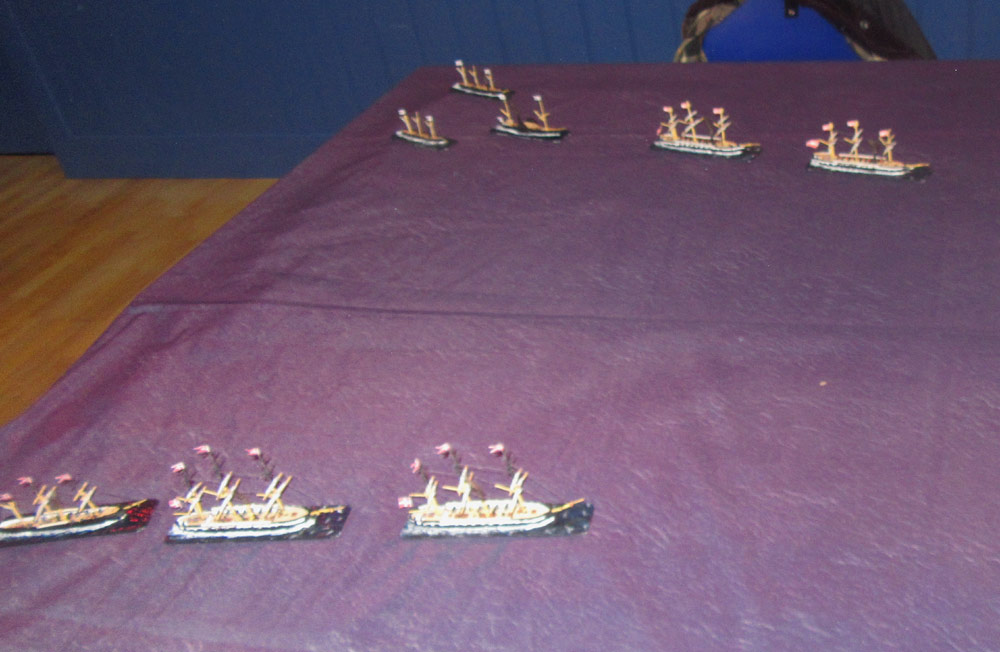 In this game, Nick and Chris joined forces again to command the Austro-Prussians, while Sean and I took the Danes. There were only eight ships in the battle – two Austrian and two Danish steam frigates (Schwarzenberg and Radetsky versus Nils Juel and Jylland), the Danish steam corvette Heimdal, and three Prussian gunboats, the paddle aviso Preussischer Adler, and the two smaller screw gunboats Basilisk and Blitz. I took the Danish flagship Nils Juel, leaving Sean and Chris with two ships apiece, while Nick had the three smaller Prussian warships. The game was played out on a 6×4 foot table. 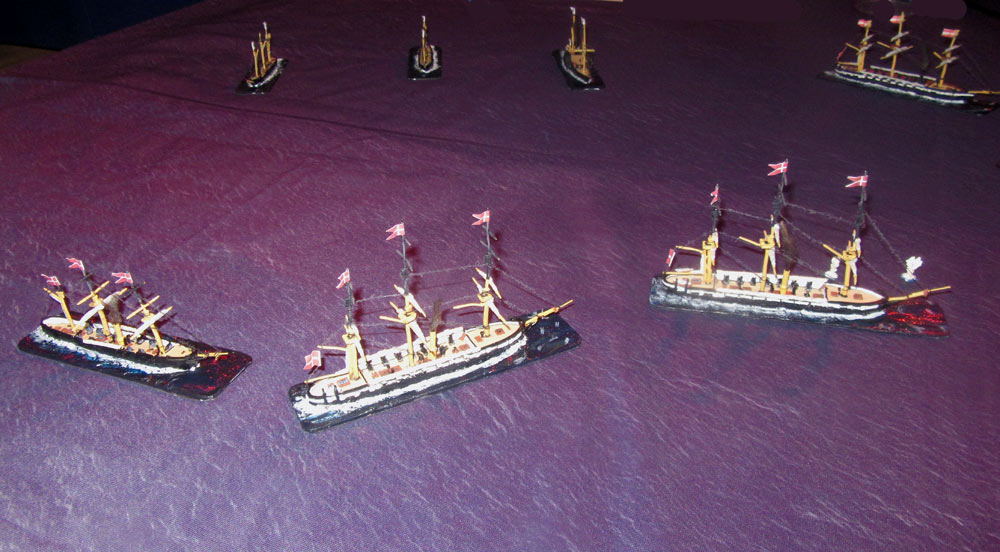 This was our first game with these rules, but they’re by David Manley, and the basic mechanics are pretty similar to Far Distant Ships the rules we use for fleet actions from the Age of Fighting Sail. The main differences were that here there were no rules covering squadron formations, as battles were usually fought with much fewer ships, and sail power was replaced by steam. In theory, this being the ironclad era, armour was important, but in our battle all the ships were wooden-hulled, so this didn’t matter. 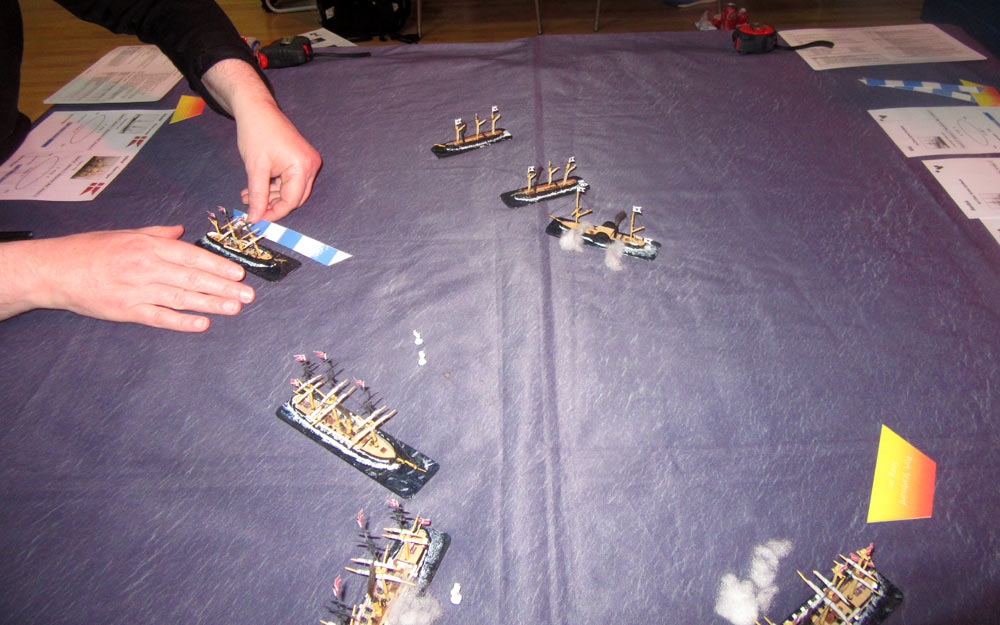 As happened in most of our games, Nick steered straight towards the enemy, and began asking questions about ramming. As the Prussian gunboats were tiny, I wasn’t too worried about this. Instead, I was more concerned about Chris, playing the part of the Austrian Captain Tegetthoff. Chris already has a formidable reputation for dice rolling, and this was about to be enhanced even more. In the course of several turns he seemed to roll an awful lot of “6s” for gunnery, which  meant he knocked lumps off my frigate. 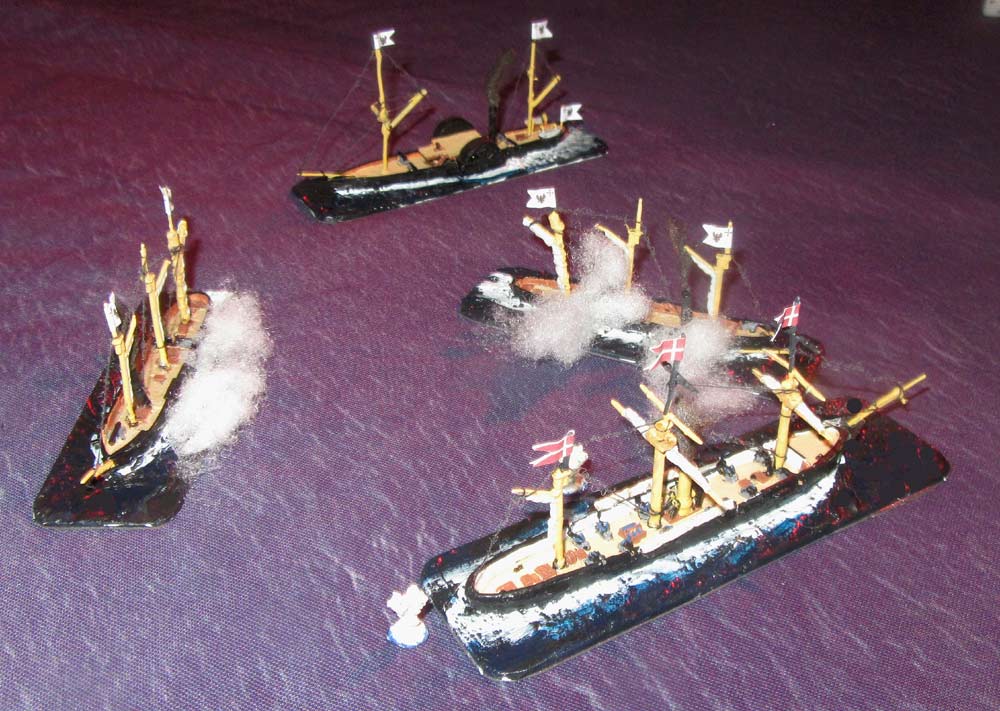 Meanwhile Sean was being pestered by those Prussian gunboats, and left the Heimdal to keep them at bay, while the Jylland set off after the Austrians. Meanwhile I’d turned the Nils Juel around, so I could fire my undamaged starboard battery at the Radetsky. So, the pretty lines at the start of the game had dissolved, and we were left with a naval dogfight, fought out at close range. 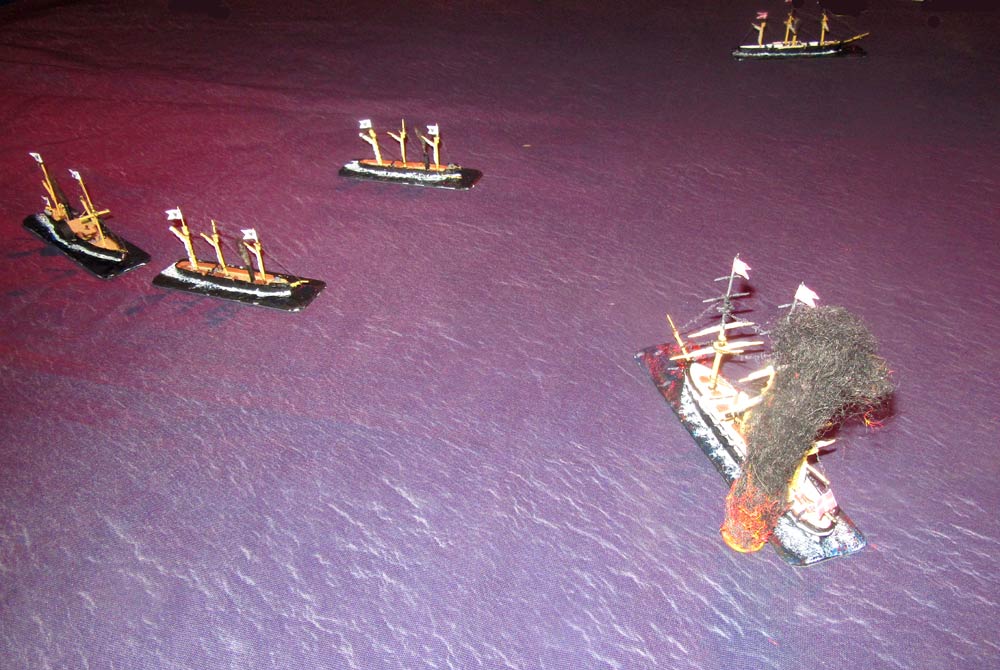 Then Chris rolled one of his usual “6s”, followed by another on the Damage Table, which meant a Critical Hit. The result was a fire on the Nils Juel. FOr the next few turns her crew would be as busy fighting the flames as they were the enemy. It was just as well for the Prussians as her turn brought her closer to those pesky but largely ineffective trio of gunboats. They closed in on the frigate, which was still being fired at by the Austrians. Inevitably at that point, Nick tried to ram the Blitz into the much bigger Danish frigate. 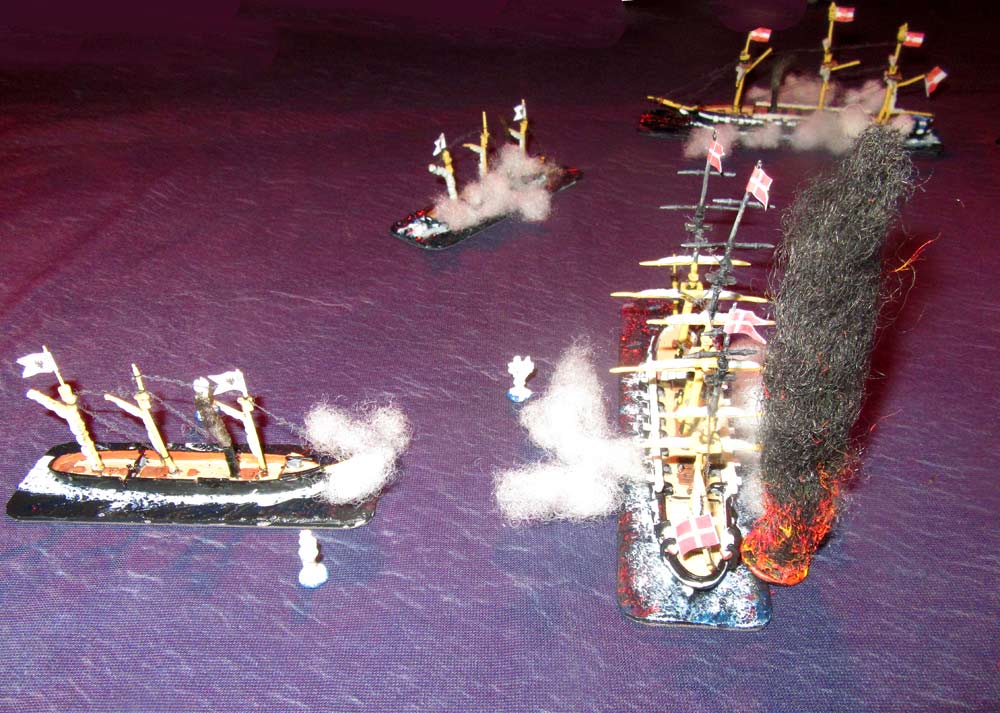 The Nils Juel though, simply shrugged off the ramming attempt. The Blitz had struck the frigate’s port beam squarely, but it wasn’t enough. Instead, while the Dane kept on going, the little Prussian gunboat was left flooding and dead in the water. At that point I had every faith that my crew could extinguish the blaze. After all, a damage control roll of 1-2 on a D6 meant it was put out, and only a “6” meant the fire became worse. I duly rolled a “6”! That meant that the fire had become “Raging” – not a good thing at all! 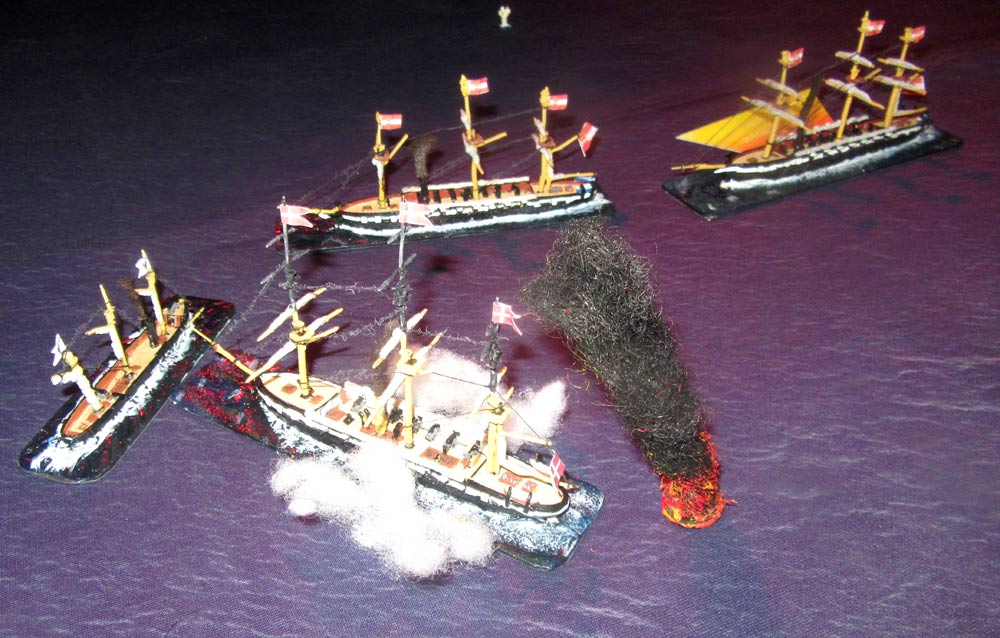 Still, there was a battle to fight, and Sean’s two ships, which had taken themselves out of the dogfight, were now coming back for another pass. They plowed into the swarm of ships, ignoring the gunboats to fire at the Austrians. The Nils Juel was still in the fight too, trading shots with the Austrian Radetsky. Then it was the damage control phase again, and the firefighting. Anything but a “6” was needed  – and that’s exactly what I rolled! That meant the Nils Juel had to be abandoned, as the flames neared the magazines. 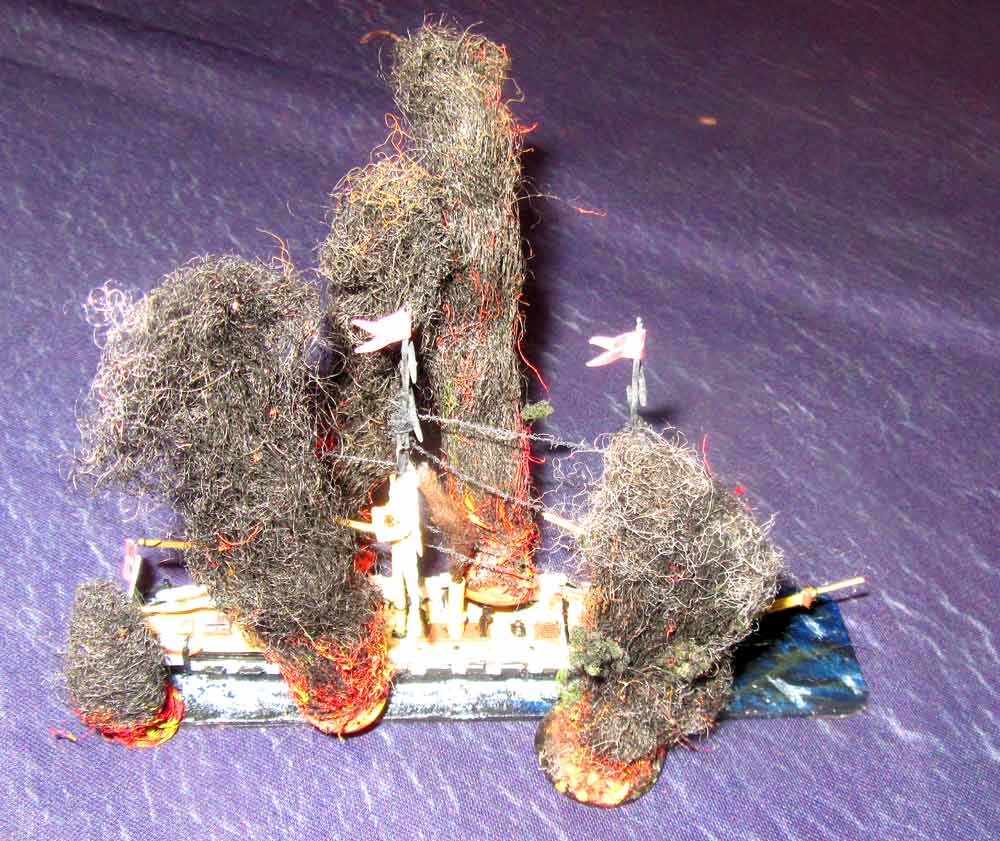 For a turn it looked like the Austro-Prussians had won. The Danes were down to just one frigate and a corvette, while all five of the enemy ships were still in play.  Granted, the Prussians hadn’t achieved much, but the more knocks the bigger ships took, the more chance they had of successfully scoring a telling hit on them. Then, Chris managed to snatch a draw from the jaws of victory… 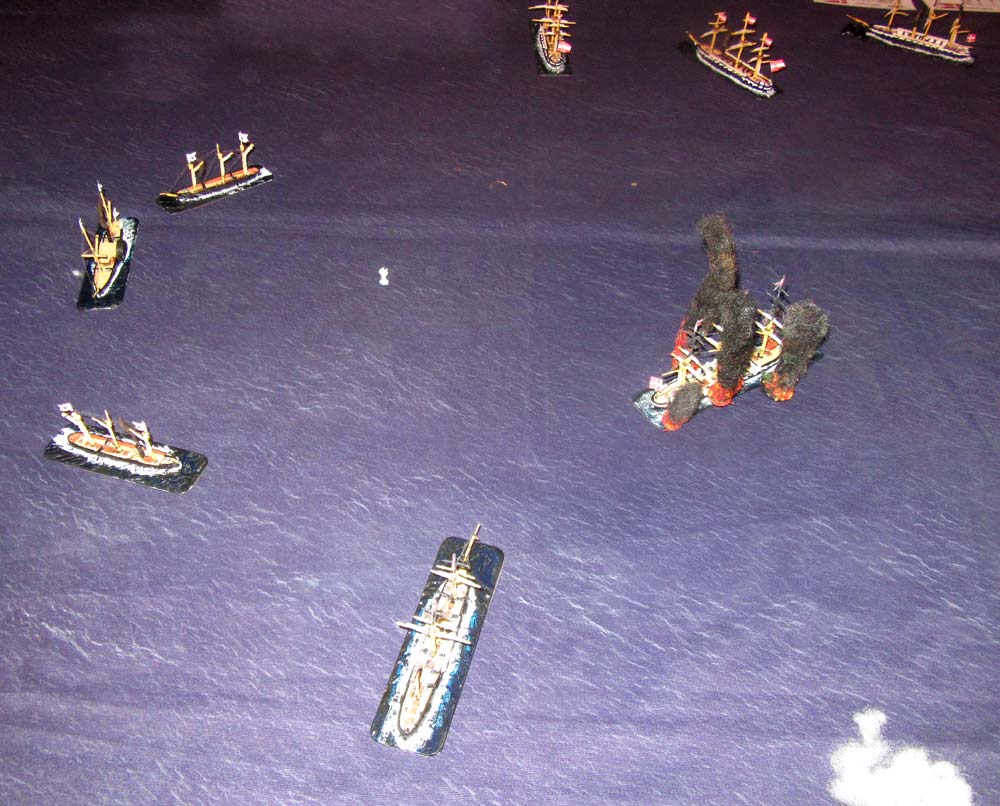 A lucky shot from the Jylland struck the Radetsky below the waterline, and the Austrian frigate started to flood. As it happens, it turned out that Chris’ ability to roll “6s” for gunnery also worked for damage control. As a result, the crew of the sinking Radetsky also began abandoning ship, as the flooding became unstoppable. The final  broadside of the game was from the Schwarzenberg, which fired into the Jylland’s stern at point blank – and missed. Chris, in the last gunnery turn of the game, finally rolled a “1”! 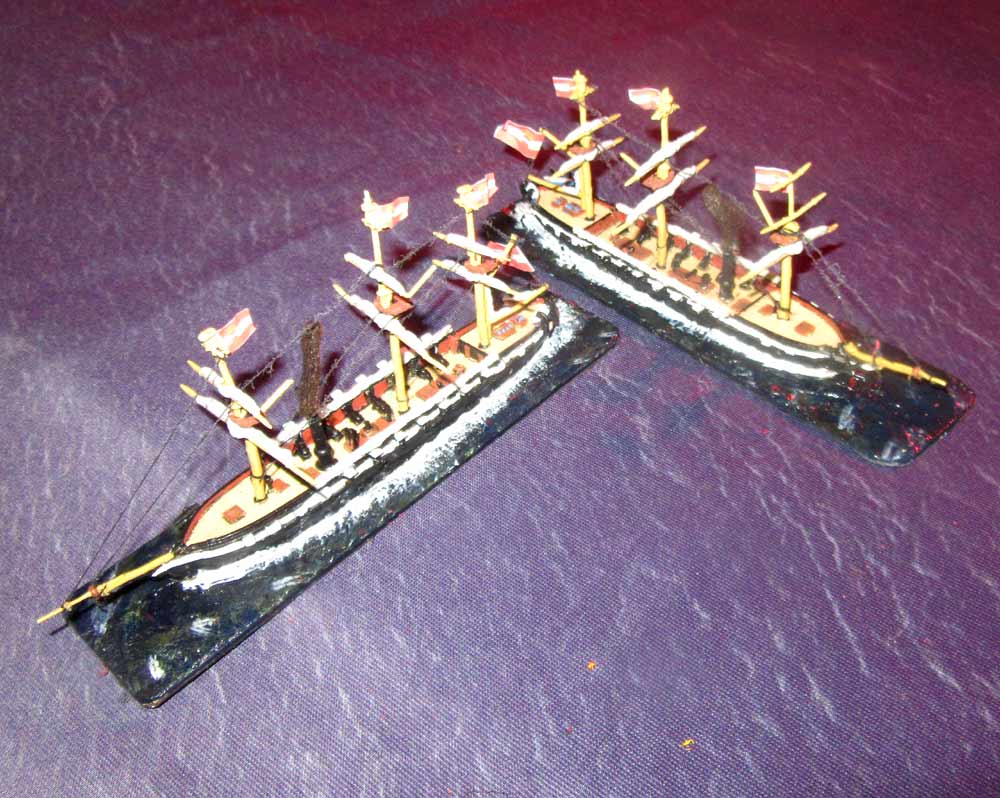 That then, is how the game ended. Both sides had lost a steam frigate – the Danish Nils Juel, and the Austrian Radetsky. All of the other ships were slightly knocked about, but hadn’t suffered any really crippling damage. So, the game was duly declared a draw – a bit like the real battle, only with two ships lost. As for the rules, we all got the hang of things pretty quickly, and the game fairly sped along. D&C are really good! It’s also  inspired me to build the other Prusso-Danish War ships I’ve had lying around for years. We’re also tempted to test the rules out  by fighting with some real ironclads – and it just so happens I have a box of ACW ships ready to go…  Oh, before I sign off, here’s one of the  laminated ship cards we used – a handy and fairly simple way of showing a ship’s basic stats and recording and damage she takes – in this case hull damage, and a loss of firepower to Heimdal’s starboard battery. 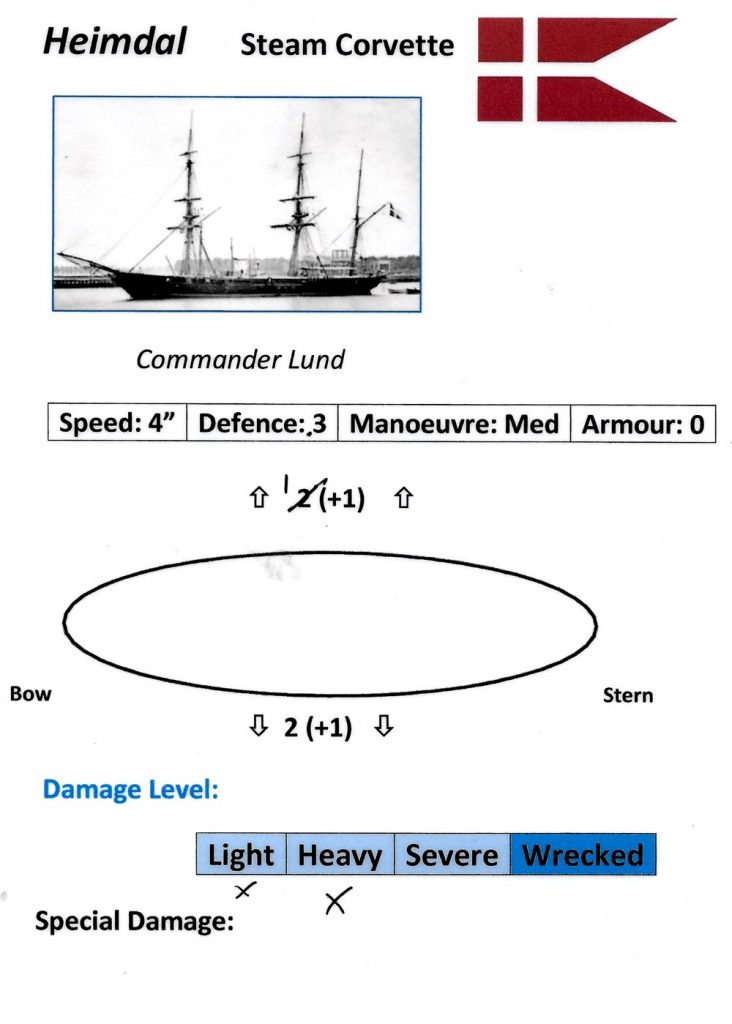