About ten years ago, during a trip to the States, I bought a load of Thoroughbred Models – lovely 1/600 scale metal kits. They were a mix of American Civil War ironclads and wooden-hulled steam-powered ships. On a whim though, I painted up the latter as Danish, Austrian and Prussian ships of the 2nd Schleswig War of 1964. I actually played a game with them too, in December 2013 – a refight of the Battle of Helgoland. It all looked pretty darned good, and I planned to expand the 1864 fleets to include more ships. 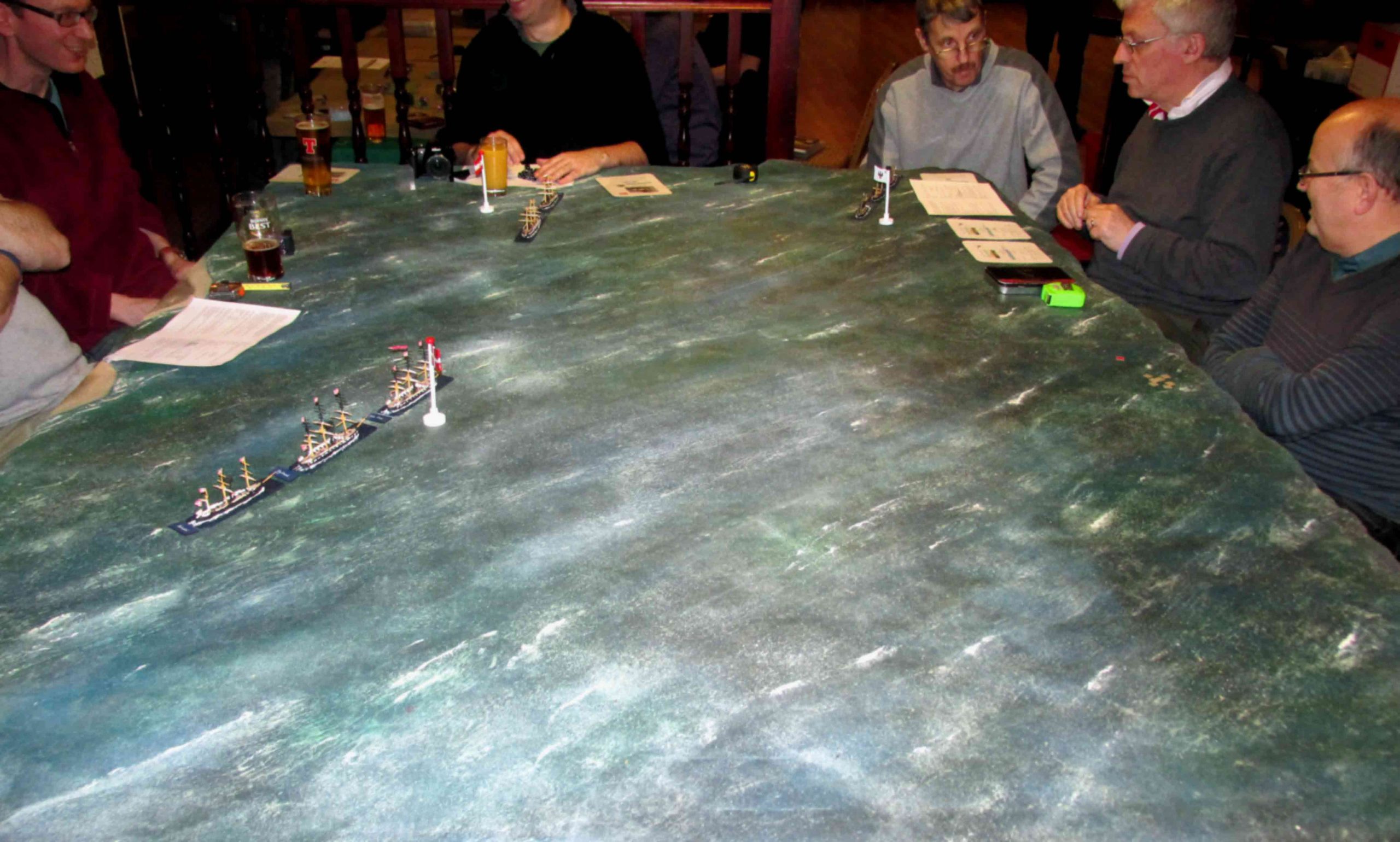 Then disaster struck. During a house move their box was dropped and  tumbled down the stairs. I was left with heartbreaking spaghetti-like mess of bent masts and tangled rigging. So, I stuck the box at the back of a cupboard (closet), and told myself I’d rebuild them when I had a chance. I never did. 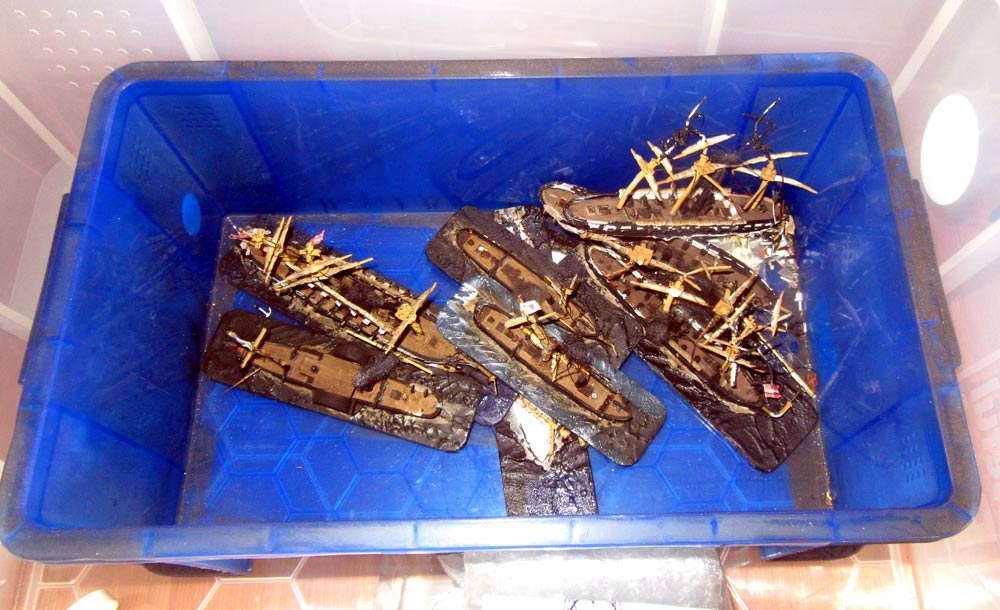 Then in January 2019 they went through a house fire, and got badly smoke-damaged. Again, I peered into this half-forgotten box, and quickly shut it. It looked awful – smoke-stained paintwork adding to the tangled mess. 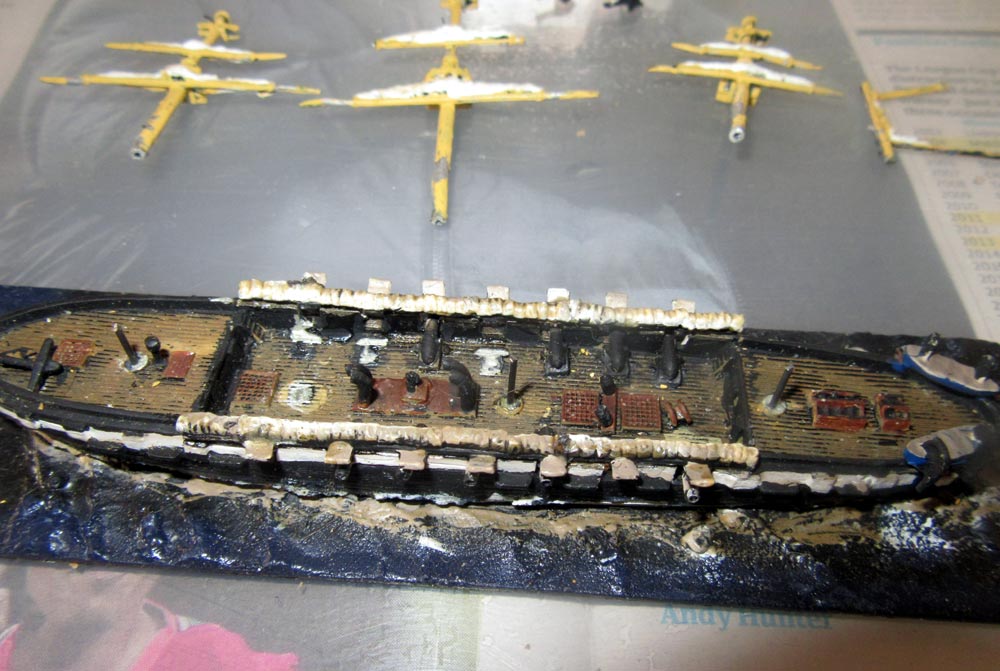 It was all very dispiriting. Remember how pretty they looked? Well, a few weeks ago, I came across the box again, hidden at the back of my garage in Orkney. So, I decided to see what I could do with them. The first thing I noticed was that the hulls were intact. The masts too, could be teased out, and the spars straightened. So, it was just a case of cleaning the models up, replacing any missing bits, repainting them, then remasting and rerigging. Simple, eh? 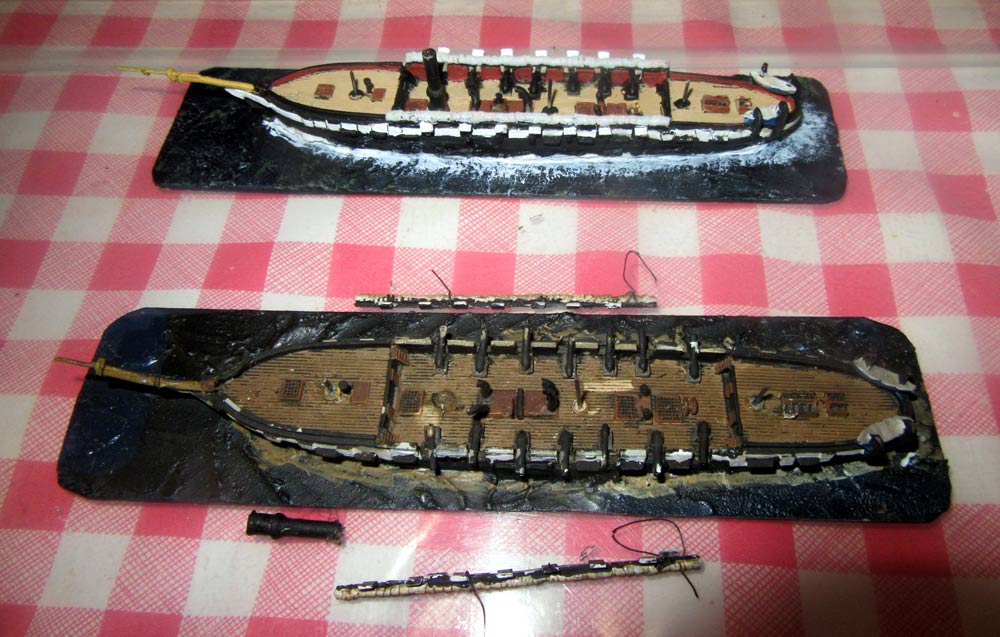 Actually, it got easier as I went on. I tackled the worst one first – the Austrian steam frigate Schwarzenberg. These were all Thoroughbred’s USS Hartford models, so you faced the same problems with them all. I started on the hulls, and once they were cleaned, repaired and repainted, I worked on the masts. Here’s work in progress – the finished hull of the Schwarzenberg, and the untouched hull of the Radetsky.

Then, with the masts up, I tackled the rigging. That was okay, but the thread I used was a little raggedy – I may redo them. Still, once that was done, the models varnished and ensigns added, they looked as good as they did nine years ago, before disaster struck.

Here’s the result. I actually learned something from this. Each model base has magnetic sheet underneath it, and the box has steel paper lining it. So, while it won’t survive a tumble down the stairs, at least it’ll lessen the damage. Incidentally, Admiral Tegethoff ordered his two Austrian ships to strike their topmasts and yards before going into battle, hence the rather stumpy appearance. 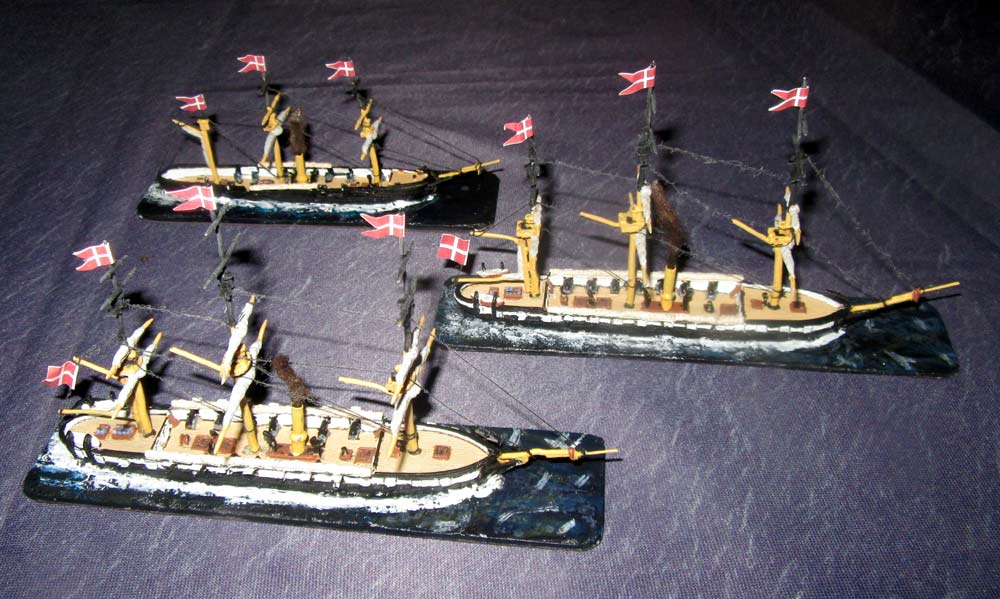 It was just as well really – the Danish ships had broken masts, and I’m sure the upper masts will come adrift now and again.  Sure, the paint job isn’t the best, and the rigging looks a little untidy, but I’m sure you’ll agree – they look much better than they did! 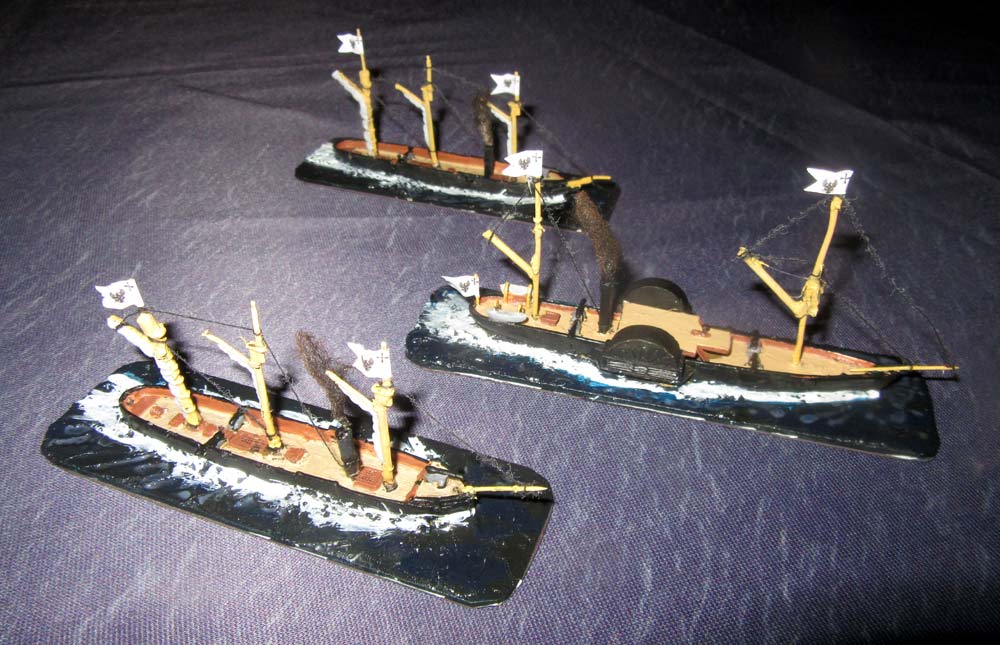 The Prussian contingent for Halgoland was pretty simple – two small gunboats and a paddlewheeler. I’ve got more models for all this too – those other unbuilt Thoroughbred kits bought a decade ago. Soon I’ll turn them into more Prussian gunboats, and a steam corvette. Obviously I plan to stage another Helgoland refight, this time using David Manley’s  rules for the period – Dahlgren & Columbiad. I actually used the eight rebuilt ships to test the rules out, and so I’m all ready for it. That’s them in action down below.

I’ve got other plans for the period too, including building some ironclads, and a steam ship-of-the-line, converted from a 1/600 model of HMS Victory. So – watch this space! At the moment though, I’m just happy these ships are back from the dead – a phoenix-like resurrection-and a happy end to a sad wargamer’s tale!