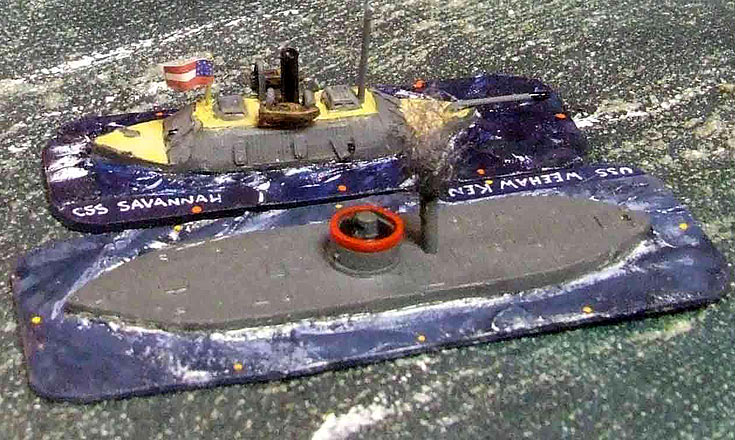 For a change we ran off to sea this week, or rather to a tidal estuary. We decided we hadn’t played a naval game for a long time, and consequently we dug out our American Civil War ships. The game was loosely based on the battle between the Confederate ironclad Atlanta and the Union monitors Weehawken and Nahant, fought in Wassaw Sound, in the mouth of the Savannah River in June 1863. As this was a rather one-sided affair for our game we added a wooden sidewheel steamer to either side, and a second Confederate ironclad – the CSS Savannah.

The game was fought out on a 6×4 foot table, lined with low-lying marshes and reed beds. The Confederates also had the advantage of a small coastal battery, covering the upper reaches of the Savannah River. The battle began with the two sides closing the distance, with the wooden sidewheel steamer USS Sebago hanging back from the fight. Her Confederate counterpart the CSS Beauregard (a fictitious renaming of the Governor Moore model by Peter Pig) had no such scruples, and rammed the monitor USS Weehawken. Both ships were slightly damaged in the collision, but not enough to put them out of action. The Atlanta also rammed the Nahant, although as she was armed with a spar torpedo this a little more serious. The damned thing didn’t detonate, and both ironclads scraped down each other, the Confederates firing a broadside which caused damage to the enemy’s hull and turret. So far so good for the Bubbas…

The reason the Union monitor didn’t fire back was quite simple – her crews were busy reloading their guns! In fact, that was their big disadvantage. While most Confederate guns could reload in three turns, the reloading of guns in turrets was a slower business, and this took five turns – or eight for the “super-heavy” 15-inch Dahlgrens!  The game then degenerated into a lot of circling around, another unsuccessful ramming attempt by the Savannah, and a fair amount of trading shots at close range.

Both sides suffered damage, but the Union monitors were so well protected that damage was minimal. Even their squat smokestacks were heavily armoured! After three hours of this – and some heavy beer drinking – both naval commanders decided to call it a day – and a draw. If anything the game was a slight moral victory for the Confederates. They caused more damage, and managed to hold their own against a pair of very dangerous monitors. The mint juleps would be flowing in Savannah that evening…

The rules we used were Smoke on the Water, which give a fairly realistic game, and is fairly fast paced, despite firing each gun individually. that said, using the optional “reload times” rule for guns dramatically influences the pace and flavour of the game. We think it makes it more interesting – and gives the Confederates a fighting chance – but others might prefer the more enjoyable but less realistic option of blasting away each turn. Oh, incidentally, the rules ask you to mark vessel speed by putting down markers (“S” for Slow, “M” for medium etc.). We prefer little squares painted to look like ship’s wakes -one for slow, two for medium, three for fast etc. It looks much better, and it works.

I also designed my own ship cards, as the ones they suggested using in the rules were just plain ugly. The ships we used were a mixture of Thoroughbred Models and Peter Pig ones, while the sea mat came from Richard at Terrain Mat. The reed beds were spray-painted scraps of teddy bear fur – I’ll improve on them the next time by sticking ’em on bases, but otherwise they looked the part.