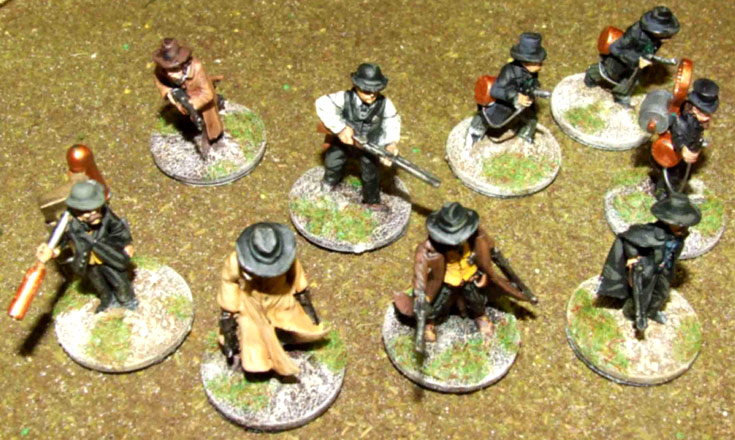 This is undoubtedly something of a departure for me. Normally I wouldn’t be seen dead playing fantasy games, but I ran this as a favour for an Orkney wargamer, who’s keen on the whole “Steampunk” genre. Also it seemed like a good way to bridge the gap between us historical grognards and the kids in the Orkney club. On the day of the game though they continued playing a fantasy board game, and blithely ignored our foray over onto “the dark side”. Still, at least the rules were produced by Osprey, and it gave me a chance to use my cowboy figures, which rarely get an outing. Worryingly I’d also bought the Clan figures at a show, thinking they might come in useful some time, and sure enough they proved ideal for the Mad Professor’s cult followers. This game was set in the States, so weird sects are par for the course…

The premise was that a mad scientist – Professor Wolmar – had a lair on a farm somewhere in northern Minnesota, close to the Canadian border. There he was developing a death ray, which he planned to use for his unspecified nefarious purposes. A local cult had sprung up, whose members were fanatically devoted to Wolmar. This cult was led by a chap called Marius – who in reality was something of a cad, and in it for what he could get. Marius planned to steal the professor’s blueprints, and sell them to William Randolph Hearst. Instead the tycoon sent his own private company – Hearst’s Rangers – to seize the plans for himself, and the professor and his ray too if they could get away with it.  Word of this dastardly plan reached the authorities in Canada, and so Captain Caruthers and his private company – the Indian Cavalry Club – were sent to foil Hearst’s men, and to secure the plans for Her Majesty’s Government. The scene was set for our first ever clash between two “Steampunk” companies.

In the view above north is to the top. The two companies approached the farm from opposite edges of the small 4×4 foot table. Hearst’s Rangers (played by Chris Werb) burst out of the trees north of the church, and used the fact that the house had no windows on its western side to approach unobserved – or almost so. They were spotted by three cultists posted in the church, who raced down the road towards the farmhouse to raise the alarm. The Indian Cavalry Club (played by me) approached from the east, heading towards the farm fence between the barn and the death ray. Hearst’s men jumped the fence on their side of the building and stormed the farmhouse – only to find it was unoccupied. However, they did find the Professor’s notes – one of four victory objectives. The others were the blueprints for the ray, the death ray, and the professor himself, captured dead or alive.

The shooting started almost immediately as the cultists began firing on the farmhouse, or charging towards it with burning torches. The shooting was actually a three way exercise, as by now the Cavalry Club had worked their way along the fence beside the barn, and were blazing away at cultists and Hearst’s Rangers alike. Casualties began mounting on all sides. The Cavalry Club sapper was armed with a Congreve Rocket Gun – a sort of rocket-propelled grenade launcher well ahead of its time. That’s the sapper in the front right of the picture above. Dougie Trail still doesn’t know I sacrificed one of his WW1  figures – a chap carrying a Vickers gun – and added bits to the weapon to turn it into the Congreve apparatus. Still, Trail owes me after losing my lead. Anyway, the sapper began firing at the corner of the farmhouse. It took two shots before he got it right, killing the Rangers’ deputy – a gunslinger – and a Ranger armed with an “arc pistol”. That’s a pistol which effectively fires lightning bolts, using power supplied by an “arc generator”, carried by the chap in the top hat in the gang below, cunningly converted using bits off a broken disposable lighter.

In the farm courtyard the cultists were clearly getting the worst of the exchange of fire, as by now several of them had been shot. In theory the Ranger’s secret weapon was the Patent Steam Thrower – a flamethrower of sorts, that fired off jets of high pressure steam. That’s it down below, carried by the guy in the bowler hat. It – like the arc pistols – proved singularly less effective than the carbines and military rifles carried by most of the other protagonists. Actually the Calvary Club’s secret weapon was Hedley – the loyal manservant to Captain Caruthers, who spent the battle carrying around what looked suspiciously like a bottle of gin on a tray. The Caruthers figure didn’t need him – he was drinking Earl Grey from a cup throughout the battle, pausing occasionally fire a pistol at the farmhouse.

So, Hedley the gin bearer served as the medic, and was used twice, to revive the same Sikh rifleman who was shot two times by the cultists, and revived thanks to Hedley’s talents – or his gin. Meanwhile Captain Styles commanding the Rangers grappled and killed a cultist trying to torch the building, while the rest of his rapidly depleting company fired at the Indian cavalrymen. At that point a Sikh smashed a window at the side of the barn and clambered in, fighting off an assault by Marius the cult leader as he did so. There he found the blueprints-  the second of the two victory objectives. That left the professor. He was standing at the door of his log cabin control centre, and by now he had realised things weren’t going to end well. So, leaving Marius and the last cultist to their fate he ran back into the cabin, detonated the self destruct button on his death ray, darted out the back door and fled the scene in his “ornithopter”. As he flapped away to safety the two companies were left to count the cost. Both had one victory objective apiece, and with the professor gone and the death ray destroyed that meant the game was effectively a draw. Both sides decided to cut their losses and slink away, before the local police turned up to see what on earth was going on.

So ended the first (and possibly last) foray into the world of “Steampunk”. We used Ospreys In Her Majesty’s Name rules, which definitely had their quirks, but which produced a fast paced and enjoyable game. The idea that each side gets to move a figure in turn, and then fire one in turn (the order based on initiative rolls) meant that there was no sitting around waiting for your turn. The game could have gone any which way, and we’ll certainly try the rules again, and either  give these companies another airing, or blood new ones. Chris plans to raise his own company, and this time he’ll probably miss out the largely useless arc pistols and patent steam thrower from their arsenal. For my part Caruthers and his manservant Hedley will certainly make another appearance, but probably in their rightful arena – a historical game set in the North-West Frontier. After all, a leader who drinks tea during a battle is just too cool to leave out of the fray!

Tags: In Her Majesty's Name