Who would have thought it! A year into this bloody pandemic, and we’re still doing Lockdown Painting posts! Strangely, this is a painting project I never expected to tackle. You see, I thought I have enough Cossacks. I’ve got about fifty of them – mounted figures – which I mainly use to support my Russian Napoleonic army. They’re Foundry figures with bags of character, and while these are really Renaissance figures, they work perfectly well for the less uniformed Cossack elements in the later Napoleonic Wars. I actually had more Cossacks with more of a uniform look to them, but I sold these recently, leaving me with my one-period-fits-all ones. 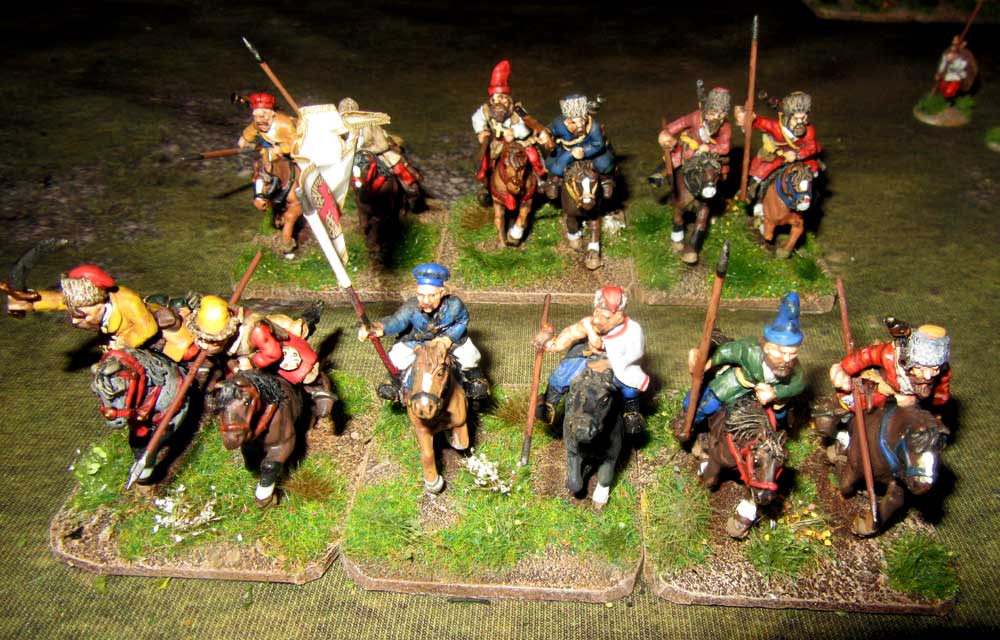 This little painting project came about thanks to my friend Lindsay.  Out of the blue she decided to build a Renaissance Polish Army. My pal Gyles who lives in the neighbouring island then opted to match these with the Swedes – the Pole’s classic opponents from “The Deluge”. So, I started thinking. What could I raise as a stake in this new Eastern Renaissance period?  I thought about Muscovites – I have a soft spot for the look of them in this period. Then I remembered my one-period-fits-all Cossacks. 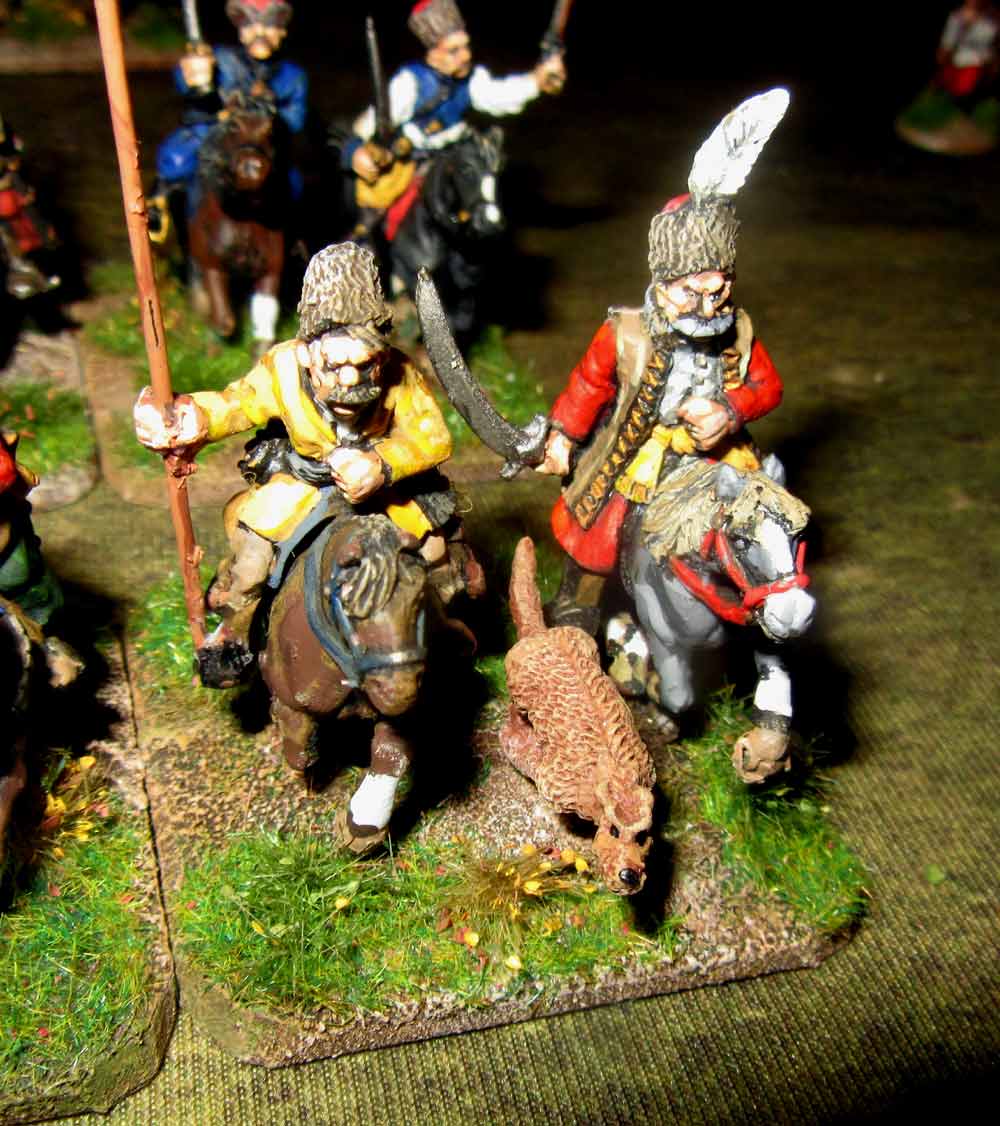 I dug them out, and saw they needed freshening up. It’s been over two years since my toys suffered smoke damage, and apart from a quick steam clean the Cossacks hadn’t been tarted up. So, that’s exactly what I did. I also rounded the corners of their bases, to make them look a bit more suitable for skirmish-level games, and apart from a repaint and a re-tuft I also added missing lances and flags. 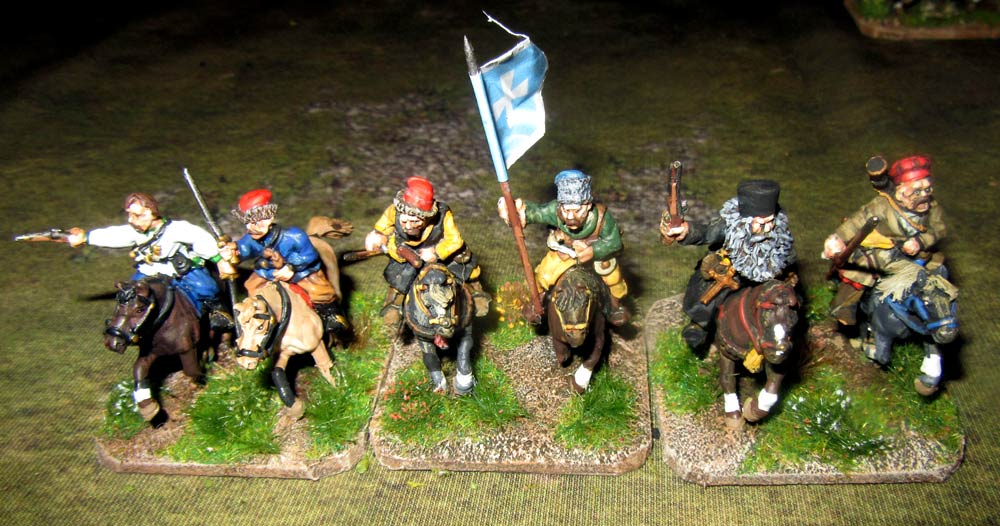 That gave me enough cavalry for eight 6-figure units for The Pikeman’s Lament, our preferred rules set for the period. It also left me with better-looking four 12-figure Cossack units for my Napoleonic games. The next problem was the infantry. Then I remembered. Somewhere deep in my lead mountain was a pack of Old Glory Cossack musketeers. I’d bought them at a show several years ago, and never did anything with them. So, I dug them out, and painted them up. That gave me 30 figures.

I just needed 6 more to make up three 12-figure shot units. So, I got the extras from Foundry, who do the best-looking Cossack infantry I’ve ever seen. Actually, in the end I got some Essex ensigns, and a few extra Foundry figures. The Old Glory figures are functional, but not too inspiring. All it took though, was the odd other figures in each unit to really pop them out. 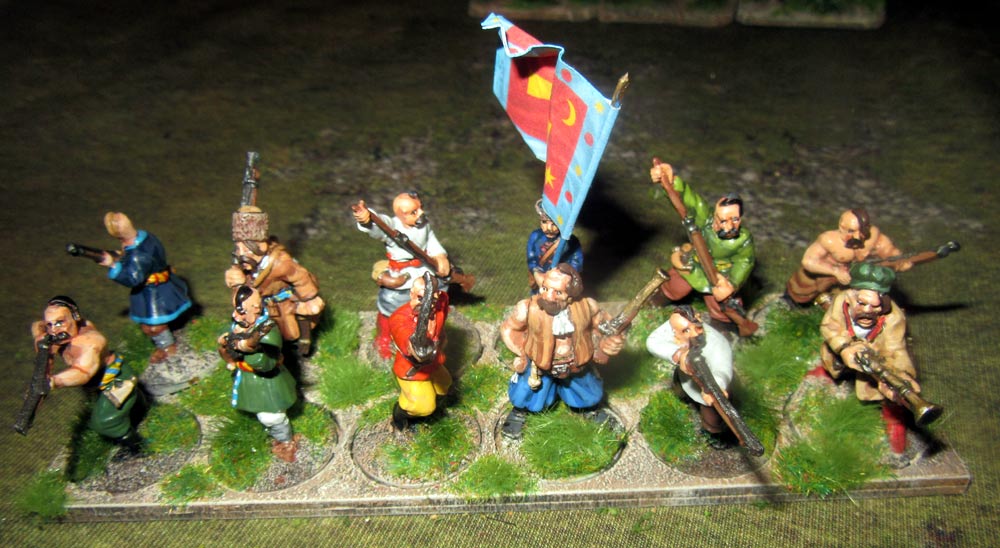 In the end I had enough for three Shot units, plus the unit of six Commanded Shot pictured above. That included the Old Glory ones  -0 all Zaparoooozhian Cossacks with shaved heads, Essex ensigns, and another Foundry figure – a pirate converted by adding a moustache and a top knot to his bald head. So, that was a pretty good start. 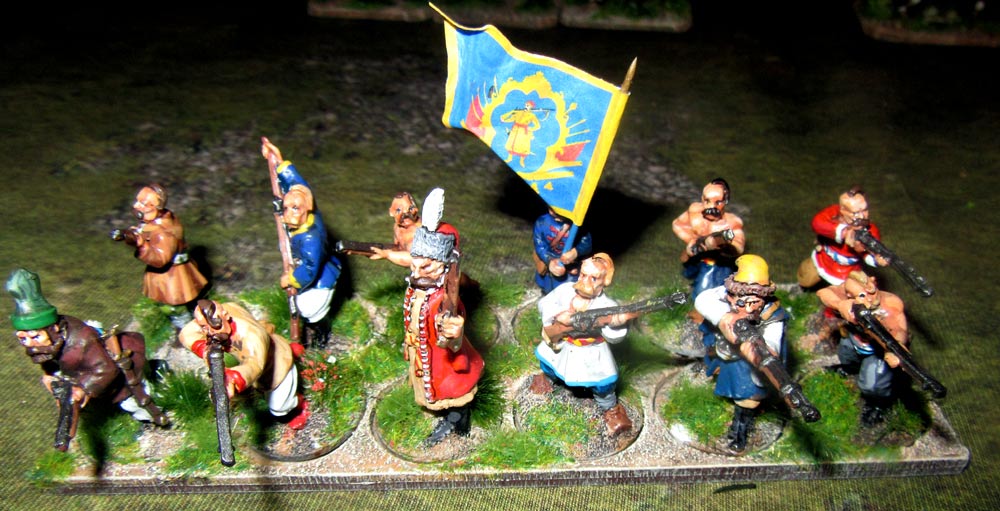 Next, I needed pikemen. I got four from Assault Group, and eight cheaper ones from Essex. The Assault group ones are nicer, but the Essex figures are perfectly functional. The aim was to have the nicer figures at the front, but thanks to the steeper angles of the pikes they had to go at the back instead. Still, it was a nice little unit, and probably the only one that can stand up to Winged Hussars. Incidentally, I’m still planning to put them on a sabot base.The gifted Paul at Sabotag3d is making some for his own  range of bases, so once they come out I’ll be all squared away. 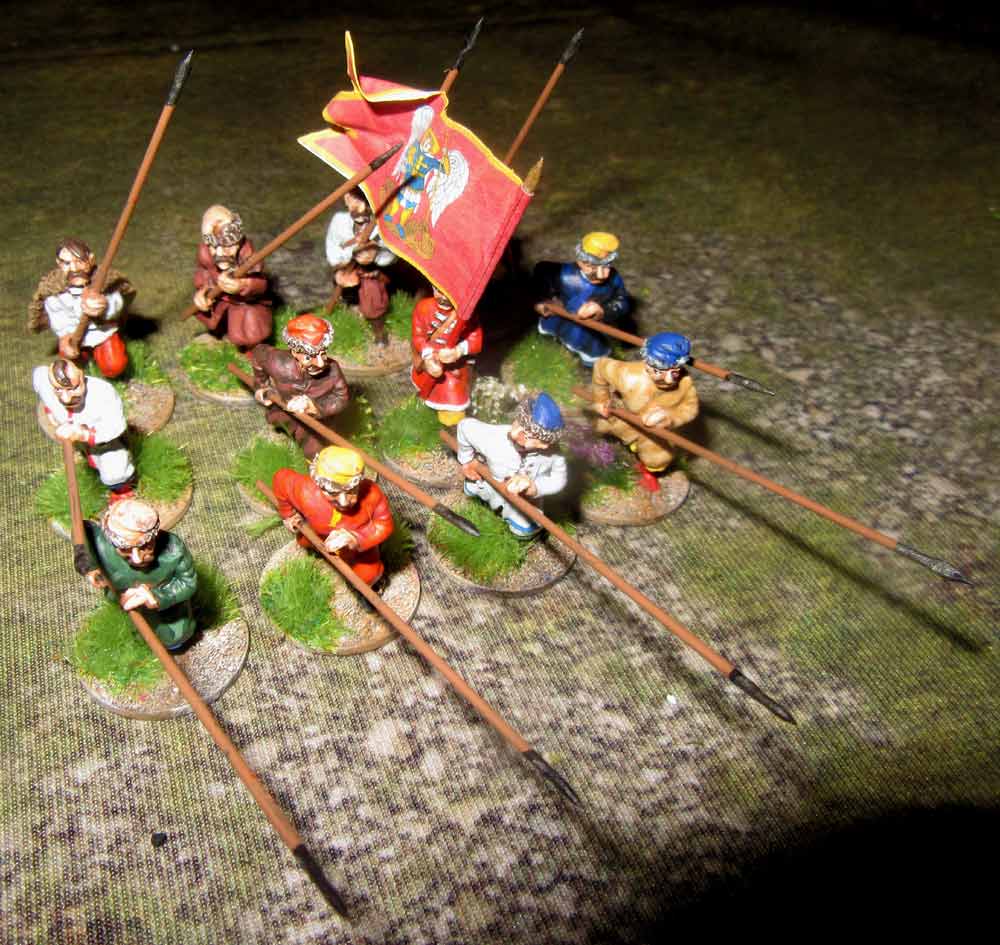 In order to get the Foundry musketeers I had to buy two packs, which meant I had a few sword and pistol-armed figures left over. So, my next unit was a Forlorn Hope – a unit of six hard-nuts ready to charge into anyone willing to stand up to them. They came out pretty well too, but again it needed an OId Glory officer and a converted pirate figure to make up numbers. This time all I had to do was to give him a fur hat. 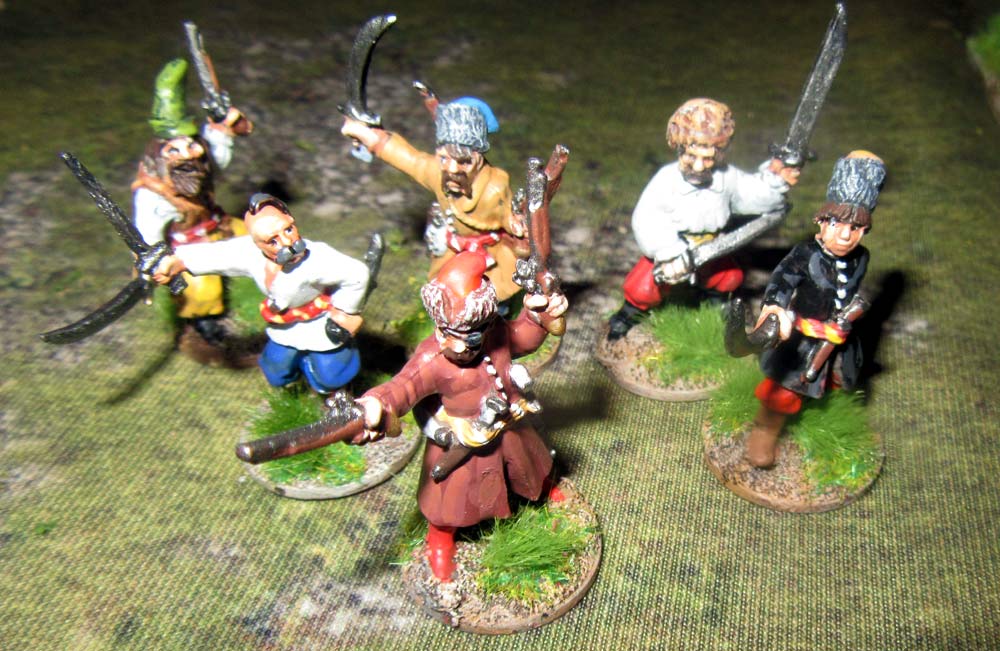 The final unit in the force was an artillery piece. In The Pikeman’s Lament you get a regimental artillery option. Being Cossacks though – and having watched Fire & Sword – I decided my guns had to be carried around in a wagon. So, I found an unbuilt one from Warbases, and a couple of swivel guns from a long abandoned pirate ship project. I added four “labourers” from Assault Group, plus two more unmodified pirate figures, and hey presto – a Cossack gun! A couple of the gunner’s eyes need to be redone though. 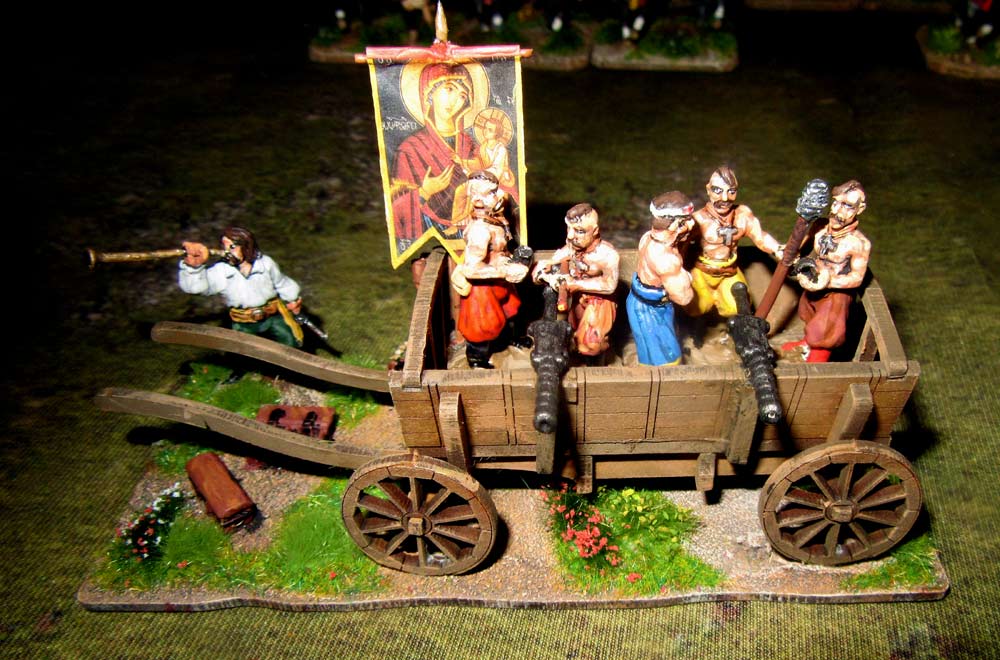 The flags by the way came from online – I just googled “Cossack Flags” and there they were, produced by 1-72 Depot.com. All I had to do was to resize them and print them out. So, in The Pikeman’s Lament a typical force is 24 points. After totaling this lot up I realised that I had a lot more than that. Even by reducing my cavalry to five units of 6 figures, I have enough for a 48 point army!

That’s more than enough – so let’s hope Lindsay is planning top paint up a lot of Swedes! Mind you, her winged hussars will be kick-arse, so I can expect to get rolled over fairly quickly. My cavalry though, can evade, and skirmish, so we don’t intend to fight fair.

So, there we have it. For those who care about these things, we have five units of 6 Cossack horse (classed as dragoons in this), three units of 12 shot, 1 unit of 12 pikes, 1 unit of 6 forlorn hope, 1 unit of 6 commanded shot and a regimental gun. That’s 96 figures in all, plus a priest, just for kicks. It’s assuaged any desire I have to paint Cossacks for a while, although I still have a dozen of my “Napoleonic” ones to retouch. Still, that’ll have to wait. I need a break from moustaches, loud clothes and fur hats for a little while! 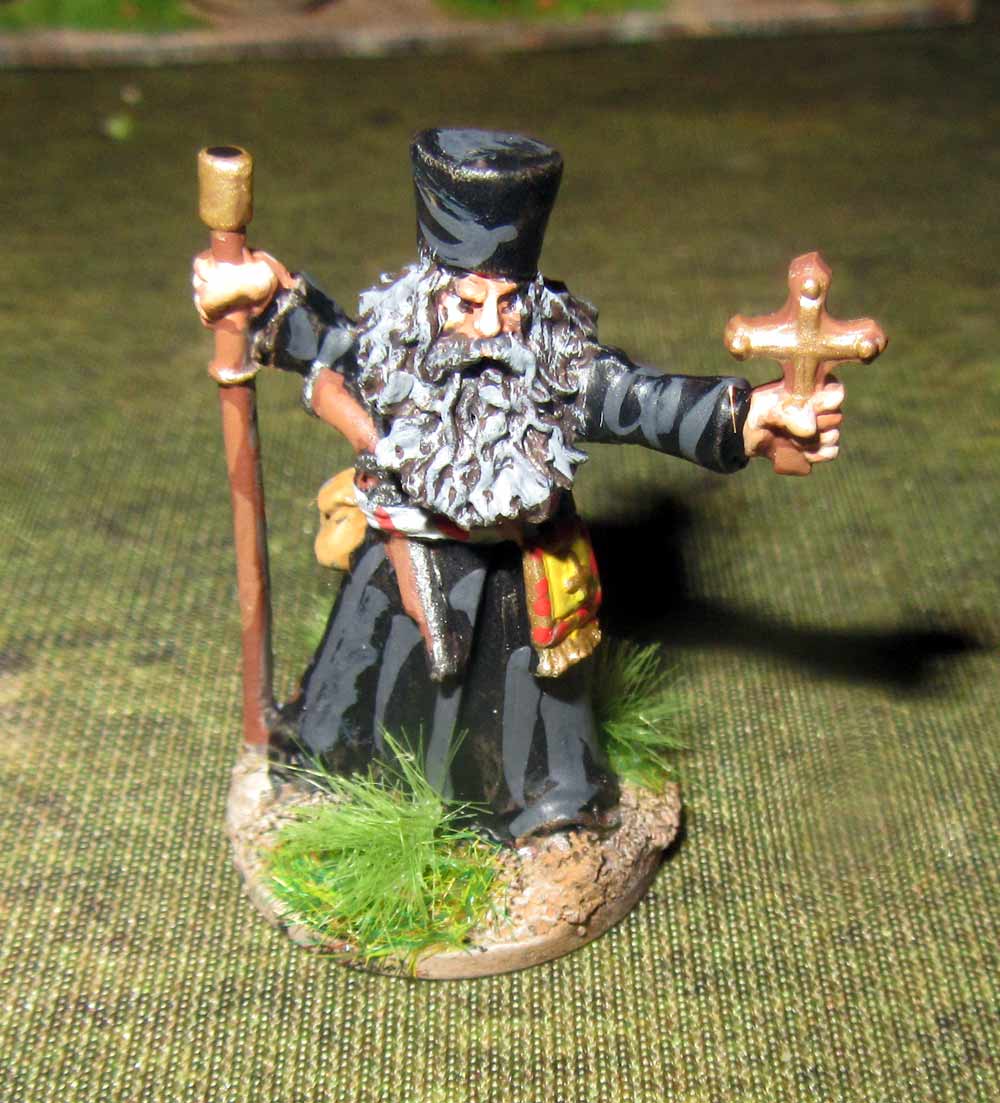