For this game we needed three players, and had the luxury of five. This large-scale skirmish was all about plunder, and was set in the Cossack Revolt of 1648. During the fighting, both the Poles and the Cossacks learned that in the village of Zhytomir there was cattle and grain for the taking. All they had to do was grab it. So, both sides sent a force to plunder the place. The locals though, not only armed themselves, but they also hired a unit of 12 mercenary Cossacks to help – the Chudiva Dyuzhina (Magnificent Dozen). 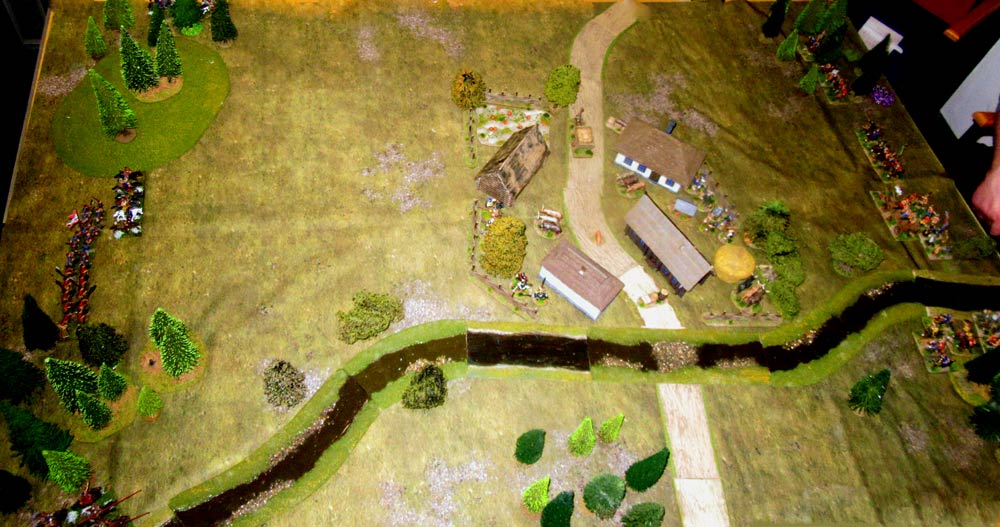 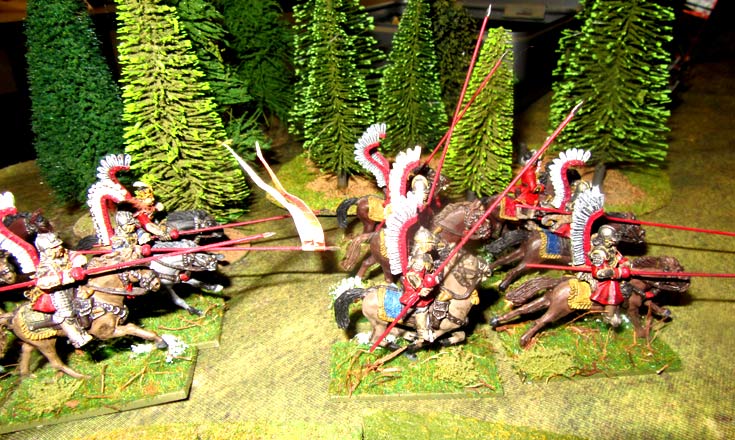 In each corner of the village was a forage marker – three of cattle, and the fourth being a cart loaded with sacks of grain. The villagers were deployed in Zhytomir (two units of 12 armed vilalgers), while the Chudiva Dyuzhina were due to appear from the south, beyond the river. Then, with the locals in place, the rapacious Poles appeared on the western (short) table edge, and the Cossacks arrived on the eastern one. So, everything was set for a three-cornered fight – or rather a plundering, with some fighting thrown in! 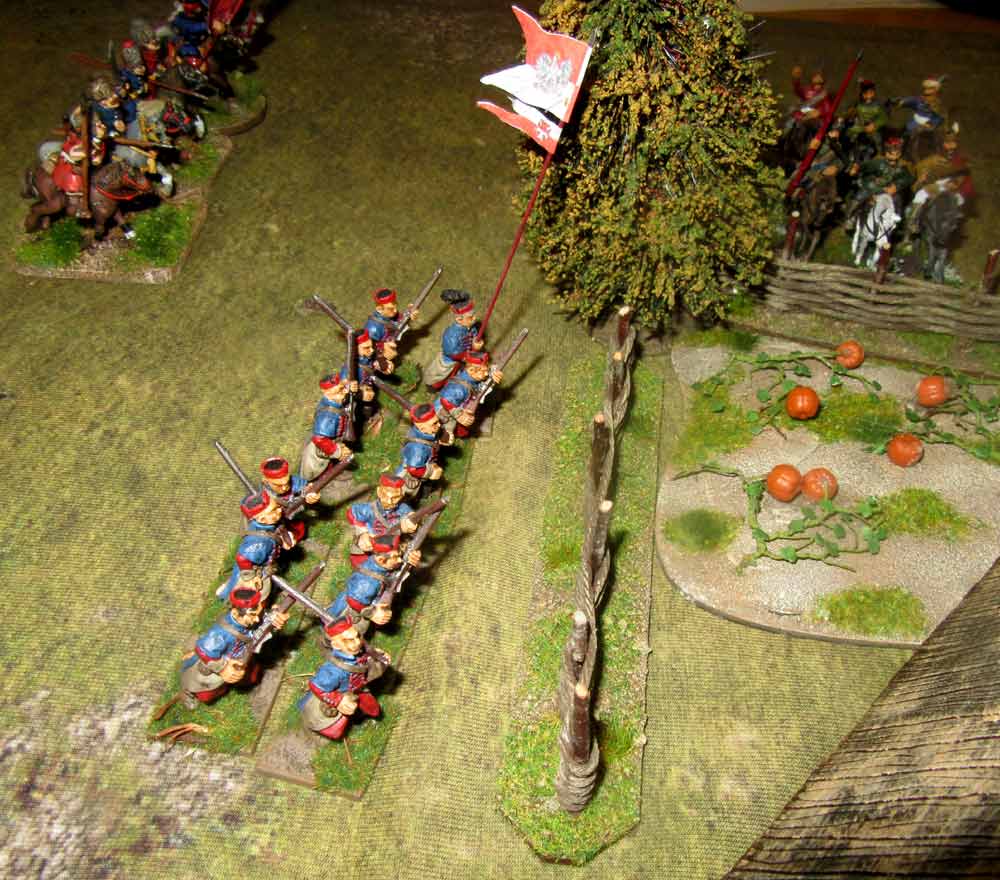 Lindsay is a tanker at heart, so the core of her Polish force was three units of elite Polish Winged Hussars. The rest was made up of units of Croat horsemen and Haiduk foot, some of which carried big axes. We went for three units of veteran mounted Cossacks (which used the “Dragoon” stats”), plus two units of 12 Cossack shot, a small 6-man forlorn hope and a war wagon with swivel guns. 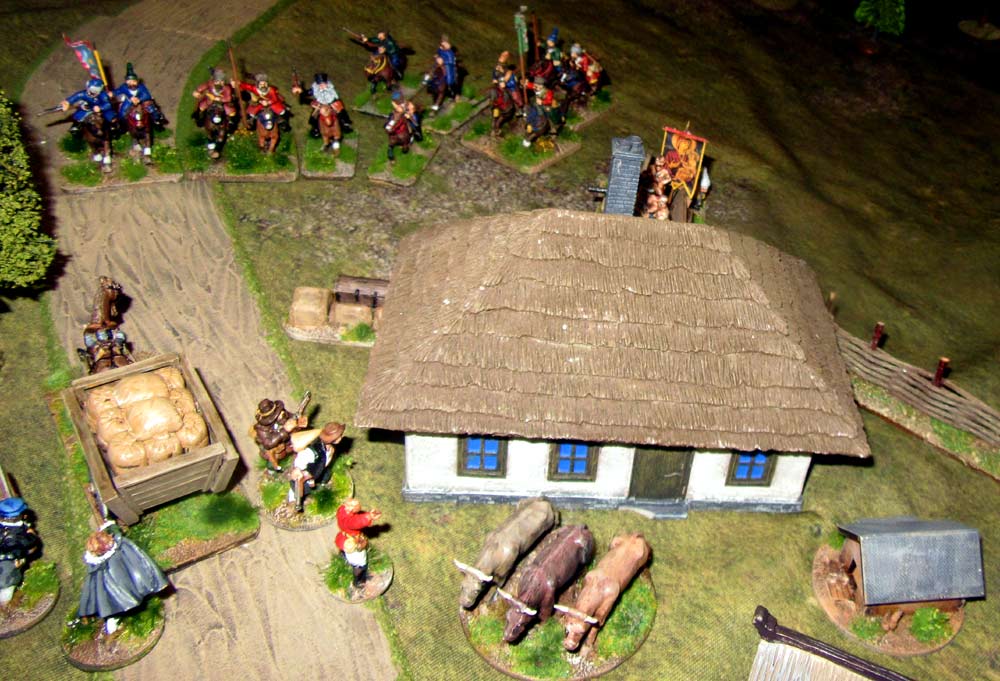 The first few turns were taken up with both sides advancing on the village. The Poles had trouble getting activated – both Mally and Lindsay failed early activation rolls. So, the Cossacks reached the village first. The two units of villagers were massed on the north and west sides of the place, and began scrapping with Shane’s mounted Cossacks who were at the northern entrance to the place. 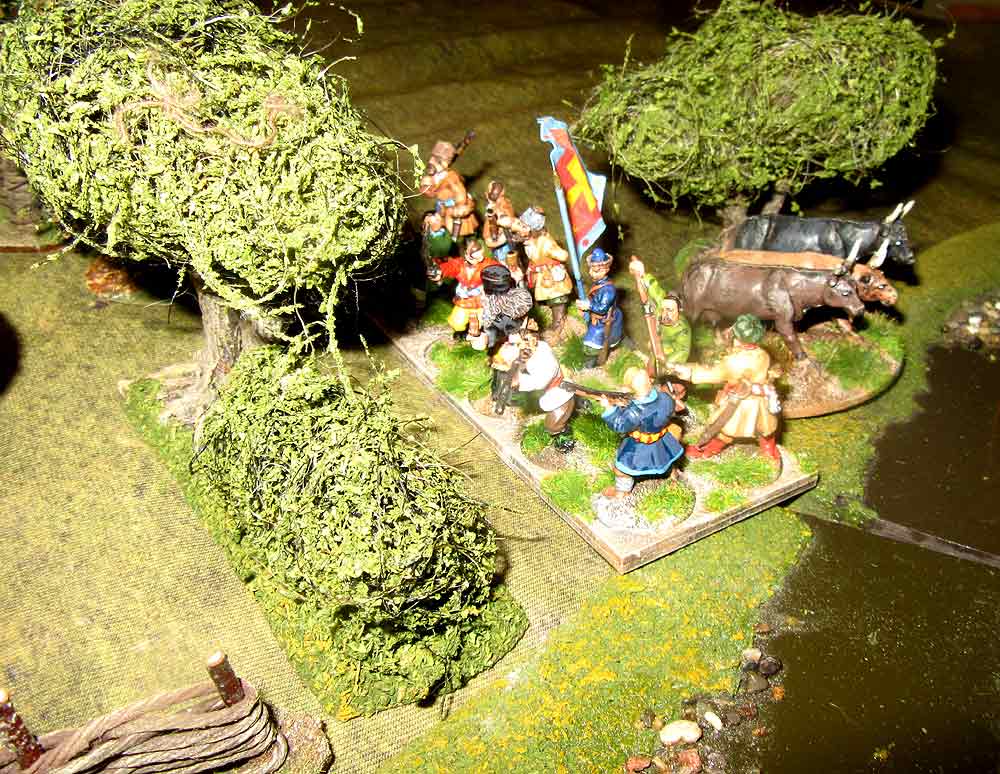 Then the Chudiva Dyuzhina appeared at the southern table edge, racing for the ford and Zhytomir beyond it. They had to pass through the fire of the Cossacks though, and took three casualties before they reached the safety of the buildings. Meanwhile, another unit of Cossack shot had sneaked up to the south-eastern corner of the village, and snatched a forage token – three tasty-looking cattle! 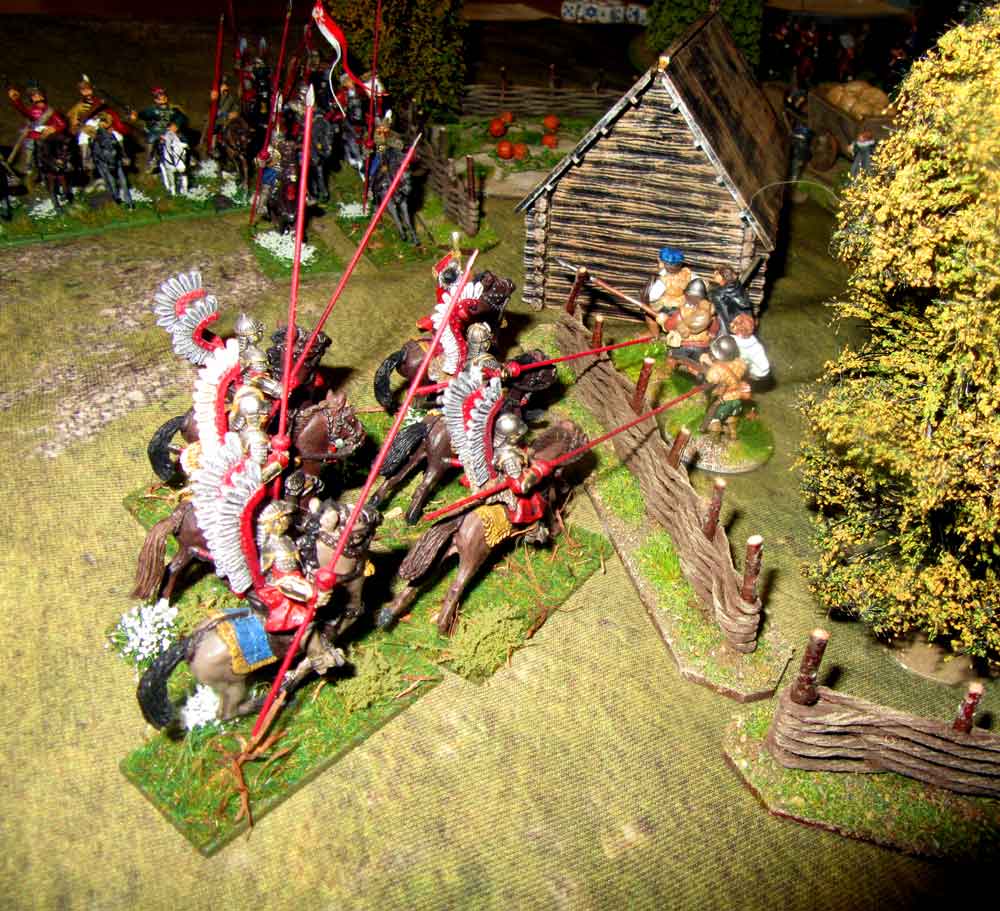 The Cossack attack at the northern end of the village was a bit lacklustre – it whittled down half a unit of villagers, but it didn’t break in. More importantly, by now the Poles had arrived. Lindsay’s leading unit of winged lancers charged the village’s defences, and got stuck in to the second unit of defenders. The result was fairly predictable, and the few surviving locals were driven back. 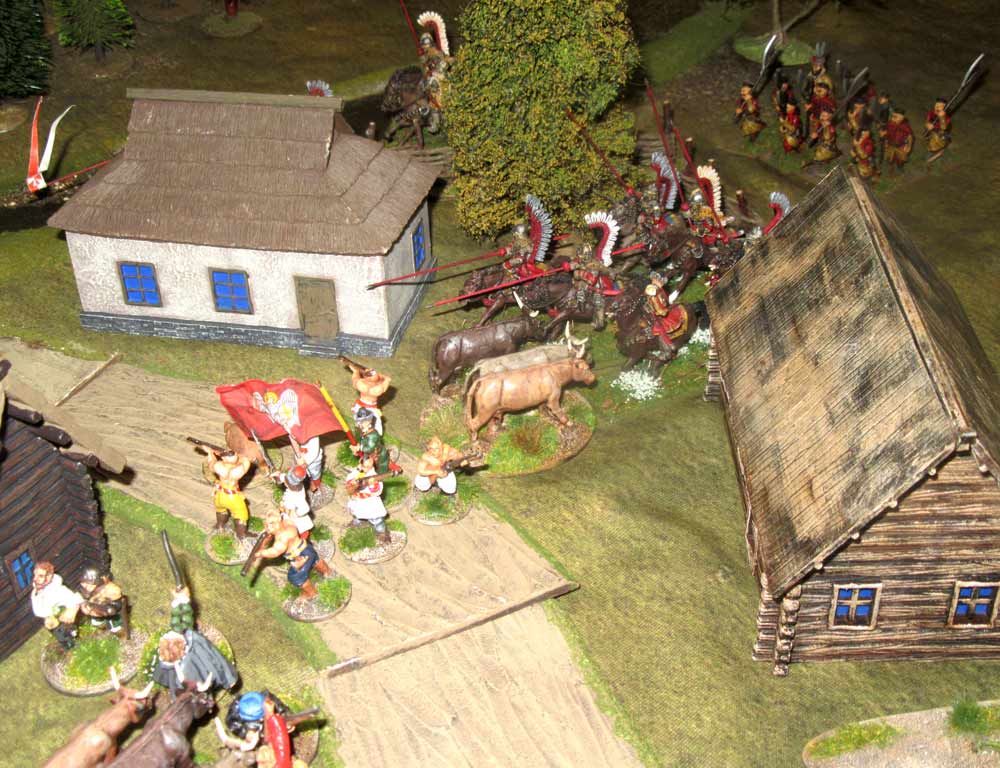 On the next turn the Polish winged hussars piled into the Chudiva Dyuzhina. They put up much more of a fight, and they made good use of cover, which gave them an extra defensive boost. In the end though, half the lancers were killed, but the magnificent dozen were now at half-strength too. It looked like the Poles were on a roll, with the two other lancer units about to join the attack. 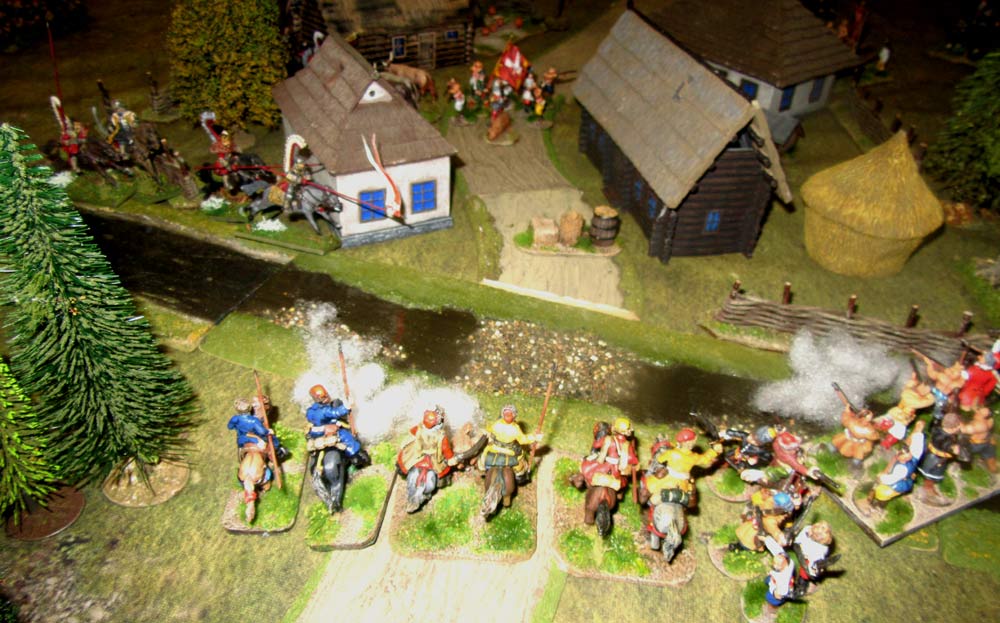 In fact, the Poles to the south came unstuck thanks to their disregard for the Cossacks. Shane who commanded the Cossack’s mounted troops had decided that skirmishing from horseback was the way to go. So, that’s exactly what he did, and rolled well. So too did my supporting unit of Cossack shot, while my forlorn hope stood ready to wade in if anyone was charged. 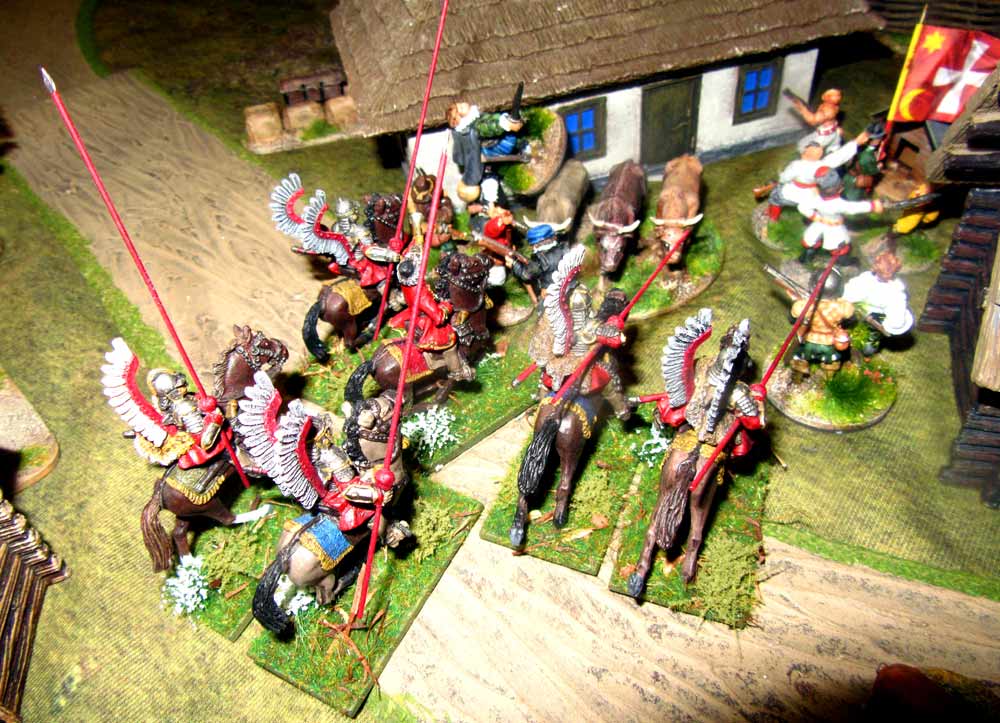 So, another Polish hussar unit was now at half strength. Doubling down, Lindsay charged the mounted Cossacks, who just evaded and shot again The result was the wiping out all but two of winged hussars. Lindsay wasn’t to be outdone though, and charged the last of the villagers and Chudiva Dyuzhina. At that point, in true Hollywood fashion, Sean’s Yul Brynner character challenged the Polish noble leader Baron Frenkel to a duel – and won! 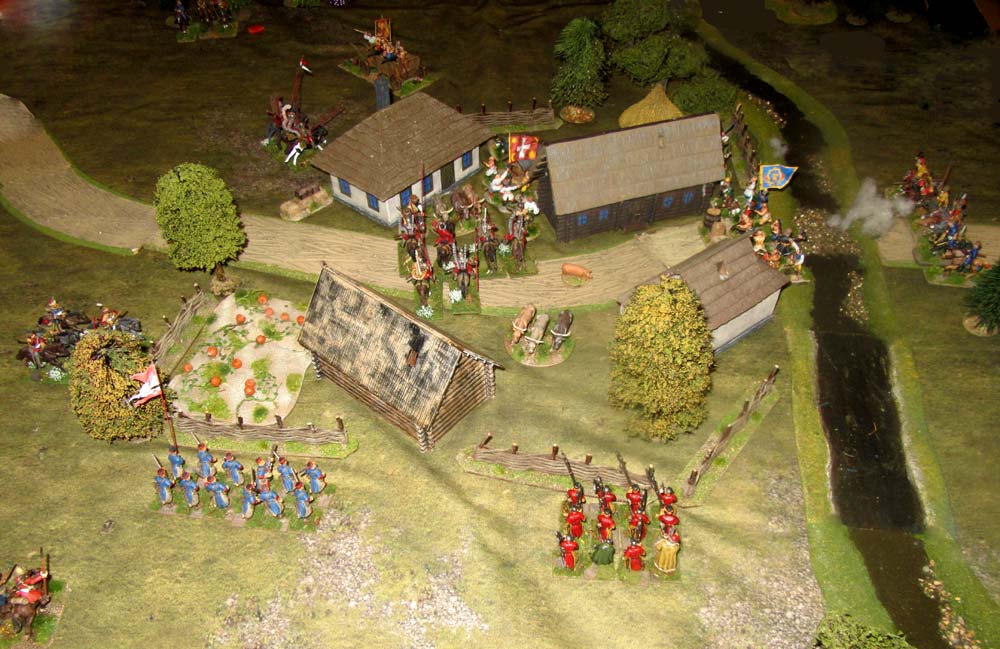 That effectively saw off the last of the Polish winged hussars in the village – and tall but two of the Chudiva Dyuzhina. It was now all over bar the shouting. The Cossacks were either heading off with their plunder, or in the village, while Mally’s Polish infantry and Croats were only now at its western edge. A last charge by the remaining unit of winged hussars to the north almost wiped out the Cossack gun wagon, but it survived, and helped cover the withdrawal of the plunderers. If the game had gone on the remaining Cossacks and Poles would have fought over the two tokens left, but we decided to wrap up the game there. So, the Cossacks won, escaping with half the forage, while the rest was still up for grabs – thanks to the legendary exploits of the Chudiva Dyuzhina! 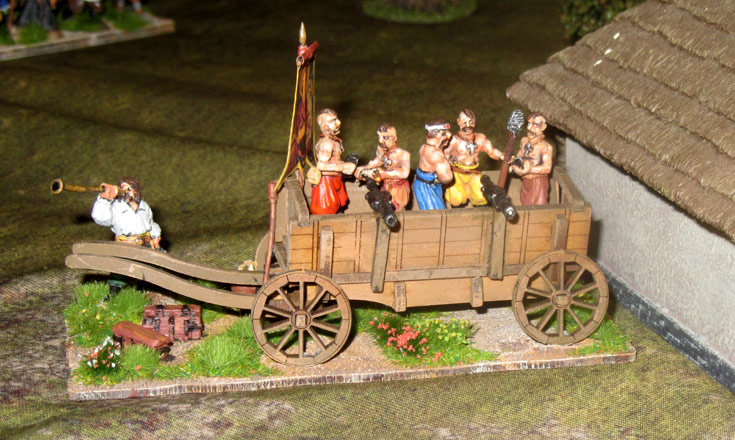 The High Road to Zaporizhzhia, 1648