This week we were off to the 17th century Ukraine. Lindsay had been painting up some Renaissance Poles – mainly glitzy winged hussars – while I’d augmented my mounted Cossacks by adding some more on foot. There were going to be four of us for this game, but Gyles was grounded before the game, so it was just Lindsay, Mally and I on the night. The game was based on a scenario drawn straight from the rule book called “Steak on the Hoof”. We played it out on a 6×4 foot table. 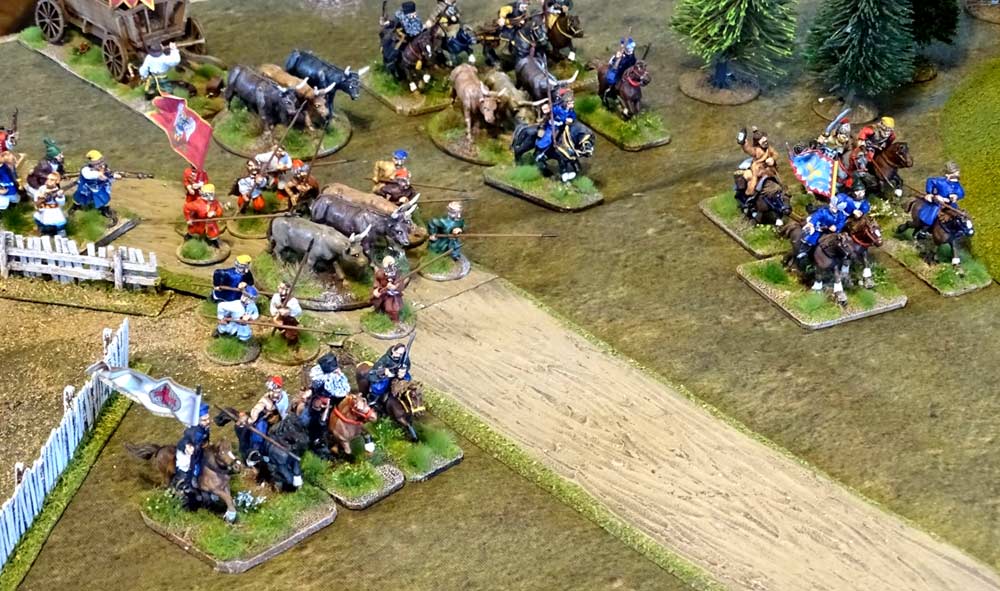 The game was set somewhere to the west of Kiev, with the Cossacks heading back stolen cattle. The Poles, victims of the raid, were out to stop them. The Cossacks were on the western (short) table edge, and had to get off the eastern end of the table. The Poles had a blocking force of Drabant musketeers (pictured below), while the rest – all cavalry – came on from the southern table edge on Turn 2. Lindsay took command of her Poles for the first time, while Mally and I divided the Cossacks between us.

We had four 6 fig. mounted units (rated as “dragoons”), a pike unit, a shot unit (both 12 figs) and a wagon with swivel guns. One of our mounted Cossack units were rated “veteran”, which turned out to be a good investment. Apart from the 12-man Drabant unit the Poles had no fewer than three units of 6 elite winged hussars, backed up by a unit of 6 veteran Croats or Polish-loving Cossacks or some-such. Essentially, it was a real match of Cossack quantity versus Polish quality! 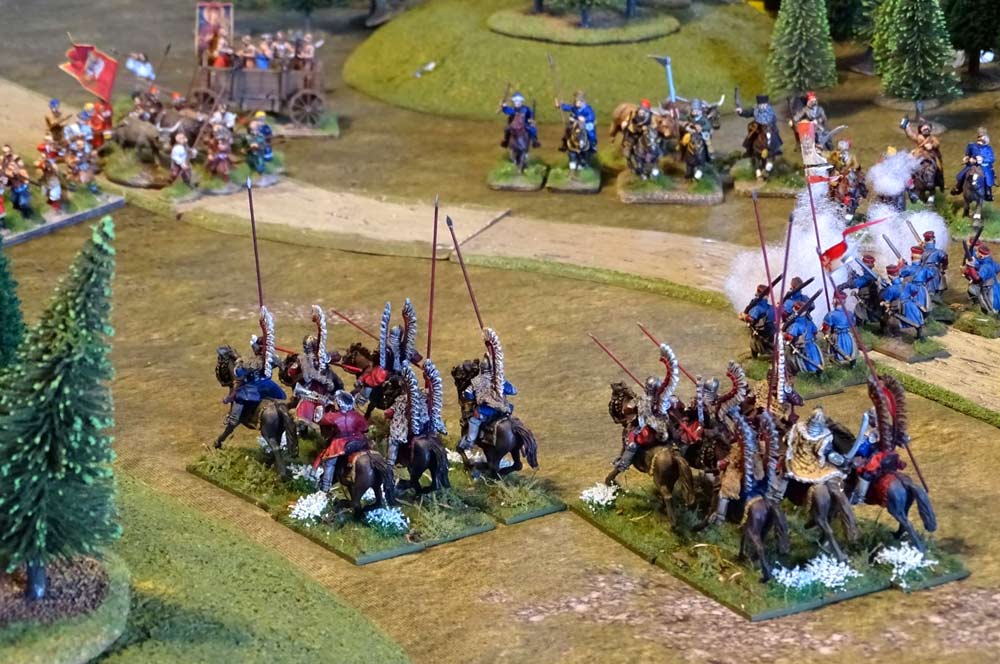 .The terrain was straightforward – a few low hills, patches of forest and a couple of farms, with a road running across the table from east to west. The one scenario specific rule we added was that the winged hussars couldn’t enter the forest. It Makes sense. 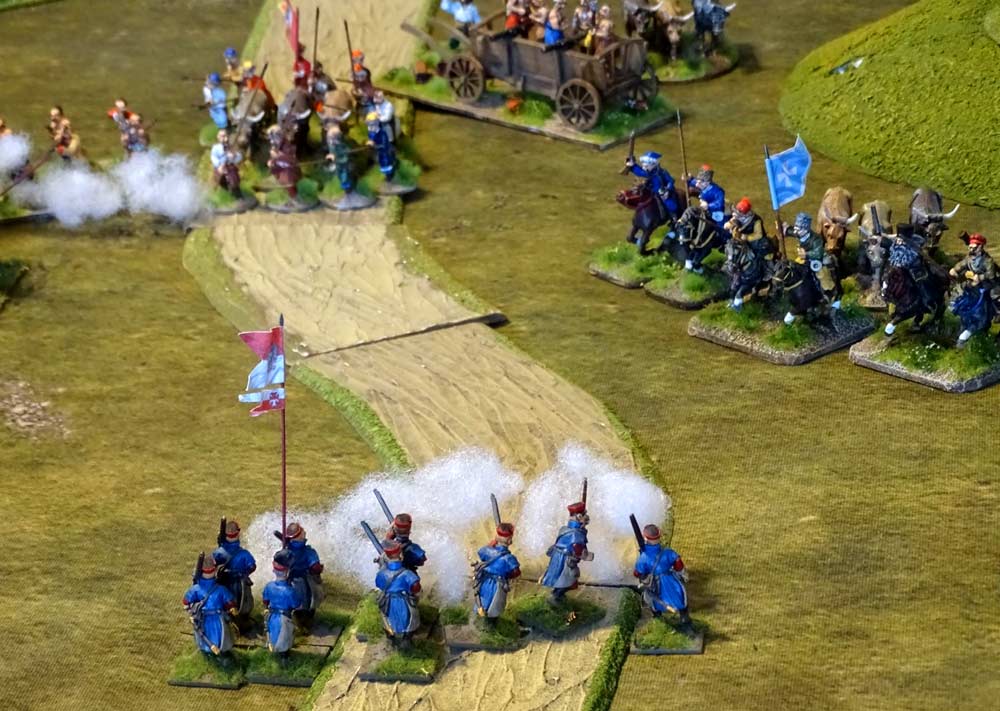 The Cossacks advanced cautiously towards the Polish shot, skirmishing as they came. The musketeers were veterans though, and gave a much better account of themselves than their horse-riding foes. We hadn’t actually got very far onto the table when the Polish cavalry arrived, on the southern table edge, to the left rear of the Drabants. 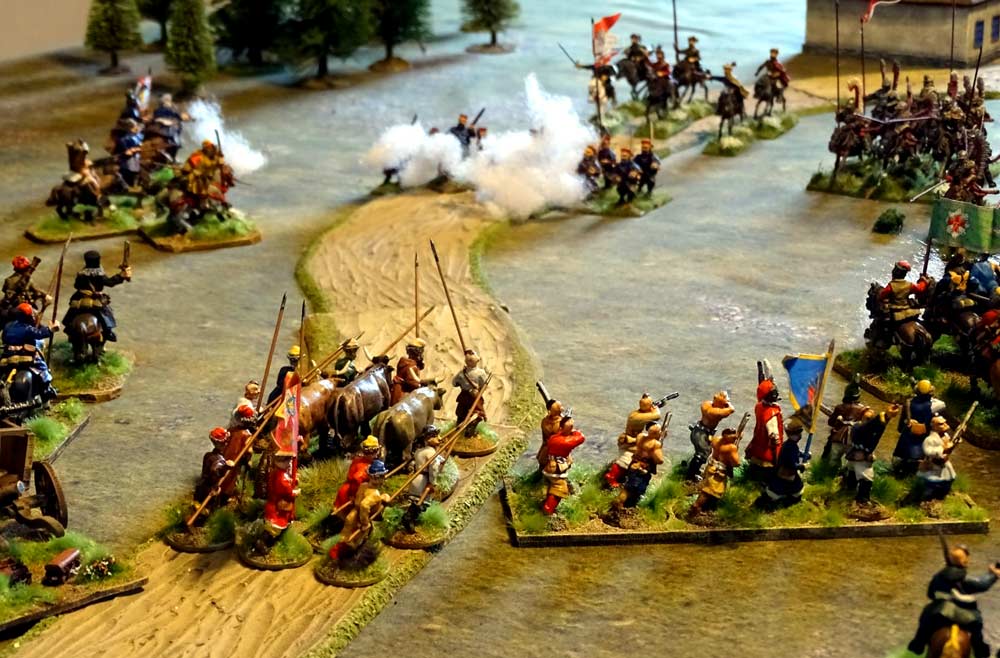 That of course changed the whole thing. You don’t mess with winged hussars! To the south, Mally had already suffered casualties, so was in no shape to take on a Polish charge. So, his mounted Cossacks hid in the southern forest, sniping at whoever came within range. On my side of the table I still tried to skirmish, working my way around the Drabants’ right flank. 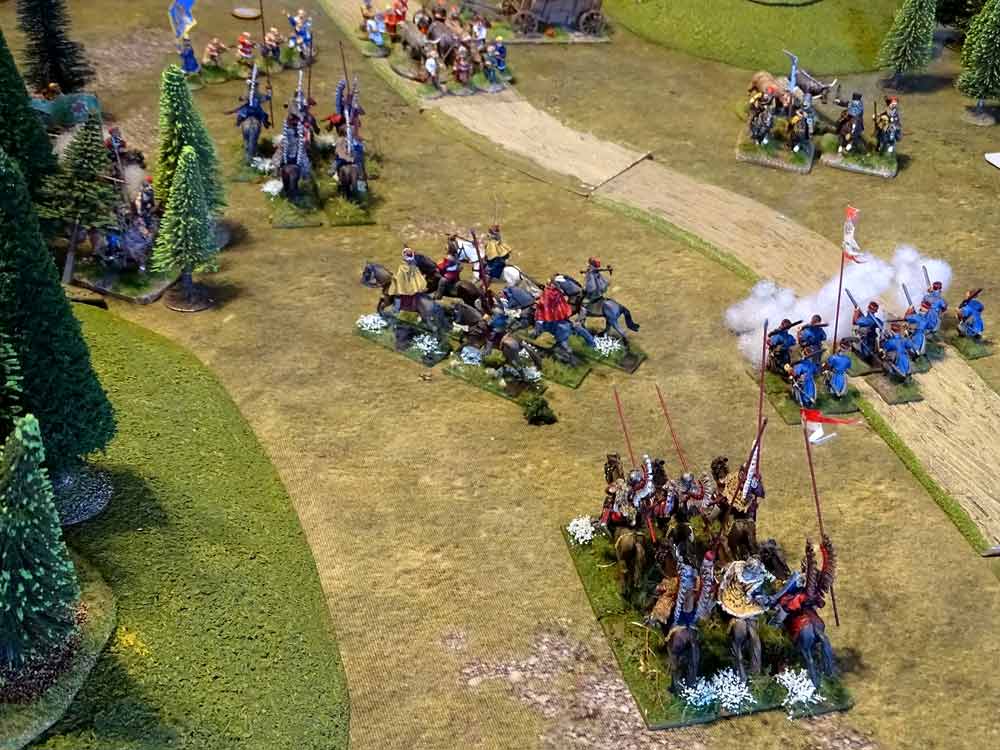 Once the winged hussars drew level with the Drabant’s right they launched a charge straight at the Cossack shot. Mally fired a volley which caused a casualty, but wasn’t enough to stop the riders. The result was fairly inevitable, with the lightly-armed Cossack musketeers hacked to bits, over the space of two turns. That though, was only the start. 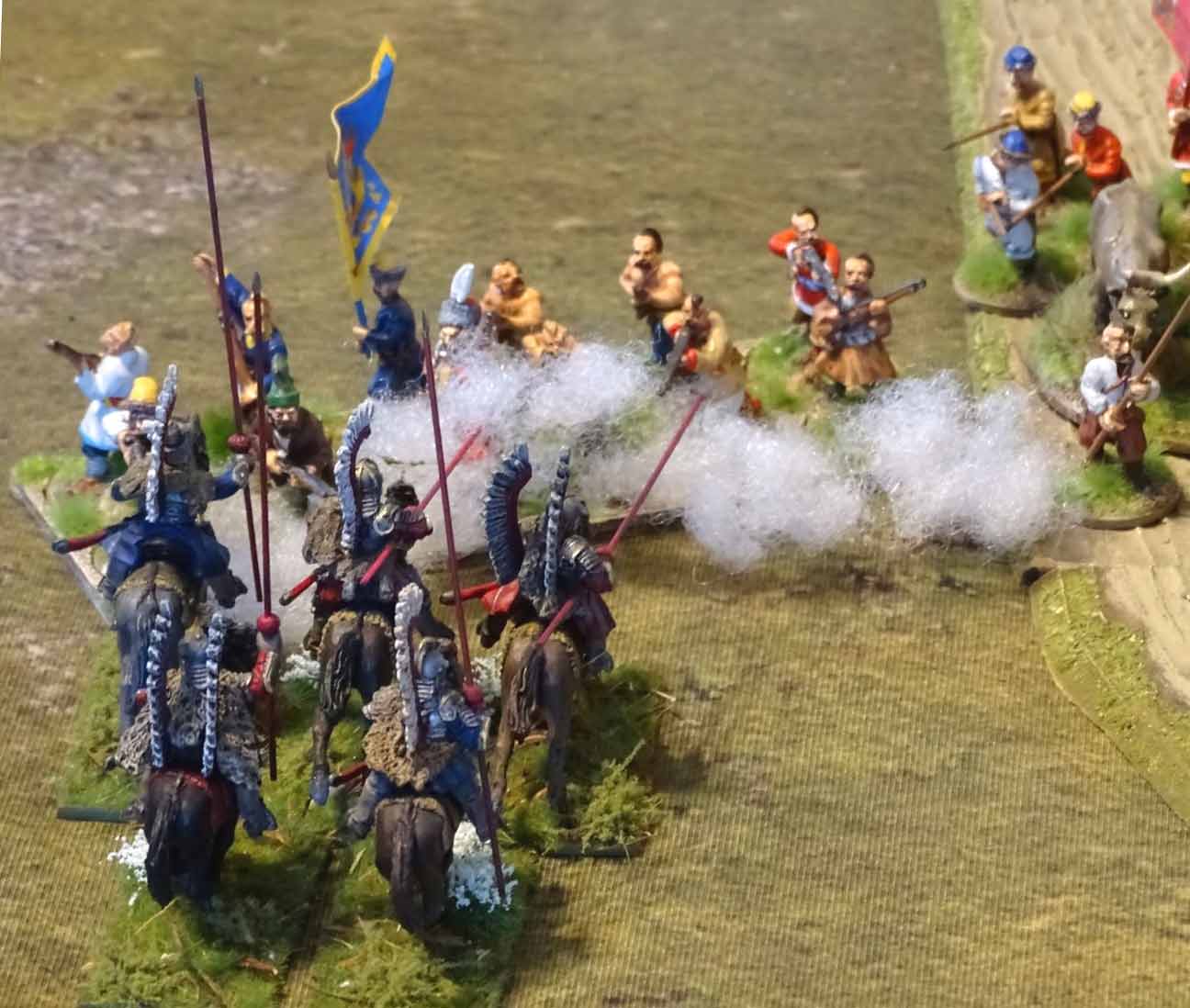 A second hussar unit swung across the front of the Drabants and then failed to activate. Actually, Lindsay forgot to move them for a turn. So, I had two goes at shooting them up with my wagon guns and my mounted Cossacks. Those  guns were pretty nifty, although with a stamina of 4, it means you need four hits to hill a hussar. The result was, that second hussar unit eventually routed, taking Lindsay’s commander with it. Uuurraaahhh!!! 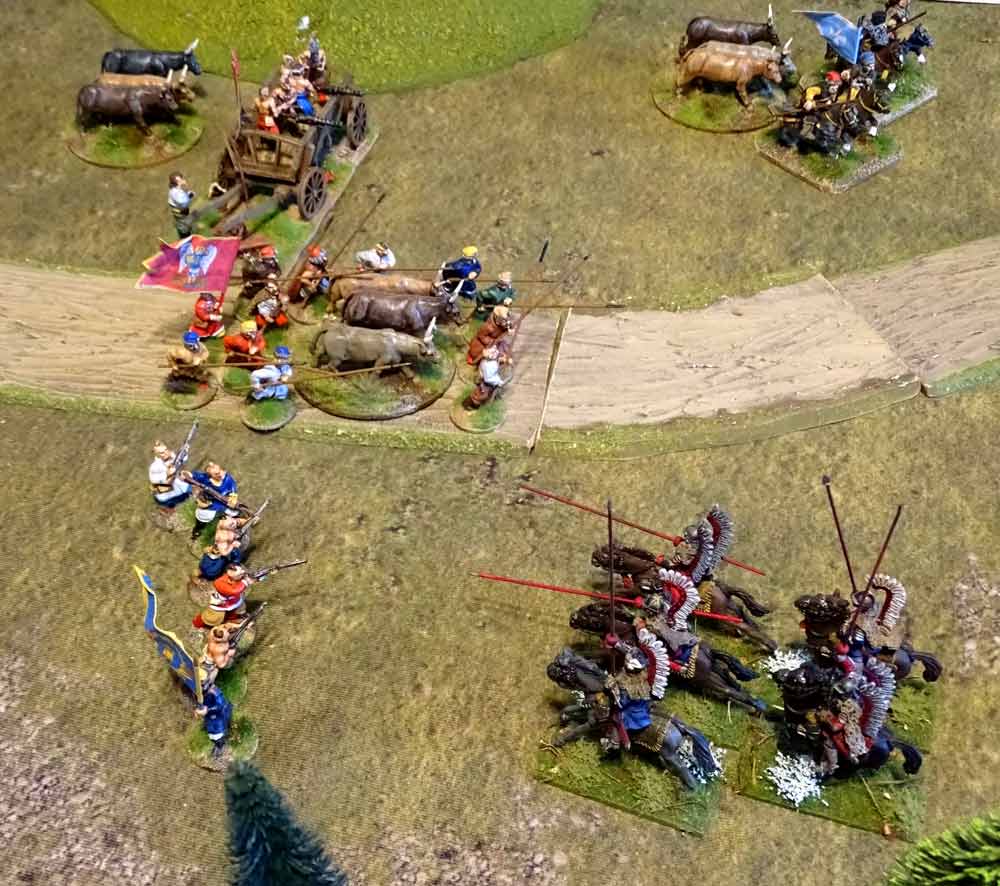 Unfortunately that turned out to be the Cossack’s high water mark of the evening. It went downhill pretty quickly. None of the Poles seemed to notice the loss of their commander. Instead they seemed to become more aggressive! Lindsay sent the Croats to winkle out Mally’s Cossacks skirmishing from the southern woods, but amazingly when the Croats charged in they were bounced back. The rest of the battlefield though, was emptying out very quickly. After seeing off the last of the Cossack musketeers (above) the first unit of winged hussars turned on the Cossack pikemen. 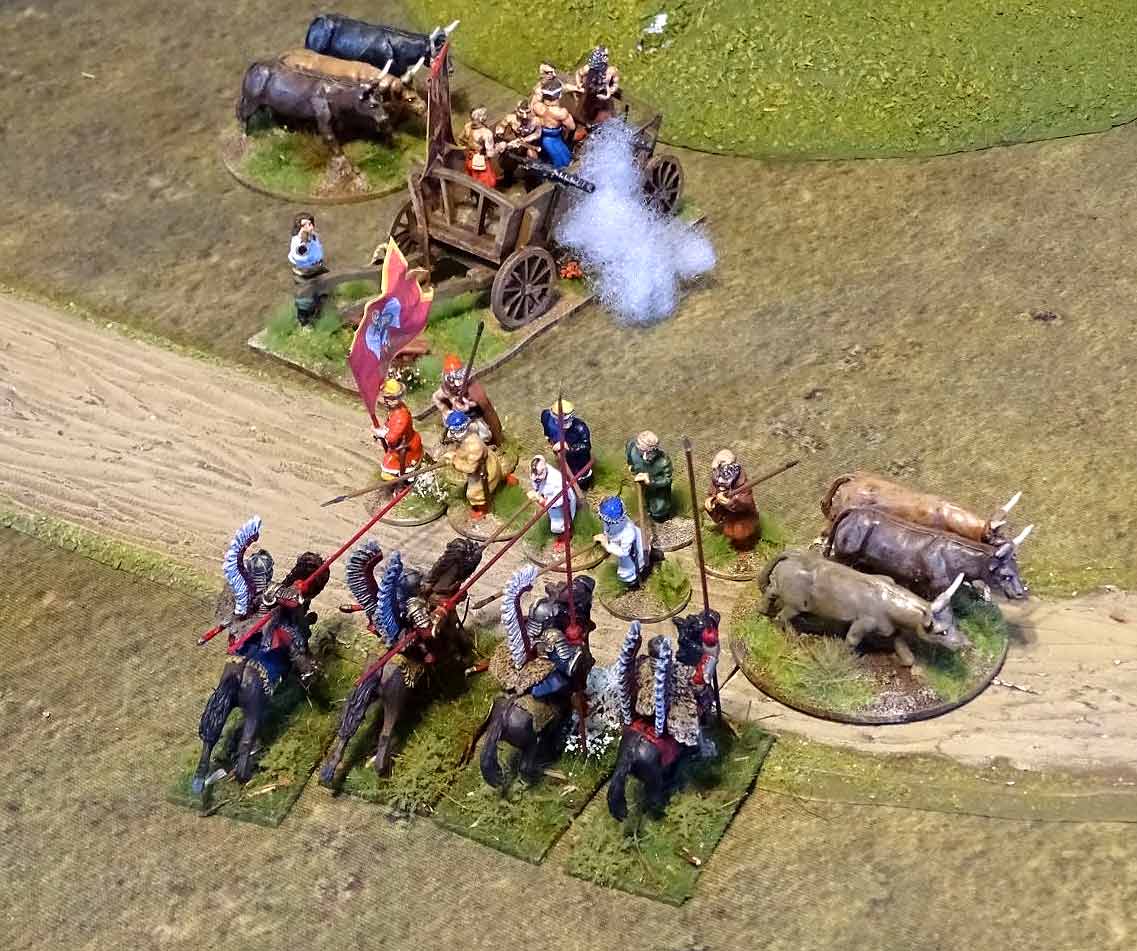 They held out for a turn, but thanks to being whittled down by those pesky Drabants the pikeman unit was now at half strength. So, it eventually broke and ran. The Polish hussars though, were now down to half strength – just three figures. The Drabants had also finished off the Cossack gun wagon, which tried unsuccessfully to duel with the Poles, and came off second best. 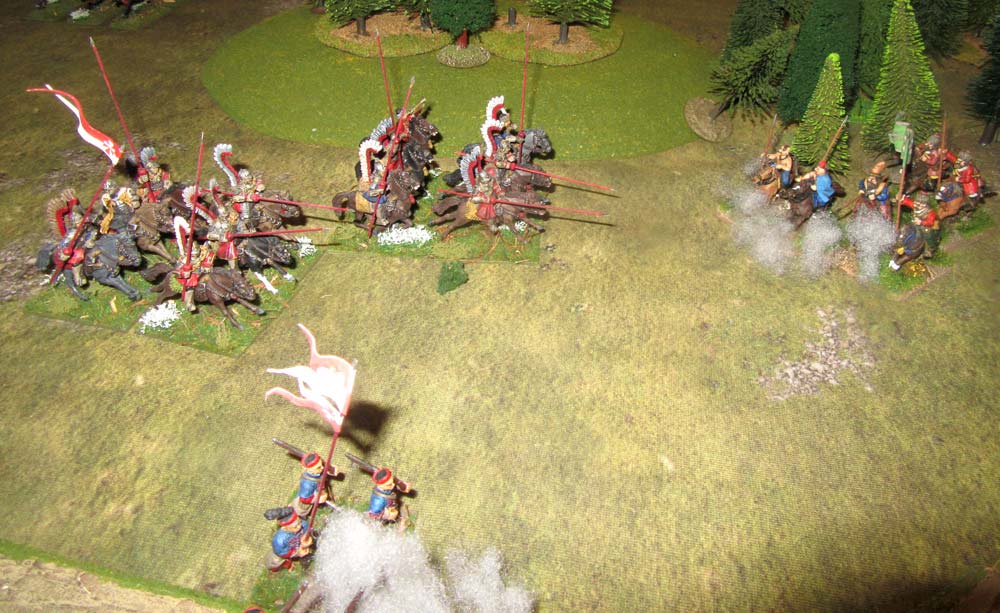 That was really it – Mally had two half-strength units of mounted Cossacks left in the south forest, and I had the same in the north. It wasn’t enough. So, we gracefully conceded – or rather rode off into the steppes, to lick our wounds and plan our revenge! It was a great little game though – colourful, fast-moving and great fun. I learned though, that Polish winged hussars aren’t to be trifled with! 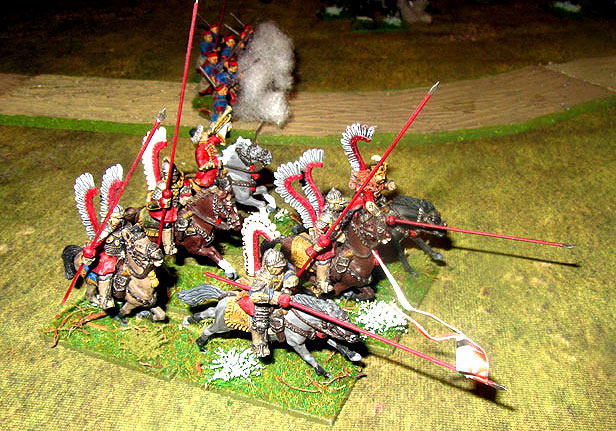