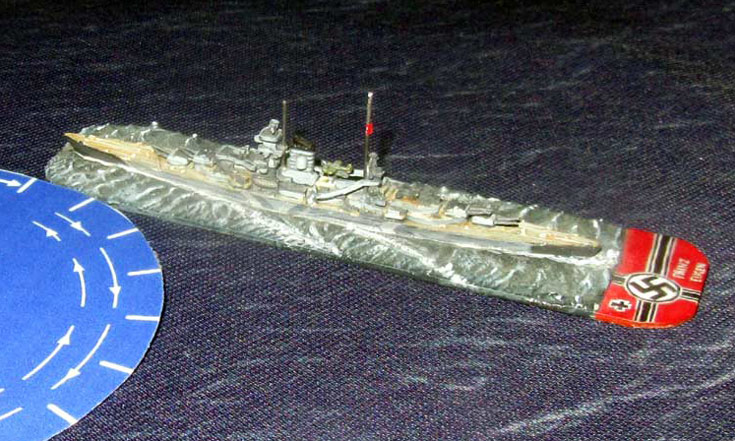 This was an unusual evening. First of all, I got there early and claimed my gaming table, as Dougie Trail was in town, and I was meeting him in the pub across the road. When we turned up I found some little shit had nicked my space, so we had to set up all over again, with me cursing like a stoker. So, we got off to a late start. Then, the plan was to run through a few turns of a search system, to generate a game. Then we’d play it out on the tabletop. The trouble is, we didn’t make contact for most of the evening. When we did, it was only between a pair of heavy cruisers. Still, we played that, as we had the toys all ready. So, a strange night all round!

We set out an 8×6 foot table, and with me umpiring the two players got cracking. Peter was playing the part of Admiral Tovey and his British Home Fleet, while Dougie Trail was Admiral Lütjens, flying his flag in the Bismarck. The German aim was to break out into the North Atlantic through one of the gaps between Greenland – Iceland – the Faeroes – Shetland, while the British had to patrol these areas with cruisers and aircraft, and keep a reserve of capital ships, ready to intercept the enemy when they were spotted. It all sounded fairly straightforward – or so everybody thought.

Our scenario generator was Bismarck, an old Avalon Hill boardgame dating from 1979. Each player had a search board, and used it to mark plot the location of his ships and any search aircraft. Clearly Peter had more of this to plot than Dougie, but then he’d the job of locating the enemy ships (Bismarck and Prinz Eugen), and then bringing them to battle. The Germans had a head start on the first turn, and made the most of it by powering towards the gap between Iceland and the Faeroes.

Try as he might, Peter couldn’t find them throughout the first day (22nd May 1941), and by nightfall he still hadn’t made contact, although he’d got a sighting from a passing trawler that the Germans were heading through the Iceland-Faeroes gap. It was actually getting pretty tense by that stage. Peter had the whole Home Fleet out searching, but every turn he was just a square away from making contact. Worse, during the night the weather deteriorated, and the morning of the 23rd May brought rough seas and dirty weather.

That makes it much harder to find the enemy, and so the Germans managed to sneak through everyone hidden by rain squalls and a storm front. From square E14 he dropped down the line of “14 boxes”, all the way to M14, all without being detected. Each turn was a four hour “watch”, and he got to move a box one turn, and two boxes the next. So, by the start of the evening watch (at 8pm on the 23rd) he’d reached the African Convoy route from the Middle East to Liverpool… all without being spotted.

This pretty much messed up our idea of using this as a quick scenario generator. Our stand-by was to refight the Battle of the Denmark Strait – the duel between the Hood, Prince of Wales, Bismarck and Prinz Eugen. We had all the ships ready to go. The trouble was, both players were getting into their stride now, and wanted to keep on going. Peter was determined he’d find Bismarck soon enough. Actually, during the night Dougie detached the Prinz Eugen, and she headed off to the north-west, so lurk around the Atlantic Convoy route.

The Bismarck stayed around P16, astride the African Convoy lane, and at noon a convoy dutifully appeared. This was dealt with on the boardgame’s Chance Table, and resulted in the Germans bagging a bunch of victory points, and the scattering of what remained of the convoy. the only advantage Peter got from this was he picked up a sighting report from the outgunned convoy escorts. So, at least he knew where to look. For the rest of the day the British raced south, and blanketed the area with search aircraft. Nothing.

This changed at 8pm, when two squares to the south on R17 another convoy was shot to pieces. Peter was getting pretty frustrated now, especially as the battleships of the Home Fleet were starting to run low on fuel. Dawn on the 24th May saw his aircraft refuelled and out searching again, and the sea was now calm, and visibility good. His run of luck though, can be summarized by the map above. The red counters are his ships, and the rest his search aircraft. In this snapshot above, at 8am on the 24th, Bismarck was in box R21 – surrounded by British ships and aircraft, but still not spotted! That morning though, we had our first proper contact.

It was the German heavy cruiser Prinz Eugen, spotted in box J7 by the British heavy cruiser Norfolk. It was pretty clear by now that the Bismarck was going to make it into Brest or St. Nazaire, and there was nothing Peter could do to stop her. So, meagre though this was, we decided to fight out this cruiser duel on the tabletop. This was “small beer” for General Quarters 3, but time was running out – it was after 9pm – and we wanted to shuffle some toys. Range was set at 18,000 yards, and the first few turns were spent with both sides cautiously approaching each other. Norfolk fired first, but it was Prinz Eugen who got the first straddle, causing a minor hit.

So, the duel was on. The Norfolk’s front 8-inch guns scored a penetrating hit, hitting the German cruiser’s bridge. So, no more Captain Brinkmann. However, Prinz Eugen had the range now, and pounded away at Norfolk, hitting her several times, knocking out three hull boxes in quick succession. This reduced her speed to 21 knots. She lost “A” turret too, so clearly she was getting the worst of the pounding. Prinz Eugen lost one hull box in return, but she could still cruise at 29 knots. Both sides tried firing torpedoes now, but none of them hit – although Norfolk’s spread of four came pretty close, and had to be diced for.

The range was now down to just 7,000 yards, and Norfolk lost “Y” turret and another two hull boxes. Prinz Eugen was unscathed. So, Peter, aka Rear Admiral Wake-Walker decided to call it a day. He laid smoke and limped off. Prinz Eugen could have given chase and finished her off, but that wasn’t her orders. She was out to attack convoys, not duel with enemy warships. So, she broke off the engagement, and so ended what was a most unusual evening of naval wargaming. While it was a clear German win, and we only had an hour of “proper” wargaming, we all enjoyed ourselves immensely. So, naval campaigns might be on the cards in the future – although next time we might save time by fighting them out beforehand, and save the wargames evening for the actual battle.