Following our theme of virtual games, this week my chum Gyles and I decided to play a simple naval game via Skype. As it was up to me to choose, I opted for part of the Battle of the Barents Sea, fought on 31 December 1942 off the northern tip of Norway. I’m pretty clued up about the battle, as I’ve got an Osprey campaign book coming out on it. Anyway, this part saw the German flagship, the heavy cruiser Admiral Hipper exchange fire with Force R – a pair of British light cruisers.

The Admiral Hipper, flagship of Vice Admiral Kummetz, was accompanied by the destroyer Z-29. A short while earlier, two other destroyers had been detached from the force, and were now out there somewhere to the east. For the British, Force R consisted of the light cruiser Sheffield, flagship of Rear Admiral Burnett, and the light cruiser Jamaica. The British had been tracking the Germans for radar for some time, and at 11.30 Burnett gave the order to open fire. So, the Germans were taken by surprise, and in our game this translated to the British getting in a free salvo. The game by the way, was played out on a 6×4 foot sea mat.

This first salvo was fired at a range of around 13,000 yards, or around 6 ½ sea miles- the edge of visibility range. Both British cruisers targeted the Hipper, but only scored two hits between them, knocking out a secondary 4.1 inch gun and smashing up the cruiser’s Arado seaplane, which started a small fire. The next turn the Germans fired back, and the battle began in earnest. As the German commander Gyles played it cool, maintaining his course and speed (16 knots). The two sides were on roughly parallel courses, heading west, but the Germans were angled slightly to the north, so the range was actually decreasing slowly.

As the British commander, I wanted the range to drop further, so my 6-inch shells could penetrate the Hipper’s belt armour. So I speeded up and angled in as steeply as I could, while still allowing all my main turrets to bear. The range was now below 12,000 yards, which meant I could indulge in “rapid fire” –  manual loading for a brief faster rate of fire. That meant more hits, and I was rewarded by several more superficial hits on the Hipper. The Germans though, were firing with even greater effect, knocking out Sheffield’s “B” turret and a secondary mount. The Z-29 was firing at Sheffield too, but hadn’t scored any hits. 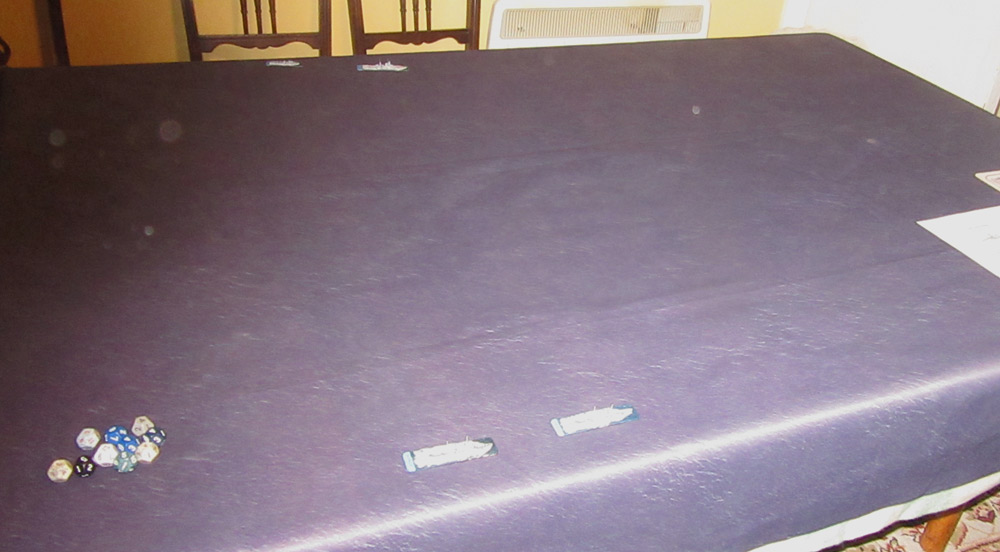 The range dropped rapidly over the next two turns, until on Turn 4 (11.42) it was down to 9,00 yards (or 4 ½ sea miles). To reflect the weather conditions that day, I rolled each turn for snow squalls, which could dramatically reduce visibility. For the moment though, they held off. Instead both sides pounded away, and started scoring some telling hits. At that range the British shells could penetrate the Hipper’s armour, and I was rewards with knocking out “Caesar” turret. The German 8-inch shells though, knocked out another of Sheffield’s turrets, damaged a bulkhead which caused flooding, then hit her steering, so she began circling to port. 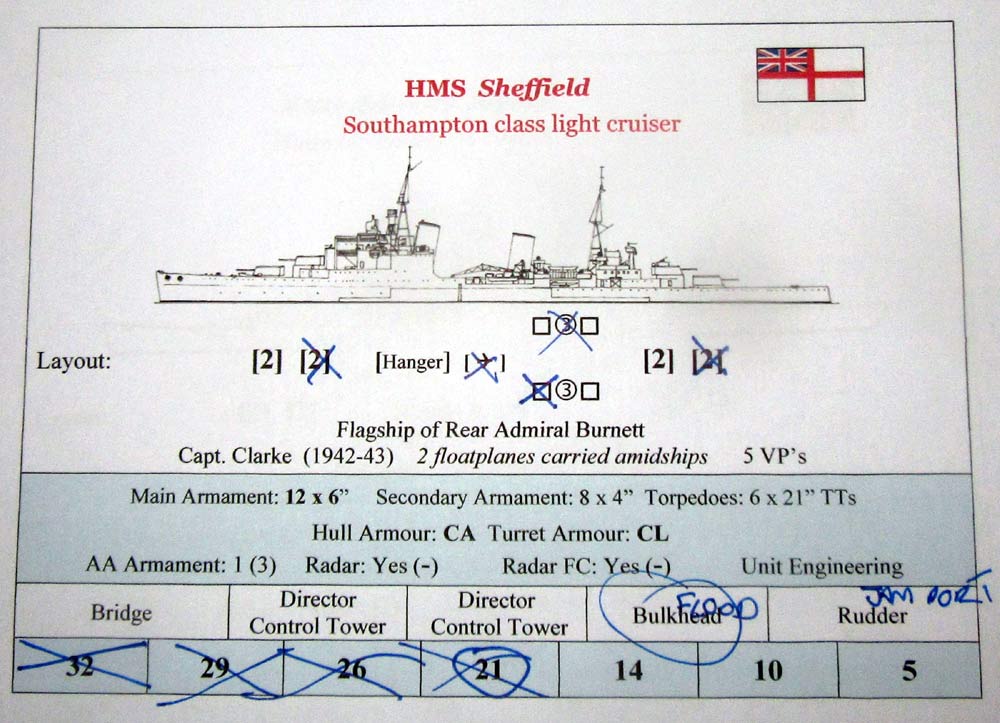 Sheffield’s hull was also getting battered too, reflected in an alarming number of hull boxes being crossed off.  Oh, she had a boiler hit too, so her speed dropped to just 14 knots. Here’s her ship card, showing how she was suffering by this stage of the action. By contrast her consort Jamaica hadn’t been fired at, and was undamaged. Hipper was suffering a bit too though – mainly through hull hits, which reduced her speed. When the last hull box is knocked out, the ship is left dead in the water. 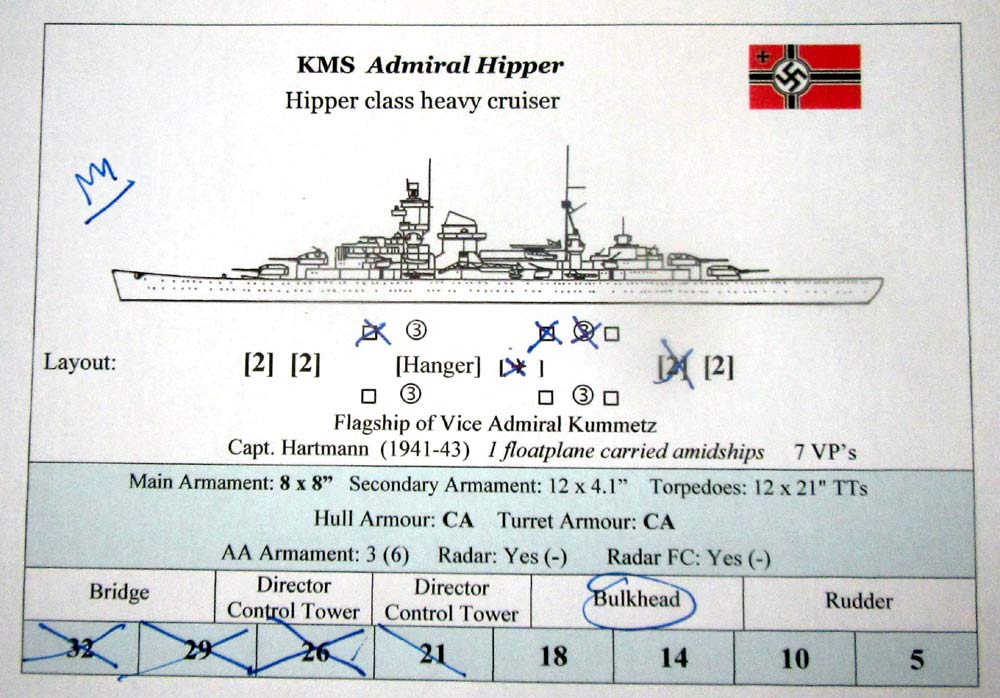 By that stage the battle had been raging for 15 minutes, and the outcome was still in doubt. Sheffield was in a bad way, but Jamaica was still fully in the game. However, Vice Admiral Kummetz had strict orders to avoid unnecessary risk, and not to fight opponents of equal strength. In the real battle he broke off the action almost immediately, and withdrew under cover of smoke. Gyles though, was made of sterner stuff, but even he had to be mindful of Hitler’s orders. So, he too decided to call it a day.

At that moment a snow squall swept in from the north, temporarily hiding the two sides. So, Kummetz used it as cover to turn away to port, and head off to the south-west. Burnett had his own problems, with the damage control teams on his flagship still desperately trying to fix her steering. So, on Turn 6 (11.48) the fight was over.

Jamaica turned about, and covered Sheffield until her steering was fixed, while the  two German ships headed off in the other direction, covered by smoke laid by Z-29.  In all this little scrap took an hour to fight – ten minutes of which were spent with me trying to get my laptop hooked up to Skype, to give Gyles an overall view of the table. Then, just before the end my phone battery died, and it took time to get hooked up again. Apart from that this naval scrap via Skype worked okay. We’ll try it again no doubt, but the technical frustrations left me hankering for a quick end to lockdown, and the chance for some real face-to-face gaming again.

Hipper was suffering too though,