Queen Victoria’s Little Wars, The Men Who Would Be Kings, 28mm

As we hadn’t played a colonial game for a while we visited the North-West Frontier this evening. The game involved a powerful British Imperial force driving up the Zhob Valley, in an attempt top capture the fort at Hindu Bagh. It had been held by a friendly ruler, until he was ousted by Pathan tribesmen who viewed the British less favourably. So, the aim was to recapture the fort, and restore the ousted ruler. Stopping them though, were a bunch of Pathan tribesmen who had other ideas. 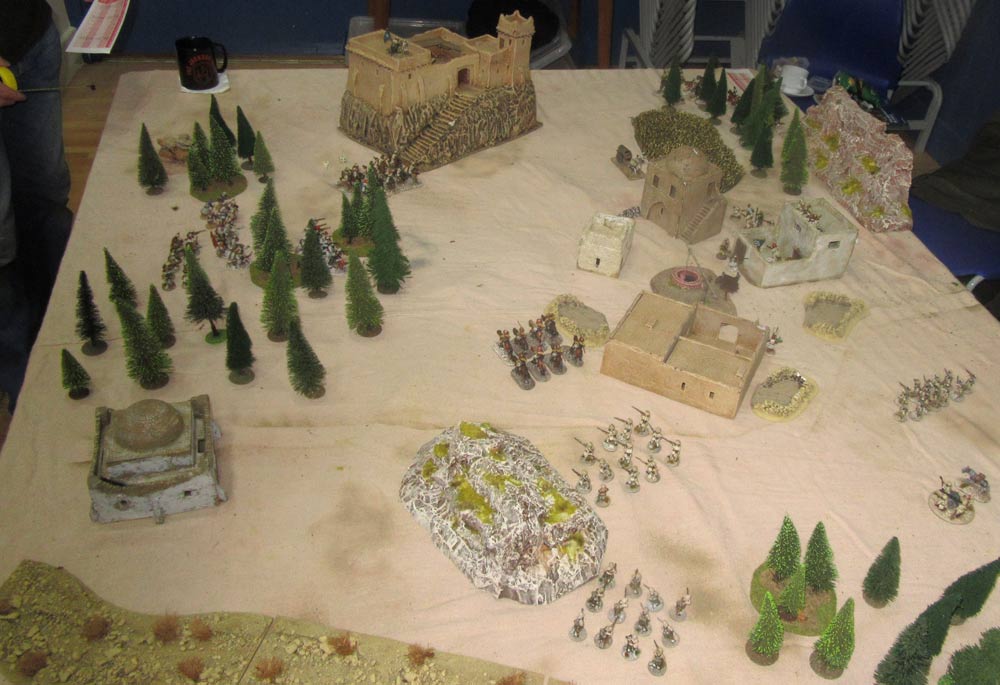 The game was payed on a 6×4 foot table, with the fort at one end, and the village of Hindu Bagh in the centre. The rest of the table was covered in the usual terrain for a  remote North-West Frontier valley – pine woods, a dried-up nullah, a few rocky outcrops and a ruined mosque. In this game Nick and Sean played the British, while Mally and I commanded the Pathans. 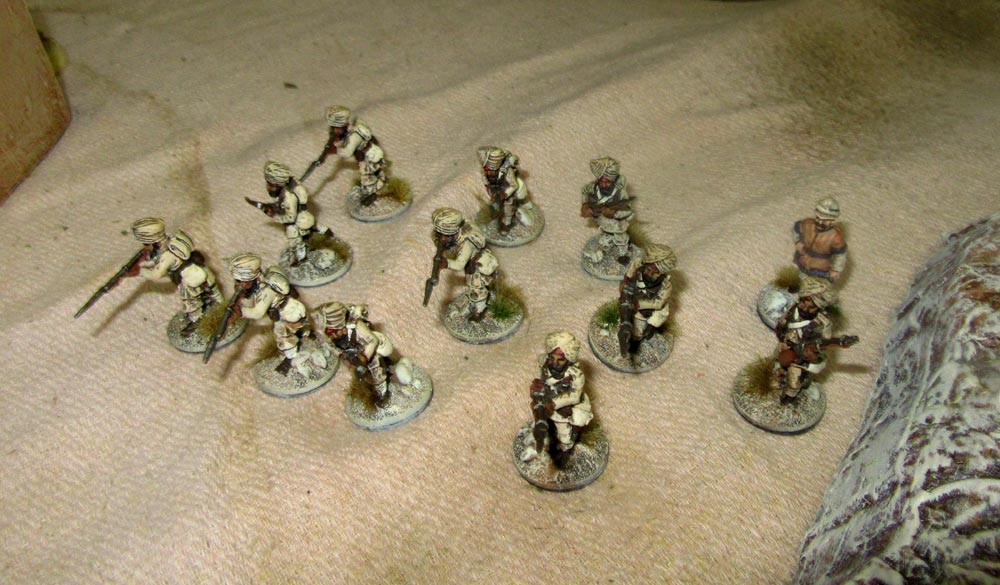 The British had four units, each of twelve infantry (two Sikh, one Gurkha and one Highlander), plus a mountain gun and a detachment of Bengal Lancers. The Waziri Pathans were divided into two groups, each with two units of 12 irregular infantry and a unit of 10 tribal cavalry. My one to the north – coming on near a rocky outcrop – also had a poorly-crewed old mountain gun, while Mally’s extra unit was a group of 16 Ghazni fanatics – classed as fierce tribal infantry. 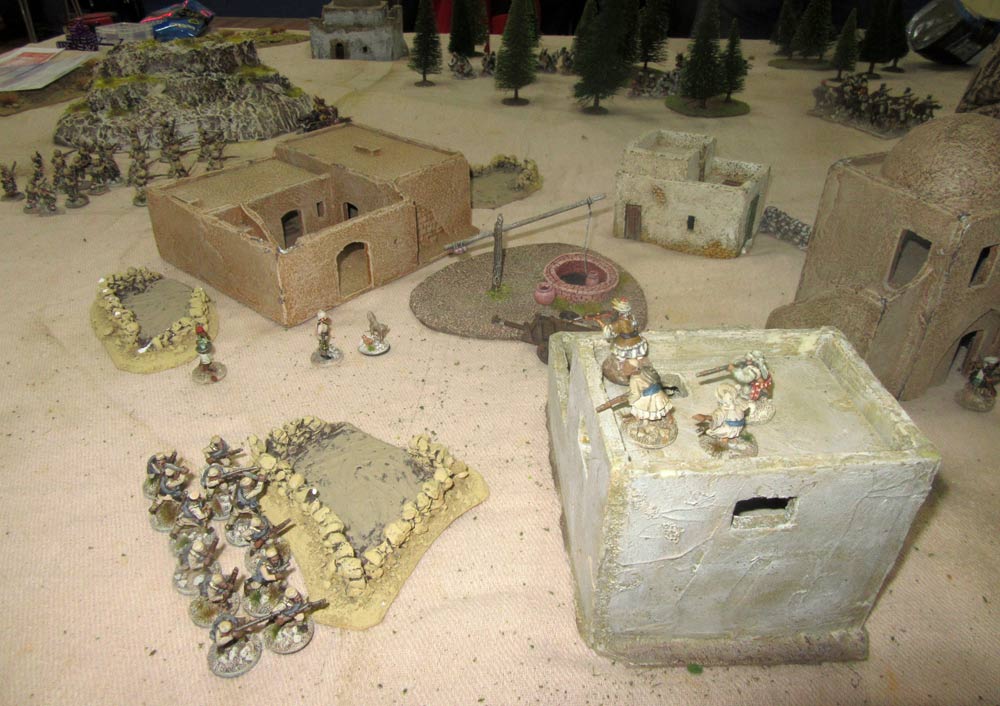 The British advance was slow and steady – not from choice, but because Sean kept failing his activation rolls. So, some of my tribesmen got into the village first, and opened up on Nick’s column before they reached cover. They darted behind walls and buildings, and opened up with their mountain gun. While not hugely effective, it still killed a tribesman or two each turn. So, I was gradually whittled down. So too though, were the Gurkhas, and eventually the Sikhs when they reached the buildings. 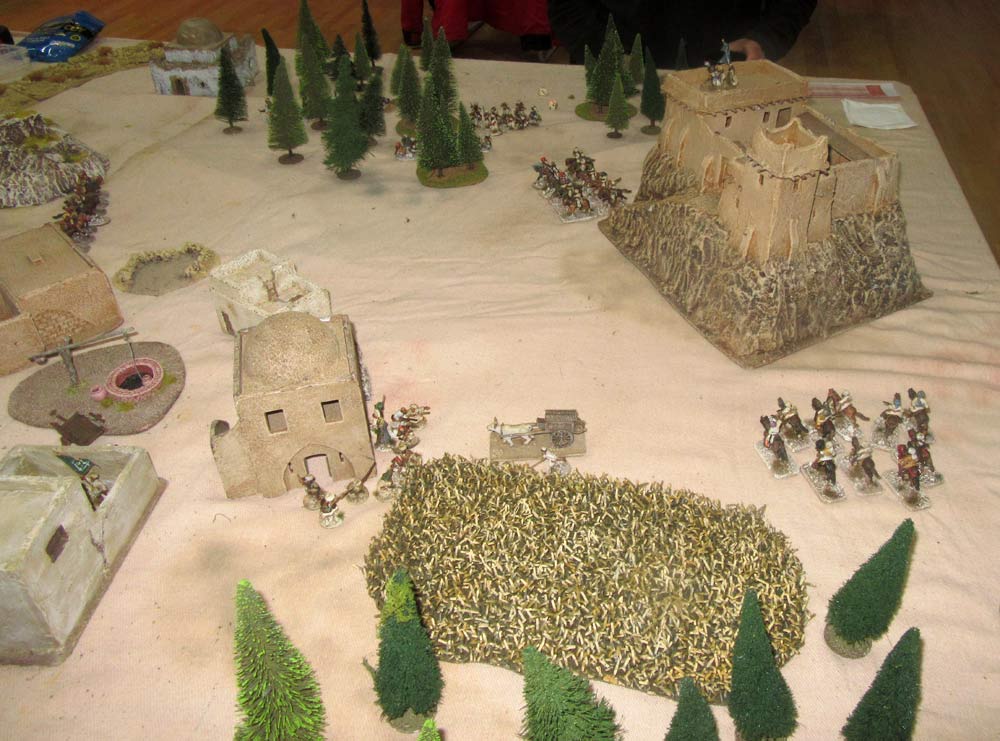 On the far side of the table Mally had his own activation problems, but eventually reached the edge of the pine wood. There he opened up on Sean’s Sikhs and Highlanders, who had formed up into an almost Napoleonic firing line. The Pathan chuckling at this was short-lived though. Out from behind it came the Bengal Lancers, who duly charged into the nearest unit of Waziris, on the wood edge. They promptly skewered the Waziris, with only one man escaping into the safety of the woods. 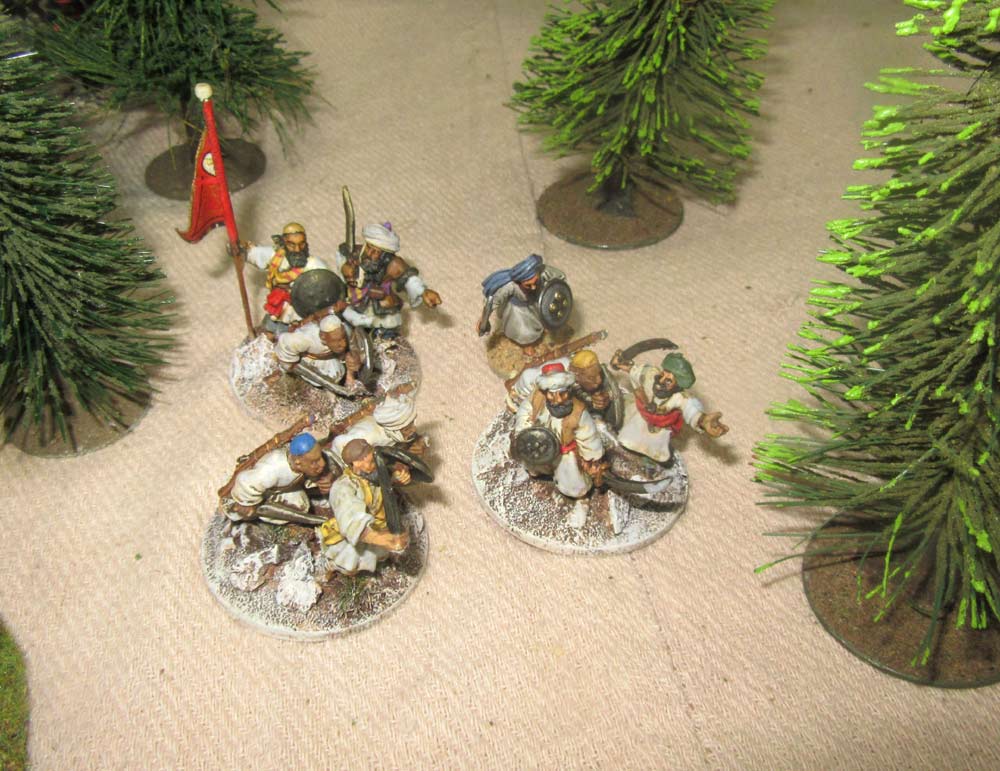 The lancers were then charged by the Ghazni fanatics, who chopped up three of the horsemen, before being all but wiped out themselves. Their ardour cooled, the Ghazni survivors fled deep into the woods, never to be seen again. Emboldened by this, Sean then charged them into Mally’s second unit of irregular infantry, who were heading for the entrance to the otherwise empty fort. 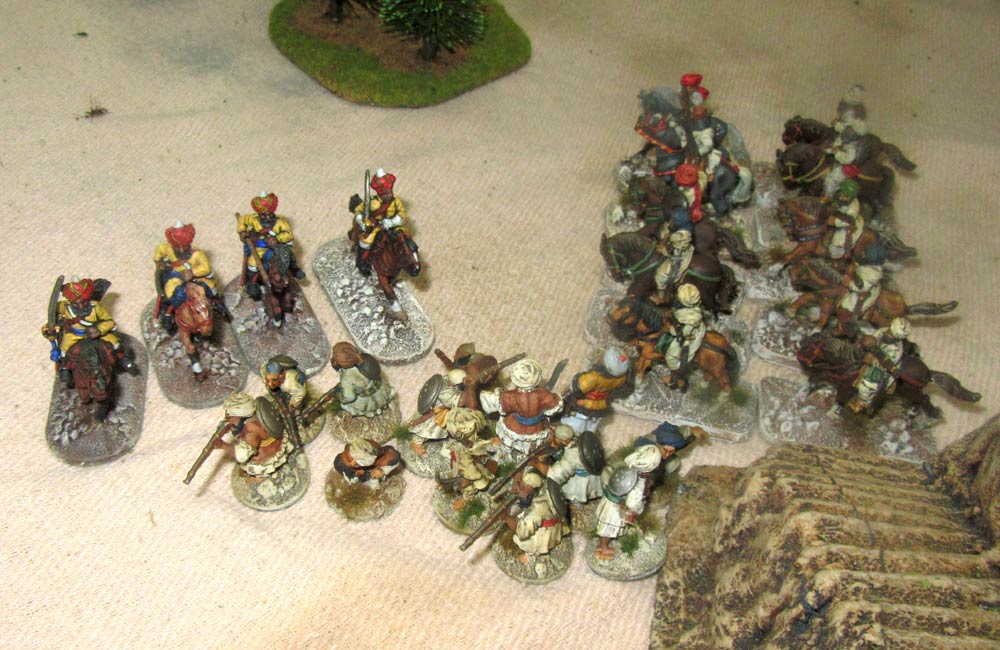 Still, the lancers lost a casualty before they charged home, from my Pathans in the village. The fight though, was pretty one-sided. Most of Mally’s Waziri irregulars were slaughtered, and the survivors fled towards the fort. The Bengal Lancers though, lost a casualty themselves, and with just three let they were very vulnerable. That’s when Mally’s tribal cavalry charged home, and wiped out the last of the gallant lancers. By then, with Sean’s Highlanders now ensconced in the village, Sean’s offensive had run out of steam. 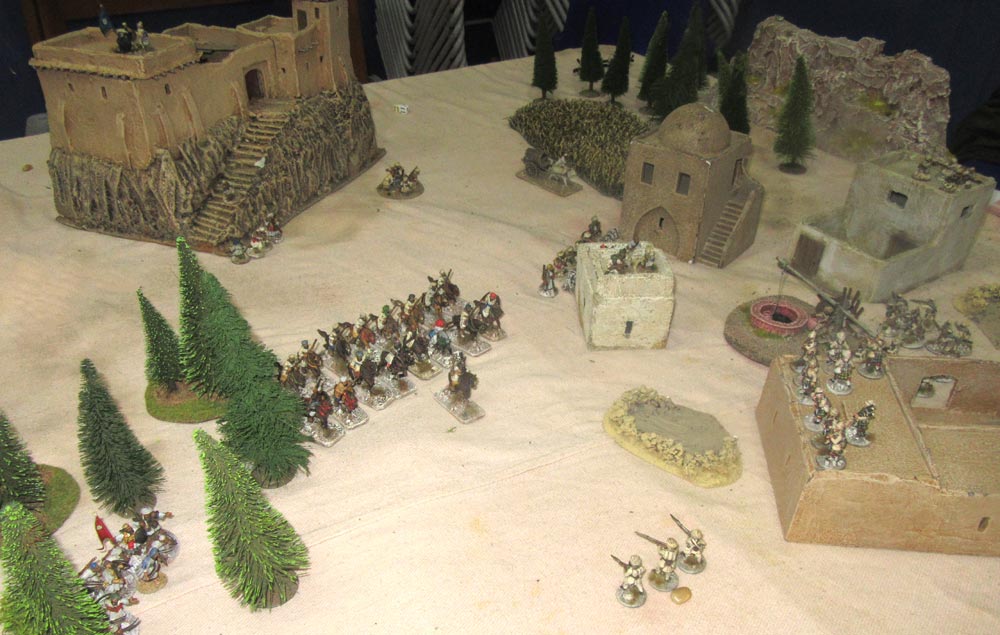 Matching Sean’s own Napoleonic touch, Mally and I formed our two units of tribal cavalry into one large brigade. That though, attracted the attention of the Highlanders, who switched from sniping at my Waziris in the village, and targeted the horsemen. While Mally pulled back out of close range, I charged mine forward, riding down the last of Sean’s Sikhs, who were down to just three figures. Surprisingly my cavalry only lost one figure to the Highlanders as they trotted back to the base of the fort to regroup. 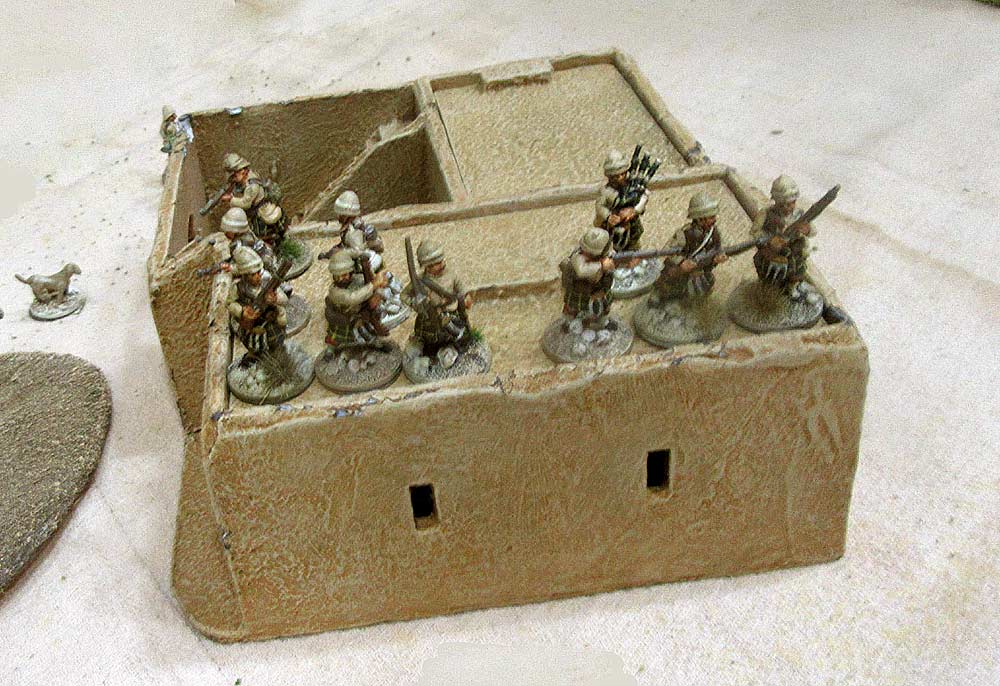 It was now up to Nick to save the day. He did well – kukris in hand, his Gurkhas braved Pathan fire to storm the building where the remains of one of my units were. The defenders were slaughtered to a man, leaving the British in control of half the village. However, that was pretty much it. To winkle out the remaining Pathans would have taken more troops than they had left. So, we called it a day. If they wanted the Hindu Bagh, the British would have to come back with a stronger force. Another game for another day…As the British withdrew, Colonel Macrae, with his trusty gin bearer Ahmed, sized up what it would take to  win the next time around. 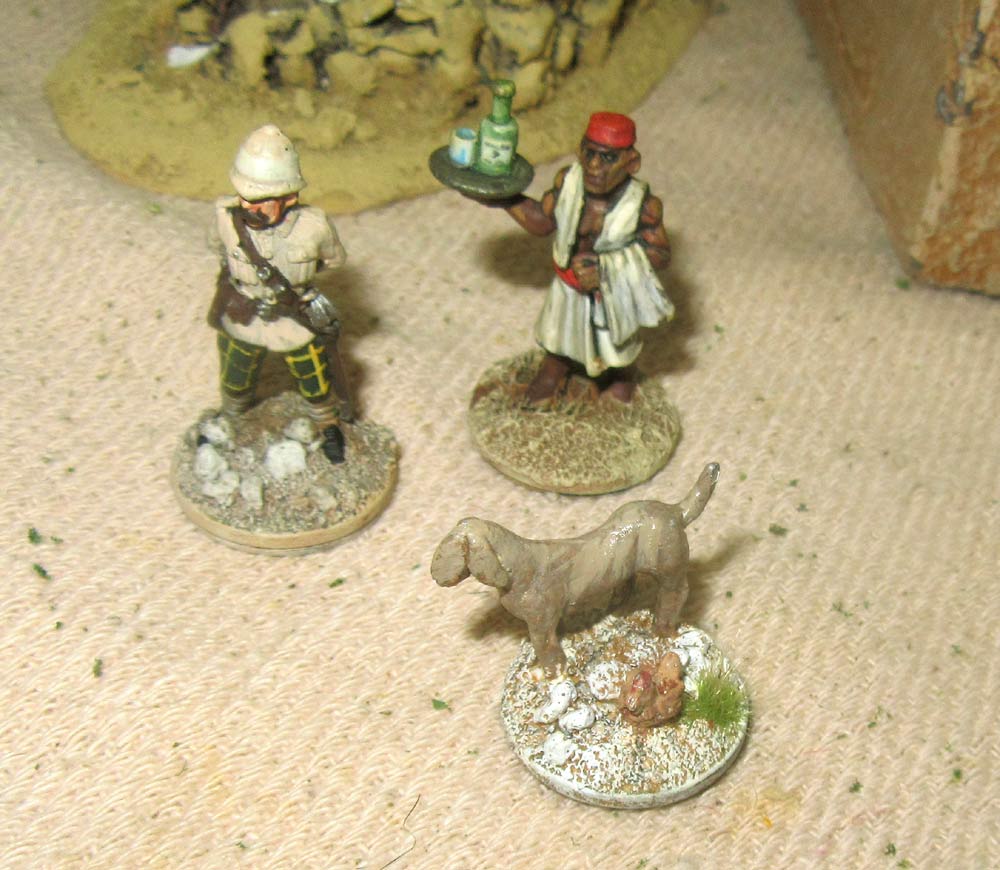