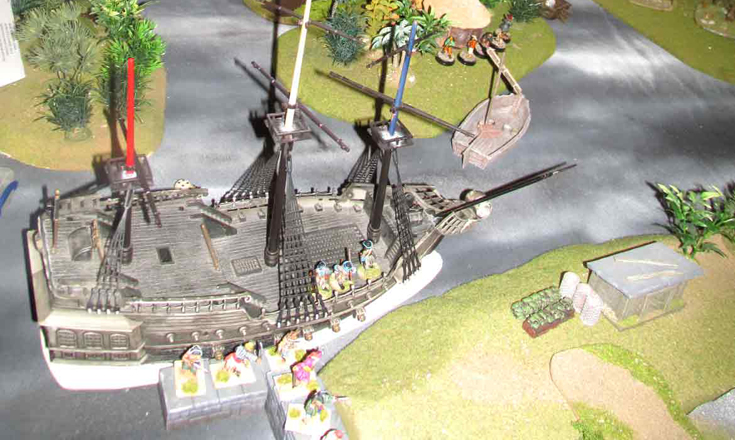 On the morning of 5th April I heard that my wargaming pal Hugh Wilson had died suddenly – the result of complications following surgery. This was a real shock – it still is. Every two weeks Hugh hosted games round at his house, and laid on the most impressive tables. I didn’t go to them all, but I enjoyed my visits, as Hugh and his wife Suzanne were excellent hosts, and his games were always great fun.

His dining room was his wargaming room – big enough for a 6 foot by 13 foot table. When he died he was preparing for his latest one – a multi-player pirate extravaganza, complete with a glowing volcano and a bunch of ships, all culled from local charity shops. Anyway, rather than pack it all away, Suzanne suggested we put it to good use, playing one last memorial game at the house. So, this week that’s exactly what we did.

In this game, we used rules Hugh had devised himself – back of a postcard stuff, but exactly what we needed for a freewheeling game like this one. Each of us had a ship and a crew of ten men. You got money by looting villages, or by killing other pirates. There were also special events – good and bad – and two garrisons – a French and a British one – who were there to make life as hard as they could for the pirates. It was set in some fictitious Caribbean archipelago, and featured some excellent terrain.

The centrepiece was the volcano, which actually glowed thanks to a set of lights and a battery hidden beneath the smoke coming out of its crater. Hugh made all the terrain himself, and supplied most of the ships and pirates. The rest was augmented by some of the players.  The came was umpired by the honest and not at all cut-throaty Donald Adamson.

On my side of the table I was wedged between Captain Bill and Captain Tim. Both weren’t really much of a threat, but after plundering a couple of small villages I headed over to Bill, and got shot at for my pains. This act of unprovoked aggression was ll down to me appearing off his thinly-guarded pirate ship, while the bulk of his crew were ashore plundering another village. I promptly boarded the ship and captured it, losing two men in the process, but killing three of Bill’s crew.

On the far side of the table Captain Jim was doing much the same – plundering villages and then trying to stab other gangs in the back. While Tim took on the French garrison – hoping for plenty of plunder – Captains Dave and Campbell did the same on the British-held island, while fighting each other into the bargain.

That’s the French garrison up above, and their small watchtower. They did pretty well. They managed to wipe out Tim’s crew in its entirety, losing just one man in the process. After that everyone gave the French island a wide berth! Just before this clash I rowed up and stole Tim’s boat. I had four boats now – two of my own, plus Tim’s pinnace and Bill’s galleon. I set all but one of them ablaze, leaving poor Bill stranded on his desert island. Clearly there’s no honour amongst thieves! Right at the end of the game Dave sent a boat over to rescue Bill – or rather to offer his services in return for plunder – which isn’t really the same thing at all. I’m sure if the game had gone on one of them would have stabbed the other in the back…

On the far side of the table the British garrison also held its ground, and fearing getting caught between two enemy forces, both Dave and Campbell backed off. That meant that the only villages left unplundered at the end of the game were the British and French ones, and one of the two on Volcano Island. beyond the volcano Captain Dodgy Dave tried without much success to carve out his own pirate lair, but Jim proved too much of a threat, and he didn’t manage much at all. Down there Captain Ray – who commanded the French garrison – might well have done more, but was sans bateaux.

The only one he could have used had been captured and burned by my crew. So, at 10pm we stopped the mayhem, and counted up the plunder. Donald did the sums – he’s a retired accountant, so these things came naturally – and I believe Captain Campbell was declared the winner – although I might have got that wrong. it didn’t matter anyway, as this game wasn’t about winning or losing – it was about enjoying Hugh’s wargaming room for one last time. Hugh did us proud, laying on – posthumously – a game which was typical of his tabletop extravaganzas. He – and his gaming evenings – will be sorely missed.