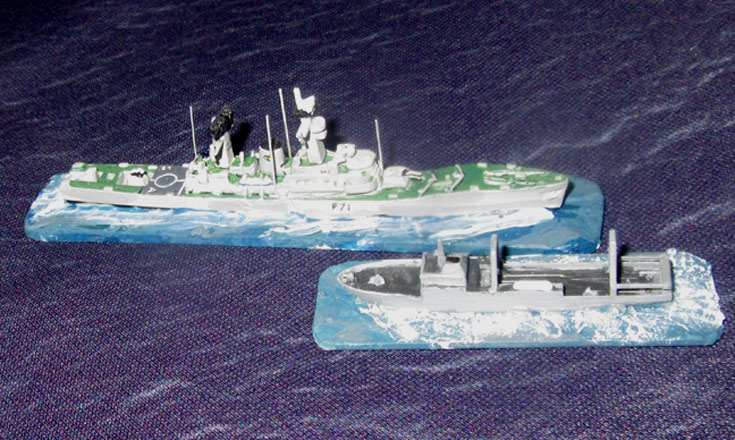 We hadn’t played this for a couple of years, and so we decided to give this another go. In fact, during that time the rules received a makeover, and even a new name. This one was set in the mid ’70’s, with four British trawlers fishing “The Whaleback”, a fishing ground  to the east of Iceland. They were guarded by the frigates Scylla and Naiad, and by the hired support vessel Star Polaris. The the Icelandic Coast Guard had three vessels – the Baldur, Odin and Tyr. Gyles and I split the British ships between us, while Sean played the baddies. The game was staged on a 6×4 foot table, covered in a featureless but slightly wrinkled sea mat.

In this one, Gyles and I had control of two trawlers apiece, and a frigate. Gyles also had the Star Polaris. Confident that our three escorts could protect the fishermen, we kept our nets down, and fished happily away. You see, for each turn you fish, you get a point – I’d made little cod-shaped markers for that. However, you could only go pretty slowly, and turn very gently. Once you decided to haul in your nets it would take ten turns before they were all on board. For five turns though, you still got fish points. Gyles had a stern trawler – all the others were beam trawlers – but the same general idea applied. So, timing was everything.

That’s where Gyles and I made our first mistake. We should have hauled our nets right away, as the three Icelandic gunboats raced in at 20 knots (or 20″), heading straight for us. My other big mistake was that I forgot the marker pens. So, we had laminated ship cards, but nothing to write on them with. In Cod Wars! you should really plot each ship’s movement, then go simultaneously. As we couldn’t do that we sort of diced for order of movement. I knew this gave Sean a much better chance of cutting our nets, but I didn’t quite realise just how easy it would be!

So, the three ICGVs came hurtling in, and on the first pass the Baldur cut the nets of Gyles’ beam trawler. That was  -10 points in the bag for the Icelanders. Then, the Tyr did the same with one of mine. We tried intercepting the gunboats and ramming them, but it wasn’t enough. That though, just left two trawlers still fishing – and now hurriedly recovering their nets. With two warships and a supply boat, and now two trawlers with furious crews, we thought we could protect them. How wrong we were.

What followed was a frenetic hour of maritime dodgems. Gyles’ frigate Naiad rammed the Odin, and then did it again with a stern swipe. The Baldur got rammed by my net-less trawler Port Vale, but while this was happening the Tyr cut the nets of Gyles’ stern trawler, the Boston Blenheim. That just left the trawler St. Gyles, protected by a frigate, a supply boat and another trawler. It was the ruddy Odin that did that one, swooping in, executing a handbrake turn and slicing along the trawler’s port side. The last net was cut, giving us a total of -40 points. Now all the cocky Icelanders had to do was to get off the table.

The three Icelandic gunboats headed for home, or rather limped off, as all three of them had now been damaged to some degree. By now though, each of them was being chased by everything we had, and the collisions continued. The frigate Scylla got one in on the Tyr, and the Star Polaris slammed into the Odin.  Even the St. Gyles had a go at the BAldur, as did the William Wilberforce. It wasn’t enough though. The game ended as Sean’s three ICGVs made it off the table. We’d accrued about 19 points through fishing. Set agaisnt our loss of 40 points, that left us with a score of -21. This went up slightly as by now the Odin was forced to withdraw, but with a final score of -11 the bad guys definitely had the better of us. Heck, we needed +20 points to win the game, so we’d done shockingly badly! Still, next time it’ll be different. For starters, my old ship Falmouth will be out there on patrol!