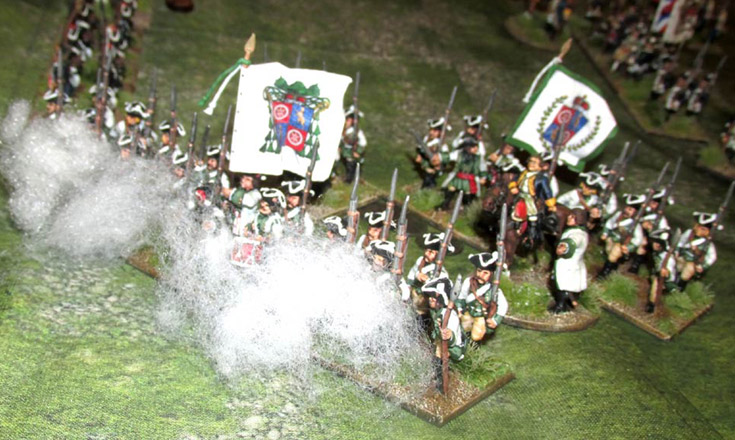 The Seven Years War, For King and Parliament, 28mm

This week the game was a little unusual. Simon Miller visited the club, and laid on a game. Strangely, it wasn’t one using his To the Strongest Ancient rules (which I really like). Simon and my wargaming friend Andrew Brentnall has been developing an English Civil War version called For King & Parliament. So, did we play a Civil War game? Oh no. We decided to stretch the elastic rules system even further, and used it for a Seven Years War game!

What you need to know about To the Strongest/For King & Parliament is that they use a grid system. It’s a hidden grid really – you can hardly see the 8″ (20cm) squares. However, they discreetly covered out 8×6 foot table – one that was largely devoid of terrain, apart from a big hill (the Warburg), a road and a few trees, scattered around for scenic effect.

Ken Pearce came up with the scenario, based rather loosely on the Battle of Warburg (1760), fought between the French and Frederick’ the Great’s Western Allies – Britain, Hesse-Kassel, Hanover and Brunswick. However, Dave Imrie wanted to use his Austrians, and I planned to field my Reichsarmee, so the French had to make way. Similarly, while there was a British contingent at the Warburg, Ken beefed it up a little so he could field his pretty but wafer-thin troops, while Jack Glanville used his Prussians. The Imperial force had four brigades, a gun battery and a regiment of hussars, while the Allies fielded five brigades, two brigades of horse, and a couple of gun batteries. So, we were outnumbered, and on the defensive.

Our forces were poorly deployed too. We started with one Reichsarmee brigade on the Warburg, while to the right the rest of the army was strung out in three brigade-sized clumps astride the road. The Allies also had a brigade of elite troops on the Warburg already, holding the crest-line (marked by two little sandy scrub things). As this was an objective, we had to take it back from them, and then hold it against all-comers. So, the pressure was on.

We began in fine style though, out-shooting the two Prussian grenadier battalions of their advanced guard, and driving back their supporting Freikorps jaegers. Better still, a lucky card led to their brigadier being severely wounded, and carried from the field. So far so good. Remember I said “card”? That’s the other thing with this innovative system.  There are no dice. You turn cards to activate, fire, move or melee, and also to save hits. It actually works rather well, and after a few turns we were going along at a fair old lick.

The Prussian advanced guard was driven from the hill – or rather what was left of it, as a second grenadier battalion was wiped out by the fire of my Pfalz-Zweibrucken contingent.  However, by then half the Prussian army was clumping up the hill, and I was hard-pressed to hold the line. One after another my units were disordered, but held. I saw off one more battalion on that hill, but lost one of my own. Still, until now I’d held my ground, and the hill was still being contested.

Down in the valley Dave Imrie was having a worse time of it. Our historical deployment meant that his two rearmost brigades weren’t in position to support the Austrian brigade in the front line. it had a big British force facing it, and was under real pressure. The second Imperial brigade – my second Reichsarmee one – deployed between the Austrians and the hill, where they came under fire from an irritating battery of Prussian guns. Dave’s rearmost brigade formed our reserve, and never got into action.

That’s when the enemy cavalry appeared. On my side a brigade of two dragoon regiments rode up the hill, then failed to charge home against the remnants of my Pfalz-Zweibruken contingent. In fact the horsemen milling around made a great target, and began taking casualties, which made them even less keen to charge home. They did in the end though,. only to be bounced by the fire from my infantry. So, we survived. I lost another battalion though – one of the Mainz contingent, which was doing its best to hold off a whole heap of Prussians on the slopes of the hill.

Down in the valley Dave’s line was coming apart. First he lost his guns, and then a unit of grenadiers – some of his best troops. The British cavalry loomed on his flank, but again they didn’t really manage to get their act together and charge home. That’s where we left this game – a sort of draw really, but one where the Allied attackers were gradually breaking us through weight of numbers. if we’d been more au fait with the system it would have gone even faster, but after all this was a playstest, designed to test things to breaking point and beyond. In fact, Simon was using his English Civil War system, with a few tweaks – the biggest being the possibility of diagonal movement and firing.

On the whole it really worked well for a playtest. It mightn’t be a perfect simulation of Seven Years Warfare yet, but it was fast, furious, and once Simon applies the period-specific rules to it, then it should really do the business. Above all we all had a great time, and so I tip my hat to Simon for giving up his time to keep us entertained.