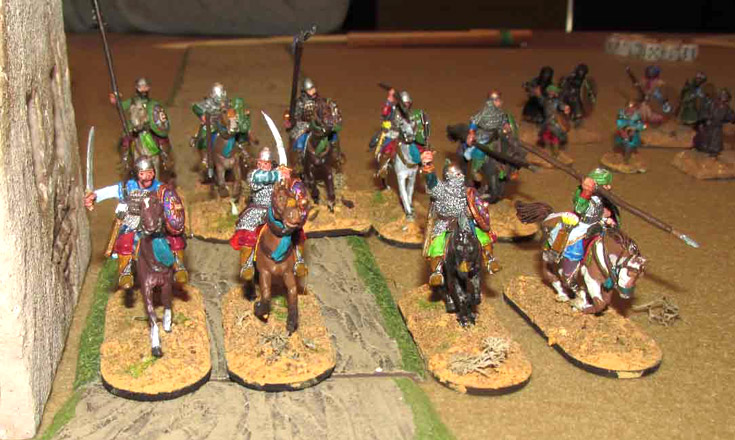 I have to say, I’m not really a fan of the Crusades. Too many religious nutcases – on both sides. Still, Alan Bruce, leading light of the Orkney wargames scene is keen on the period, and talked us into playing a couple of games set in the First Crusade, or shortly afterwards. He uses Cross & Crescent, the crusading version of the Dark Age Saga rules. Now, Saga are pretty good for Dark Age skirmish games, and this variant used exactly the same system. The core rules are pretty straightforward. In both rule sets, you attack your opponent using a certain number of attack dice, based on troop quality. your opponent defends using defence dice. He rolls against the number of hits you’ve scored, and these become the saves. The difference between the two scores represents the figures you’ve killed. Both sides attack each other, so you’ll have two lots of dice to roll for each combat. A rudimentary morale system encourages the loser to break off, but in our experience units often fight it out until one or other is destroyed.

What makes Saga and Cross and Cresent different are the Battle Boards. Each side has a battle board, and battle dice, covered in strange symbols. Essentially you roll the dice, and see what symbols come up. These apply to boxes on the battle board which allow you to activate a unit, or to give it enhanced abilities. For instance, in our first game the Crusaders really had an advantage in melee combat, as there were lots of boxes which let them increase the number of attack dice they get. The Saracens, by comparison, were better at shooting.

We actually played a couple of games – each lasts a little over an hour – swapping sides and opponents. In the first, the Crusaders were up against the Moors. Sure, we should have used the Spanish battle board, but Alan – who was umpiring – hadn’t read their extra rules, so Crusaders it was. The Crusaders were encouraged to spend some of their dice early on to gain Knightly Virtues (Temperance, Prudence etc.), and these unlock ever grander battle board options. Until now I never regarded temperance as a virtue, but it DOES help in this game!

The first game saw the Crusaders pretty well smash the Moors through a series of reckless but highly effective cavalry charges. The game ended with the Moorish leader being isolated and cut down by a particularly well-timed charge. The next time round the Crusading player used the Milites Christi – the Holy Orders such as the Knights Templar – while the Muslim player opted for the Mutatawwi’a (christened the Muddy Twats). This was a completely different ball game.

As before, the Christians had to spend dice to unlock abilities on the Battle Board – in this case Piety levels. Piety has never been a strong point of mine – or at least no more than temperance. However, the Christian force spent their points to improve their scores, and sought to smash their opponents using devastating cavalry charges – just like in the previous game. However, things didn’t quite work out the same way.

It turns out that the Mutatawwi’a have a secret weapon. First, they can use dice to dispose of people as martyrs. Having a couple of large but cheaply-pointed units of rabble, these martyrs can turn them – temporarily – into better quality troops, or at least more enthusiastic about mixing it with the enemy. This though, wasn’t the Muslim’s secret weapon. That was naptha. It turns out that the Mutatawwi’a can also replace a couple of their figures with a naptha team. Imagine it as a great War era flamethrower team, only with clay pots and hissing fuses.

They were truly devastating, as they cause heavy casualties amid the defenders’ ranks. As a result the small but brittle units of Crusading cavalry were literally burnt up in combat! All in all the games were good fun, but they were slow, as nobody was really very familiar with the rules (only Alan has a copy), and we kept having to pore over the options on the battle boards. Still, it gave an enjoyable game, and I’ll certainly try the rules out again.