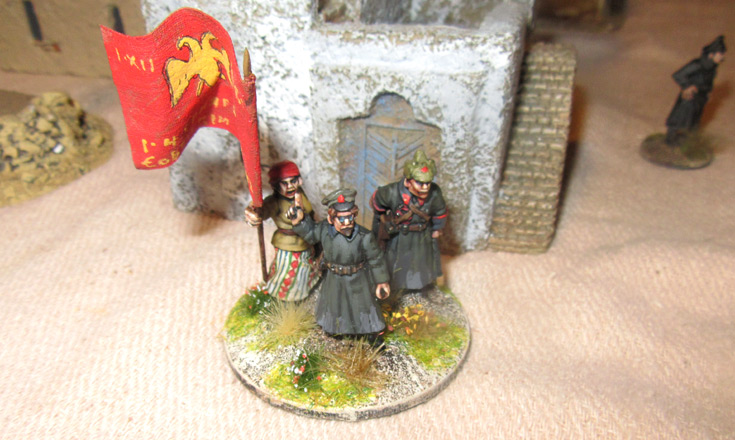 This game was an almost forgotten pleasure – gathering with a few friends to shuffle lead. Of course, we had to do it while adhering to all the Covid rules, but it was a joy nonetheless. As I got to choose what we played, I settled on a Back of Beyond game. After all, that was almost the last type of game I played before lockdown first hit. So, this week it was off to the wilds of Uzbekistan. 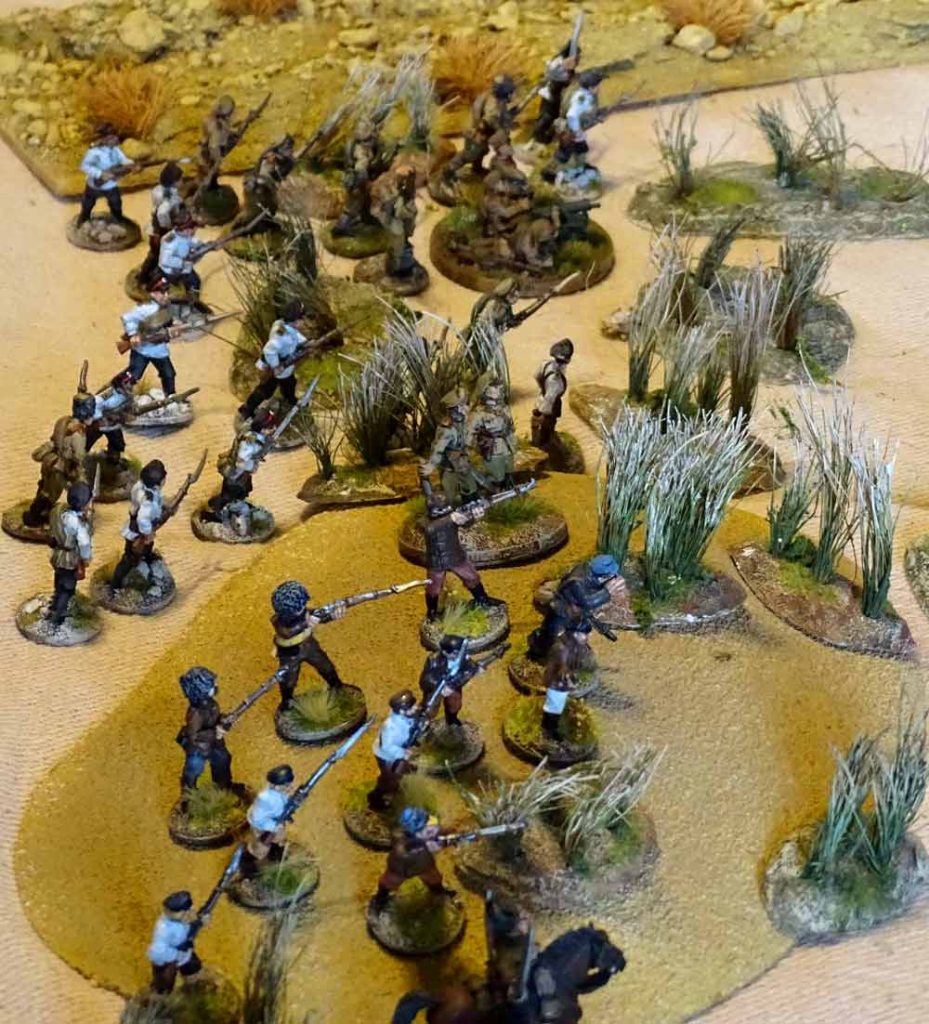 There’s a scenario book for Setting the East Ablaze. In it, one of them covers “The Osipov Revolt”, where a dodgy Bolshevik turned  counter-revolutionary led an attack on Tashkent. I simply altered the forces and layout to suit my collection, and off we went. In this game, played on a 6×4 foot table, Lindsay and Gyles were the counter-revolutionary Whites, while Mally and I played the Bolsheviks. 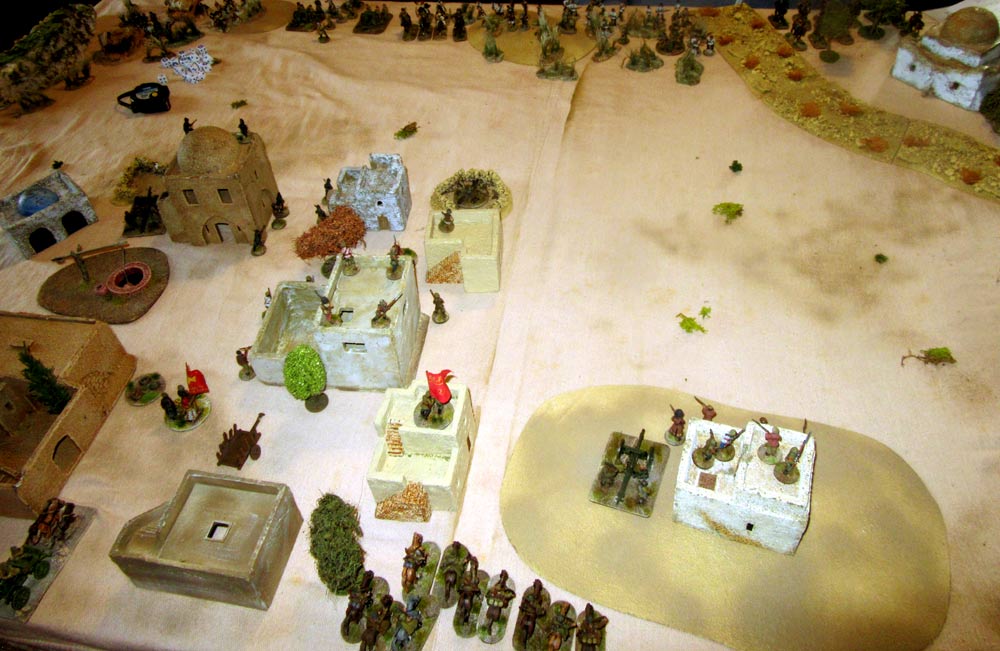 The Whites had to capture three key points on the outskirts of Tashkent – the police station on a low hill, the barracks, and the railway station. Lacking a railway, I made the third objective the city mosque. Defending the place were a small Bolo force of workers and soldiers, supported by a Cheka detachment and a handful of heavy weapons. Mally was in charge, as Commissar Dunkov, while I was his No. 2.  If we held on long enough, we could roll for reinforcements arriving down the road from Turkistan. 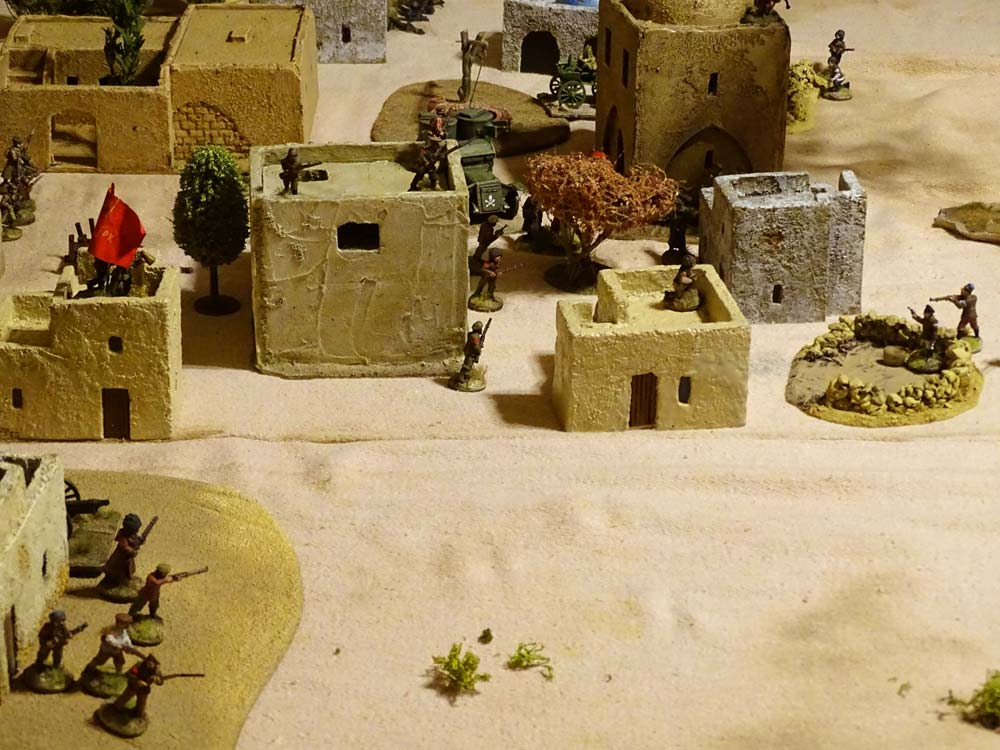 The White Commander Col. Osipov (played by Lindsay) ordered a general advance, and so the counter-revolutionaries swept forward. We had some initial success with our machine gun and field gun, before the White unlimbered their own guns. Leading the advance were the White cavalry, which, while mown down, helped screen the advance of the infantry behind them. 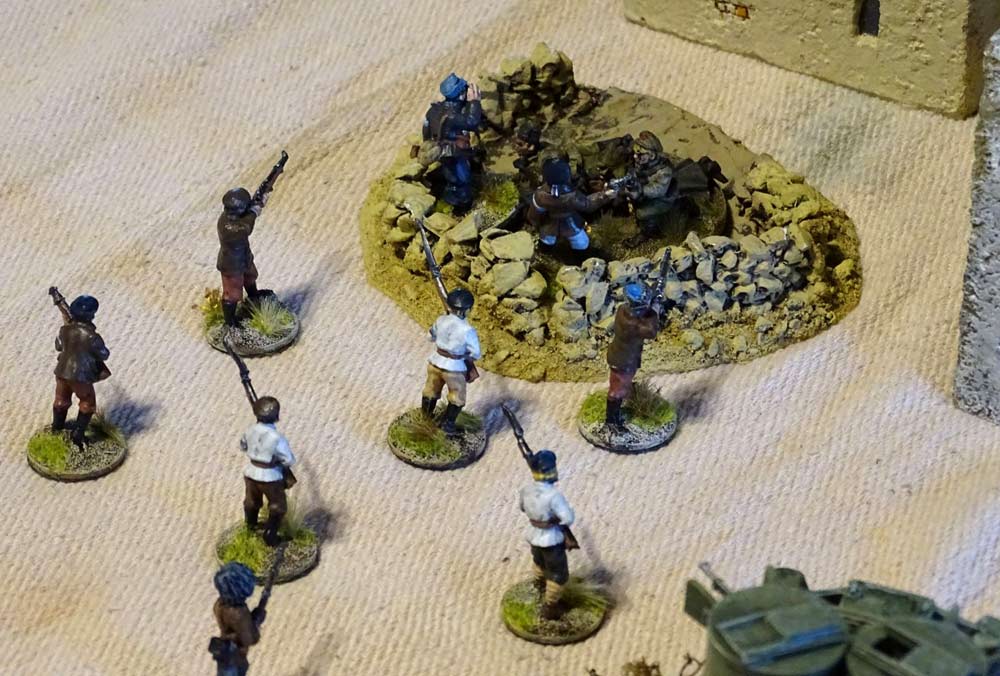 Gyles, playing Osipov’s deputy Major Nikolov managed to get his unit of 10 railway workers right up to the Bolo machine gun, despite taking casualties on the way in. He was helped a bit by the machine gunners being distracted by a White armoured car which raced up to fire in support. Meanwhile the rest of the counter-revolutionaries were closing in, and converging on the mosque. 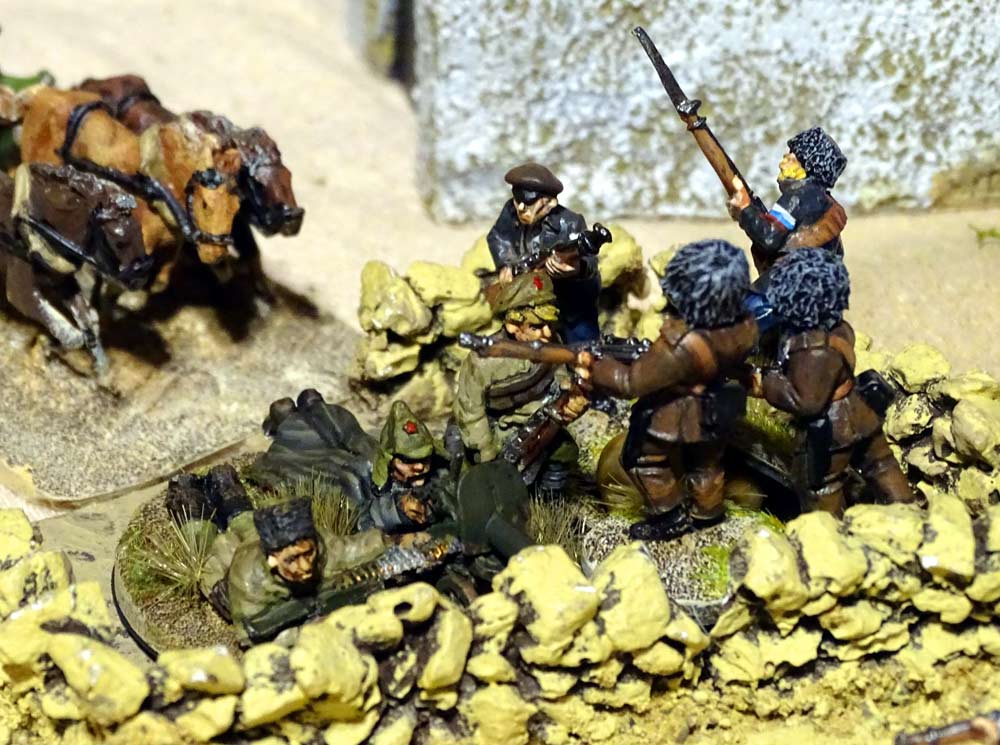 The machine gunners were overrun, while almost simultaneously the White guns knocked out our one field gun. Things weren’t going well, even though we managed to wipe out the railway workers, and the Cheka guarding the mosque shoot up the second unit of White cavalry that tried to ride into town. That though, was countered by the White armoured car, which had reached the town square. 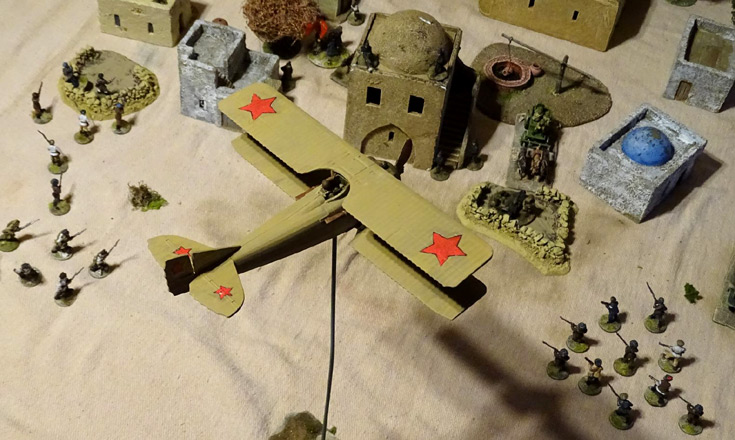 At that point we got a couple of fresh breaks. First, or reinforcements started trickling in, spearheaded by Red Army infantry. Then, our plane arrived – a Bolo Spad, which flew over Tashkent to bomb those pesky White field guns. Amazingly, one of the two guns was knocked out by the bombs, and the pilot flew off, happy that his job was done. the Whites though, were still piling into Tashkent. 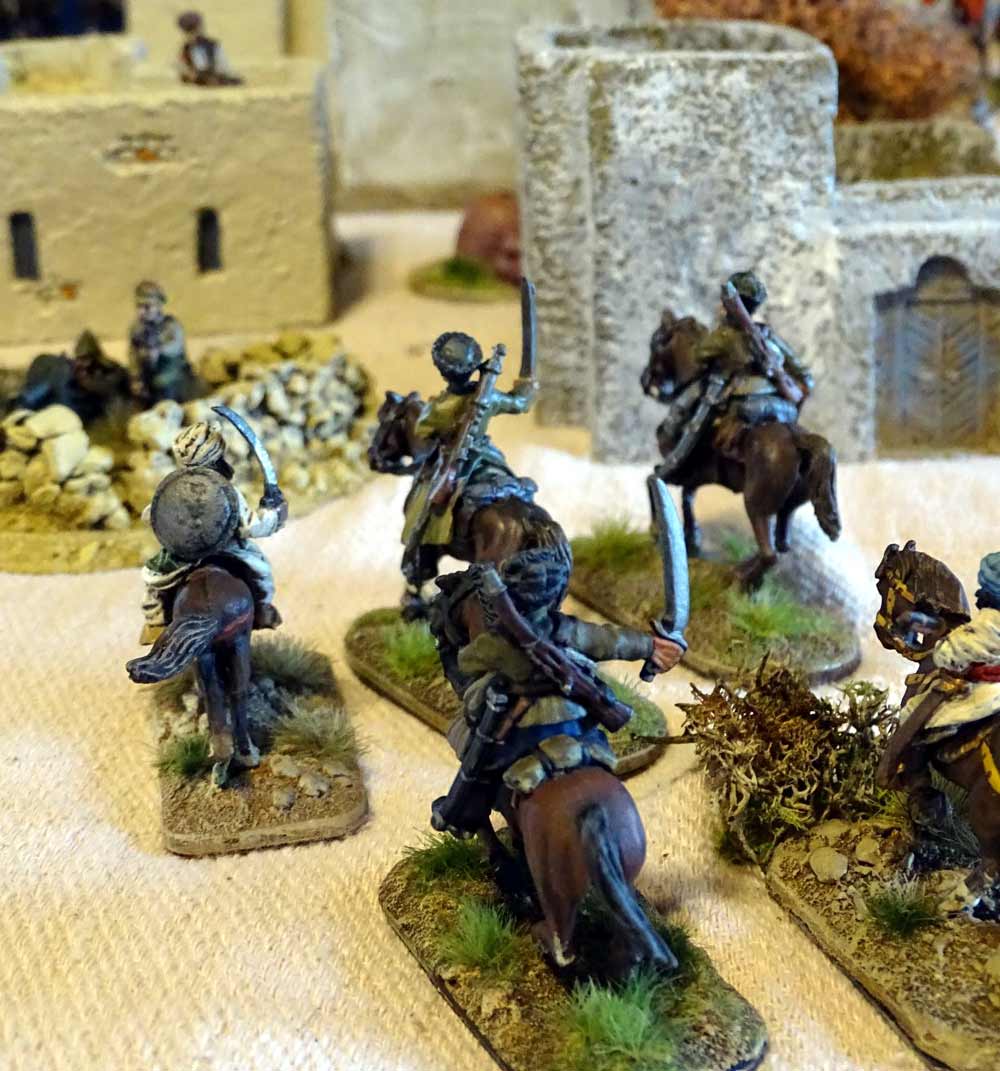 Then, as more of our troops arrived from the north, the White air force arrived. A Camel flew on from the south. After strafing its way across the town, it tried bombing our cavalry behind the barracks, but missed. Then it flew off, without achieving very much at all. Still, it looked good and Lindsay had fun “flying” it! Meanwhile the Whites were feeling resistance stiffen as fresh Bolo troops arrived.

By now, the town square was being fought over by both sides.  The place though, was dominated by the White armoured car. To the south of the square, the Cheka in the mosque had suffered a lot of casualties,  were still holding on – a thorn in the site of Osipov’s counter-revolutionaries. By now the White cavalry had been destroyed, but the Reds still had two units, waiting for the right moment. 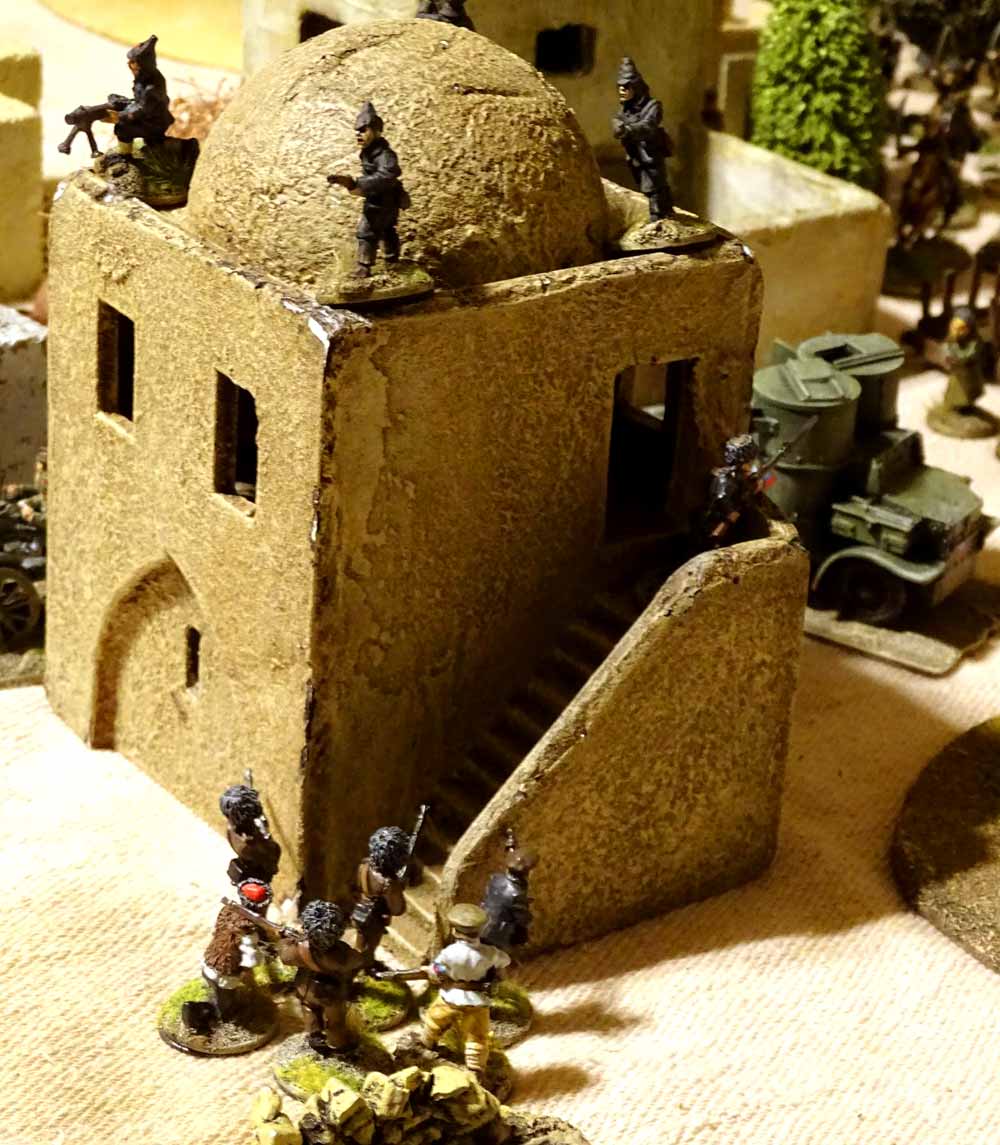 The White conscripts tried to storm the mosque twice, but a band of Cheka held out on the upper floor, defying every attempt to flush them out. In the end, the Cheka wiped out two White units, and so the attackers went elsewhere in search of easier pickings. The fighting in the square was hotting up too. The White armoured car was looking vulnerable, now that it had been stripped of its infantry support. The Bolo infantry closed in, while Commissar Dunkov kept rolling for his own armoured car to appear – and it never did… 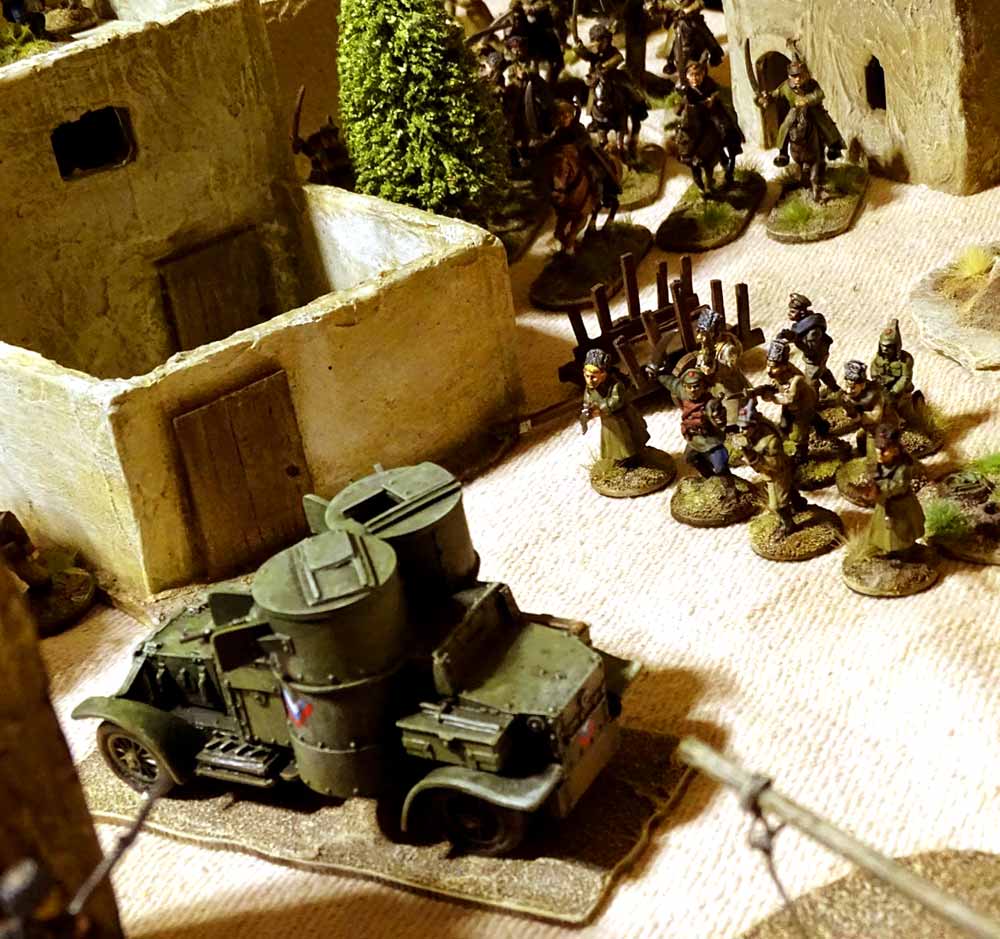 That, unfortunately, is where we had to end the game. The Whites had done well, but their attempt to capture Tashkent – measured by those three key buildings – had got nowhere. The Bolos still held them all. The White armoured car still dominated the square, but the Bolos were massing for a close assault with grenades and molotov cocktails. So, things didn’t look too rosy for the crew.In the end then, we judged the game to be a close-run victory for the Bolsheviks. The stars of the game were, of course, the Cheka, although both the White railway workers and field gun crews had worked wonders too. Most importantly, the game was great fun! 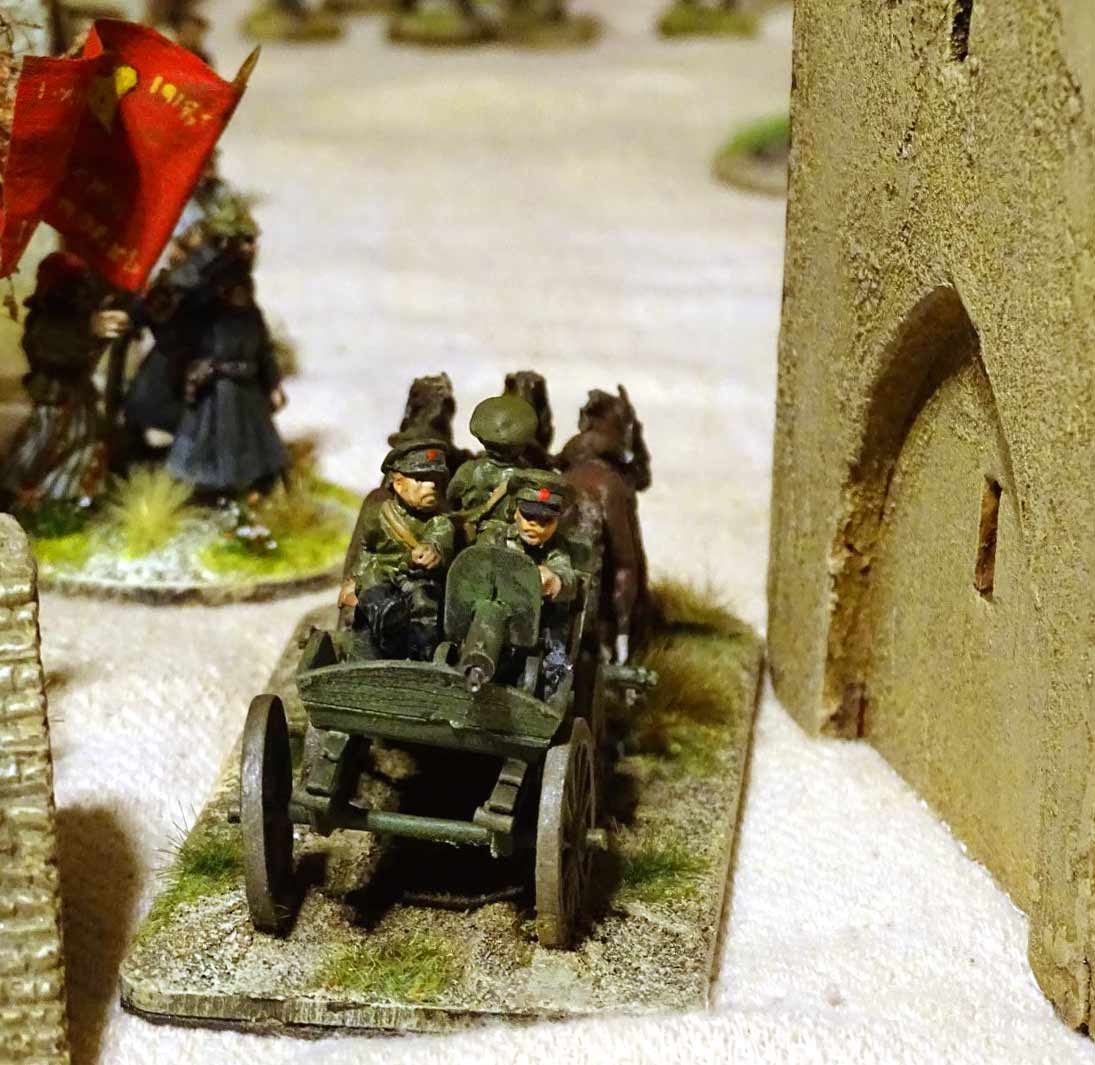