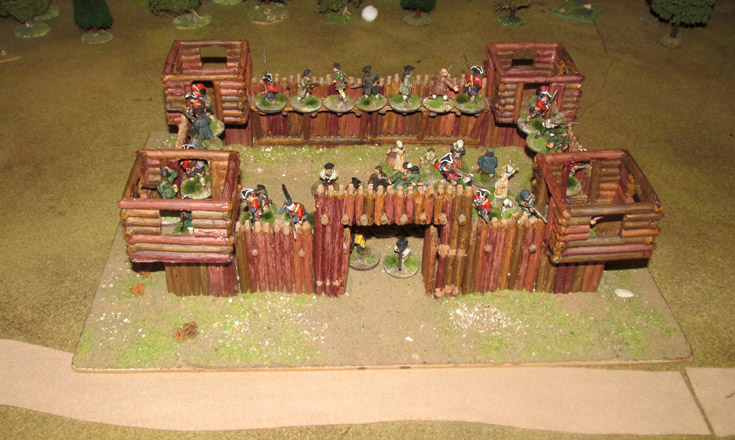 Recently the Edinburgh club bought three big boxes full of trees – and we decided to put some of them to good use. We hadn’t played a French & Indian War game for some time, and so this week we returned to the forests of North America to battle for control of the continent. In this game, played out on an 8 x 6 foot table, the British held a fort – named Fort William as Bill Gilchrist supplied it – placed in the centre of a clearing close to on one short side of the table (we called it the eastern edge). The two long edges were the north and south table edges. The small garrison (12 regulars, 18 militia, 6 rangers) was being besieged by a larger force of French troops. However, a British relief force was on its way, and would enter the board from a track leading off from the far diagonal corner of the table from the fort. That would be the south-western edge. Where the track joined another, a “blocking force” of 36 Indians and 6 French trappers were waiting, led by Chief Big Beaver (aka Jack Glanville).

Derek Hodge’s besiegers consisted of  12 French regulars, 12 Companie de Marines and 16 Canadian militia, while Bill led 12 Highland regulars, 12 Colonial regulars, 8 British light infantry and 8 rangers. Michael Schneider (“German Michael”) commanded the fort. His objective was to hold the fort until the end of the game, and to protect the dozen women and children sheltering inside its walls. Derek had to take the fort, Bill to relieve it, and Jack to stop Bill. Each of the four players had two officers, one of which was their alter ego. That figure had a “sub plot”, which only they knew about. Whether they achieved their sub plot mission would only be revealed at the end of the game. I played the role of umpire, hindered a little by the fact that it had been six months since I’d last picked up the rules.

The game began with Derek’s Frenchmen sniping at the defenders at long range from the cover of the woods. Some of Jack’s Indians joined in too from the western side of the fort. Michael’s garrison replied, but despite killing the odd Frenchman, it was clear that the defenders were rather outgunned. So, relief was imperative.  Fortunately, Bill was on his way. Rather, his troops were slowly moving forward, but after coming under heavy fire from Jack’s Indians his grenadiers withdrew back to the table edge, followed by the Colonial regulars. So, it was up to the lights and the rangers to lead the way, assisted Hawkeye and his last Mohicans, who sniped away at the Canadian militia on the relief column’s right flank. Still, progress was slow – virtually non-existent.

Meanwhile, strange things were happening at the fort. First, emboldened by causing a few casualties, the French advanced into the clearing to shorten the range. The French regulars then delivered a couple of crashing volleys, killing three of the remaining 11 British regulars in the garrison. this prompted a Recoil Test which Michael failed with aplomb. So, the regulars fled the field – jumping over the back wall of the fort and heading into the trees. The defending militia weren’t having such a good time of it either. One six man unit was reduced to just two men, and it broke too, while the others kept being driven from the walls by accurate French fire.

Then the fort gates opened. Out poured the women and children, running for the cover of the woods. It seems Michael had decided to save them by letting them run for it. Instead they met the detachment of French regulars, who showed a distinct lack of chivalry as they hatcheted them all to death.  Undeterred, Captain Wilkinson – the fort’s regular British commander – sallied out too, charging the French and falling on a French bayonet. It seems Michael’#s “sub plot” was to die heroically – something he achieved with gusto.

A few turns before, a special event roll determined that night was falling. it now fell, making it all but impossible for the British regulars of the relief column to make any headway against the Indians skulking out there in the trees and the darkness. So, Bill formed a defensive perimeter, and the besieged garrison were left to their own devices.  That was pretty much it – by now most of Michael’s militia were dead or had run away, leaving just five rangers to hold the walls. As the game ended the Indians were on the ramparts, having scaled the now undefended back wall, while the French marines and regulars were blazing away at the walls from point-blank range. So, the game ended in what was clearly a French victory. Jack had achieved his objective – as had Derek – killing the civilians inside the fort. The fact that he did it outside the walls was largely irrelevant. Both French payers also fulfilled their largely defensive “sub-plots”, while on the British side only Michael achieved his – a heroic death.

All in all it was an enjoyable game, despite the growing pessimism on the British side, and some minor exchanges between besiegers and besieged over who was doing what, where and why. Of course the rules don’t adequately cover the defence of forts, but I think our ad-hoc house rules did the trick. Not only was the game fun – especially for the French – but it was also pretty. A combination of Bill’;s fort and all those trees made it a table that really looked the part.