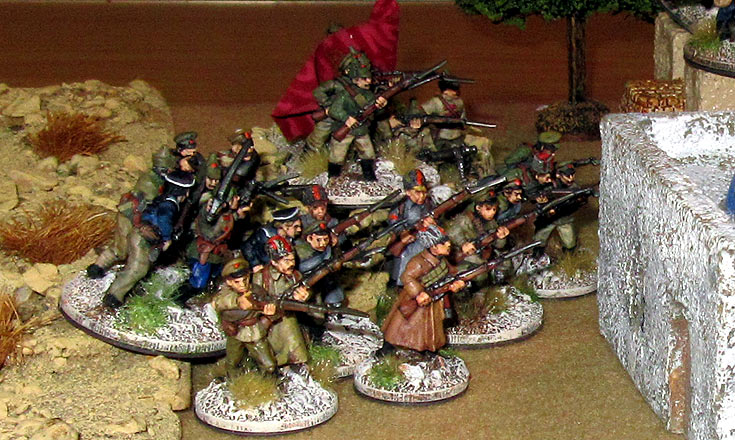 The Back of Beyond, The Men Who Would be Kings, 28mm

We planned a multi-player Back of Beyond affair for our pre-Christmas game, but one player had to back out. So, I came up with a three player game instead. The inspiration was this cartoon entitled “Save me from my friends”, with a voracious Russian bear and British lion prowling around an Afghani leader. So, in this one Sean 2 was the Bolshevik bear, Sean 2 the Imperial lion, while I took the part of Khazi Khan, the guardian of the Afghan stronghold of Doo Lali. 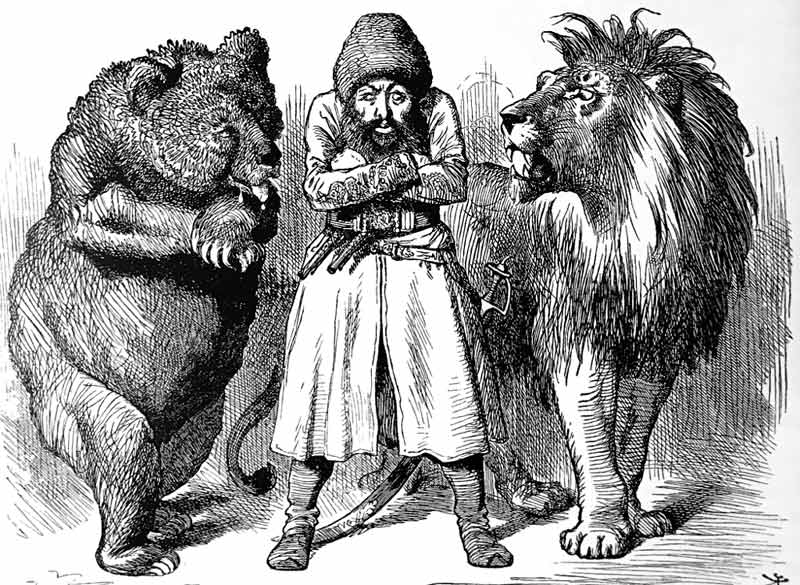 The idea was that a small Bolshevik column had entered Afghanistan, and planned to capture Do Lali, and then use it as a base for operations across the border into British India. The British got wind of this, and sent their own small column to stop the “Bolos”. The scene was set for a small but perfectly formed Back of Beyond game, centred around the clash of the three forces. 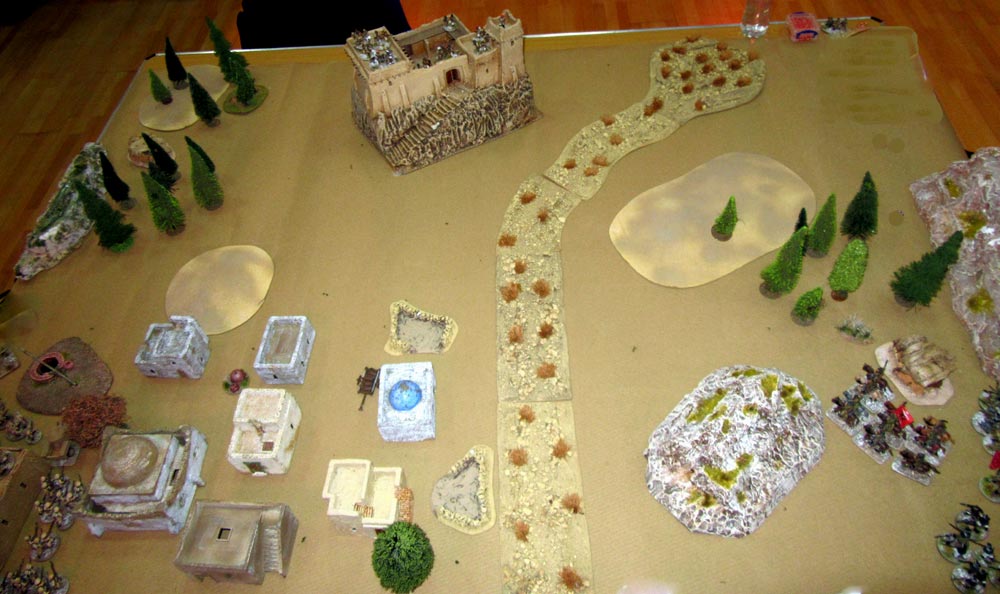 This was a little unusual, as until now all my “Back of Beyond” games had been played using  Setting the East Ablaze, or its forerunner Contemptible Little Armies. So, using a set of grand skirmish colonial rules was something of a gamble. I’d come up with some house rules to suit things like armoured cars, but otherwise we pretty much played it “out of the tin”. In the end it worked like a charm. 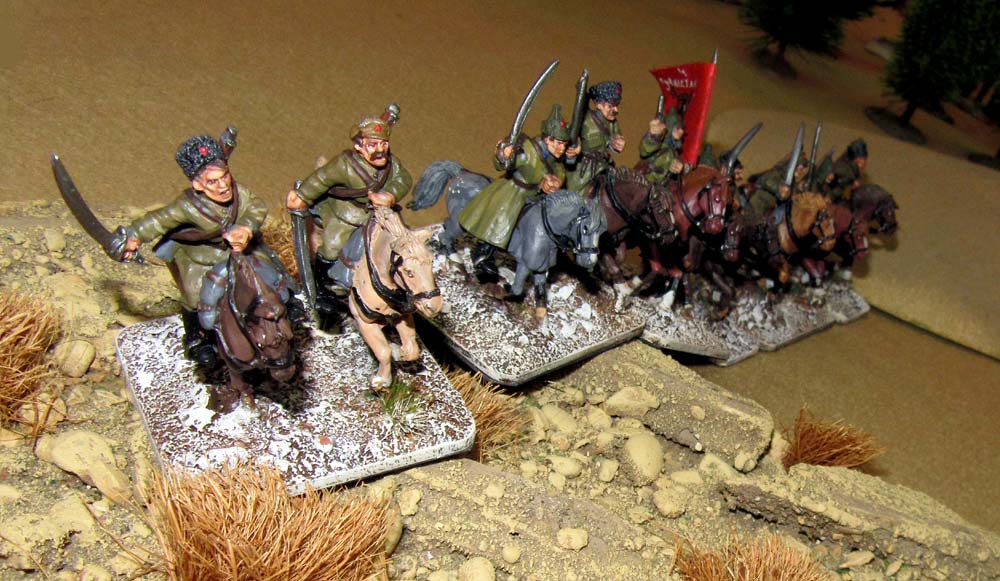 One change was that to cope with three players I put different coloured dice in a bag. When the right colour came out, that player could activate all his units. It worked nicely. Another change was that instead of each unit having a leader, I had one leader for each of the three forces. The 6×4 foot table featured the stronghold of Doo Lali, a nearby village, a dried up nullah, and some rough ground.

The British came on first, heading through Doo Lali village towards the fort. Their leader, Colonel Lisle-Page had three 12 man infantry units at his disposal, one from the North Staffords and the rest from the 36th Sikhs. Yes, I know the British should have had Wolseley helmets by then, but mine didn’t! He also had an 18-pdr. field gun, a machine gun team and a unit of 8 Bengal Lancers. 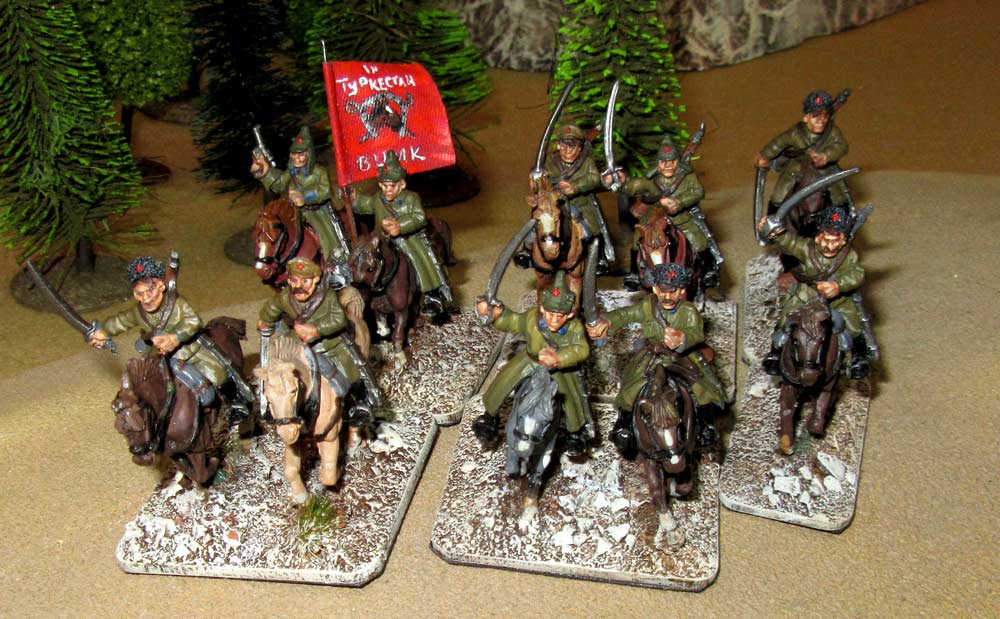 Next came Sean 1’s Bolos, with a similar-sized force – three 12-man infantry units (one of Caspian Sea Fleet sailors), a tschanka, a unit of 10 Red Army cavalry, and an Austin-Putilov armoured car. They were led by Commissar Stolishnaya. Strangely, rather than head for the fort, the bulk of the Bolo force made straight for the village, and the British. 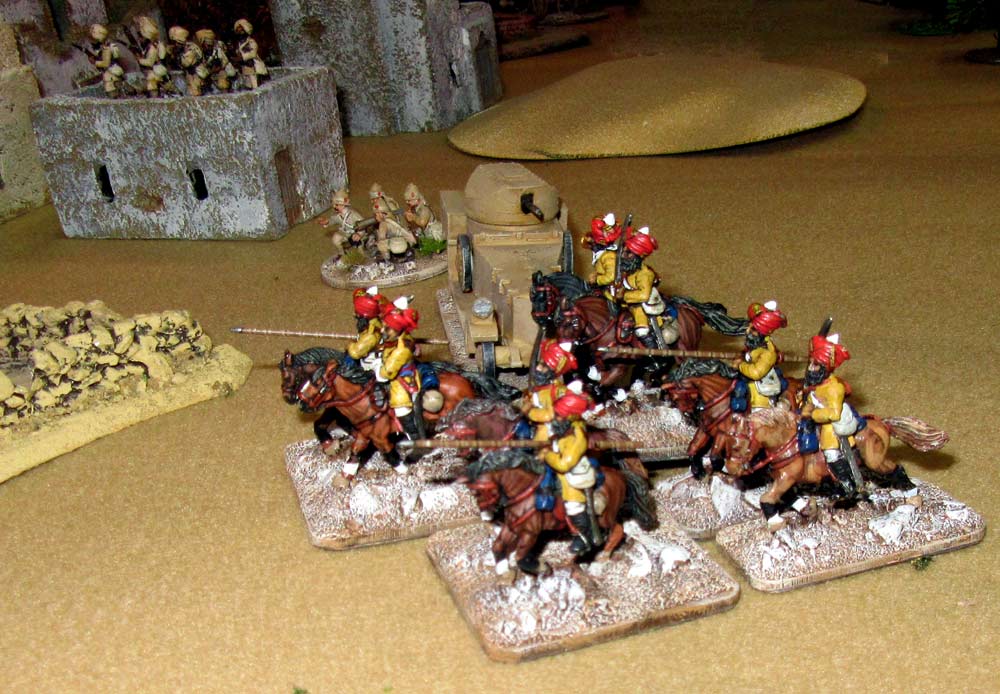 Soon both armoured cars were dueling with each other. I’d come up with Anti-tank rules for AFVs, and anything from LMGs upwards have a chance of damaging them. They can also be close assaulted by infantry armed with bombs (grenades). This didn’t achieve much, so once it suffered some damage the Bolo car moved off to support the attack on the village.

The Bolo cavalry circled round to attack them, prompting the British to counter it with a counter-charge by the BEngal lancers. The two sides met up around the nullah, and in the melee they effectively wiped each other out!  The remaining lancers were removed from the table, while the Red Cavalry were reduced to two figures, who promptly hid in the nullah. 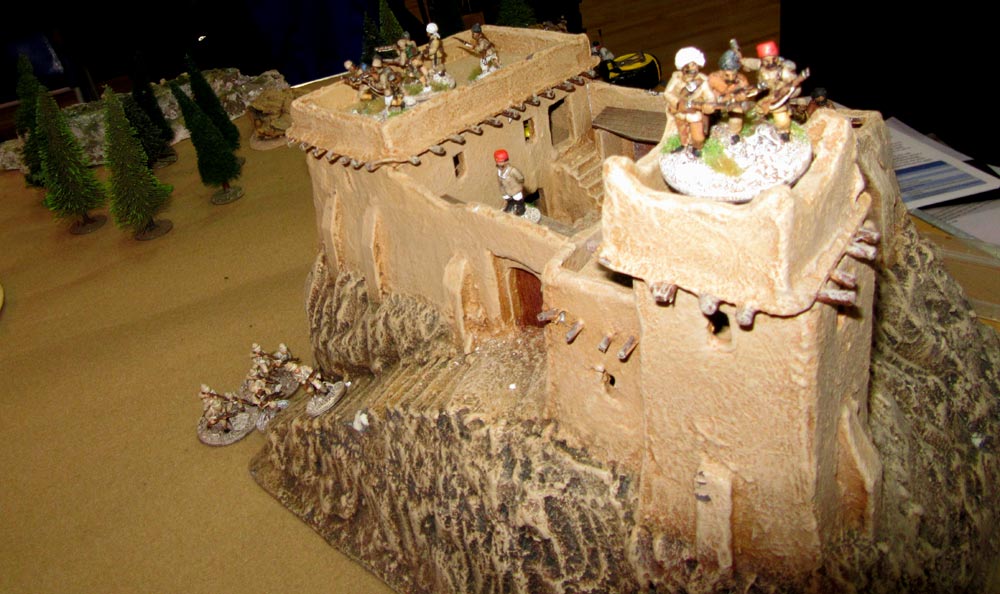 Meanwhile the action was hotting up around Doo Lali. The afghan garrison of a gun and two 12 man units didn’t do much, apart from shooting at anyone who came close – at least they did before their gun was knocked out by the more powerful British 18-pdr. This helped covered a rush towards the base of the fort by the Staffords. There they stayed, lacking the strength to storm the place. 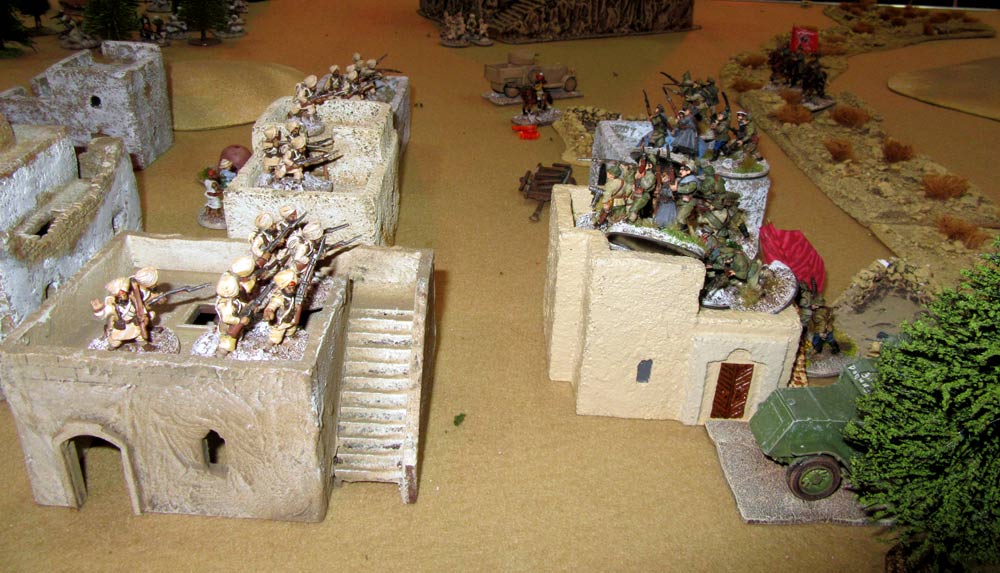 Back in the village the rest of the infantry were fighting it out, with the sailors being slaughtered to a man by the Sikh rifles and LMGs. It was like a mini Central Asian Stalingrad, with bullets flying everywhere. Although the Bolos got the worst of the firefight, neither the British or the Russians succeeded in subduing their opponents throughout the game. Both players had great fun trying though! 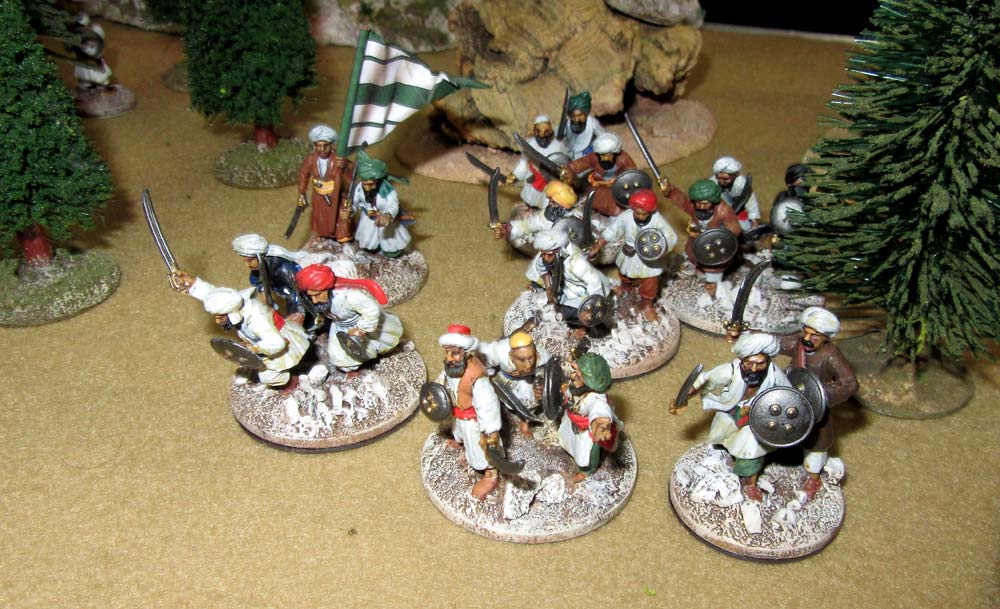 Then, to make things more interesting the Pathan tribesmen appeared, as allies of the Afghan regulars. They didn’t achieve much – the Pathan infantry were under strict orders not to get too closely involved. They suffered badly too, with a unit of swordsmen forced to withdraw into the woods thanks to British machine gun, rifle and artillery fire, and another unit next to them driven off the table. 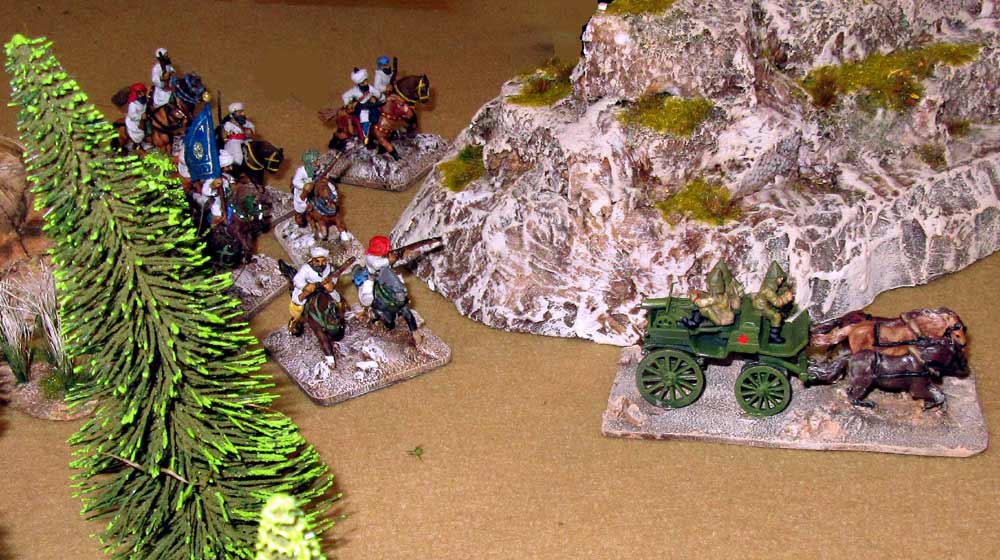 One of the highlights of the game though, came when the tschanka was charged by Pathan tribal cavalry. Its machine gun was dismounted at the time, but they managed to throw it into the card and evade the charge. The rest of the game they ineffectively fired at their pursuers as they raced away to safety. That’s pretty much where the game ended – a stalemate in the village, and neither side really able to take the fort. So, we called the game a win for the Afghans, who after all were still in possession of Doo Lali. It was all great fun though – splendid nonsense – and the rules worked a treat. So much so, in fact, that they’ll be my “go to” ones for future “Back of Beyond” scraps! It also reminded me just how much I truly love this period, and those slightly crazy “BoB” games!