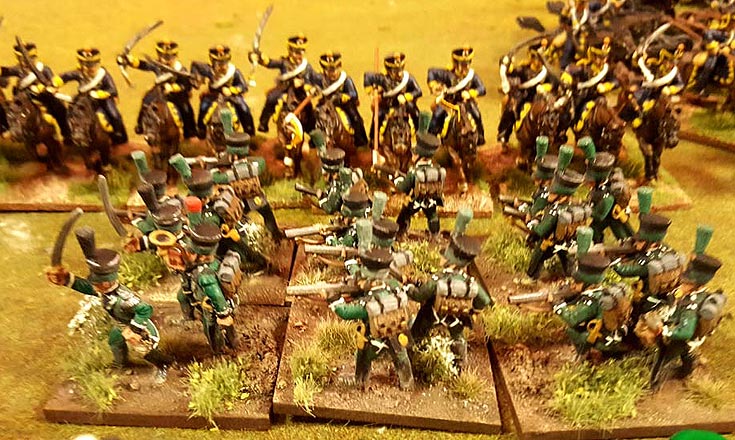 It isn’t often that something happens on the wargame table that makes your jaw drop. Well, apart from rampant gamesmanship that is.  It certainly did in this game, and so has already gone down in history as it included the most spectacular tabletop charge I can ever remember. The scenario was chosen by Campbell, who wanted to give his Württembergers an outing. It came from Charles S. Grant and Stuart Asquith’s little book Scenarios for All Ages (1985), and was entitled “Encirclement or Breakout”. In this game, set in the Invasion of Russia in 1812, the Württembergers  were encircled, and had to do something about it.

The premise was that the Württembergers  had been pursuing a smaller Russian force through the countryside, heading towards Drissa and Polotsk. In the process they outstripped the rest of Ney’s III Corps, and found themselves all on their own. At that point two other Russian columns appeared on the flank and rear. As the Prince of Württemberg, Campbell’s job now was to  escape off the table with most of his force intact. The map above shows the basic set-up. The Württembergers  were “Red force”, with six infantry battalions, three cavalry regiments and two batteries. They deployed in the centre of the 8×6 foot table, facing “Blue column” 2.

For the Russians, Michael’s column1 was made up of three battalions, two cavalry regiments and a horse battery, while Peter’s column 3 had five battalions and a battery. My own column 2 – the original target of the Württemberg advance – had three battalions, three cavalry regiments and a battery. With hindsight, what we should have done was to let Campbell and Mike (playing the Württembergers) the chance to go first. After all, they were the ones with their head in the noose. instead we diced to see who had the initiative, and the Russians got to go first. We closed in from all three directions, thereby making it that little bit harder for the Germans to escape.

The Württembergers responded by fanning their cavalry out in an attempt to pin columns 2 and 3, and then sending everyone else marching as fast as they could off the western table edge. On the map above, that’s the one between columns 1 and 2. That placed him further away from Peter’s column 3, but it brought him tantalisingly close to my guys. by that time my infantry were poised in three battalion assault columns, and my cavalry deployed on their left, with my dragoons and one half of the Marioupol hussars facing off the German chevaux-legers, and the rest hanging around looking for targets of opportunity. Then they spotted a really juicy one.

When my turn came I launched my infantry brigade in three charges, each of which struck the head of a Württemberg infantry column. The cavalry on my left charged the chevaux-legers, which left the right-hand division of the Marioupol hussars eyeing up the closest enemy unit – a battalion of Württemberg jaegers. Best of all, the jaegers were in column, with their flank facing my hussars. Naturally enough I charged the hussars into it!

We resolved the infantry melees first. In all three of them, both sides wore themselves down, but in all but one case the Germans had the worst of the exchange. By the end, all three of their battalions had retired a little, and were suffering from being low fatigue strength – these rules’ equivalent of strength points. My infantry were battered, but still very much in the game. So, all in all a good result – the Germans weren’t going to get off the table as easily as they’d hoped. Now it was the turn of the hussars.

The charge came in from pretty short range, and so the poor jaegers didn’t have chance to form square. They were duly ridden down. When a unit breaks, all others of the same side within a certain distance get a fatigue hit. So, that put Campbell’s battered infantry even closer to breaking themselves. Things were going well, and I still had an exploitation charge to enjoy!

The next target was a gun battery, so the charge continued into these limbered guns. Naturally enough they went too, causing another fatigue hit,  which in turn caused the closest column of Württemberg infantry to break. With that potential speed bump out of the way the cavalry rode down the next gun battery, before ending what was probably the most successful charge in the Marioupol hussars’ history!

We still weren’t done though. Over on my left the rest of my cavalry brigade had charged the Württemberg cheveaux-legers, with both sides meeting on the crest of a small hill. In Over the Hills you get three rounds to a melee, if someone doesn’t run away. I had two cavalry units against one, so I could choose the best result of the two, and apply that. This got me through the first phase, when my column formation placed me at a disadvantage. After that my horsemen fanned out into line, and the melee continued, ending on the third round with the cheveaux-legers breaking and running.

I wanted to catch the Württemberg dragoons in the flank, as you can see above, but they got their charge in first, hurling themselves against two battalions of Russian infantry from Peter’s Force 3. One of the battalions formed emergency square, but the other was caught in column. It was duly broken by the cavalry, but the square held, and the dragoons were forced to retire. That, of course, put them back in the path of my own dragoons, who duly finished off job.

On what turned out to be the final turn, what remained of the Württemberg foot headed at full speed towards the table edge. Campbell had just three battalions left, as another one of those battered by the Russian infantry had broken. Still, he DID manage to break out of the encirclement with them, and while we could have pursued, we decided to call it a day. Campbell and Mike’s goal was was to get 80% of their force off the table, while we had to kill 60% of his. In the end the tally was 36% escaping off the table, and 64% killed or captured by the Russians. So, whichever way you cut it, this was an emphatic Russian victory – and the Marioupol’s finest hour!  We hadn’t used the rules for a while, but they worked well, and produced a tense and entertaining game.

4 Responses “The Massacre of Daugieliszki, 1812”