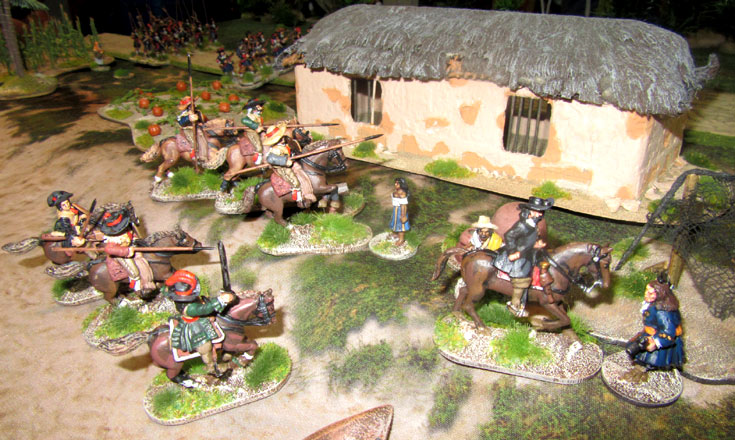 This week I “rolled out” a new period. I meant to do this two weeks ago, but the heavy snow forced it to be postponed. Actually, this isn’t really a new period at all, but the re-branding of an old one. I’ve had most of these Foundry pirate figures for years, but I recently decided to dust them off, sell the ones in tricornes, and turn the rest into 17th century buccaneers. I also added a Spanish force to fight them, and a few bits and pieces of scenery. The result is this game – “The King’s Gold”, set on the coast of the Spanish Main.

Each year, gold from the mint in Bogota was shipped north to Cartagena, where it was loaded onto treasure galleons, along with emeralds, spices and other high-commodity items from New Granada (now Colombia and Venezuela).  Our game surmised that part of the gold was being transported in pack mules north to the coast, then along it to the port. Somewhere near the little fishing hamlet of Santiago de Tolu, a force of buccaneers lay in ambush, waiting for the treasure to turn up. To increase the odds, and by way of diversion, the Speedwell sloop is anchored just off the coast there, and this has attracted the attention of the Spanish militiamen guarding the mule train. While they were on the beach taking potshots at the sloop, the buccaneers emerged from the jungle.

However, this wouldn’t make a proper game of it. So, on turn two, a Spanish force appeared, charged with escorting the mule train into Cartagena. So, the scene was set for our first-ever game set in the heady era of the buccaneers. The rules we used were A Pikeman’s Lament – and actually the scenario came from there too – although we modified it slightly.

The game ended when all three bases of pack mules had been spirited off the table, escorted by a unit of troops. Whoever had the most treasure won the game. We played it out on a 6×4 foot table, with Campbell and Bart being the buccaneers, and Peter and I the Spanish.

We both had 24 points a side, with the bystanders having  six units (four shot, one “forlorn hope” and one “commanded shot” – a skirmish unit of Cimaroons’ while the Spanish had four shot units ( two were raw), plus a like unit, a cavalry unit, and 6 “commanded shot” – a unit of 6 skirmishing Indians. The two Spanish raw shot units started the game on the beach, taking potshots at the Speedwell. That meant they left the mule train unguarded. At that moment, the buccaneers emerged from the jungle, which fringed the southern table edge.

Each of us had a leader, picked randomly from a selection I’d generated before the game. Everyone had a traid, so Bart’s Lieutenant William Youngblood was a veteran of the Civil Wars, Campbell’s Captain Thadeus Makepeace was a strong, hot-headed fellow, Peter’s Captain Pedro Mendoza was a lion on the battlefield, and to my own Lieutenant Berto Javier y Ortega, honour was everything, and he was an accomplished duellist.

In A Pikeman’s Lament, you have to roll over a certain amount to activate a unit. When you fail an activation, your turn ends. On turn 1 I rolled a “double 1”, which means a special event. In my case it was the routing of both units of Spanish militia- the raw shot. So, the mule train was completely unguarded, and at the mercy of the buccaneers emerging from the jungle. This was going to be a short game!

Worse was to follow. On turn 2, when our reinforcmeents arrived from the direction of Cartagena (the eastern table edge), after the arrival of a unit of six Indian allies, both Peter and I failed our activations, so nothing else appeared! Meanwhile the buccaneers were closing in on the mule train. It was clear they’d win the race. Each of the three mule train bases was a marker. it couldn’t move on lots own, but had to be escorted off the table, moving at 6″ a turn. Would we be able to stop them making off with the King’s gold?

By then though, at least we were coming onto the table. As Peter swung his militia shot out to take on Campbell’s buccaneers, I sent my cavalry galloping up the beach towards the fishing hut, and the waiting buccaneers. The closest buccaneer unit was the force of six “forlorn hope” troops – battle-hardened buccaneers with swords and axes. Then, Bart stopped the action, and challenged me to a duel!

In A Pikeman’s Lament you get extra Honour Points for fulfilling private missions. Bart clearly had “winning a duel” as his. What he didn’t know was that my Berto Xavier leading the cavalry was a duellist. So, in the fight to the death that followed, William Younglbood got run through by sharp Toledo steel!

By now though, it was clear that we’d pretty much lost the game. Two of the three mule train bases had been spirited away into the jungle. that though, left the buccaneers with fewer troops on the table. So, we were out for revenge. My cavalry – the dragones a cuera – charged the buccaneer forlorn hope, but got repulsed. Still, in the subsequent morale test  Bart rolled badly, and the forlorn hope routed from the field.

Over on the other side of the table the cimaroons and my Indian allies were trading shots, with the runaway slaves hiding out among some ruins in the jungle. I never actually managed to hit any of them, and my indians led a pretty charmed life too. However, they shot a pikeman, as the block were marching onto the field.

The weight of numbers was now working in the Spanish favour. Screened by the shot troops, the pikemen advanced and charged into the buccaneers. Both sides suffered, but the buccaneers were pushed back, and began melting away towards the safety of the jungle.

Meanwhile Bart rolled a “double 6” for an activation, and was rewarded with a fresh unit of buccaneers. I got the same result the next turn, and got one of my units of Spanish militia back. The buccaneers advanced to the line of fishing nets hanging out to dry beside the cottage, and using it as a screen they shot at my cavalry, which backed away. We were in the end game now though. All we could do was salvage something from the debacle of losing most of the gold.

We now had one of the three mule train bases, which the cavalry had spirited away, and handed over first to the Indians, and then a badly-depleted unit of Spanish regulars, which just had four men left in it. They escorted the mules off the table, and the game came to an end. Now we counted up the Honour Points. The buccaneers got four points – two for each mule train they got off the table. We got two points as well, for our one. I also got one for leading the first attack of the game with my cavalry, and another for winning a duel. that put us on four points apiece. however, it was Campbell, or rather Captain Makepeace who won the game. He garnered another two points for winning his private mission – killing more enemy units than he lost. So, it was a buccaneer victory!

It was also a really good game. Not only did it look very pretty, but it was great fun to play. Despite the Spanish setbacks at the start we rallied fairly well, and might have got a draw out of it if we’d been a little more cautious. Still, where’s the fun in that when Spanish honour is at stake, eh? The game rolled along really nicely, and everyone enjoyed the personal touch of having their own leader, with traits and personal missions. So, for a debut game in a new period this was a roaring success. Incidentally, the 6×4 foot mat we used was from Deepcut Studios, and really looked terrific. That, along with the maize fields, pumpkin patch, fishing nets, fisherman’s hut and jungle ruins really gave the table the look and feel of The Spanish Main. We all agreed we want to visit those shores again soon.