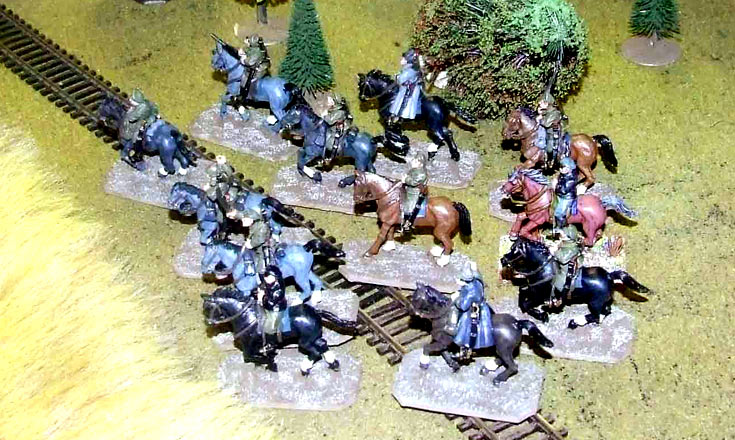 This lively little encounter came about for no other reason than we hadn’t played a Back of Beyond game for almost a year. It used to be one of our main wargaming staples, but for some reason it dropped by the wayside. I’ve no idea why – these games are always colourful, and with Chris Peers’ rules they’re also fast-moving and deadly!  This though, was one with a difference. The troops were the same, but the game was set in the wilds of central Russia.

The General premise was that White partisans had cut the Kaluga to Voronezh railway, and the suspicious Red Army commander in the area sent engineers out, backed up by a powerful mixed force of troops. He was right to be wary – the sabotage was the prelude to an advance by the Whites, commanded by General Denikin. Our little clash was part of this general advance, as Deniken was met by elements of General Tukhachevsky’s 5th Red Army.

Essentially, this was a line-up and advance game, with the hapless Partisan unit and the engineer party caught in the middle. On their right the Bolsheviks made short shrift of the White partisans, while both sides’ cavalry manoeuvred their way into the centre of the table, ready for an almighty clash. On the White right flank a determined advance by the officer battalions backed by field guns and an armoured car were met by sailors of the Red Banner Fleet, Cheka, Siberian marksmen and a smaller Red armoured jalopy. The two armoured cars sparred ineffectually like a pair of American Civil War ironclads, but the Red infantry met the advancing “yellow caps” of the White Samursky regiment with a hail of fire. While the Cheka were whittled down a fair bit (particularly when the White armoured car joined in), the “yellow caps” were virtually annihilated. Next came a charge by the main officer battalion, who piled into the Siberians. A furious melee followed, but once again the Reds held their ground, and when the sailors joined in the officers were slaughtered to a man.

The same Red success was repeated in the centre, where the White Cossacks met the Red Army cavalry in another big scrap, where the Reds eventually got the better of the fight. Any further success there was prevented by a hastily assembled line of White infantrymen, who kept the Red horsemen at bay until the end of the game. On the far right nothing much happened after the clash with the partisans, as both sides didn’t want to advance into the open to be slaughtered by the enemy.

This scrappy little game therefore ended with a clear Red victory, but one that left us too weak to press the attack and drive off the White reserves. As a result Denikin’s army lived to fight another day, and we all vowed not to leave it so long before we played another Back of Beyond game. After all, while they mightn’t please the purists, these rules produce highly enjoyable games, and ones that fairly zip along.