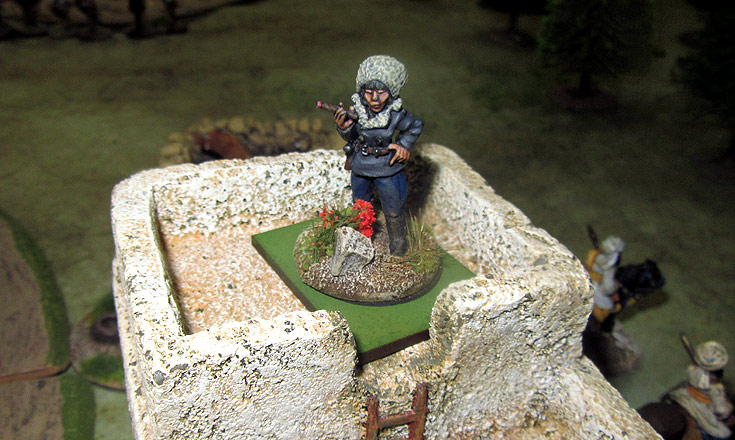 It’s been too long. Remind me not to leave it so long between “The Back of Beyond” games. They’re just so much fun. This was a small game though, as there were just three of us. So, I made it a “quest”, shamelessly stealing the scenario from a similar Viking and Saxon one, from the latest copy of Wargames, Soldiers & Strategy. In ours though, rather than searching for a Viking spy, our one was Raisa Pashin, a glamorous Bolshevik spy of Asiatic descent. The aim of both players was to find her, while keeping the enemy at bay. The figures were all from my “BoB” collection. 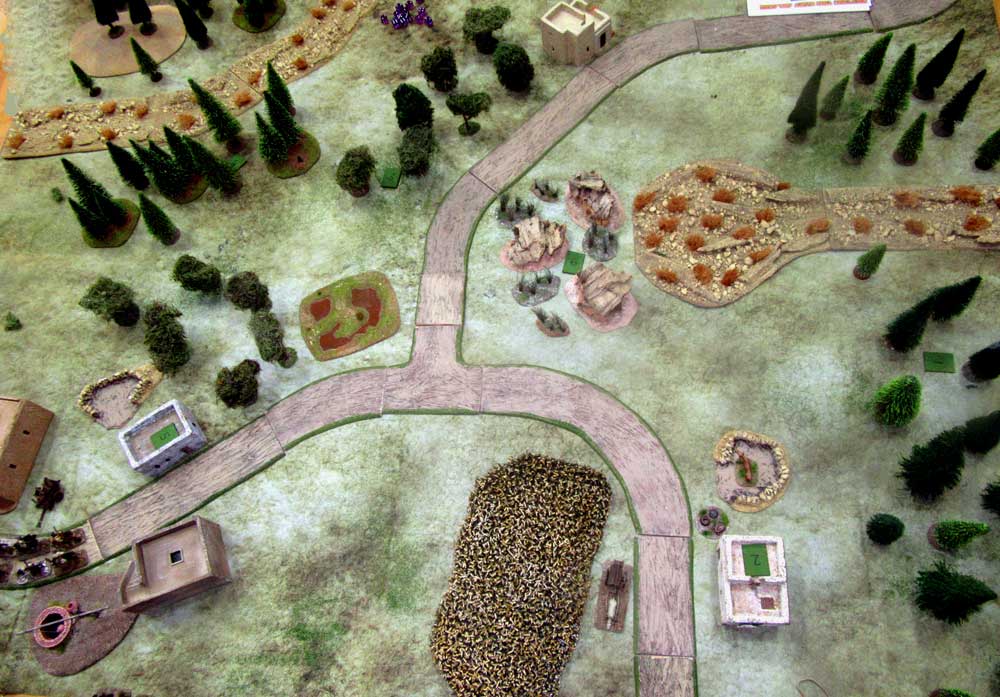 “Red Raisa” had been spying on the defences of the Emirate of Bokhara, and the effectiveness of the White mission there. She’d almost been captured, but escaped, and was now near Gishty, a small village between Bokhara and Samarkand. The Whites led by Colonel Smirnoff were out to catch her, while a small Red force led by Col Stolichnaya was there to rescue her. In our game, I ran it while Sean played the Reds, and Nick, newly arrived from Portsmouth, commanded the Whites. The game was played out on the 6×4 foot table you see above, with both players laying down three “likely hiding place” markers each, where Raisa might be holed up. 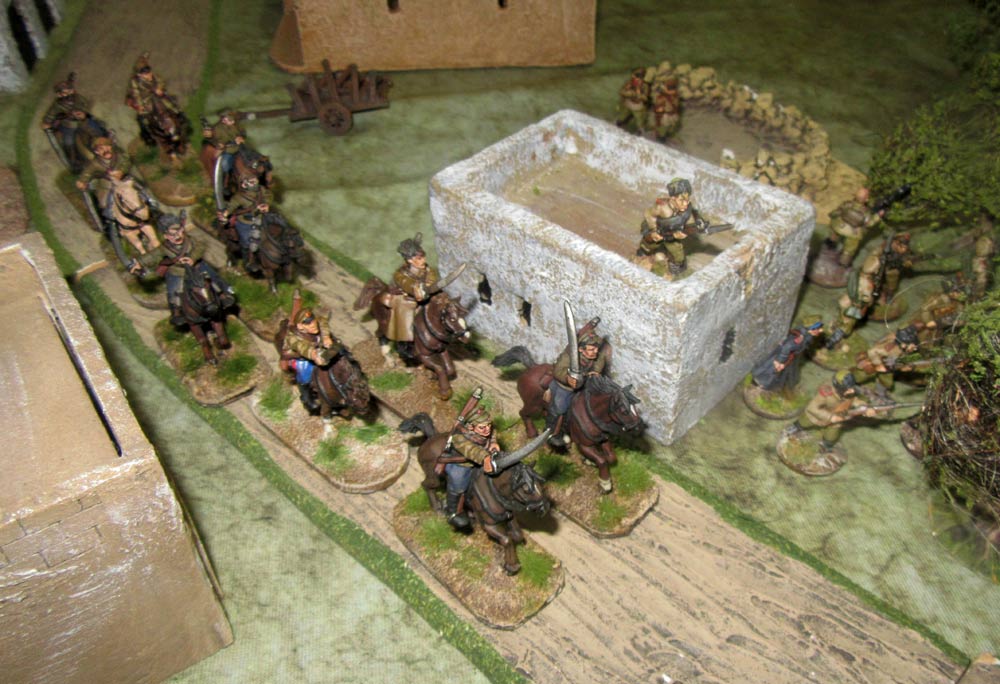 Both sides had similar forces, which entered in column of march from opposite (north-east and south-west) diagonal corners. The forces were broadly similar too, with each having a unit of 10 regular Cossacks, another of 18 irregular tribal allies, a unit of 20 irregular infantry and a tshanka – all led by their colonel. The Whites came on at Gishty, and the Reds from the NE corner. 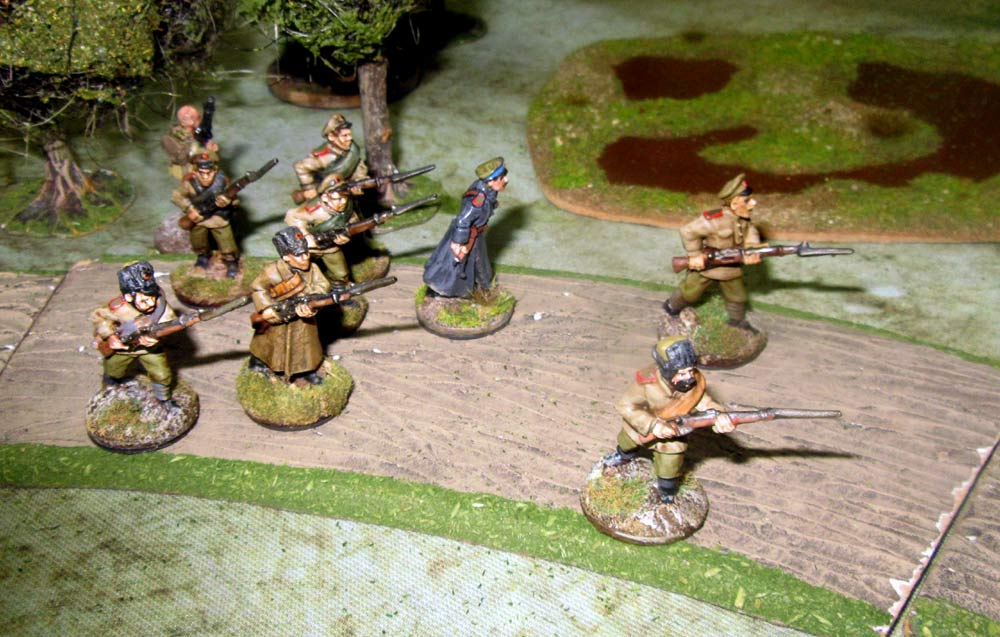 Both players got off to a good start, with Nick’s White regulars searching the building on the eastern side of the village where one of the markers was hidden, while Sean did the same with his irregular cavalry, combing the woods lining the eastern table edge. That’s when I revealed my special events. Every time you turn over a counter, you roll two D6, and something happens, ranging from losing a turn as you uncover a stash of vodka or a wasp’s nest (forcing the unit to run), to having a figure mauled by a bear in the woods. If you rolled a “12” though, you won the evening’s star prize – an Austin Putilov armoured car! Nobody though, managed to roll a “12”. 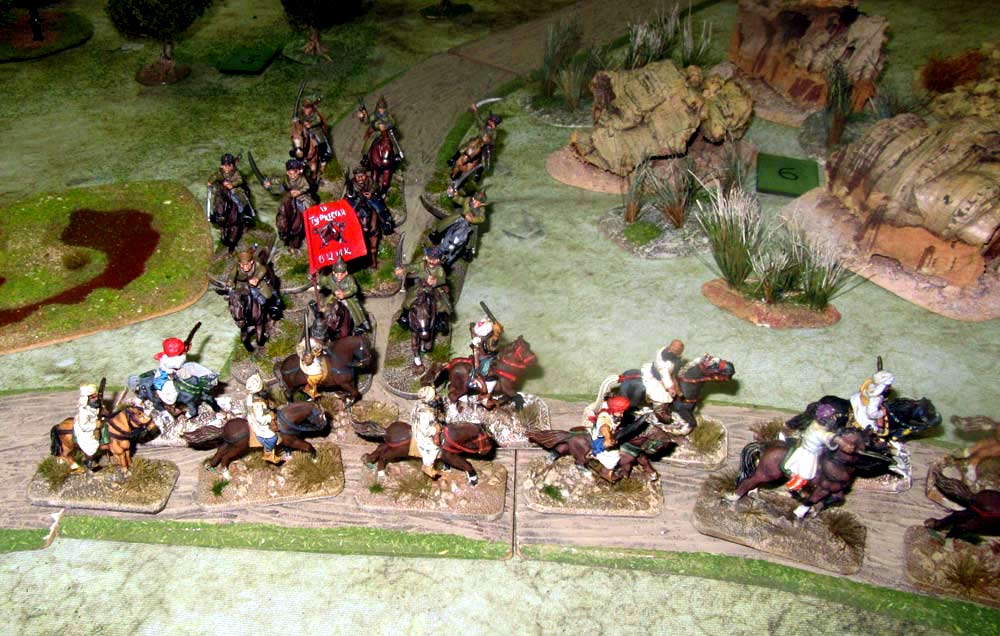 The opening fracas came when the Red Cavalry charged the Bokharan Irregular Horse near the “T junction in the centre of the table. Nick rolled well though, and both sides were “Supressed” through their losses and morale checks. Both cavalry units pulled back to regroup. Then, Nick dismounted his tschanka in a small grove, which turned it from a mounted LMG to a more effective HMG. 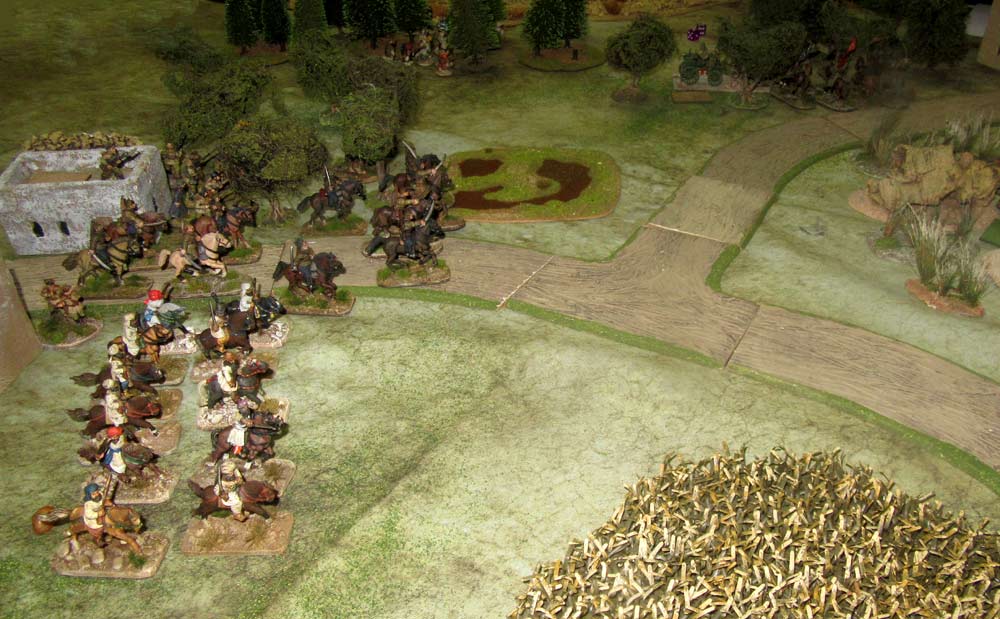 With that, he began shooting at the Red Cavalry, who hid in a small wood just off the road, and on the irregular Red Guards, who had come within machine gun range. They hid in a patch of boulders and scrub, at the end of a dried-up nullah. Sean tried and failed to remove his cavalry’s “suppressed” marker, so Nick grasped the chance, and charged in with his White Cossacks. The clash between the Red and White Cossacks also involved the Red tschanka, which had unwisely parked itself in the same little wood. 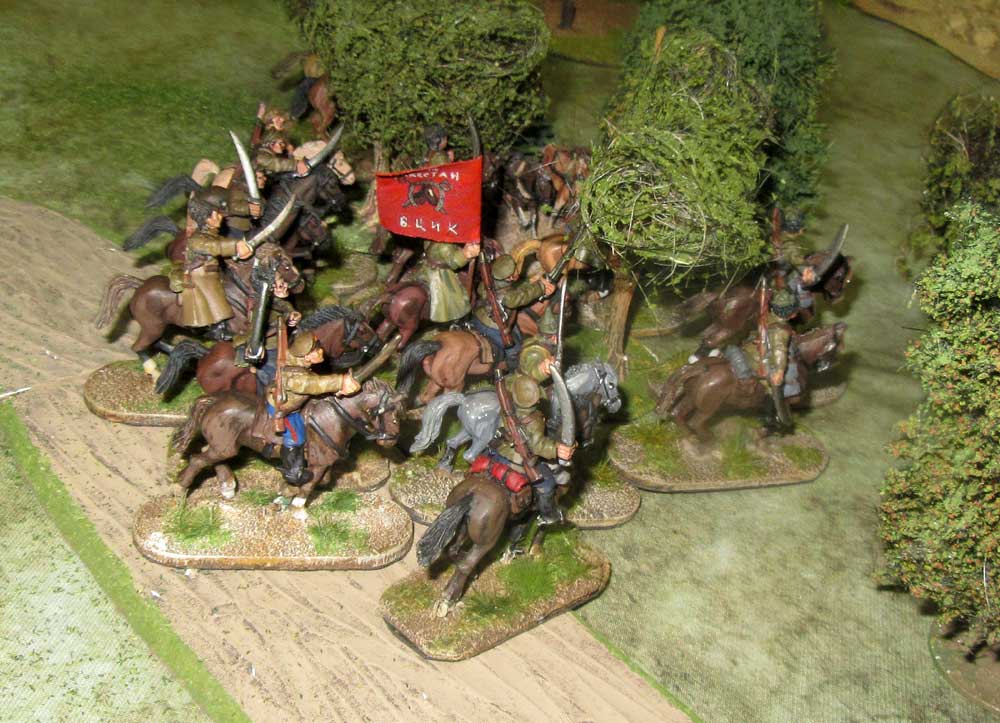 The melee was short, sharp and bloody. By its end, the Red Cossacks had been wiped out, as had the tshanka, but the White Cossacks had been whittled down a fair bit. By then though, Sean’s Cheka were in action, with their LMG, and their fire forced the White cavalry to retire to the west. They spent the next turn regrouping out of range, covered by the White HMG in the grove. 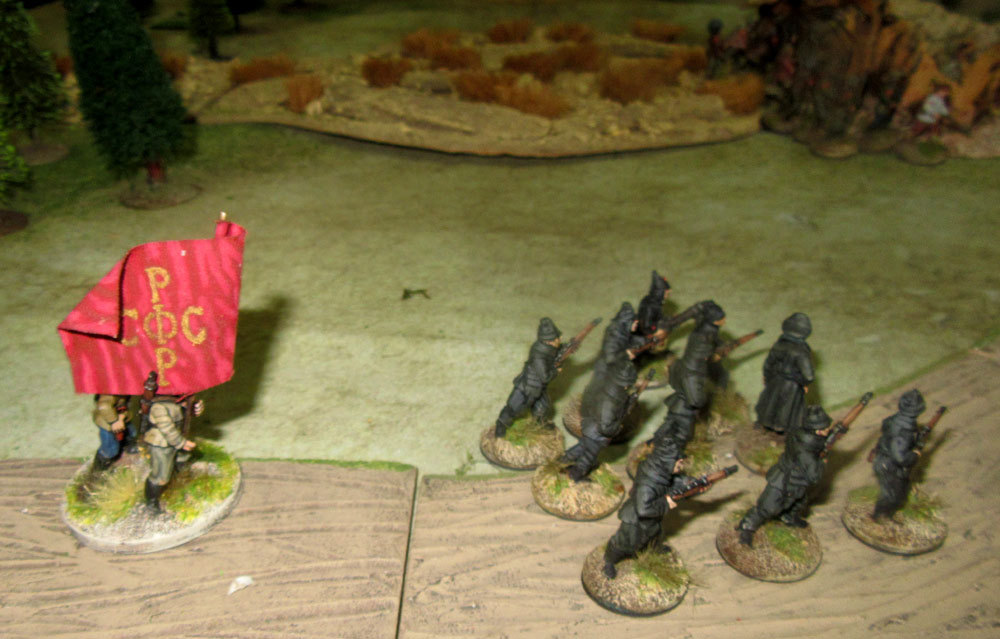 By now other counters had been found and turned over. One was in the woods in the north-west corner of the table, and another underneath the Red tshanka, which its crew hadn’t had a chance to explore. The White Cossacks searched there instead, while the Red Guards unearthed the fifth counter in amongst the boulders and scrub near the middle of the table. Plenty of wasp nests were found, or vodka, but there was no sign of our missing spy. That meant she had to be hiding under the sixth and last marker. 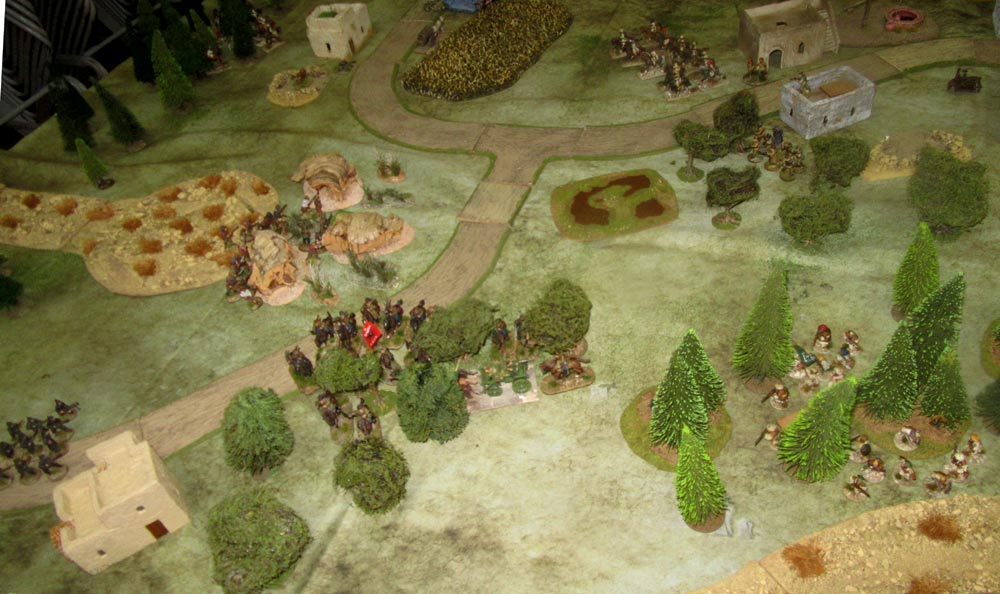 The trouble now was that nobody had much stuff in the area, apart from the opposing units of irregular cavalry, and the Red Guards  hiding amongst the boulders. They advanced towards the last hiding place – a peasant’s hut in the south-east part of the table, while both the Bokharan irregular horse and the Reds’ Basmachi tribal cavalry both headed towards the hut. 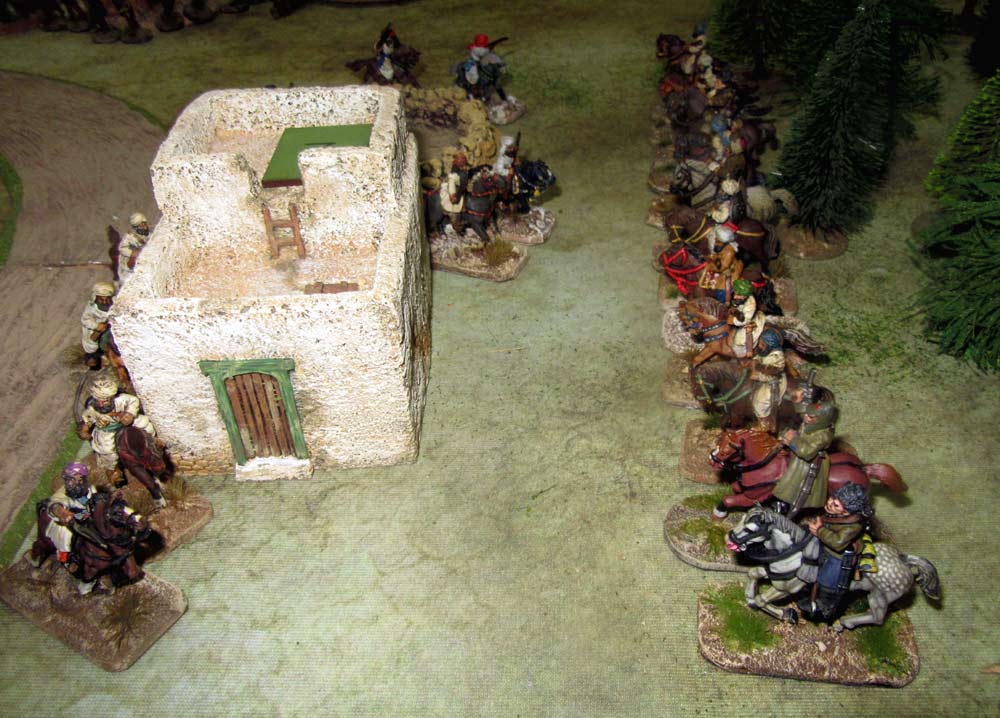 With both irregular cavalry units facing each other, it was inevitable that someone would charge. After all, they got a small bonus for being “ferocious” if they attacked. In fact, both sides hacked away at each other with great aplomb, and landed up with just a handful of figures left on each side. Both sides then retreated from the fray, thanks to failed moral checks. Raisa was still there in her hut. 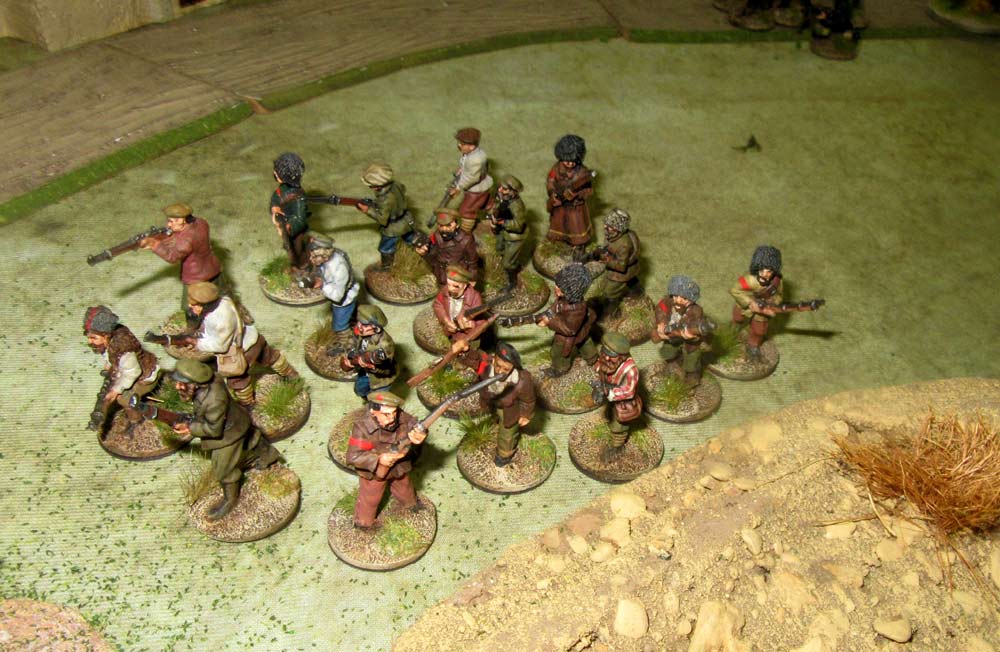 The final turn of the game saw the Red Guards (above) advancing towards the hut, but getting shot at by the White HMG, and the White Cossacks beginning their race to reach Raisa before their opponents did. We ended it there, with Raisa Pashin still at large, and nobody really in a position to reach her. In those circumstances the eminently capable Bolshevik spy probably made her own escape! Nick hadn’t played a Back of Beyond game before, and Sean hadn’t for several years. Both players though, quickly picked up the rules, and more importantly got into the spirit of the nonsense all. As a result, they both  had a really fun time. You always do with “BoB”! 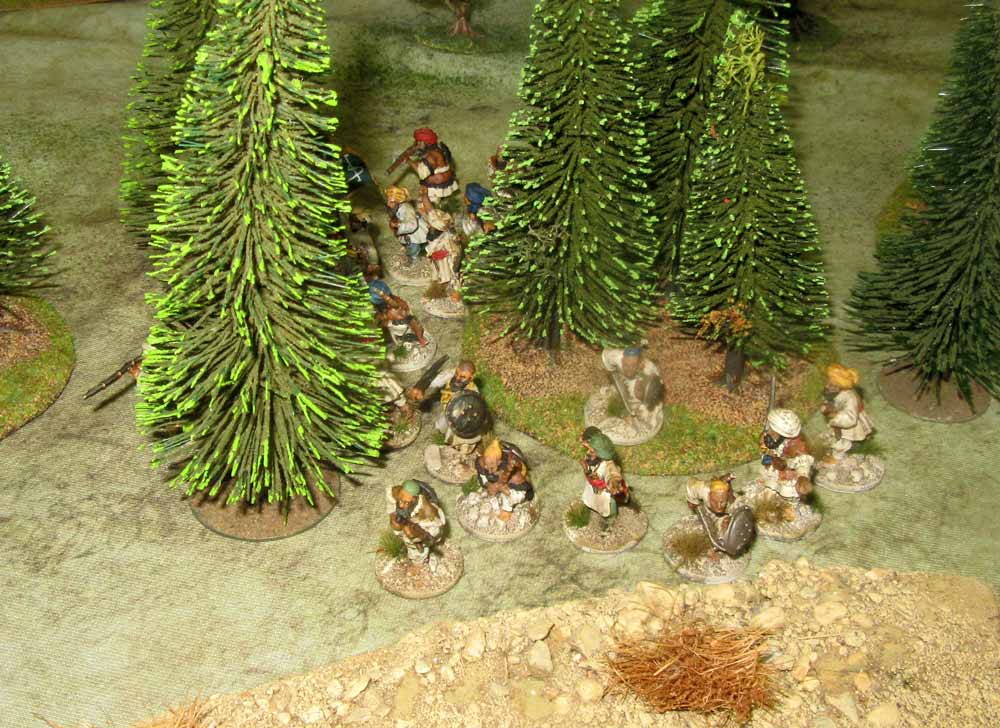