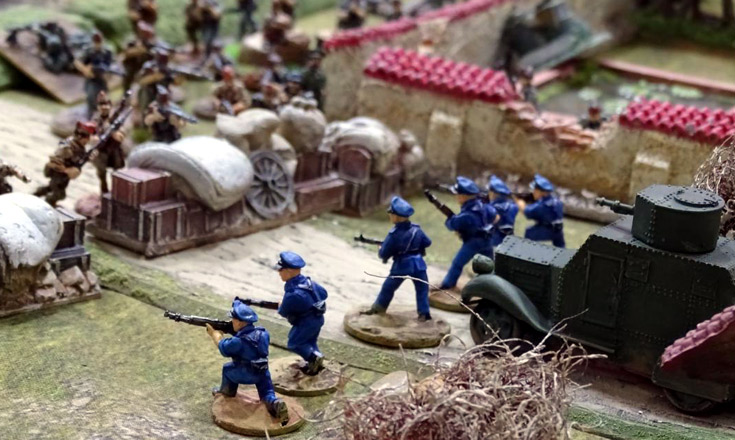 We decided to return to sun-kissed Spain this week, with an attack and defence game set in the Spanish Civil War. Just for a laugh we had the Anarchist militia doing the attacking, and the Nationalist regulars holding the line. Actually, they had to hold a ford over El Rio Rojo (“The Red River”). If it fell, then the Republicans could cut their supply lines. We played the game out on a 6×4 foot table.

For once, I didn’t really have to supply many toys, apart from lending Gyles some extra militiamen and an armoured car. He had the militia covered, while Sean supplied all of the Nationalists. The approaches to the ford were covered by a few scattered buildings and a church, as well as some small woods, crop fields, orchards and rough ground. In the table above, the Anarchists were advancing from the left, while the rebel troops were defending the ford on the far right.

In the “Patrol Phase”, Gyles and Mally managed to get their “Jump Off Points” as far forward as the small wooded hill on their left, and the maize fields on their right. The third one was back by the house by the road, across from the church. The Nationalists deployed theirs behind the barricade near the ford, in the orchard on their left, and next to the fish pond in the villa in their centre.

The two sides deployed most of their troops right at the start. Gyles had a Bilbao armoured car with some Asaltos, who were there to beef up the Anarchists. they also had an old FT-17 tank, on loan from the government’s regular army. The Nationalists didn’t have all those support points to spend, so they opted for a Forward Observer instead, with his mortar battery. It proved an inspired choice.

The Anarchist militia began their cautious advance, but the militiamen in the maize field soon found themselves under heavy fire from the orchard. So heavy in fact, that they refused to leave what little cover it offered. As a result they suffered badly, and spent most of the game pinned down there, unable to move anywhere. So, it was up to their comrades over on the Anarchist left and centre.

This began with an advance from the small wooded hill towards the hacienda at the roadside, a little way before the ford. They got there without too much trouble, as the Nationalists hadn’t deployed troops to cover that bit of their defences. So, Gyles’ troops began to fire at the defenders behind their barricades, and began causing casualties – more than they got back in return. Meanwhile, the Bilbao armoured car chugged forward along the road, and eventually reached the level of the hacienda.

Just as it approached the building, the Nationalist FOO brought down his mortar barrage right across the road. That pretty much stymied any advance, particularly as the Bilbao was right in the middle of it. Meanwhile the defenders deployed their last section in the villa with the wall around it, and moved up to the front wall of the garden, so they could fire at any attackers making it up the road.

Over on the Anarchist right, the fire from the orchard finally proved too much, and the Anarchists in the maize field broke and ran. They’d never really posed much of a threat all game, but now, with the FT-17 coming up behind them, they might just have managed something useful. Instead, that flank of the defences was left fairly secure for a bit, especially as Mally’s tank then broke down.

So, it was all down to the people on the road. The Bilbao edged forward, despite the mortar shells falling around it, and amazingly it emerged unscathed. As it reached the front edge of the Nationalist barricade its machine gun sprayed the defenders, and a team of Asaltos jumped out of the door in the side. It looked like Gyles was throwing all he had into forcing his way through the barricade.

The Asaltos’ timing had been good – the defenders were already suffering a little from the fire of the militiamen in the hacienda. Other attackers were also firing on the villa from the road, around the corner of the mortar barrage. The Asaltos stroemed the barricades, and seconds later they went in with the bayonet and rifle butt, as the two sides jabbed and lunged at each other across the pile of mattresses, boxes and tyres.  Although the defenders outnumbered the Asaltos, the ferocity of the assualt drove them back.

Still, it wasn’t quite enough. Fire from the machine gun in the road by the church had temporarily pinned the defenders in the villa, so they couldn’t do anything to stop the  attack. However, Sean had also brought up his other section from the orchard, over on his left flank, and they now massed behind the corner of the villa wall, ready to charge the Asaltos if they pressed on to the ford. So, in the end, the Asaltos were either gunned down or forced to pull back to the hacienda. That’s where we ended the game, with the ford still firmly in the defender’s hands. So, it was a Nationalist victory, but full marks to Gyles for his dashing but doomed surprise attack!