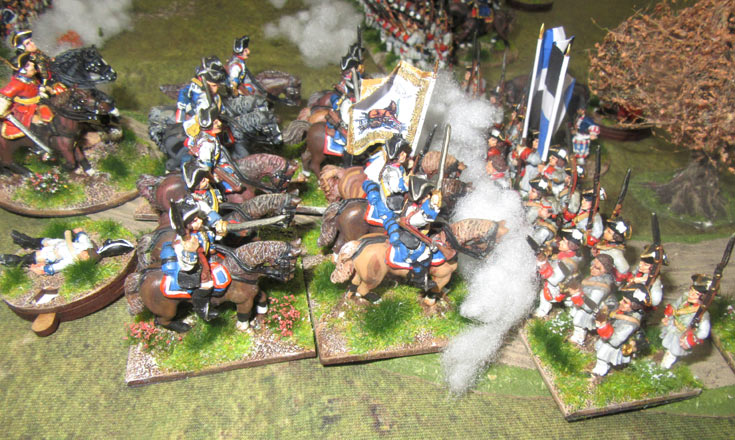 This was something of a blast from the past. For starters, the scenario came from a wargaming classic – Charles Grant (Senior)’s The War Game, published in 1971. It was just a small game between Sean and I, just a reinforced brigade a side, and I chose the scenario because it was well-balanced. In fact it was the “learning the rules” game in The War Game. The main difference was that the Grant’s used (and still use) big 48 man units. I simply used two of my 24 man units to replace each of these larger ones. 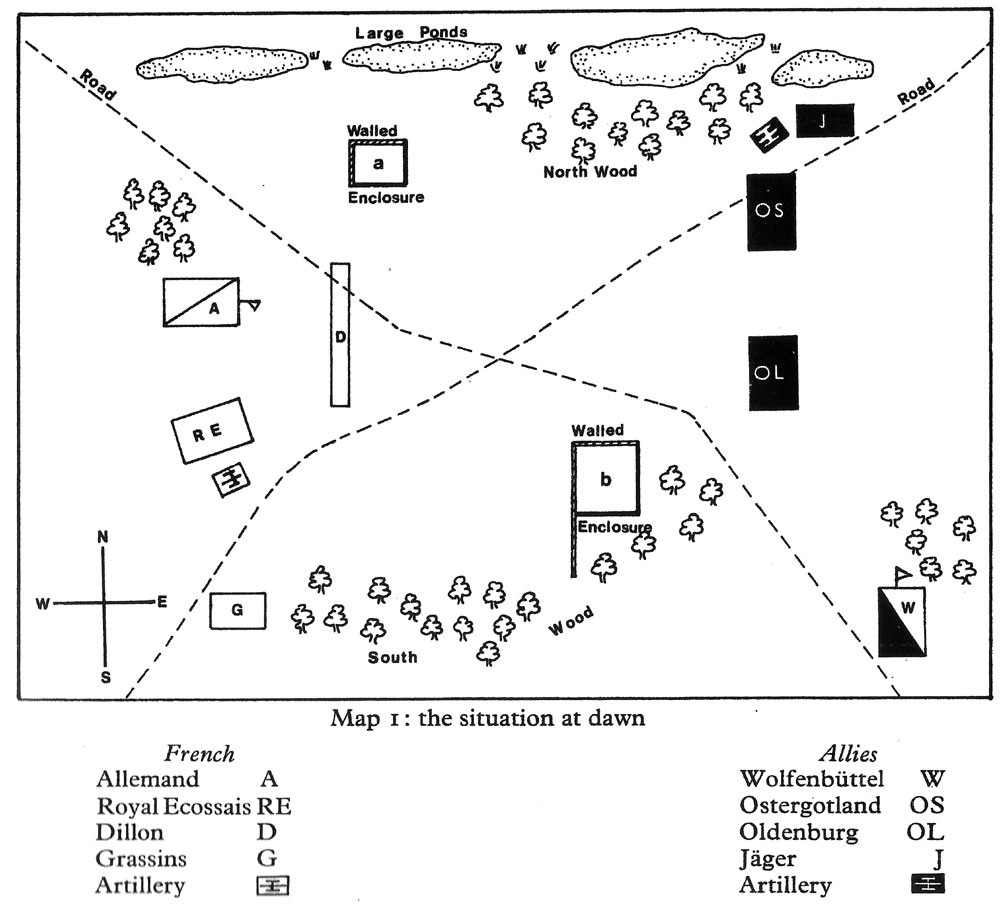 Well, there were actually two other changes. First, Charles Sr. used a 7×5 foot table, so I scaled it down to fit the 6×4 foot ones we use at the wargame club. The other was that he used his own rules, while I opted for Keith Flint’s Post of Honour. Essentially, this was a chance for Sean and I to try them out properly. Oh, and in the Grant’s orbat above, the Allemand were swapped for the Lyonnais, the Royal Ecossais the Tournaisis (two battalions in each regiment), and the French cavalry by a 12 man unit of the La Reine Dragoons and another12 men of the Talleyrand regiment. Oh, and the Grassins were now the Voluntaires Etrangers de Clermont-Prince –   a unit of 12 French light infantry. Each gun battery was made up of two guns and 8 gunners, plus limbers.

For the Western Allies, the British 25th (Edinburgh) Foot and the Hessian von Toll regiment stood in for Ostergotland, von Wangenheim and von Scheither’s Hanovarian regiments for Oldenburg, and instead of the Wolfenbuttel horse, the Allied cavalry was now the Breitenbach Dragoons and the von Hodenberg cavalry regiment. All horse units were 12 figures strong, making up for the single 24 figure units used by the Grants. The Allies had light infantry too – a unit of 12 Hanovarian Freytag Jaegers. 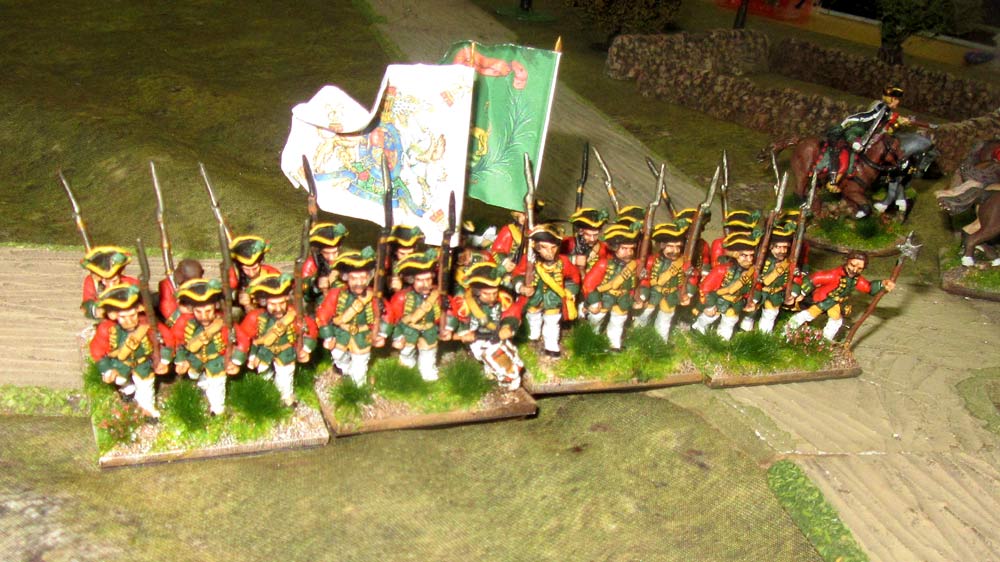 We deployed as the Grants did, with the Lyonnais regiment in line and all the other foot and cavalry in march column. The French guns were deployed, while the Allied ones were still limbered up. In this one, Sean opted for the French, led by Lord Clare, while I took the Allies, commanded by General Baron von und zu Trinsksblut und Eisenessen – that was Grant Snr’s  great choice of name, not mine unfortunately! 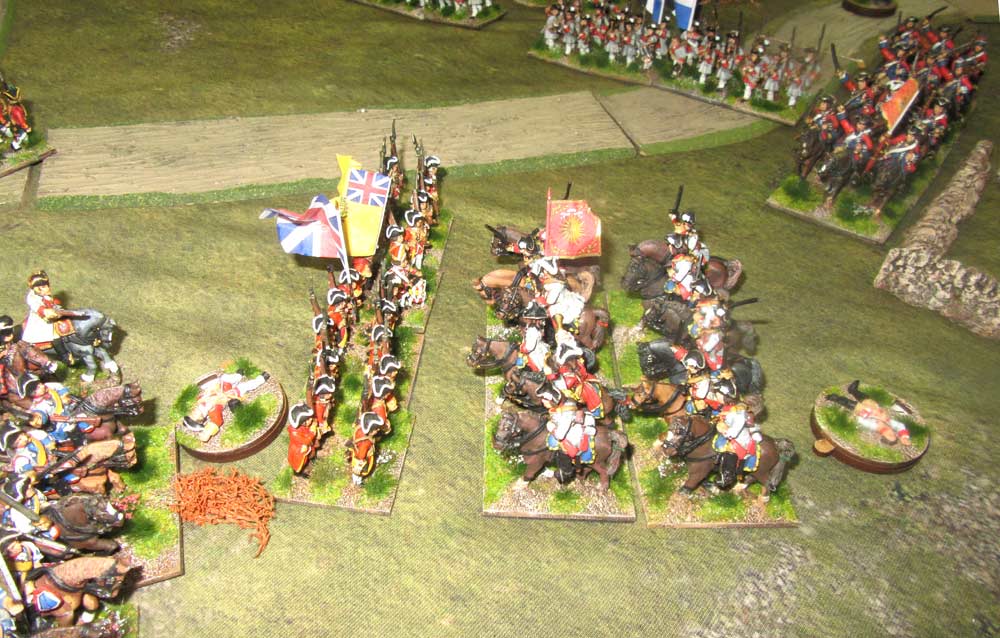 The game began with both sides cautiously advancing, and deploying their foot into line. It was quite a cramped table, so Sean and I didn’t  really quite know what to do with our cavalry. Sean is usually quite cautious, so I was surprised when he charged the Talleyrand horse into the front of the 25th Foot. They got stopped short by close-range volleys, didn’t charge home and were forced to fall back. Then they got shredded by canister from the Hanovarian guns, and were broken, then lifted from the table. 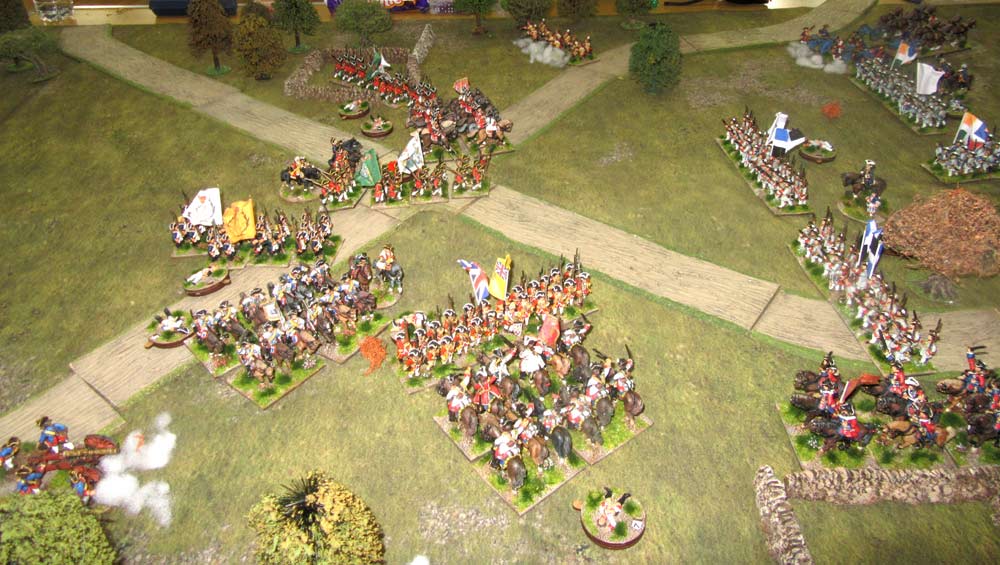 I began to feel confident – enough to advance my leading two battalions of infantry into musket range of the French. You don’t fire as effectively if you move, so this coming exchange of fire was a gamble. In fact it paid off – sort of – the two Allied and two French infantry units all inflicted hits on their opponents. So far so good. Over on the Allied left things weren’t going so smoothly. 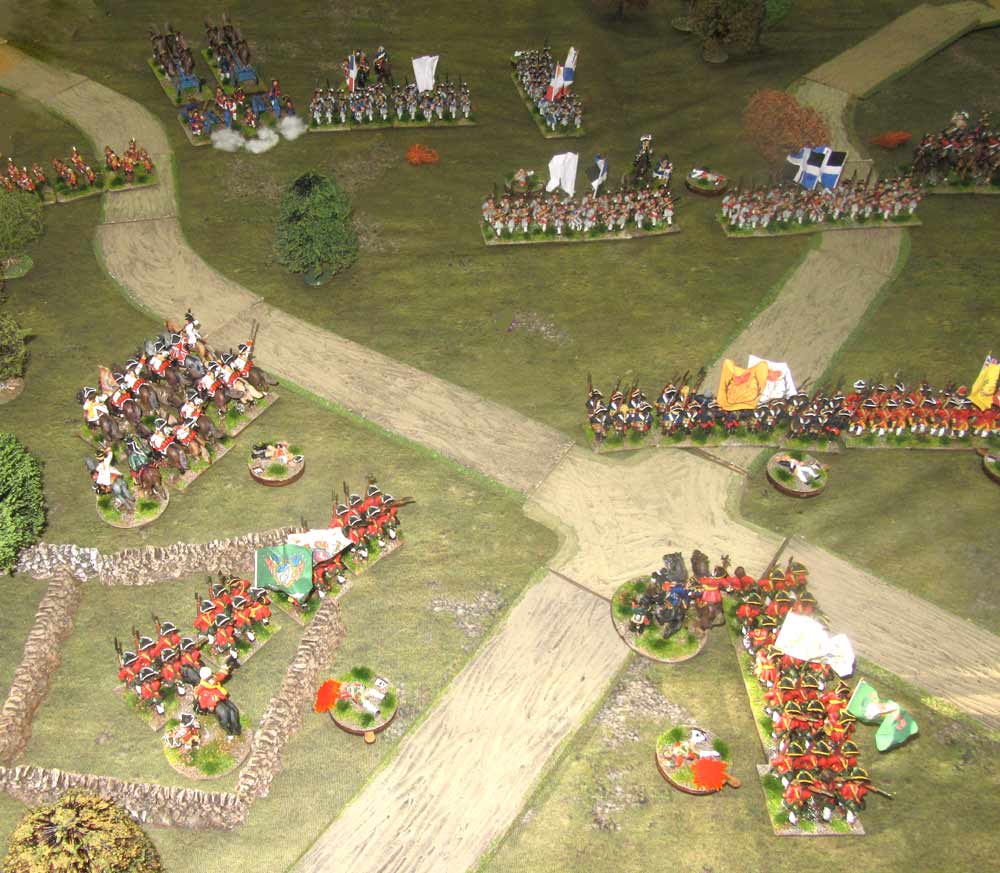 Von Scheither’s  Hanovarian regiment was getting battered by the French guns, and was “Weakened” when it reached four hits. I moved my dragoons up to cover them as they pulled back to rally themselves, helped by the General Baron. That’s them in the bottom right above. On their left, von Wangenheim’s foot were getting the worst of their firefight with the Clermont-Prince light infantry, despite having a walled enclosure to hide behind. The Breitenbach dragoons drove the French skirmishers back, but they had to pull back themselves, or risk getting eviscerated by the French guns, which were now in canister range. 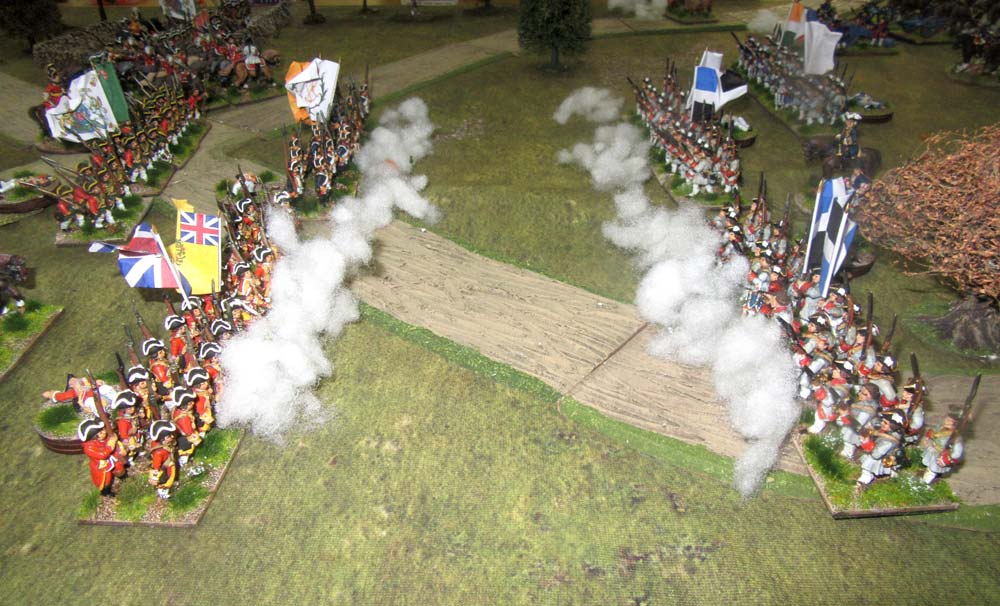 Then, in the centre, it all went wrong. In the next exchange of volleys Sean rolled superbly, and the British 25th Foot reached “7 hits” and so broke and ran. That left a big gap in my line, which got even larger the next turn when the Hessian von Toll regiment broke too. I’d lost the firefight, and now my infantry was down to two “weakened” Hanovarian battalions. Sean closed in for the kill. 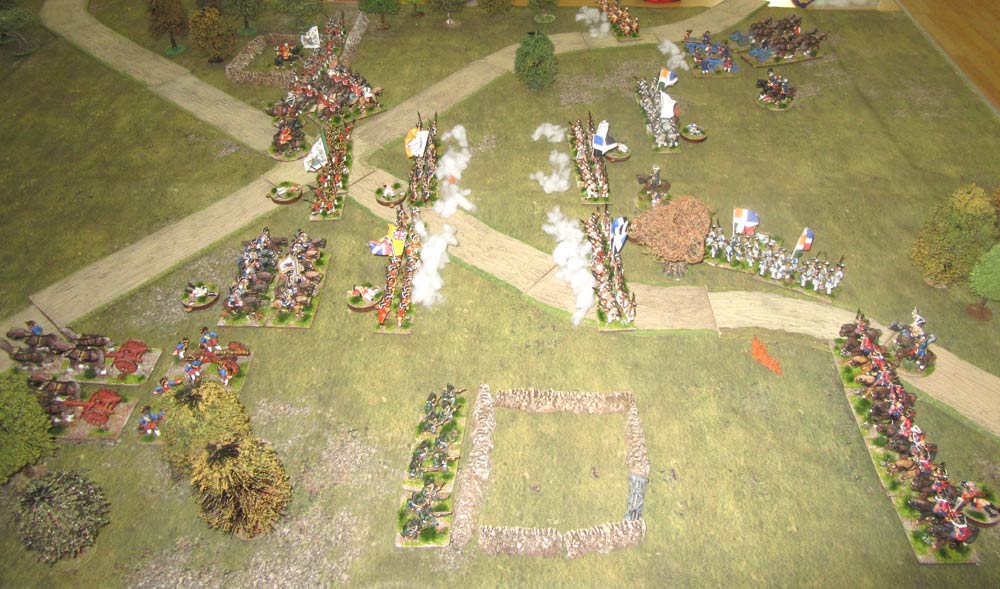 All this time he’d been moving his red-coated dragoons around his left flank, and as they advanced they drove back the Hanovarian jaegers from the northern walled enclosure. They evaded into the woods, as the French cavalry lined up for a charge against the Hanovarian guns. It almost worked. In the end the fire from the guns and the jaegers was enough to force the La Reine dragoons to fall back. Then a second blast from each Allied unit and the French dragoons broke and ran. Honour was restored! 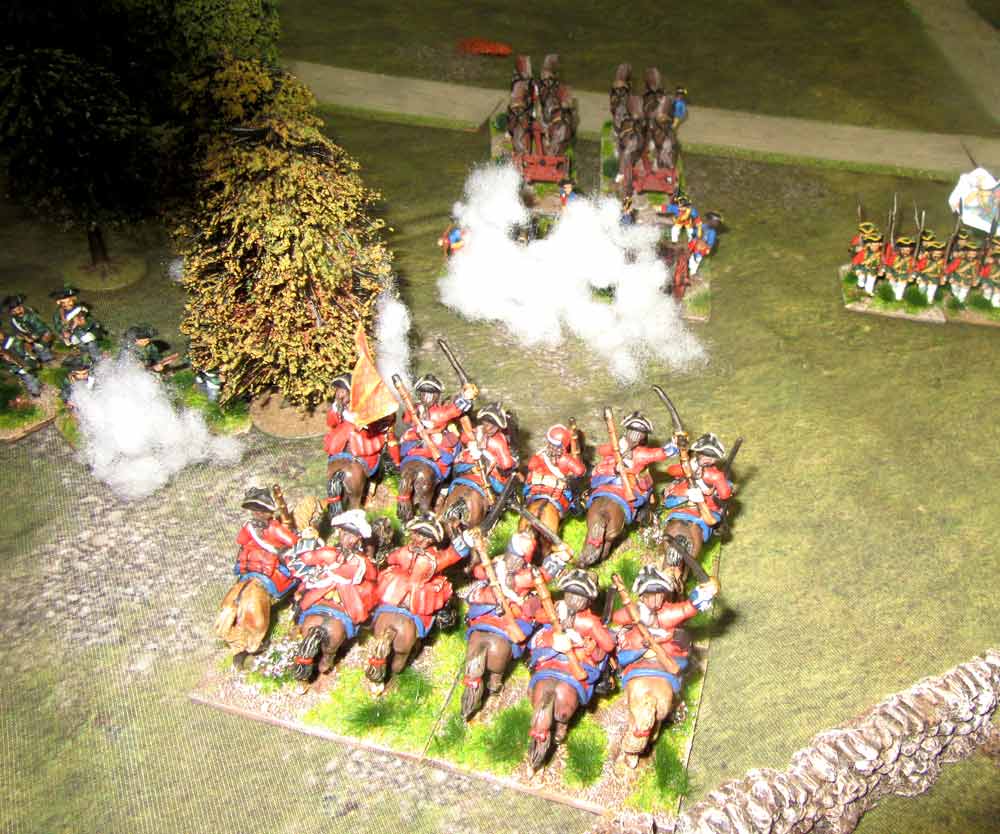 We were now a little battered, although we’d rallied the worst of ourt units, and rebuilt our front line – four French infantry units facing two Allied ones, backed up by cavalry though – something the French no longer had. So, when a battalion of the Lyonnais regiment was weakened, I got the von Hodenberg cavalry  charge in. The French got in some opportunity fire as I closed, but it wasn’t enough, and the French battalion was swept from the field. That put is to a more respectable 3:2 in units we’d lost. 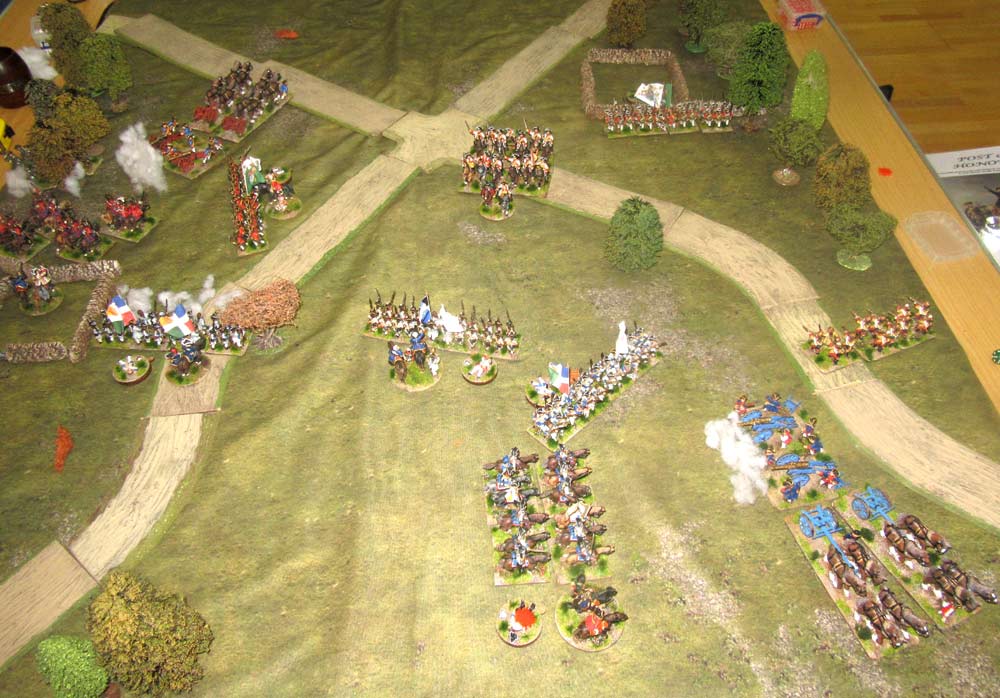 The best bit was the cavalry got to make a pursuit charge, which took them past what remained of the French line. So, as Lord Clare was accompanying them I turned them to the left, gave them a bit of a rally, and then charged the French guns. I thought I was onto a winner, but some damned gunner saw the threat, turned them in the nick of time, and got off a shot. it was enough to make me “Weakened”, thereby thwarting the charge home. That turned out to be the last shot of the game. We ended it there, with the game effectively a draw. The very simple, straightforward rules worked a treat, and we’ll certainly try them again soon. Thanks as well to the legendary Grant family, for Charles Snr’s. nice little scenario.