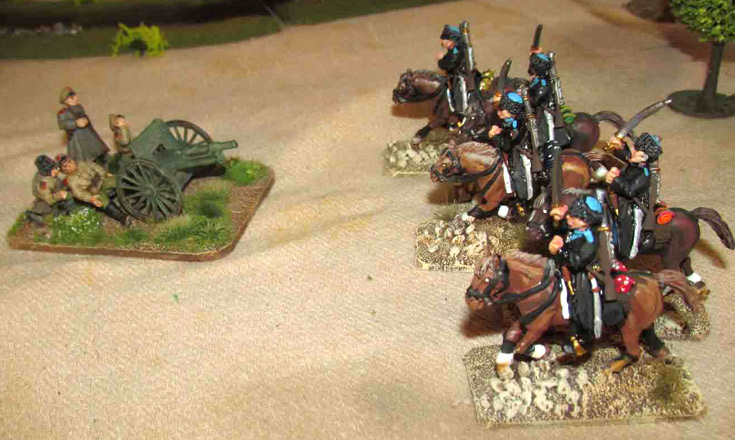 The Back of Beyond, Setting the East Ablaze, 1920

This week we played out a game from the scenario book for Setting the East Ablaze!, which follows on from one we played in January. In that, the Bokharans repulsed an attack by the Bolsheviks, and lived to fight another day. Well, this was that other day, and this time the Red Army had turned up in force! The Emir of Bokhara’s army was certainly colourful, with guard units in red jackets, guard Cossack detachments, rightly-dressed Basmachi tribesmen, and green-coated gunners serving ancient bronze guns towed by elephants. The Red Army had machine guns, aircraft, modern artillery and lots of boots on the ground. All the colour in the world can’t really match that!

In this game, the Bokharans deployed in front of their city, behind the bend in a Amu Darja Riiver. Their defensive line centred on two redoubts, but because the Bolsheviks had a pre-game barrage, we decided to stick our guns just outside them. As a result we survived the artillery pounding, but on the Bokharan left we lost the race to re-occupy the empty earthworks. With hindsight Sean and I wpould have done much better by taking the pain, and so being in place when the enemy assault began. This Bolshevik attack was two-pronged.

On their left, Alan’s advance was cautious, as he didn’t want to take on the guns in the earthworks without softening them up first. A unit of cavalry crossed the river and advanced in a curve, keeping out of the line of fire of the battery, while field guns and machine guns opened up on the Bokharan position – without much effect.

Over on the Bolkshevik right Gyles’ attack was much more spirited. Artillery, machine guns and cavalry deployed to the east of the river, facing the earthworks and a small defended village, while the main body of infantry crept forward across the river, taking cover behind a small hill and a wood. One unit though – Red Fleet sailors – charged forward, and won the race to the redoubt. they were outside it as the Bokharan guards clambered over the other wall. As the sailors were better trained they could move AND shoot – a big advantage, as the Bokharans were caught in the open. They pulled back, and the sailors charged forward, into the redoubt. What followed was a hard-fought melee, but eventually the guards were driven off, and what remained of the sailors were firmly in control of the earthwork redoubt. The Bokharans on that flank pulled back and regrouped in the village.

On the opposite side of the river things weren’t going so well. Another unit of Red cavalry clattered across a small bridge and charged the Bokharan guard Cossack regiment. This time the Red Army came off worst, and the unit was routed, thanks to some poor morale saves. The black-coated Cossacks crossed the river, skirted another small copse and overran a Bolshevik machine gun – actually a dismounted tschanka team. The Cossacks then went on to ride down the Bolshevik field gun beyond it. That though, was the only bright spot in the day for the Bokharan army. Actually, that isn’t strictly true, The Red Air Force tried a strafing run on the Bokharan Turkic guards, but the plane was driven from the table by some accurate fore from a Bokharan anti-aircraft pom-pom. The two pom-poms could do nothing else in the game, but at least they did their job!

On the far (left) side of the table the Bolshevik cavalry charged the Basmachi tribal cavalry who were supporting the defenders of the main redoubt. In these games irregular cavalry look great, but prove pretty useless in combat. That was certainly the case here, as the Basmachis were chopped to pieces by the more experienced and regular Bolshevik horsemen. They then tried to storm the rear of the redoubt, but were held off and eventually dispersed by fire from a Bokharan machine gun. The defenders though, forgot that the Bolshevik cavalry were supported by another tschanka, which raced up and silenced the Bokharan gun, The way was now clear for that Red infantry assault. Behind their cavalry two units of Red Guards had been advancing towards the redoubt, while the gunners were distracted by the fire from enemy guns, machine guns and an armoured car. While the armoured car was routed, the defenders were unable to stop the infantry from circling around the redoubt, and storming it from the flank and rear.

The defending Bokharan militiamen did their best, but the result was inevitable. The great redoubt fell, and with it the final last gasp hope for the Emir of Bokhara. HE watched the fight from a hill behind the Bokharan centre, and saw the fall of both redoubts, and the retreat of his white-coated infantry in the centre. Now, with nothing left save a field gun, the remains of his Cossack guardsmen, and a few battered infantry units, he conceded defeat. So, true to history, Bokhara fell to the Bolshevik hordes, and the poor Emir beat a hasty retreat towards the Afghan border, accompanied by his military advisors, relatives and catamites. this though was a wargame, and not real life. I have a feeling we haven’t heard the last of the Emir of Bokhara, and his colourful but rather useless little army!