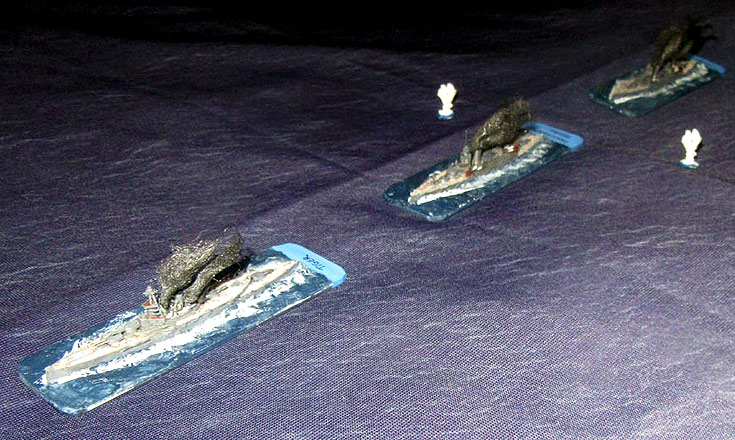 It’s been a while. Last week I couldn’t reach the club in Kirkwall ’cause the Churchill Barriers were closed – the causeways I have to drive over to get into town. Then, thanks to ferry cancellations and a gale, I couldn’t get to my big weekend refight of Wagram with the League of Gentlemen Wargamers. So – apologies for the game between games! This time, Nick, Sean 1 and I opted for a small World War 1 naval game. As we hadn’t used the rules in ages, we kept it small – just battlecruisers and fast battleships. 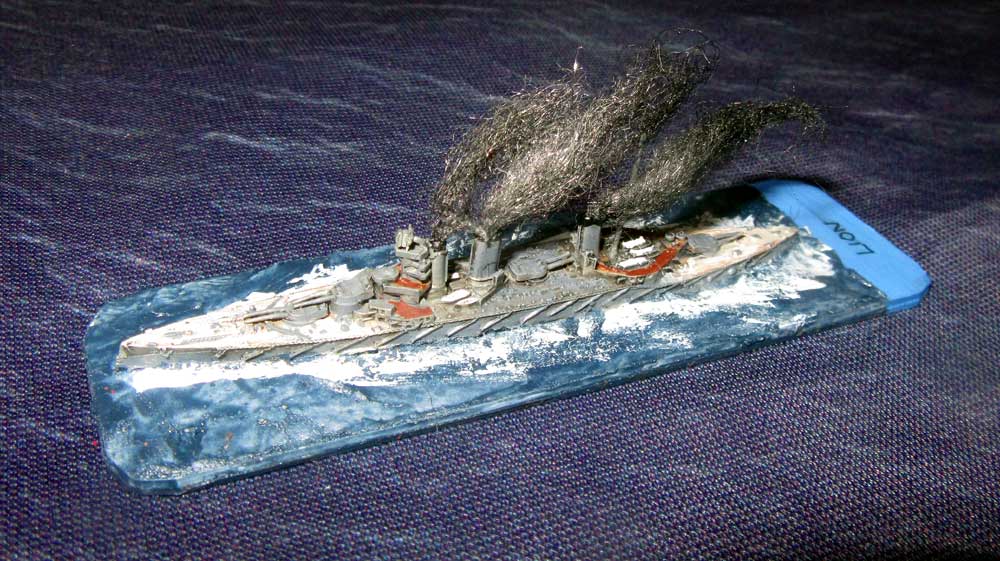 In this one, Sean played the Germans, returning from a scouting mission in the North Sea. As he neared the safety of Horn’s Reef and the start of the German defensive minefields,  he was jumped by two small British forces. For this one, Sean, plying the part of Vizeadmiral Hipper, had the battlecruisers Lützow (his flagship), Derfflinger, Seydlitz and Moltke, guided by a zeppelin.  Nick, acting the part of Vice Admiral Beatty, commanded the Lion (flagship), Tiger and Princess Royal. As for me, I took on the role of Rear Admiral Evan-Thomas, with the fast battleships Barham (flagship) and Malaya. 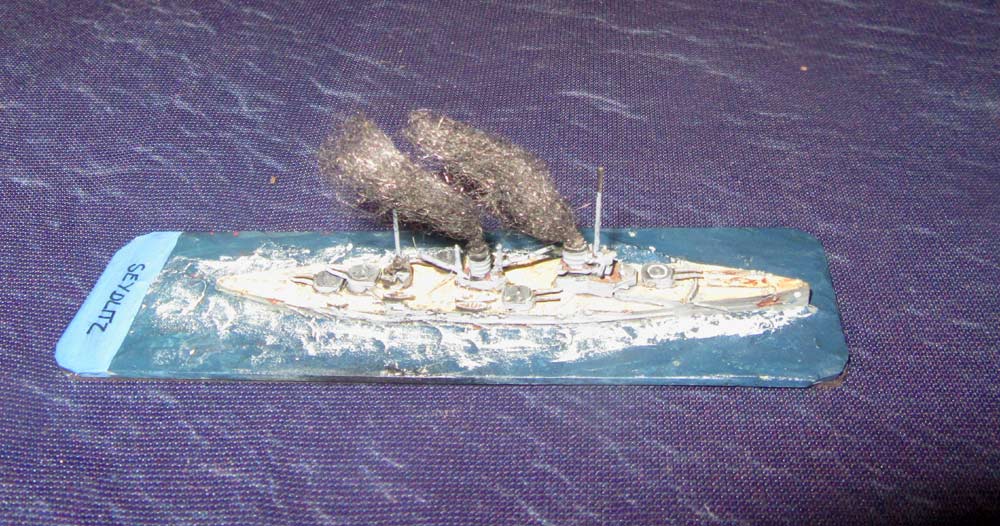 This was a pursuit game, with the Germans trying to cross 12 feet of table to reach safety at the far table edge (okay, we moved everyone back 6 feet when Sean’s leading ship reached it the first time). The game was played on an 8×6 foot table. It began with the Germans in line ahead formation in the middle of the table near its southern  edge, with the British “big cats” arriving from the north-west and the fast battleships from the west. The sea was calm, visibility 12,000 yards and the wind slight – a perfect day for a sea chase, although the forecast foretold fog in the offing. 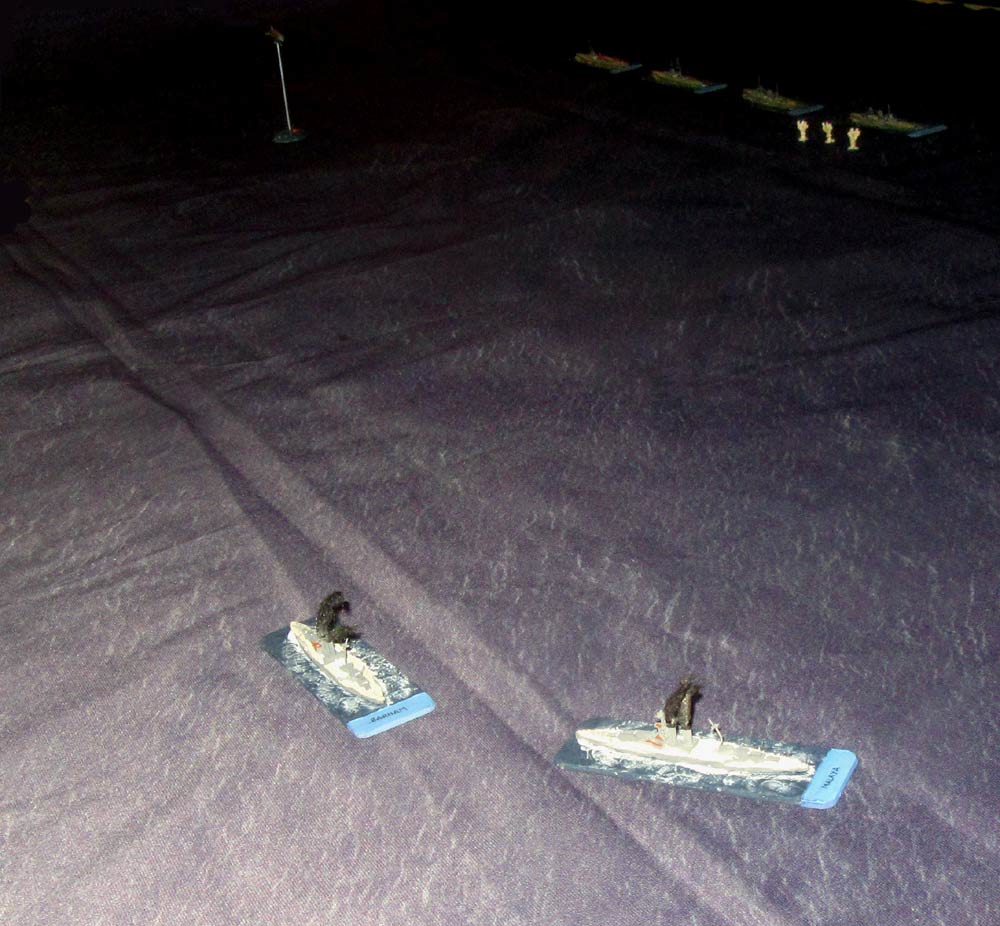 The action began as soon as the battlecruisers spotted each other. Nick closed the range slowly, to keep all his gun arcs clear, but it still took a couple of turns for both sides to score any hits. Once the range dropped to 10,000 yards (100cm), it seemed to be open season for battlecruisers… 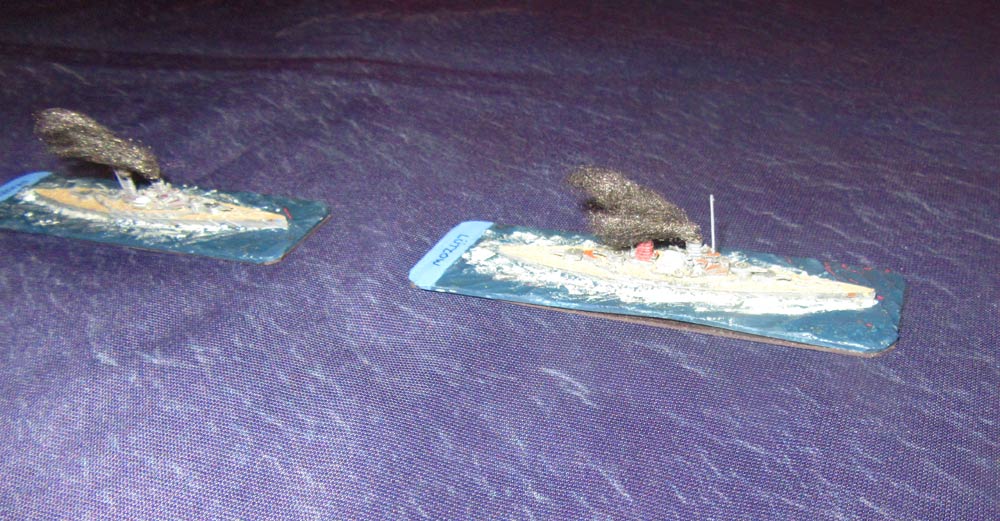 Surprisingly it was the British who scored the first hits, with shells striking Lützow and Seydlitz. My own gunnery was lousy, so it was up to Nick to stop the Germans. Then, with the range at 9,000 yards, it all started happening. Sean hit Tiger, causing flooding and wrecking her Director Control Tower. that forces her to use local control for her guns, but frankly it seemed to make no difference, as her gunnery teams were on form. Derfflinger had two turrets knocked out in a single turn, while Seydlitz was pounded hard, losing hull boxes, and her two forward turrets – one through an “Explosion” critical hit. Disaster was averted though, and “B” turret magazine was flooded – presumably with her handling crew still inside. 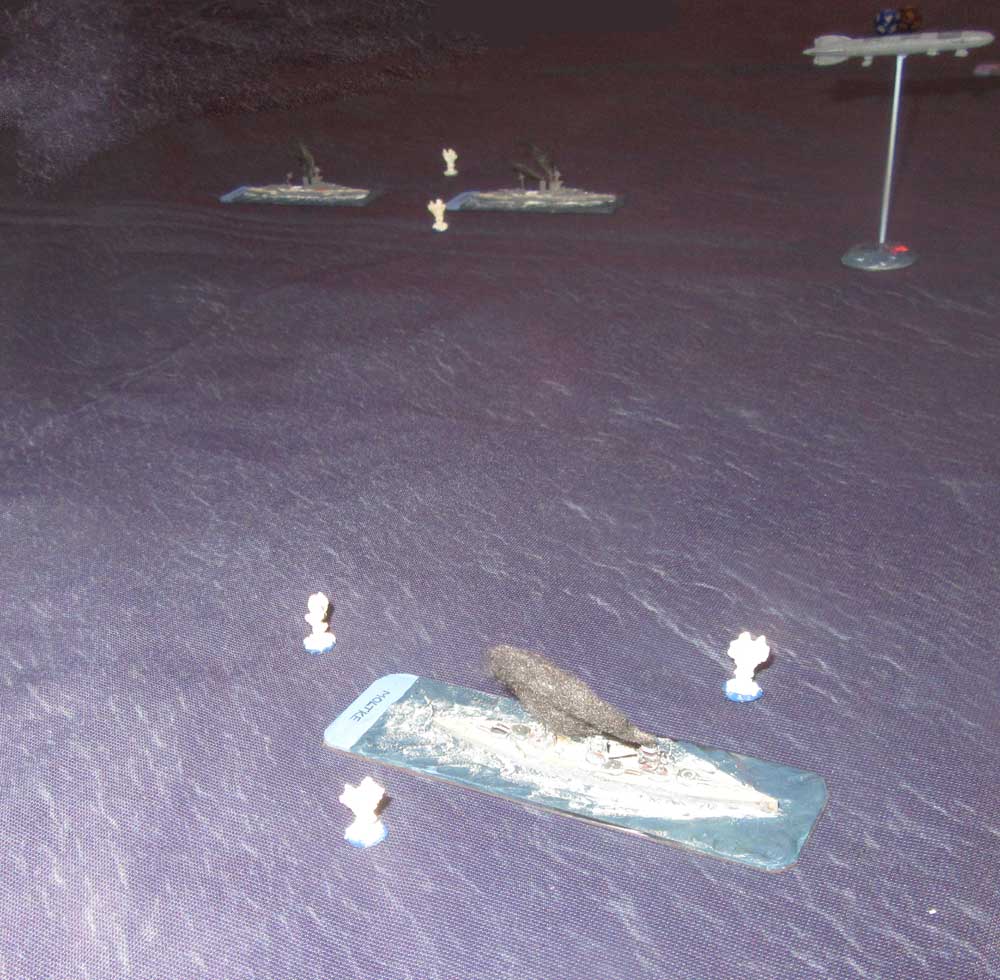 My favourinte was when Lützow took rudder damage, and peeled off in a big loop to starboard. So, Captain Hartog in Derfflinger took the lead. Moltke was getting plastered too, mainly as my fast battleships finally started scoring hits. She was at the end of the German line, and quickly lost three of her turrets – again with  Sean rolling well on the “Explosion” critical hit. The British were suffering too though – Tiger lost a forward turret, and flooding caused her speed to drop to 22 knots.

By this stage we’d moved everyone back six feet, and Sean was streaking for the finish line – apart from his flagship of course, which was now heading away from Horn’s Reef. Another turn and Seydlitz was almost dead in the water, riding low and with all her guns silenced. A turn later and it was all over, and she began to capsize. Strike one for the British. 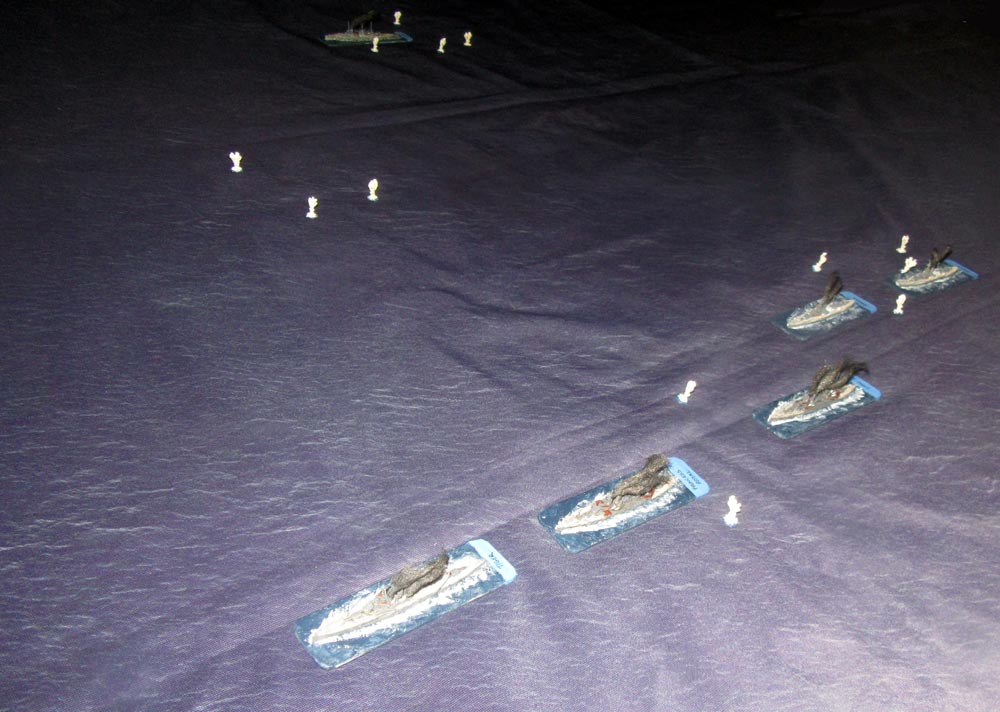 Tiger had lost two guns though, as had Malaya. The odds now though, were improving for the British, especially after Moltke lost her penultimate working turret too. Derfflinger had lost a turret, but she was still streaking ahead at 27 knots, and safely reached the table edge. So, that was one of the four German battlecruisers sunk, and another safely off the table. 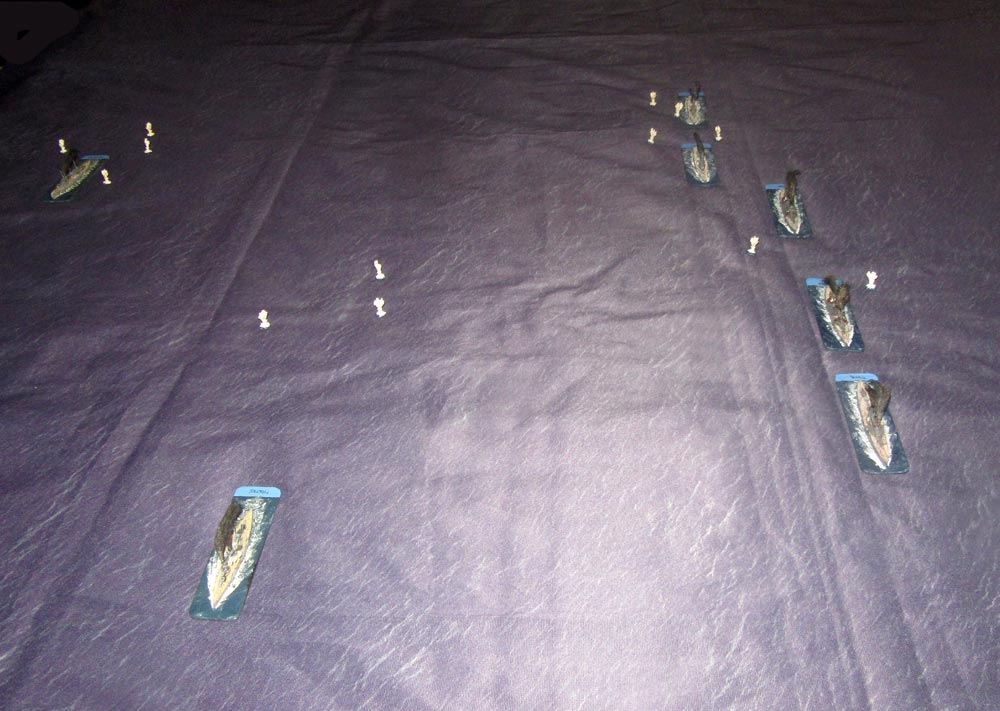 The action now concentrated on the Moltke. She was pounded hard by the three British battlecruisers, but while all her turrets were eventually knocked out, her hull remained fairly intact. So, she managed to limp off the table edge, making 22 knots. 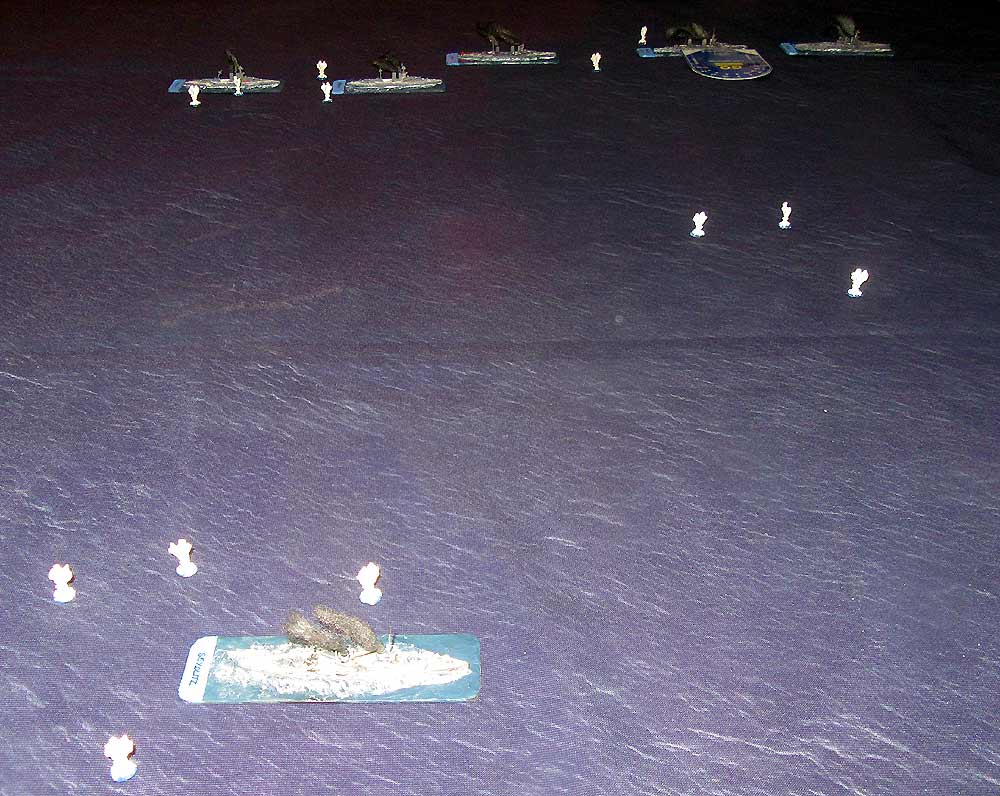 While this was going on my two fast battleships had been sparring with the Lützow, which was now well to the south-east of them. Then fortuitously for Hipper, the  fog appeared on the western side of the table, and the German flagship disappeared into the murk. That brought the game to an end – with Hipper losing one battlecruiser, while three more were all badly damaged. 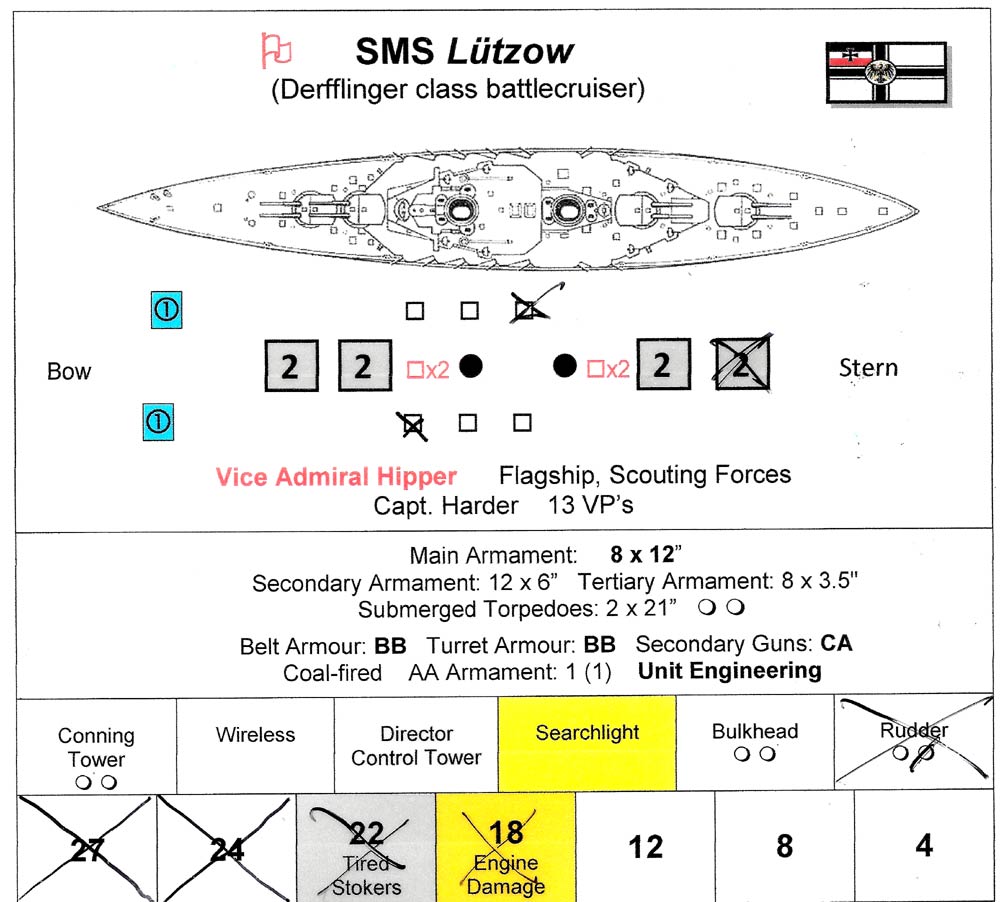 Lützow  would probably make it home thanks to the fog. The British suffered too, and two battlecruisers and a fast battleship would all need some extensive repairs before they rejoined the Grand Fleet. Still, thanks to the sinking of the Seydlitz it was a clear British win. Far more importantly, it was a fun little game, and quite hard-fought too. Nick, who hadn’t played this since General Quarters fist came out, was surprised just how simple and intuitive the game system is. I can see us playing this again soon.