This is going to be the last game played at my house for a while. The wargame club is re-opening next week, so weekly games are back on the agenda! Hurrah! By general consent, this week’s game was a Seven Years War one, a small clash set in the west between the French and the Western Allies. The scenario came from the Honours of War rule book – we just added an extra battalion per side. 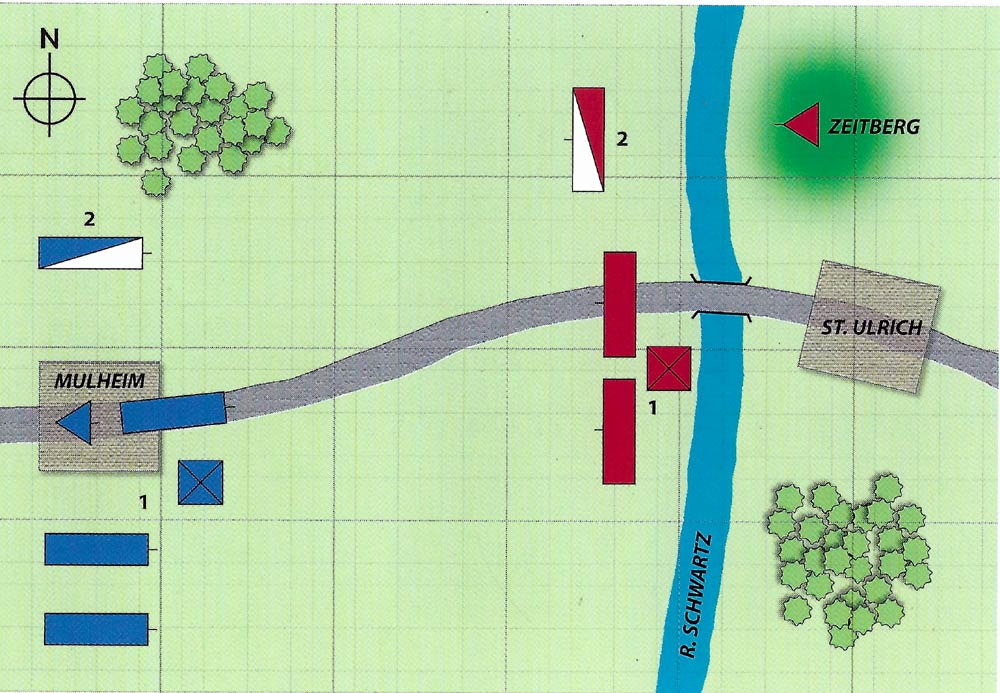 This game saw the French defending a bridge over the River Schwartz, with French two line battalions and a Swiss one, plus a supporting regiment of cavalry on their flank. Behind them, on the east bank of the river was a gun battery, sited on the low Zeitberg hill, beside the hamlet of St. Ulrich. 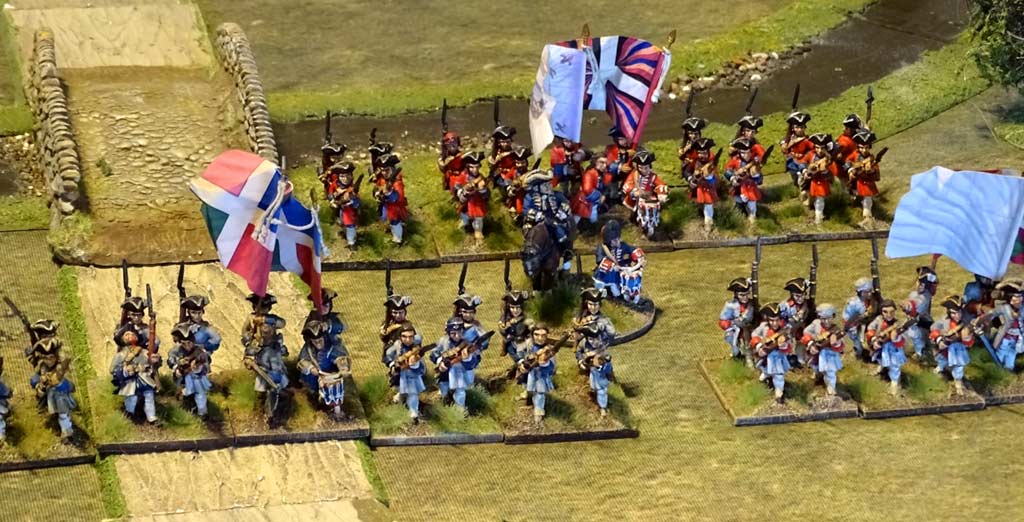 The Allies appeared from the other short table edge, around the nearby hamlet of Mulheim. Mally and Lindsay commanded the attacking Allies, while Gyles and I took charge of the French.  For this one, I supplied the figures. I’d also reduced the size of my units to fit those in the rules. The game was played on a 6×4 foot table,laid out to resemble the map. 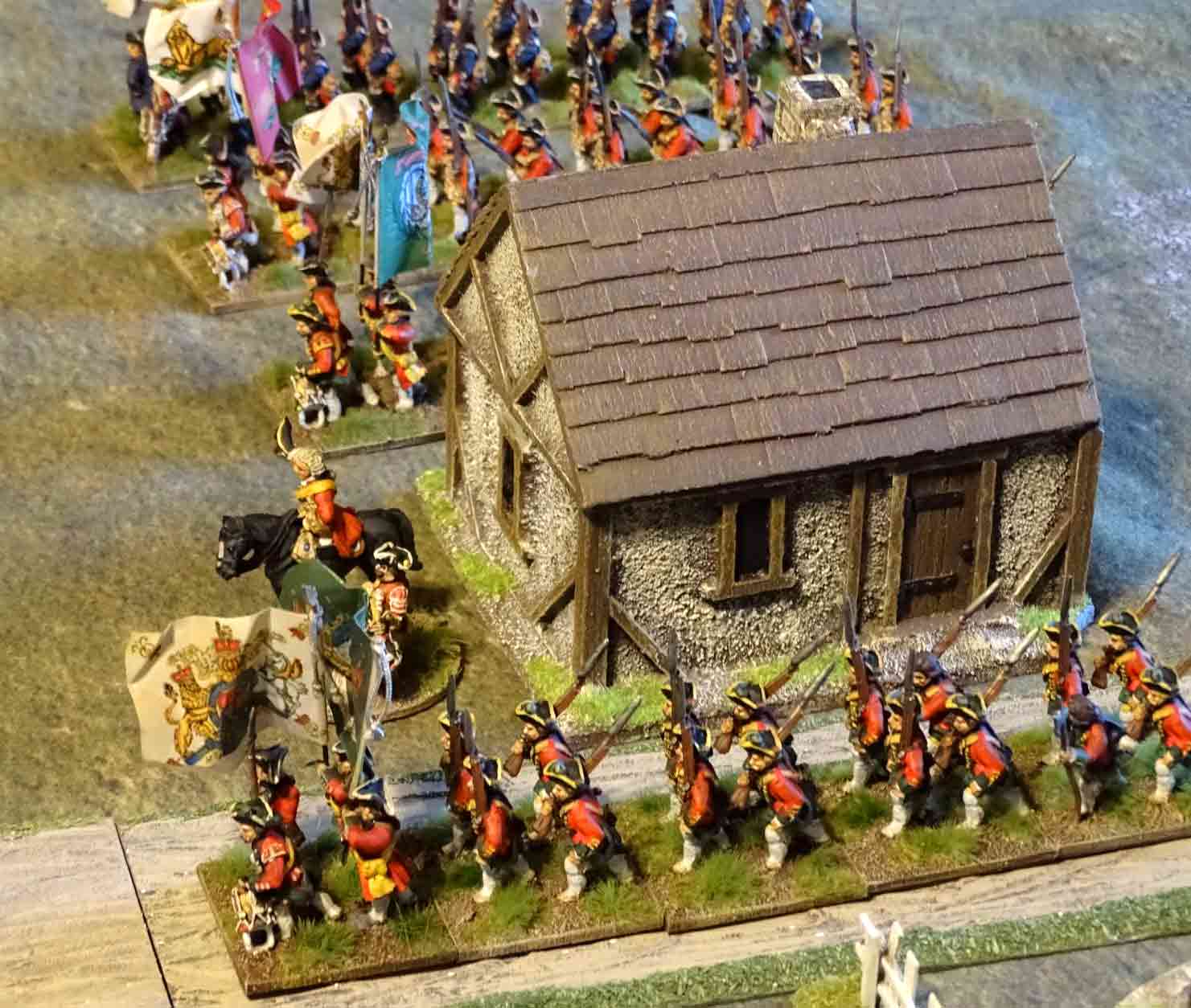 The game began with the Allies advancing from the deployments shown above. The only difference is that on their right there were three battalions rather than two – we slipped an extra Hessian battalion into the force, which was otherwise made up entirely of Hanovarians. On the right, Mally’s three battalions advanced steadily, while Lindsay put hers into line once iit cleared the village, to screen the deployment of her gun battery. 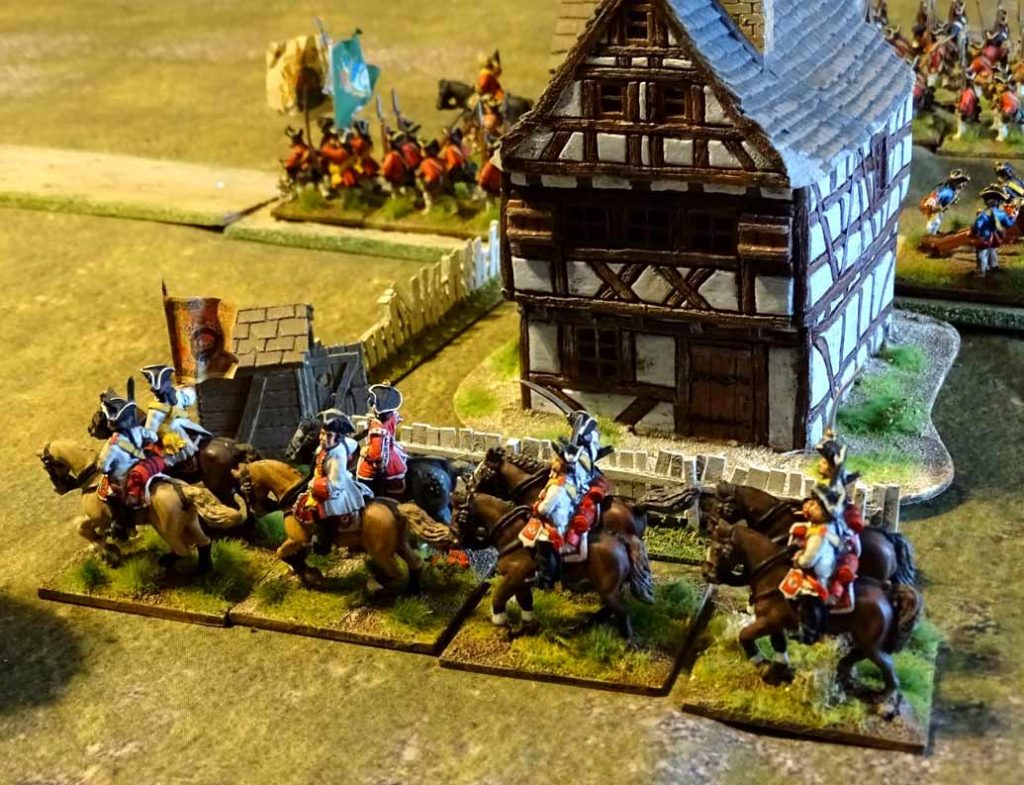 On the Allied far left, the von Hodenberg cavalry regiment had to pass through a gap between the village and a small wood. So, Lindsay kept it in march column. Gyles rolled “admirable” for movement, and so he sent his own cavalry of the Chabrilan regiment in a hell-for-leather charge. The French horse hit the head of the Hanovarian cavalry column, driving it back through the gap in disorder. 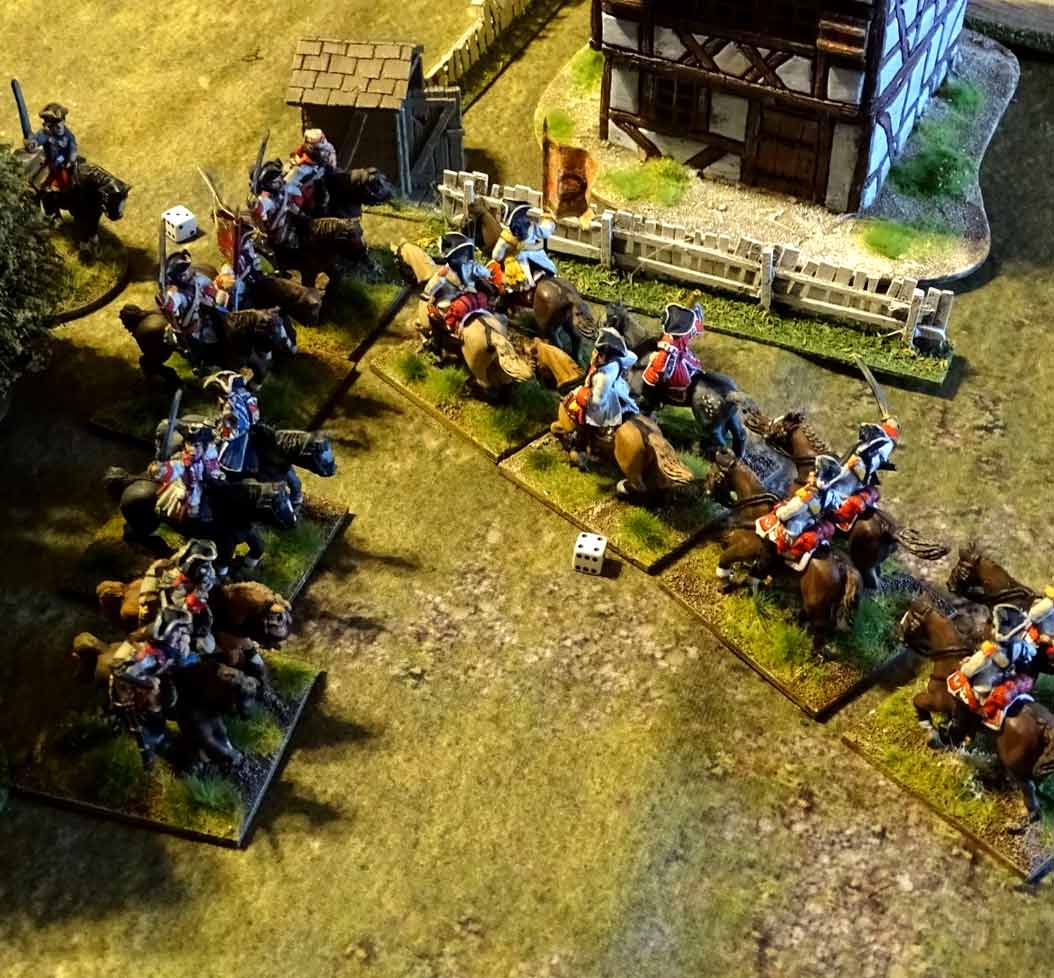 Then, Gyles pursued through the wood, just as the Hodenberg’s were trying to rally. This second French charge swept the Hanovarian cavalry from the field! Gyles though, decided not to tempt fate, given there was a Hanovarian gun battery nearby, so he stopped to the north-west of Mulheim to redress his ranks and recover his hits, with the help of his attached commander, the Compte de Brienne.

Over to the south, Mally had deployed his three infantry battalions into line, and joined by Lindsay’s one they formed up and advanced towards the waiting French. At this point of the game the only unit in action was the French gun battery on the Zeitberg, which pounded away at long range, targeting Lindsay’s one infantry battalion – the Hanovarian Jung Zastrow regiment. 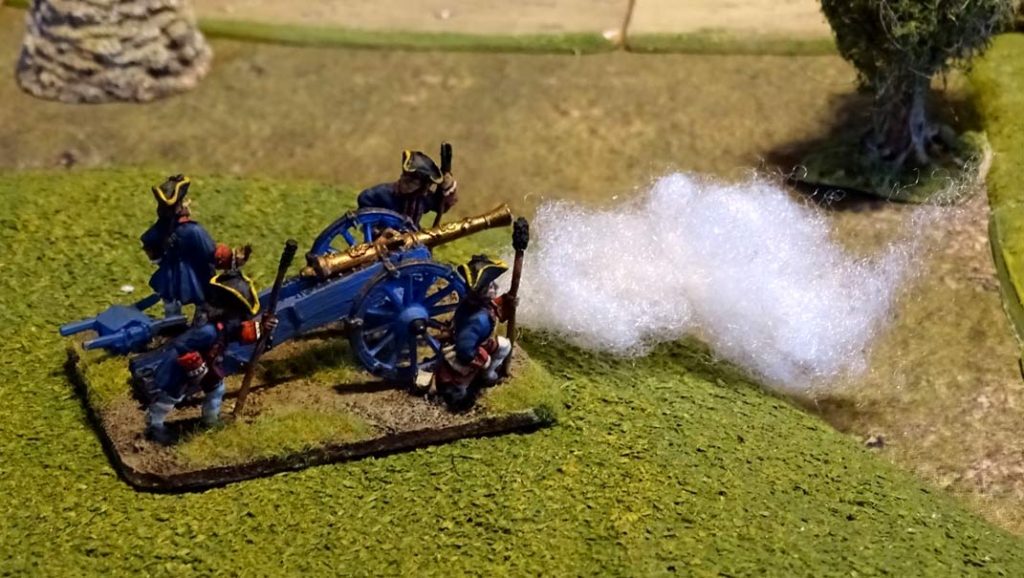 The two infantry lines had now got within long musket range of each other, and a firefight began, with the two sides firing at their counterparts in front of them. the Allies though, had a  fresh battalion in reserve. Both sides suffered a little, but nobody really inflicted any serious damage. the exception was the Jung Zastrow regiment, which was now retiring after taking a total of 4 hits from the French artillery battery, as well as the nearest French line unit – the sole battalion of the blue-cuffed Conde regiment. 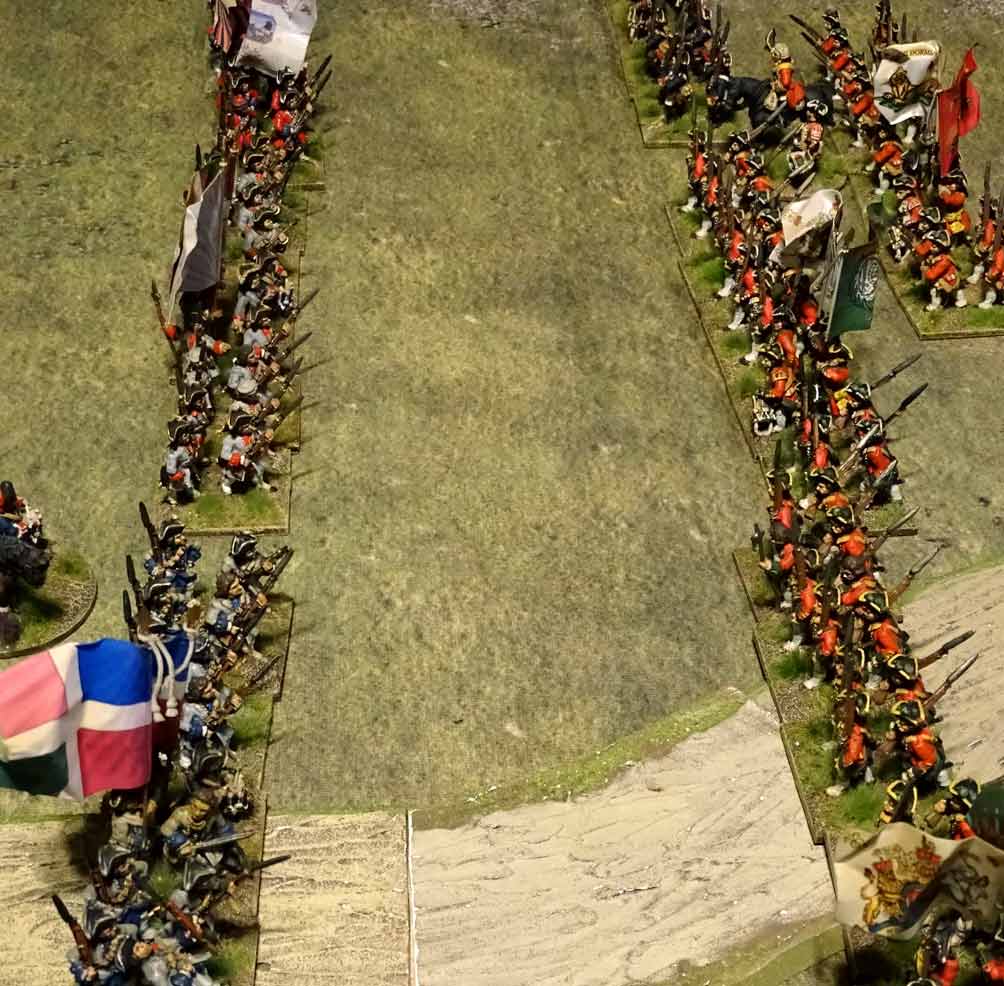 Then, everything changed. Having recovered themselves, Gyles’ French cavalry trotted back through the wood, where the Hanovarian artillery fired at them and missed. At the time the gun was on the road to the east of Mulheim. As the infantry lines blazed away at each other to the east, the French Chabrilan regiment swung out of the wood, formed a neat line, and charged. The gun fired again as the attackers swept in, but the shot went wide. With that the gunners fled to the  village, and the abandoned battery was overrun.

Meanwhile, in the infantry fight, both sides were hammering away at each other, but they only scored fairly minor hits. By now though, two of the battalions on each side had a couple of hits, and so were looking a little vulnerable. In theory, Gyles’ cavalry should have been getting ready to sweep into the rear of the nearest enemy battalion. However, things then started to unravel very quickly. 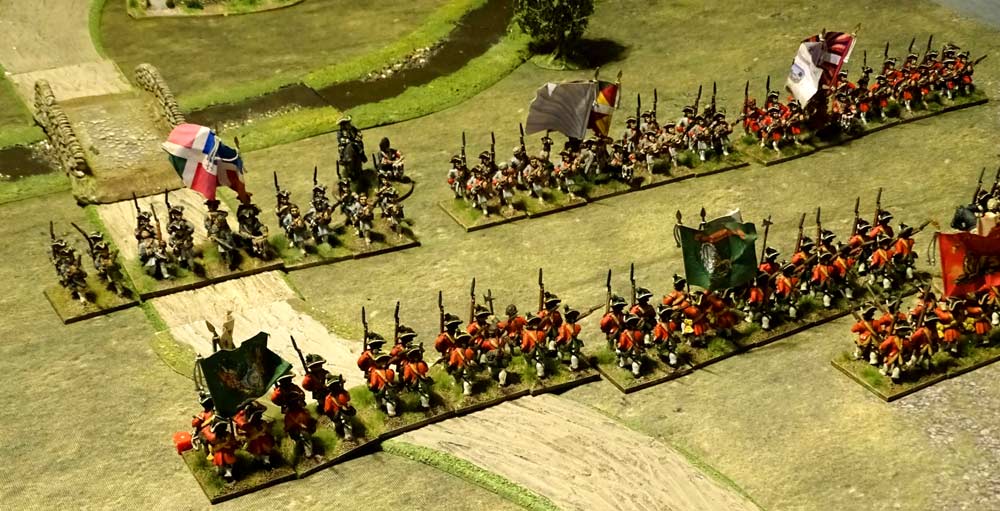 In the next round of firing the Allies didn’t score any hits. however, on the French side the battalion from the Swiss La Planta regiment scored three hits on the Hessian Leibregiment, which brought its total up to five hits. That meant a lift-off. While the Tournasis regiment missed, the Conde regiment on its right scored another two hits on the battered Jung Zastrow’s. that and another artillery hit tipped them over the edge, and with 5 hits they broke and ran. That brought the Allies’ Army Morale to break point, which meant they’d lost the game. I was the only one who’d played Honours of War before, and both Lindsay and Gyles said they preferred Black Powder. Mally, as ever, kept his own counsel. Who knows – next time I might foist my own veteran Die Kriegskunst rules on them! 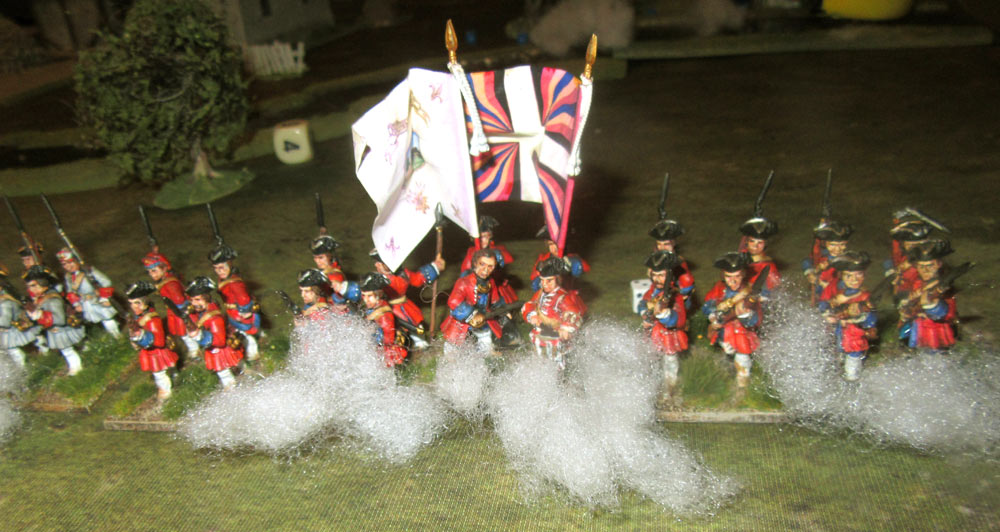