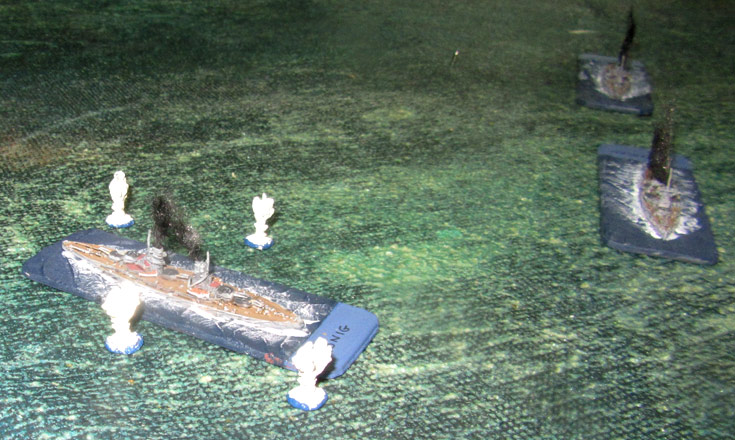 We hadn’t played a naval game for a while, and when asked, my regular crowd opted for the Great War at sea, with “big guns”. So, that’s exactly what I laid on – a duel between a pair of dreadnought squadrons. The premise was that a few months after Jutland the Germans conducted a sweep of the North Sea, and were heading back to the safety of their protective minefields. Tail-end charlie was R. Adml. Behncke’s III Battle Squadron, made of his own 5th Div. – four König class dreadnoughts – and the 2nd Div., with four of the older Nassau class. Their aim was to make it to safety.

Appearing out of the dawn mist was the Grand Fleet’s 2nd Battle Squadron, commanded by V. Adml. Jerram. He commanded eight dreadnoughts too; three King George V class, four Orion class, and the one-of-a-kind Erin. The Germans were heading south, as were the British, so we set the two battle lines up 15,000 yards apart. This meant that the battle started with the rivals within long range of each other, but still too far away for their shells to penetrate the enemy’s armour.

Both sides had advantages. the British had bigger guns (13.5-inch rather than 12-inch or 11-inch), but the German dreadnoughts had better armour, and their higher-velocity shells had the edge in penetration. Bart filled the sea boots oBencke, flying his flag in the König, while Michael as R. Adml. Engelhardt commanded the 2nd Division, and flew his flag in the Posen. For the British, Campbell (below) played the part of Jerram, with his flag flying in King George V, while at the back of the line R. Adml. Leveson commanded the 2nd Div., with his flagship the Orion. The game was played on a 6×12 foot table.

The game began with both sides lobbing long-range salvos at each other. the British guns couldn’t penetrate at that range, but as the two lines were angled slightly towards each other, the leading German ships could just about hit and damage the leading British ships. The Germans scored the first penetrating hit, knocking out a turret on the Ajax (second ship in line). then though, the range dropped to within 12,000 yards, and the British found they could hit back. So, the gunnery duel proper began in earnest, with both sides lobbing shells at each other, while the two flagships slowly led their lines closer to the enemy.

By now the blows were coming in rapid succession. One of the early casualties was the König, which had two turrets knocked out, and her rudder hit. This meant she turned to starboard – towards the enemy – and then kept turning, throwing the German battle line into disarray. Of course, both sides were suffering. King George V lost two turrets during these exchanges, as did Monarch, while Centurion, Ajax and Conqueror lost one apiece. On the German side, Nassau was pummelled badly (losing three turrets), while all other German dreadnoughts part from Westfalen lost a turret each.

Gunnery was suffering, as a few ships now had their directors hit, so were firing less effectively, under local control. The German turn away to avoid the circling König (above) also hindered German gunnery a bit, but by now the range had closed to the 9,000 yard mark (4.5 nautical miles), and both sides were pounding the heck out of each other, with every hit penetrating the enemy armour.

Over at the back of the two lines the odd rudder hit meant yet more confusion, as Conqueror and Nassau began circling after rudder hits. by now the damage control parties on both sides were working furiously, trying to get turrets back into operation, steering flooding and fires, and fixing shot steering gear. Some turrets were fixed, but yet more were knocked out. Hull boxes were getting knocked away too. with Centurion, König and Kronprinz suffering particularly badly – in fact barely keeping afloat. Still, those shells kept on coming.

In the end it got too much for König, and with her hull boxes reduced to nothing she began to sink. She still had three turrets working though, and kept blazing away until the order came to abandon ship. She gradually became left behind as the two battle lines swept past her. by now the range was down to 6,000 yard – 3 nautical miles. Two British ships were even closer, having turned towards the enemy when their rudders were hit. In other words, things were gradually descending into chaos.

What actually saved everyone was a dense bank of mist, rolling in from the south. This worked to the Germans’ advantage, as they just had to steer towards it and they’d reach safety. In fact, the mist was moving towards them. Just before the mist came the battle reached a crescendo. With König gone and Kronprinz silenced when all her turrets were knocked out, the leading British ships concentrated their fire on Grosser Kurfürst and Markgraf. By the end, poor Markgraf only had one turret left.

Further back, the Nassau was also silenced, but Michael had been hitting back hard, especially against the Orion and Conqueror, who were circling in front of their guns. That’s when the mist finally descended, and the firing petered out. The British too, had to peel off to starboard and break off the action, or risk running into the minefields around Horn’s Reef. So the battle ended, and it was time to count the cost.

The only ship which had actually sunk was the König. However, several German ships were in bad way, with most of their guns knocked out or their hull boxes filled in. The British though, were in just as bad a position. King George V, Ajax and Monarch were down to one working turret apiece, and only Erin and Thunderer remained fully in the fight. However, on points the game had ended in a clear British win, so victory was duly awarded to Jerram and his battered squadron. It was a great little game, and everyone reveled in the firepower at their disposal. The rules, as ever, worked like a charm.