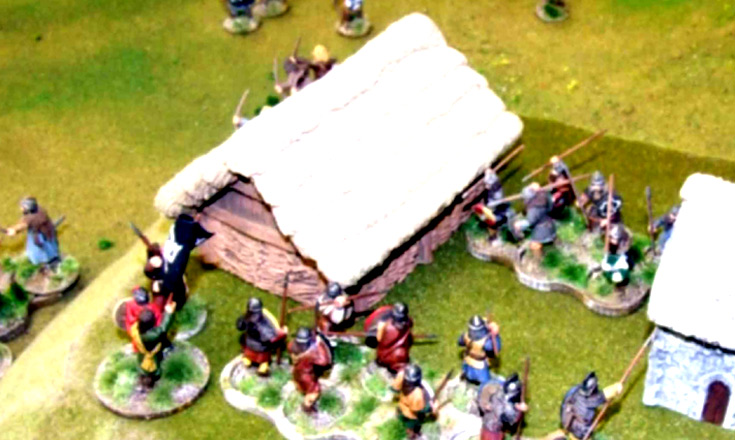 This game was a try-out – giving my two main Orkney gamers a chance to play Dux Britanniarum. That’s the Age of Arthur set produced by the Two Fat Lardies. The came pits two rival warbands – one British, the other Saxon – against each other. it also sets the fighting in a campaign for control of a British kingdom. We plan to run this as a small campaign, possibly set in Caer Colun (now the English county of Essex). Hardly worth the effort I know, but this was in the heady days before Essex became the place known for bombed-out cockneys, jellied eels, Burberry ball caps and spray-on tans. In those days – around 540 AD – it was clearly a more tasteful place. When the campaign proper begins the Britons will be defending the environs of Caesaromagnus (Chelmsford), while the Saxons will be attacking the place from across the river in Ceint (Kent), known to the Britons as “The Lost Lands”. This game though, was merely a no-strings attempt to grasp the rules.

The scenario called for the Saxons to enter the 6×4 foot table along one of the short edges, with the objective of pillaging a church sited just beyond the mid-point of the table. Chris Werb commanded the Saxons, and rolled well – he was able to make three full moves across the table before the Britons arrived on the opposite narrow table edge. By this time the Saxons had almost reached the church, and while the bulk of the force went to the right, to face the oncoming Britons, the two groups of elite troops climbed the hill and took up position beside the church. the Britons did the same – four groups forming a shieldwall facing the bulk of the Saxons, while two groups (including the British elite companions) faced off the Saxons by the church.

The two sides stood facing each other for a turn until the Saxons decided to charge in. What followed was a pretty brutal melee, with both sides taking several casualties. Eventually though the Saxons gained the upper hand – largely because most of their opponents were levies. After three rounds of fighting two British groups broke and ran, and the British shieldwall collapsed. The Saxons poured through the gap, contacting one of the routing levy units and wiping it out to a man. The Saxon warlord Abrecan then swung his men round to finish off the remainder of the British line.

Meanwhile, up on the hill by the church the two sides were constricted by the church and another building. Eventually though the Saxons charged in, hitting the British warriors waiting for them. Another group – the British companions – turned to face the second of the Saxon elite groups, which had worked its way around the church to hit the Britons in the flank. The melee by the church proved to be brief but bloody. The British had the worst of the clash, and the group broke, after suffering four of its six figures as casualties. At that point Bryannus the British warlord decided to withdraw, and the Saxons – bloodied though they were – emerged victorious. If we’d been playing this as part of the campaign the Saxons would have been able to claim a pretty decisive victory, giving them two free months of raiding and pillaging while the Britons reconstituted their army. That though – the campaign – can wait for another day. We all seemed to enjoy the game, and “Lardy Dux” works well – giving a very good feel for the period. Just as importantly the game looked good too, which always helps. We’ll certainly do this again – and soon.