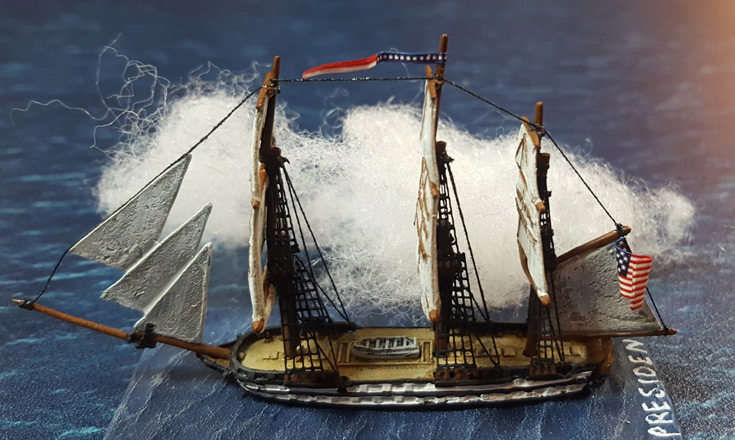 This week we planned to play a Back of Beyond game, but for various reasons that got postponed for a month. So, we fell back on Post Captain, the rules we use to fight single ship actions. This time, we based the game on a historical action – the capture of the American 44-gun “super-frigate” USS President in January 1815.  Bart played the part of Captain Decatur of the President, while Campbell commanded HMS Euryalus, (40 guns) playing the part of Captain Hope. I took charge of the smaller 36-gun frigate HMS Belvidera, which was standing in for the Pomone, commanded by Captain Carteret.

The President was blockaded in New York Harbor, but that January a squall drove the British ships off station. Decatur seized the moment to break out. However, she was spotted, and a chase began. The 40-gun was the fasted ship in the British squadron, and soon she and the Belvidera (actually the Pomone) were the only frigates which had a chance of overhauling the American. That’s where we began the game, with President heading east, and the two British frigates about two miles astern. The north edge of the table, off President’s port beam, was impassible, as it represented the coast of Long Island. So, the chase was on.

In Post Captain, each turn the players roll a die to see if little gusts or lulls in the wind influence their speed that turn. For a few turns Bart rolled well, and although Euryalus had a knot more speed under full sail, President kept her distance. Eventually though, Euryalus came up within range of her bow chasers, and she fired steadily away. When President jinked to fire back, Belvidera was able to gain ground too, and soon she was joining it with her own bow guns.

Now, Bart faced a dilemma. He could turn to fight, and although the Euryalus was a powerful 24-pounder frigate, she wasn’t as well-armed as the President.  So, Bart might well be able to win a straight ship duel. However, there was Belvidera too. President might beat one frigate, but defeating two was pretty unlikely. So, while Bart’s plan was to keep heading west, first he planned to jink again, and this time try to disable the Belvidera, which was then about a mile off her starboard quarter.

Much to Bart’s chagrin, his broadside didn’t hit anything. to make things worse, that was when Campbell scored his first hit. He was firing at the American ship’s rigging, and a ball struck the main topmast, bringing it down. that pretty much guaranteed the President couldn’t get away from a fight. Soon both British frigates were ranging up closer to the American, the Euryalus on her larboard quarter, and Belvidera on her starboard one.

Soon all three frigates were firing intermittently, either with their bow chasers or their broadside batteries. President’s gunners took down Euryalus‘ main top, but lost their own fore topmast in return. Belvidera added to the American’s woes by demolishing most of her mizzen. As senior Captain, Campbell ordered me to “Engage the Enemy More Closely”. to me though, that meant getting in close and battering her with my guns, preferably from a spot just outside the American’s arc of fire. To Campbell though, that really meant “Fire and Board ’em through the smoke”!

In his defence, I have to say that Campbell’s preferred tactic is to ram things. Bart likes charging headlong into fights, while I love battering the shit out of things with guns. Each to his own. So, with President starting to look pretty disabled, we really stood a good chance of winning this without incurring heavy losses. that, of course, was when Campbell’s ramming instinct kicked in.

He closed to point blank range and did just that – exchanging broadsides, and then smacking the Euryalus alongside the port side of the President. That, of course, was when Campbell had a nasty shock. It turned out that the American frigate carried twice as many men as the British one, and her marines were already up in the tops, ready to blaze away. So, Campbell’s puny boarding party got cut down before they had a chance to jump onto the President’s deck.

Campbell fired off one last starboard broadside, then sent everyone on deck. The British tried desperately to cut their own grappling lines, but it was too late. The next turn a swarm of American boarders jumped across to the Euryalus, and fought their way aboard. They captured the waist almost without a fight, and a small knot of British on the focscle were forced to submit. Then, Decatur and his men turned aft, hacking their way through to the quarterdeck. Within minutes it was all over, and a gravely wounded Captain Hope was handing Decatur his sword.

While all this was going on Belvidera had been raking the President from the stern, cutting her masts down to stumps.  She then ranged past the starboard side of the American, and took station off the Belvidera’s bows. That was where we ended the game. President was now a dismasted hulk, but her crew had the Euryalus. The Belvidera stood off the bows of her consort, ready to pour in shot. In those circumstances Decatur would have surrendered. I suspect Bart wouldn’t have though, but we’ll never know, as we ran out of time.

So, the game was declared a draw, even though technically at that point Bart was winning. He claimed he could have scuttled the President and sailed away in his prize. In truth he might have tried, but Belvidera held all the aces, and could have raked the Euryalus until she surrendered. I’ll be interested to see what Bart’s blog says – you’ll find it in the Links section! This was a fun game though, and even though we hadn’t played it for ages the basics came back top us all in no time. However, we were pushing the envelope a bit when it came to boarding actions, as none of us had ever fought one before. However, after a bit of rules browsing it all came together, and a great little game was had by all.