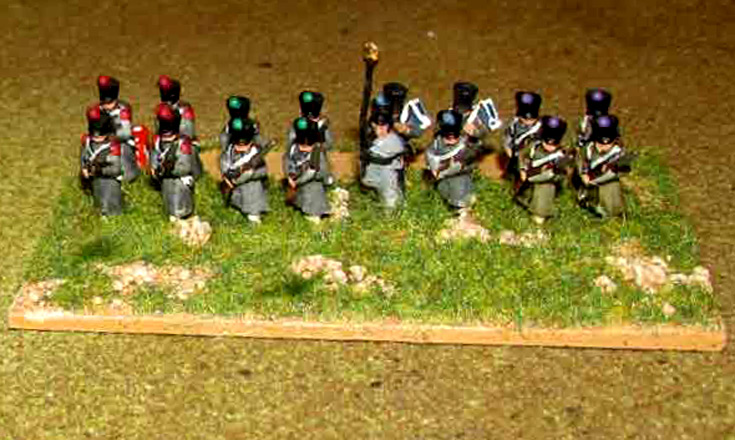 I know – 15mm. The shame of it…  The thing was, I found myself in Edinburgh with no game organised, and a temporary lack of regular opponents. Fortunately, Jack Glanville and Derek Hodge were running this Napoleonic game, to try out the new Blucher rules. My old wargame “oppo” Dougie Trail was also in town for the day, and he wanted to try the rules too. They were completely new to me though, and so I decided to watch the game, rather than take part. So, the two Greek gamers Paul and his buddy took charge of the Russians, Jack and Dougie ran the French army, and Derek umpired. They certainly needed an umpire, as apart from Derek only Jack was fully familiar with the rules. However, their interpretations were often at odds, so there was a lot of rules consulting, aided by Sandy, another Blucher aficionado who offered advice from the sidelines. I have to say, I’m not really familiar with Sam Mustafa’s rules, and I’ve never tried Blucher’s Napoleonic predecessors Grande Armee and Lasalle. I have however played Maurice, the card-driven Seven Years War system (which I didn’t rate), and I’ve seen games of Longstreet in progress.

The thing is, these are all essentially grand tactical games, where each unit – or base – represents a brigade. I’m not really fond of games where a brigade is represented by a dozen figures or so, and an army by a few hundred. No, I cut my Napoleonic teeth on big battalion rules, where a brigade looked like a brigade, and a corps level game meant the table was buckling under the weight of the lead – 28mm lead. Still, I was interested to see how the new-fangled rules would work. They certainly have some interesting ideas. For starters, both sides deployed cards to show where their troops were, rather than the troops themselves. These were turned over when the two sides got close enough to identify each other. Then, both players secretly roll a number of “motivation” dice – usually three – which determines how many actions the other side can perform in a turn. You don’t know how many these are until the opponent stops you, and reveals the dice. That’s a nice way to add some friction into the command process – a nice idea.

The battle itself wasn’t anything to write home about. The table was largely devoid of terrain, but I could see from what there was that the poor Russians would be up against it from the start. The French had a marsh protecting their left flank, their centre was anchored on a village, and their right was dominated by a large steep hill. All the Russians got was a wood on their left flank, which hindered their ability to make flanking moves against the French right, and a small hill in the centre of the table. Small fields – scraps of felt – littered the tabletop, but had no influence on the game. Finally a very wide road ran through the centre of the 6×4 foot table, passing from one side’s deployment area to the other, through the village. Worse still for the Russians the French were on the defensive, so the onus was on them to drive the French off the hill and out of the village. As both sides had equal numbers of troops, this wasn’t going to be easy!

The next thing I learned about Blucher is that artillery batteries or cavalry and infantry brigades all occupy the same space on the tabletop. Derek had done sterling work sticking his old 15mm figures onto Blucher-friendly bases – each the size of a playing card – but to my eye it looked a little strange – not like any Napoleonic game I’d played before. The Russians started by advancing against the French right – the hill – while their gun batteries pounded the French around the village. The guns only get six shots before they are – rather inexplicably – removed from the table. There’s no ammunition reserves in Blucher – massed gun batteries seem to be a “fire and forget” weapon. Firing is incredibly simple. Roll a number of dice, and you hit the enemy on a “6” – or a “5 or 6” if you’ve got heavy guns. Each infantry and cavalry base starts with a strength – usually 6, and each hit whittles this down. When it reached zero the unit is removed. Musketry works the same, but only at very close range. There’s a form of skirmish fire at longer range, but of course there aren’t any skirmishers on the table. Like all other tactical features this has been streamlined out of the game, as have formations (no worrying about line, column or square here), while morale also relies on simple D6 die rolls.

In our game the Russians reached the hill, whereupon the French revealed themselves to be a division of Poles. They repelled all Russian attempts to take the hill, while pouring in flanking fire from a supporting French gun battery outside the village. The only bright spot for the Russians was that a French infantry advance in the centre of the table was driven back by long-range artillery fire, and the Russian guns also drove the French defenders out of the village, thanks to an adverse morale test. A brigade of Cossacks rode forward to claim the town, only to be driven back when a second line of French troops was revealed behind the buildings.

On the Russian left the massed Russian cavalry tried an outflanking move worthy of Frederick at Leuthen, but the mechanics of the game got in the way of glory, as rather than being caught in the flank the end Polish brigade merely turned to face the threat. Then the French reserves – a division of their own cavalry – charged forward, and the two sides spent the rest of the game hacking it out on the Russian left or the French right. Any other Russian moves were stopped short for lack of manoeuvre points, while all the French had to do was hold their ground, leaving lots of points to move troops wherever they were needed. The game – rather inevitably – ended in a French defensive victory.

I found some of the ideas quite innovative, but essentially I decided that Blucher wasn’t for me. The combat systems are too simplistic for my tastes, and you could achieve the same moving cards around the table. In fact that’s exactly what was happening across the room, where a couple of club members were trying out Scharnhorst, the strategic version of Blucher which acts as a pre-game campaign system. The guys then played out the game using the set of cards provided in the Hundred Days bolt-on card box you can buy to go with Blucher. These guys though are board gamers more than figure gamers, and for them moving cards around is every bit as good as shuffling lead. For me though, I want to get my toys onto the tabletop – proper-sized 36 figure battalions of 28mm French, where I can revel in the sight of units forming columns, detaching skirmishers and deploying in historical formations. Each, I suppose, to their own. While Blucher was interesting, I don’t feel I’ll be trading in my large battalion rules and lead any time soon!