This week we jumped at the chance to play a game in a local hall, while conforming to current Covid restrictions. The result was this multi-player “grand skirmish” involving Thomas’ Burgundians, Gyles’ English, Lindsay’s Flemish and my French. there wasn’t much in the way of foreplay – this was very much a put your toys out and get going type of game. We played it out on a 6×4 foot table. 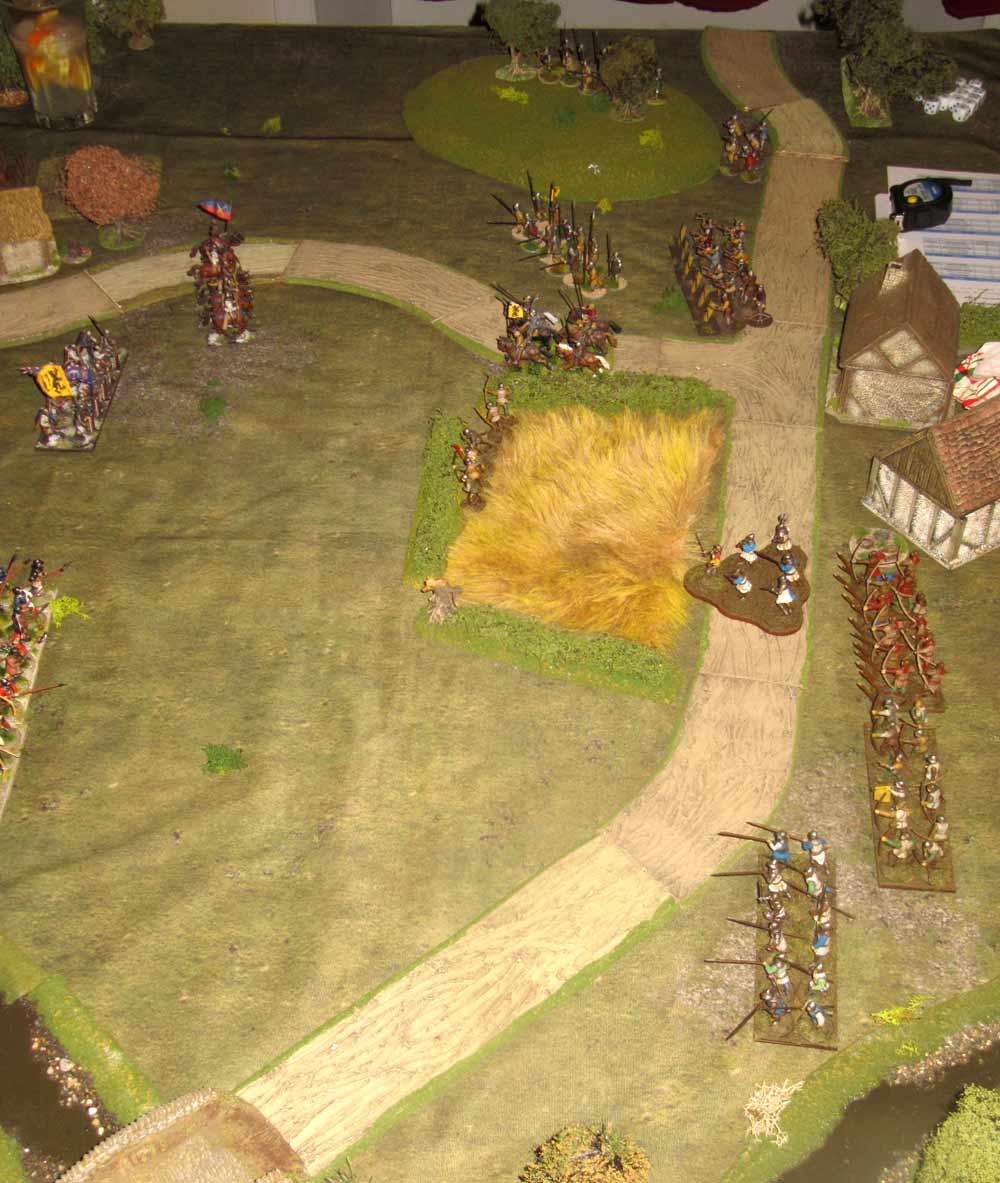 For the record the game was set just outside Wielsbeke, a village north of Courtrai (Kortrijk). On the northern side of the table was the Anglo-Flemish force, with the locals on the right and the English on the left, with their flank resting on the River Leie. Facing them to the south was the Franco-Burgundian force, with the Burgundians on the left and the French on the right. 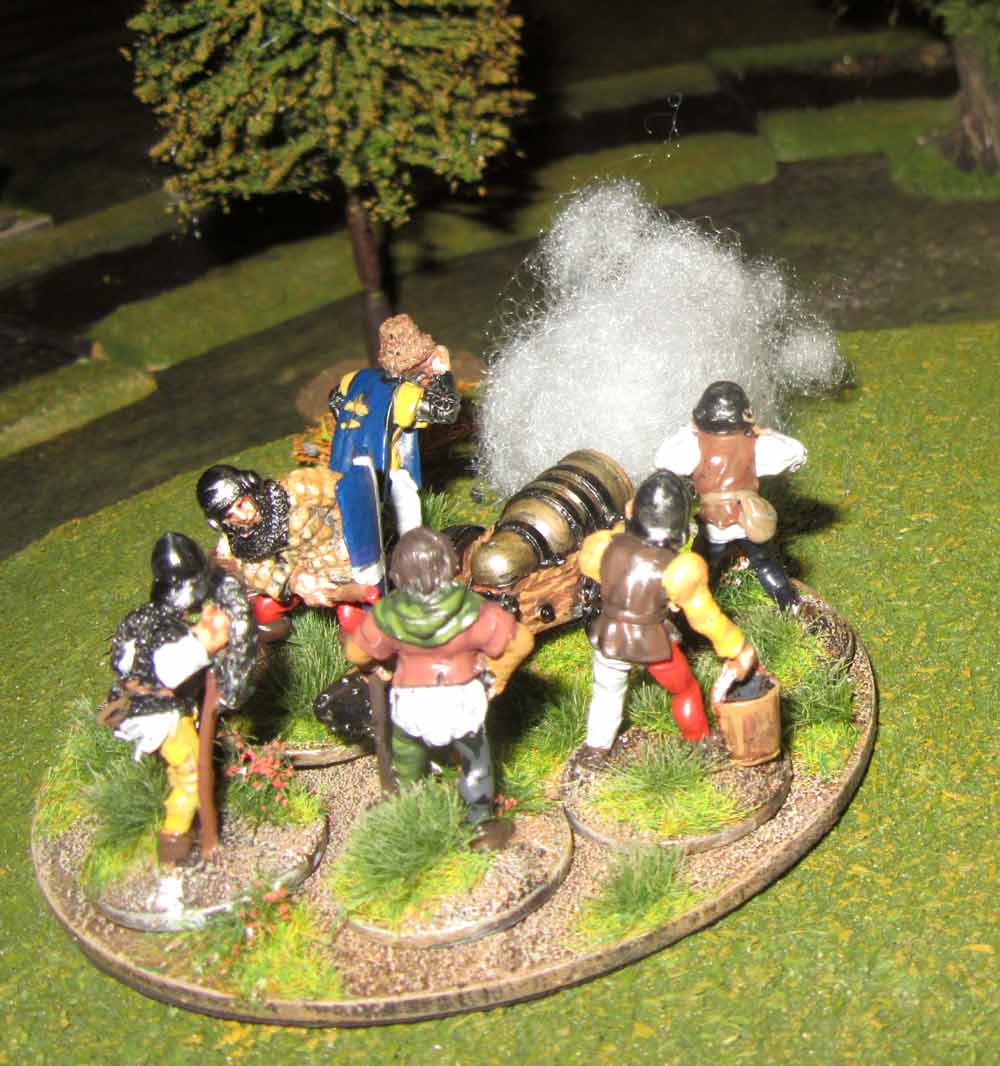 A bridge spanned the river, but my French were the only ones deployed on that side of the water. There was a handy hill there where I placed my immobile gun. It actually started the game, with a telling shot at a unit of English horsemen. After that though, the crew spent most of the game trying to reload. You see, they needed a 10 or more on 2D6 to pull it off… 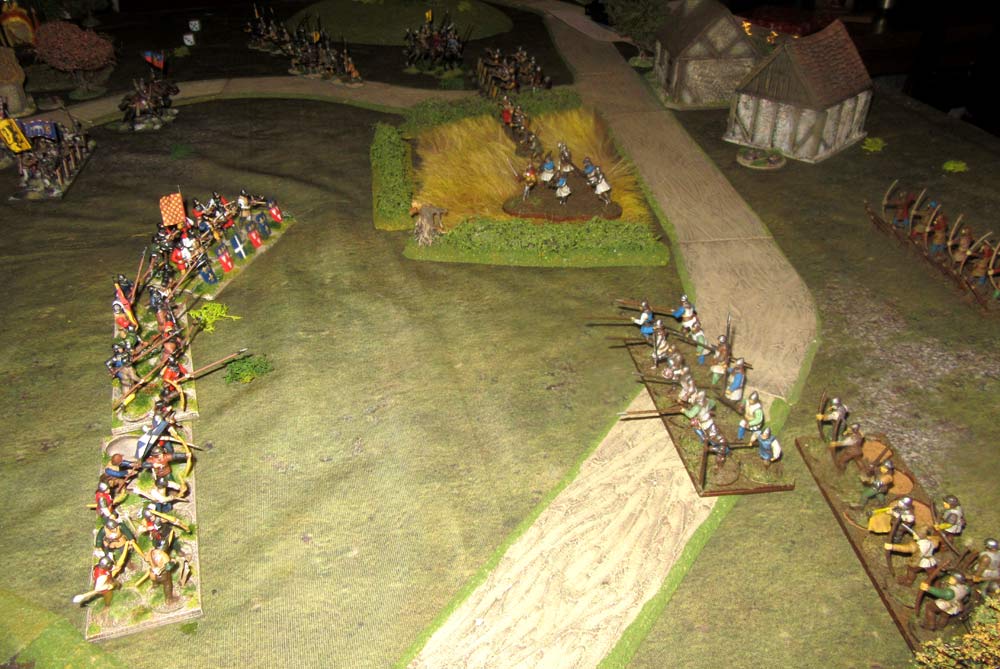 In the main battle though both sides advanced cautiously towards each other. We had a problem coordinating the four contingents, especially as on one side Lindsay and Thomas were eagerly advancing as fast as they could. On our side I advanced towards Glyes, only to stop and start pinging away with my crossbowmen and francs-archers. The English, of course, replied with their longbows. 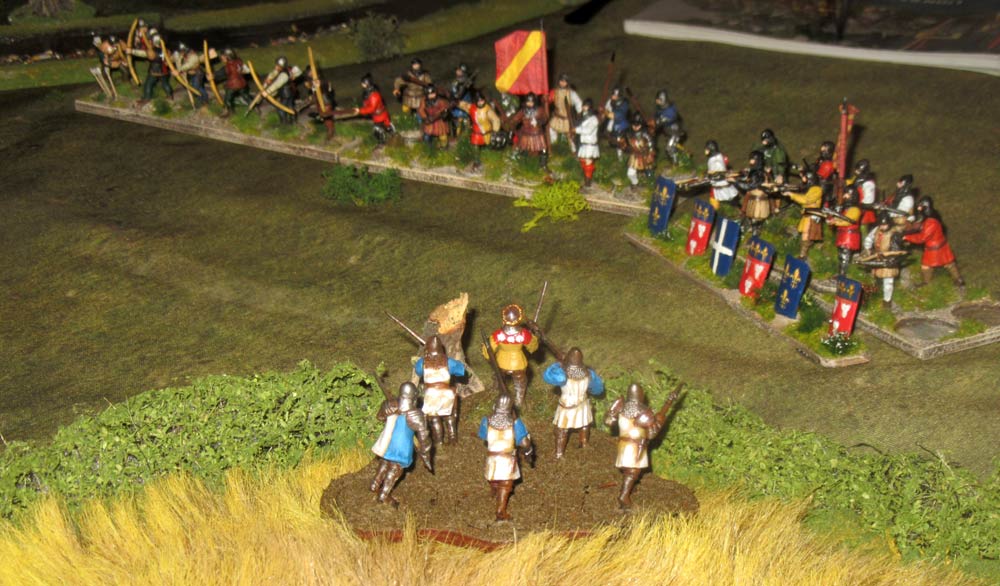 We both suffered in the exchange, and I was saved from greater casualties by Gyles’ poor activation rolls. Still, he managed to advance his dismounted knights through a cornfield, to launch a spirited attack on my crossbowmen. At the critical moment though, the knights failed to activate, and were badly shot up by the French. A lucky crossbow bolt even took out the English leader, Thomas, Lord Camoys. After that we traded arrows and bolts until another chance for glory arose. 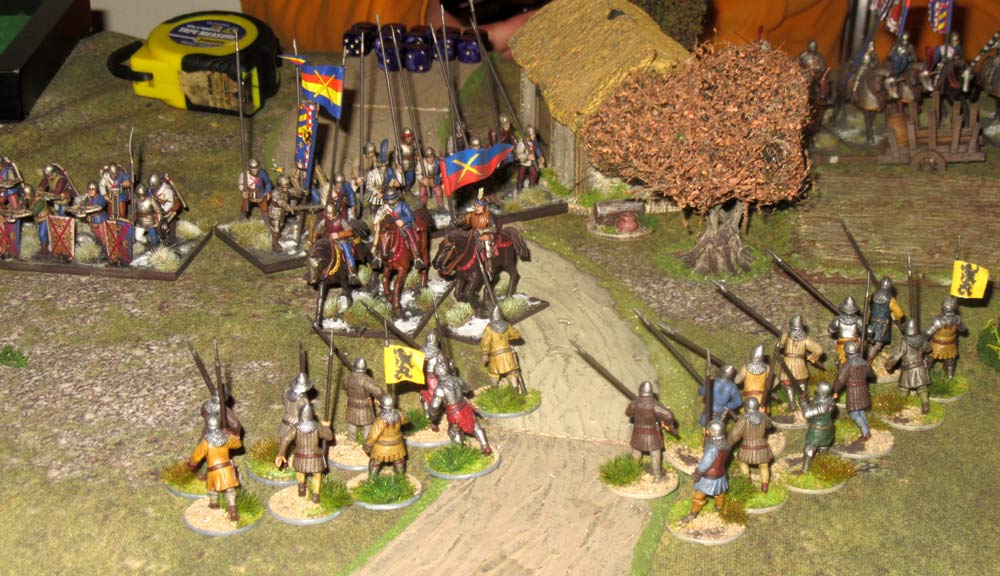 Over on the western side of the table the Burgundians and Flemings had come to grips. Thomas tried to disrupt the Flemish spearmen with his mounted archers, only to be caught by them and chopped up. The Burgundian pikes were thrown in next, and a battle royal developed, with both sides suffering hefty casualties. So far though, Thomas hadn’t committed his mounted men-at-arms, led by his leader, Phillipe de Brave. 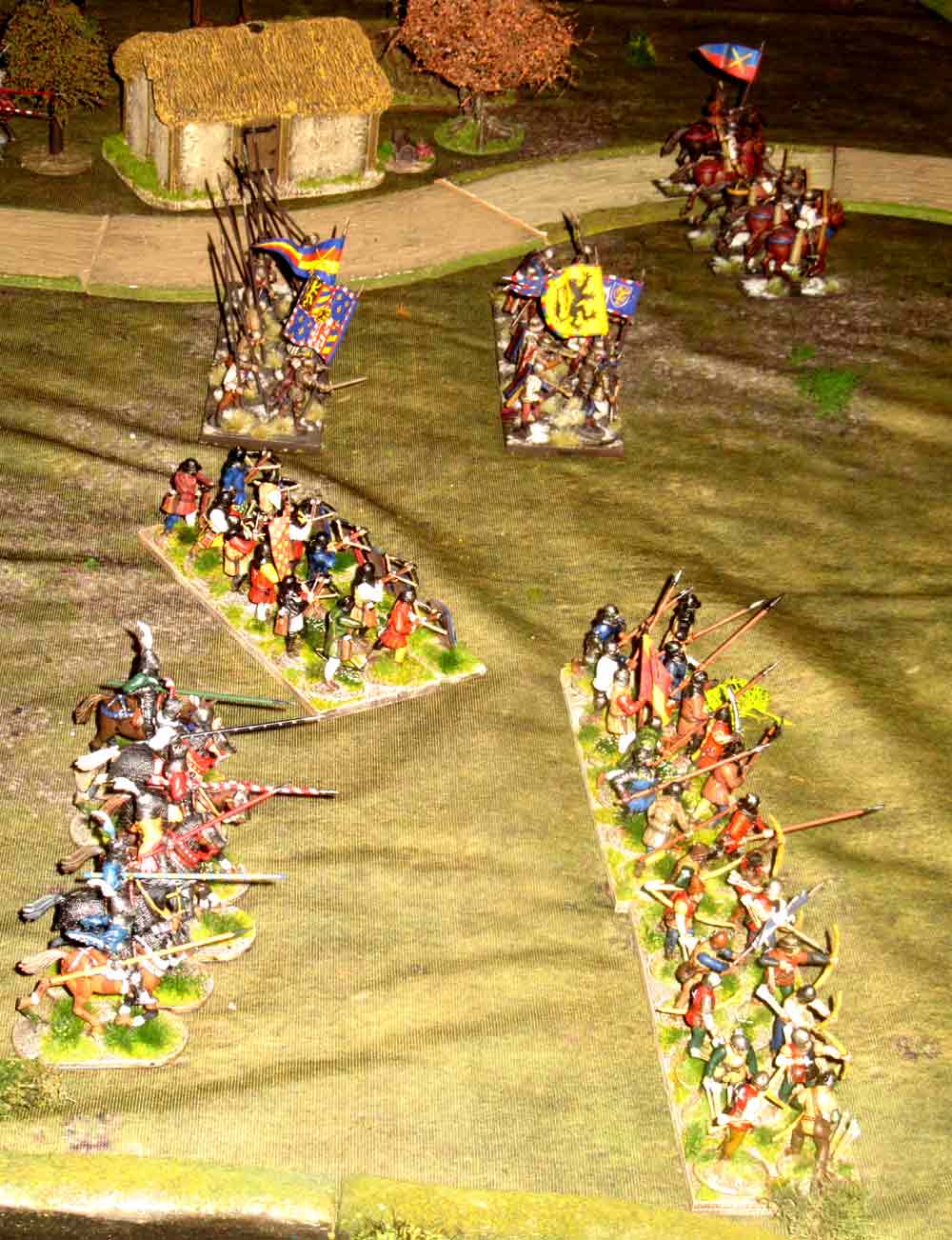 On my side of the table Gyles tried another sneaky move, sending his mounted yeomen to attack my isolated gun crew. However, while my own mounted knights cantered across a ford to support the gun, the gunners finally managed to reload, and fired off a second shot. that pretty much saw off the English threat, as most of the riders were mown down. 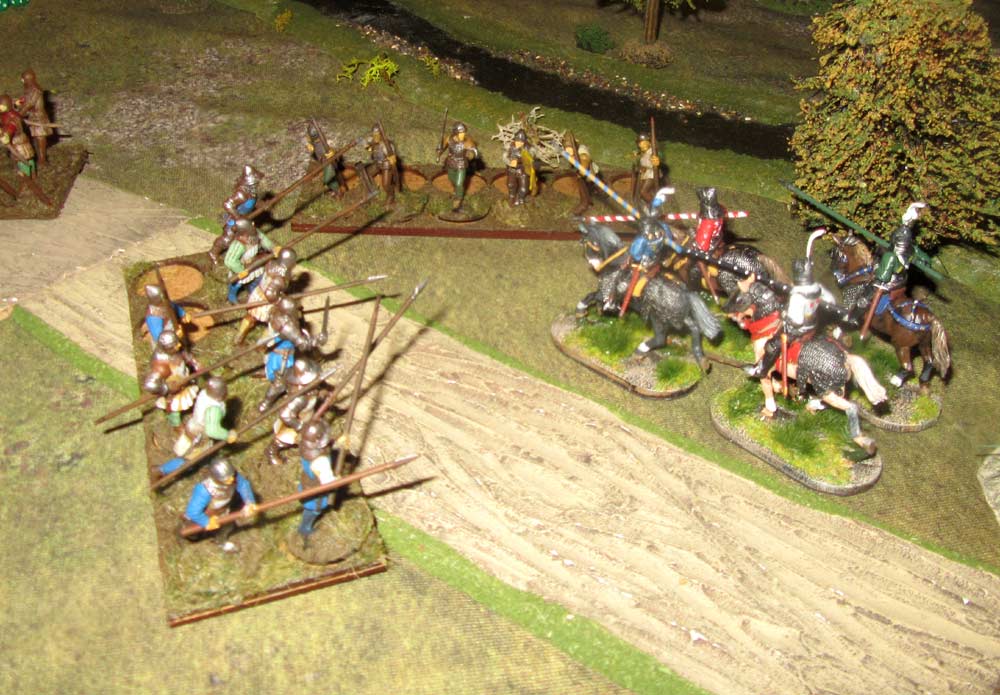 The battle was now reaching a climax. Both sides had suffered, but the French and the Flemings were still relatively fresh.  I tried to throw my men-at-arms across the bridge, but after riding down some English archers the knights were caught by English spearmen, and badly chopped up. My leader Robert, le Grand Signeur d’ Herston survived though, but his unit was all but wiped out. 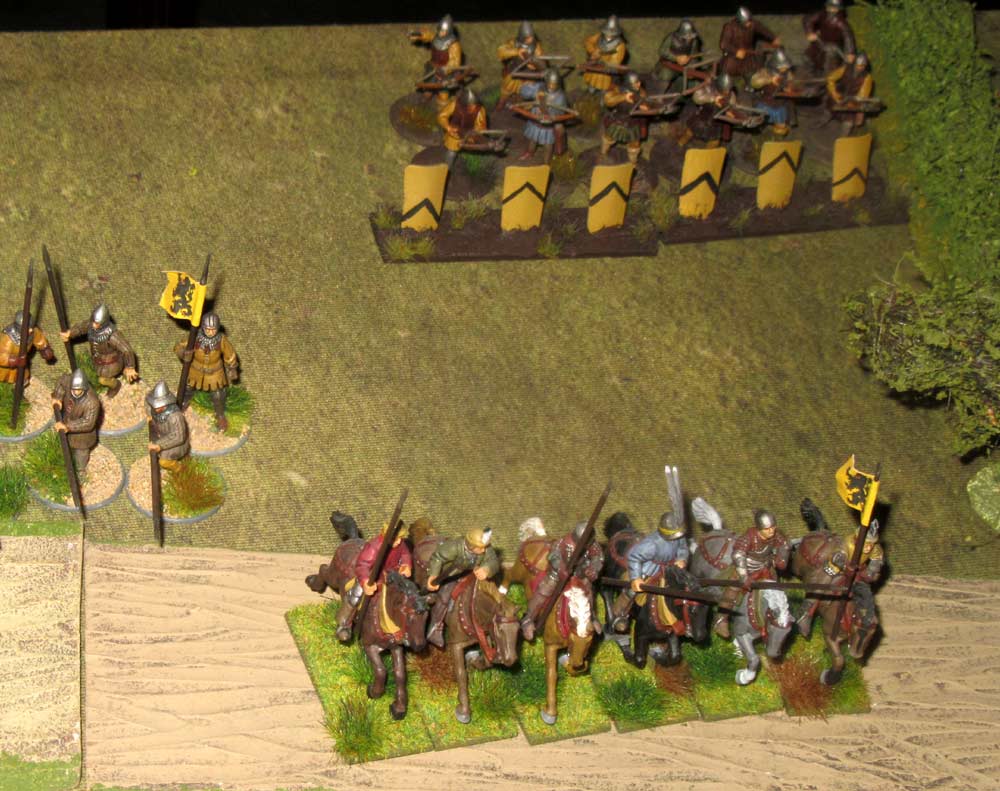 Meanwhile the Flemings launched a fresh attack, spearheaded by Lindsay’s leader Piet van Graff and his dismounted men-at-arms. They were stopped though, by the Burgundian crossbows, who had already just seen off the Flemish mounted yeomen shown above. It was clear that by now all four factions were running out of steam. SO, we said we’d play for another turn, then call it a night. 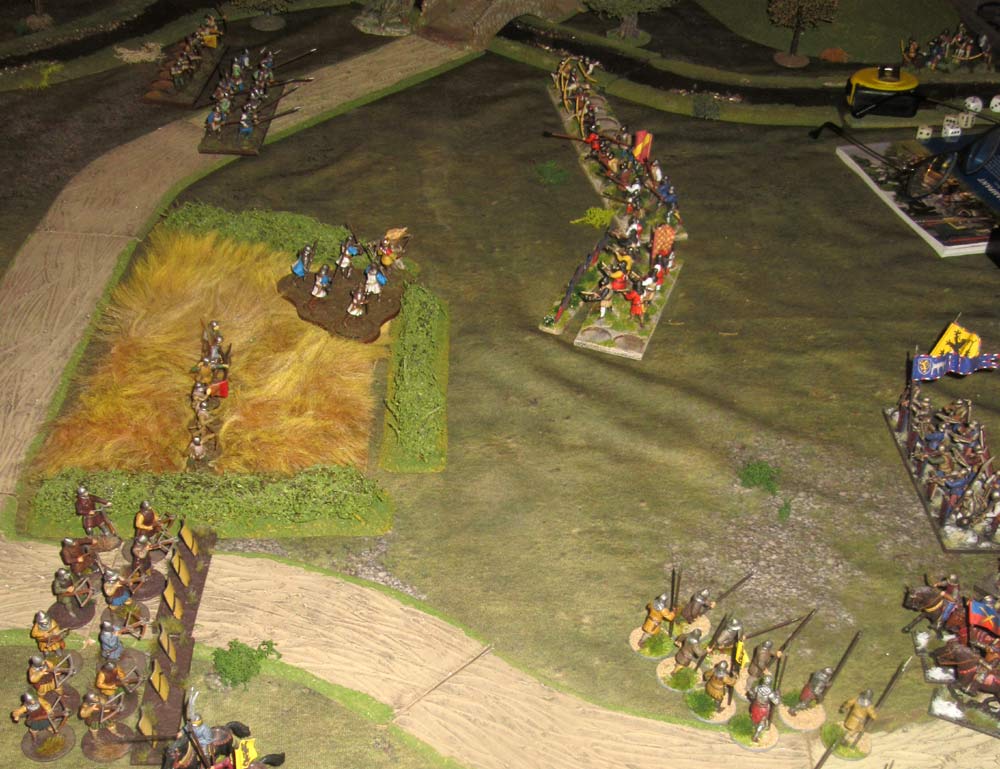 In the end that turn was pretty uneventful, as most players lost their activation rolls early on. The Burgundians and French crossbowmen caused a few more casualties, and the English lost a unit of spearmen, whose morale finally snapped. So, the game was duly declared a draw, and we packed our toys away. The main thing is, everyone had fun, and were happy as clams for the chance to actually have a face-to-face game. With luck after the next round of restrictions ease then we can try this again. 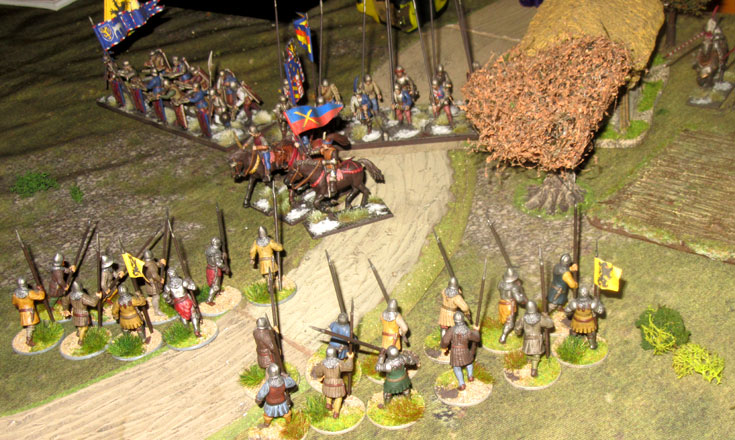