This was another in our recent games where we try to get our collective heads around Piquet’s Field of Battle rules. Our last 28mm foray was into the Napoleonic era, but for this we moved it back into the Seven Years War. It was a small clash between the French and the Western Allies a little to the east of Münster, a fictitious scrap set amid the preliminaries to the Battle of Hastenbeck. 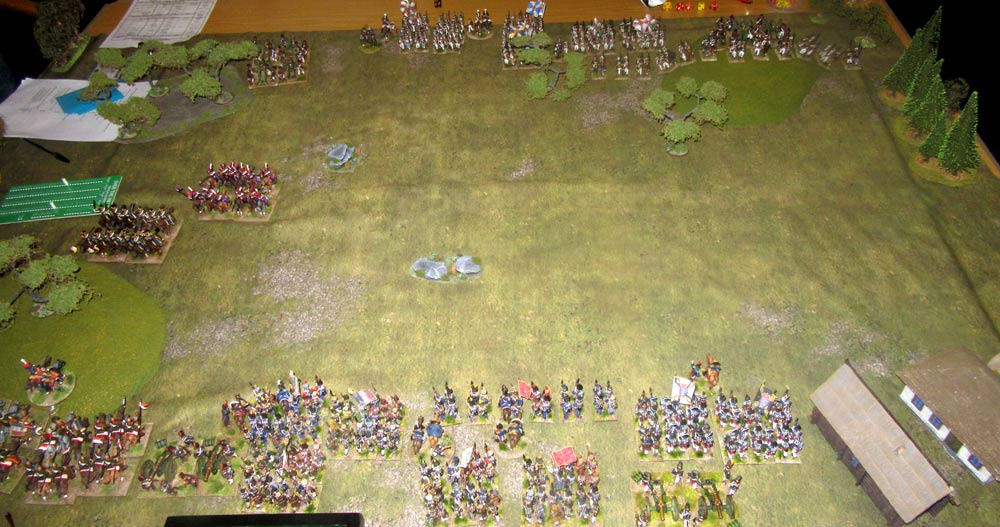 Mally and I played the Western Allies, led by the less than able Duke of Cumberland, while the French were commanded by Sean and my visiting chum Peter Marshall, who played the part of the slightly more able General Chevert. We played the game on a fairly open 6×4 foot battlefield, with a small divisional-sized force on each side. Each of us commanded a brigade each of infantry and cavalry. As this was still a “learning curve” game, we really wanted to keep things simple. 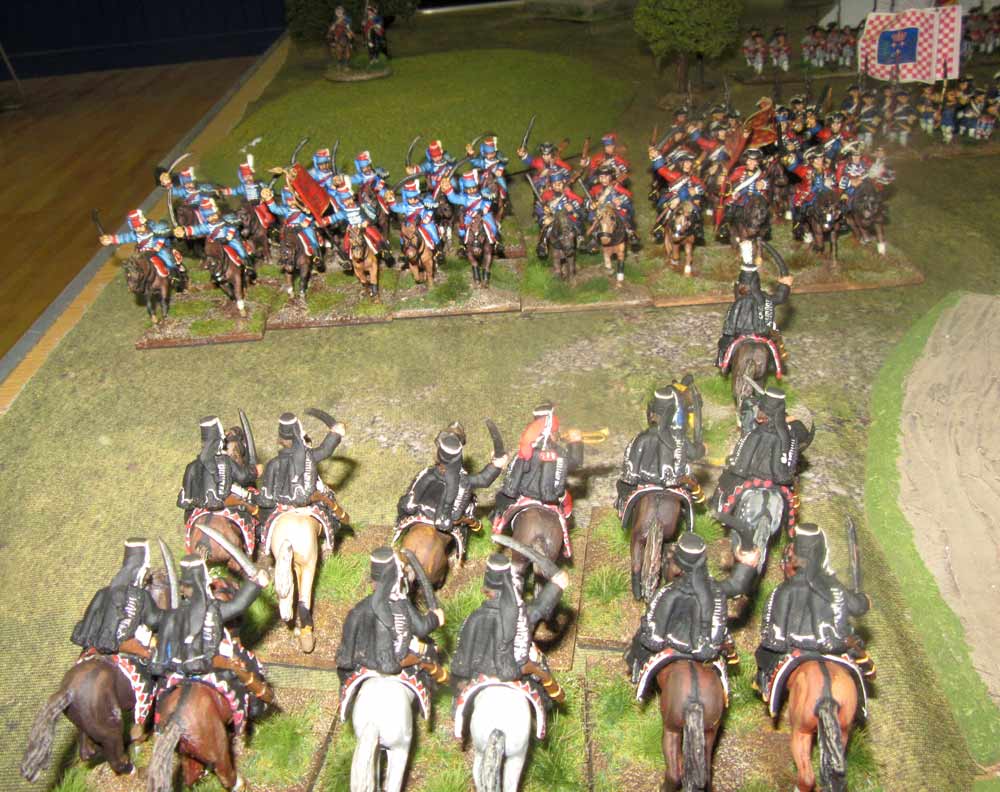 In Field of Battle it’s all about getting off to a good start. The French won the initiative, and used their Move card to surge forward. A second Move card followed, while our Allies were still in our starting positions. Peter used this second move to charge his Bercheny Hussars and La Reine dragoons into the Hanovarian cavalry regiment facing him, and routed them. Mally counter-attacked with his Prussian “death’s head” hussars, and drove the French hussars back. So far then, honours were fairly even. 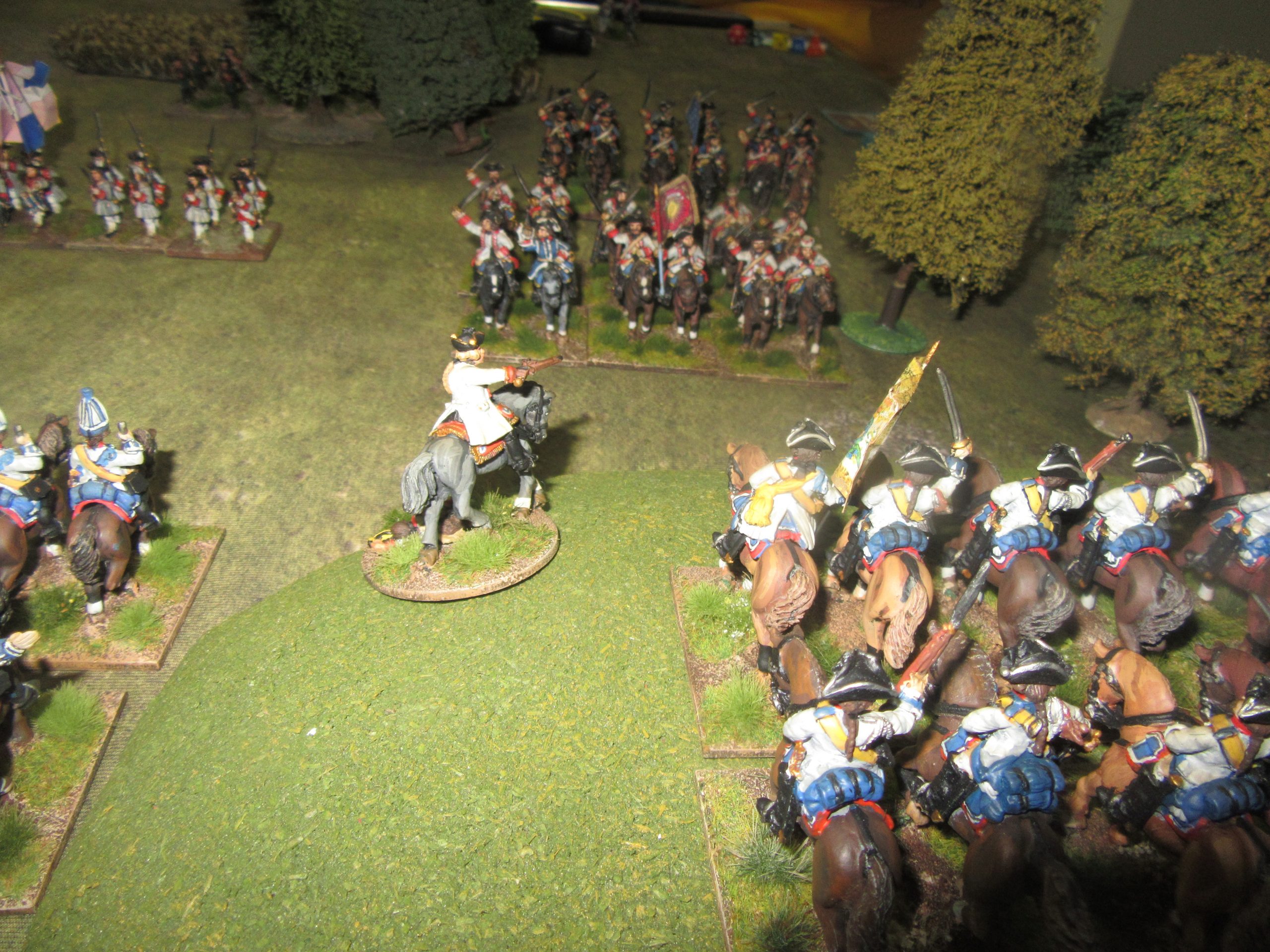 Over on my flank things unraveled surprisingly quickly. Two French cavalry regiments snaked through the woods to charge uphill against my Hanovarian Breidenbach dragoons. We drove back the first unit – the Bourbon-Busset cavalry, but my second one was routed by the cavalry of the Dauphin regiment. Not to be thwarted, the French then turned a Melee card, and duly charged in again. 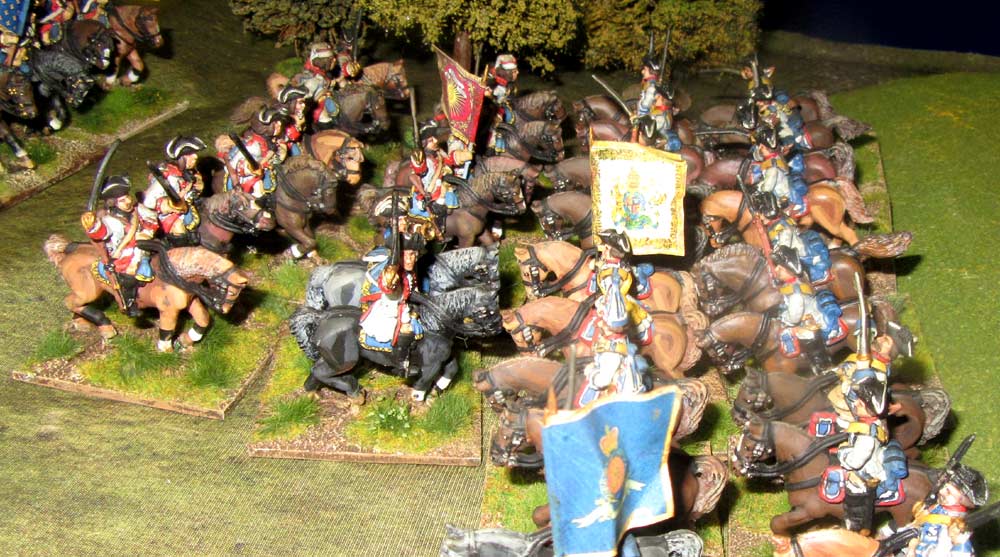 That melee went badly wrong. I’d just managed to rally one half of my regiment, but they were still looking a little shaky. Both were then piled into by the French cavalry, who swept my dragoons from the field. Over on the far side of the table the Hanovarian cavalry were also destroyed, which neatly took us down to ) on our Army Morale Chart. 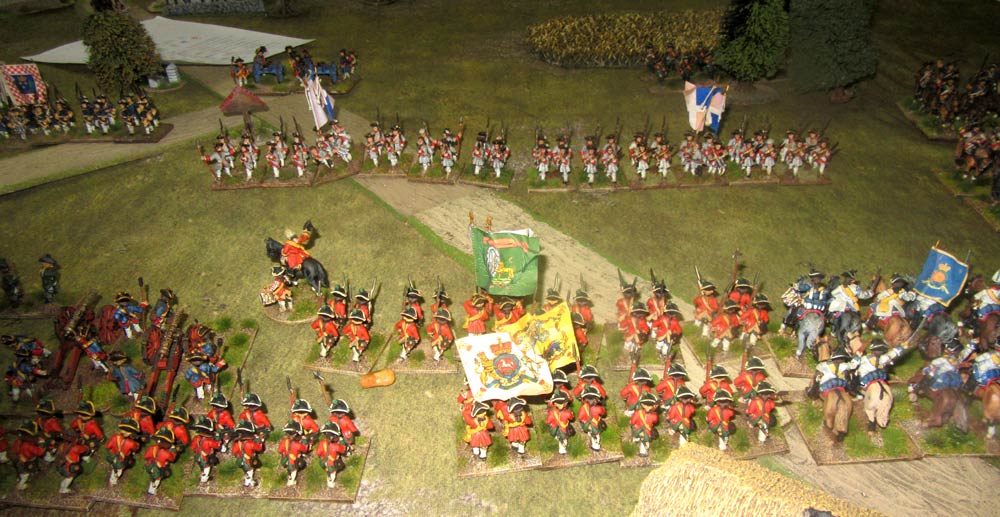 It was our turn to turn some cards though, having just managed to win a little lull in the middle of their run, pulling a Leadership card. The last thing we needed was an Army Morale card, which of course was the next one in our deck. That of course was exactly what turned up. We rolled the die, and sure enough, our morale broke and we lost the game! The infantry hadn’t even got within musket range of each other  – this had all been decided by the cavalry clashes, which dropped our Army Morale to zero. 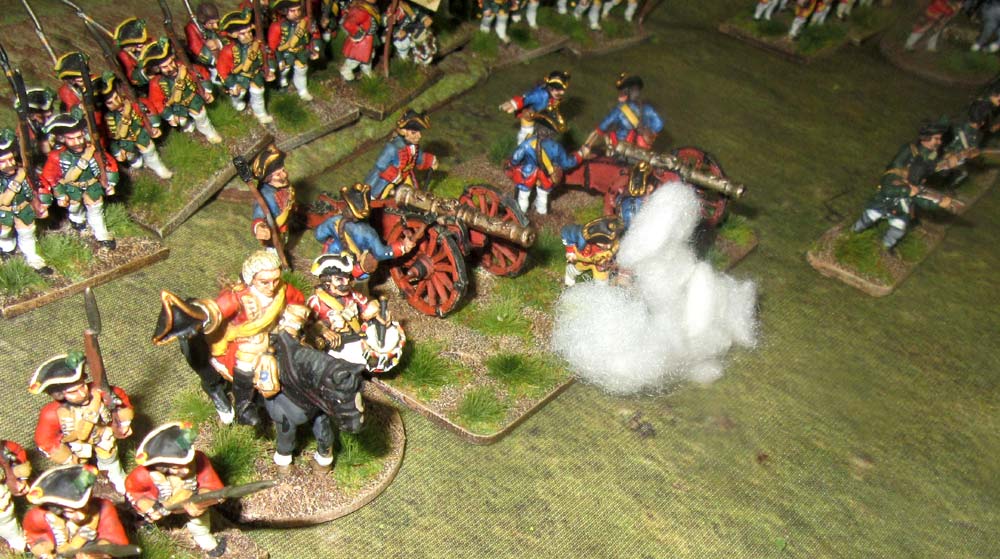 Taking pity on us, and seeing it was only 8.30pm, Bob decided to prolong the game, by ignoring the result. So, we were back in business. Almost immediately, things started going a little better. Our Hanovarian guns had been firing at a French infantry battalion, which finally routed, making a nice gap in their line just as they came within musket range. As the two sides closed though, and the Prussian hussars were distracted by pursuing their French counterparts, the French were able to turn our left flank, using a battalion of German infantry and their regiment of dragoons. 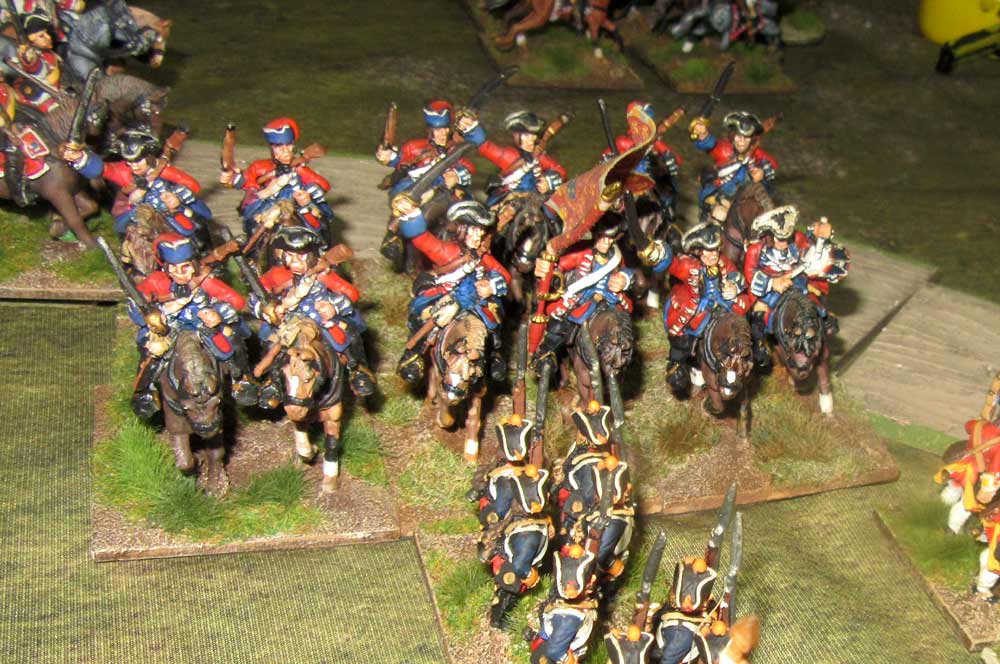 So, they duly piled into the flank of our reserve unit – von Toll’s Hessian regiment, disordered them nd forced it back – a sort of crabwise sidestep. That left our British battalion of 25th Foot horribly exposed, especially as two enemy battalions (one French, the other German) were advancing against them front and flank. At that point only a unit of Hanovarian jaegers stood between us and a second disaster. 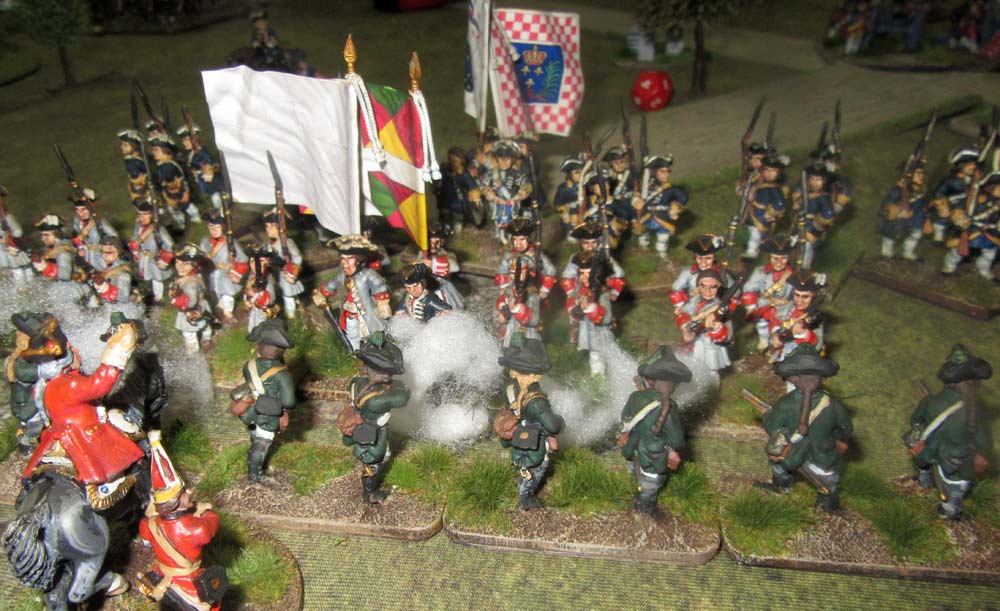 What happened then, was nothing short of a miracle. When the Tournaisis regiment charged in, the jaegers didn’t evade, but stood and fired. they actually drove their assailants back, and then a second volley following the turn of an Infantry Fire card saw the French falling back. We weren’t out of the woods though, as the French were still attacking our flank, but it bought us some time. 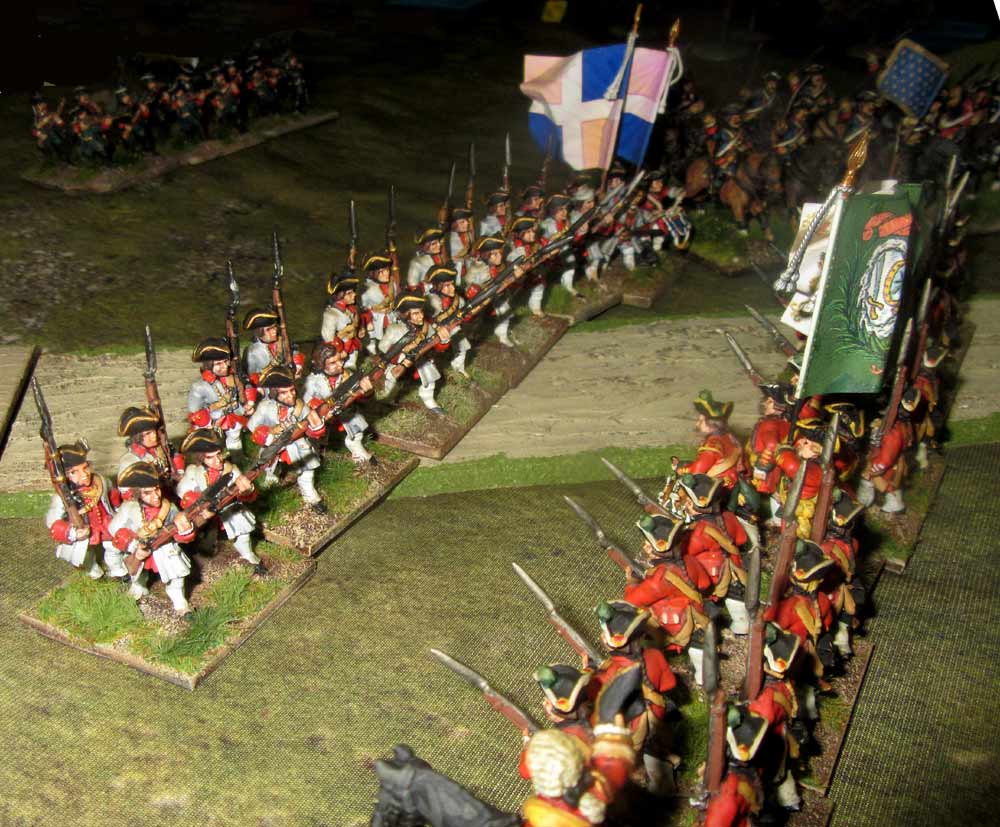 Over in the centre the two sides had closed within musket range of each other. Our run of luck held, as the fire of the Hanovarians was the more effective, and first a battalion of the La Condé regiment and then one of the German La Marck regiment were driven back. So, the first assault fizzled out, and the next few phases saw the French commanders hurriedly redressing their ranks and trying to recover from their losses. Over on the French right though, Peter was going all-out to roll up the Allied line. 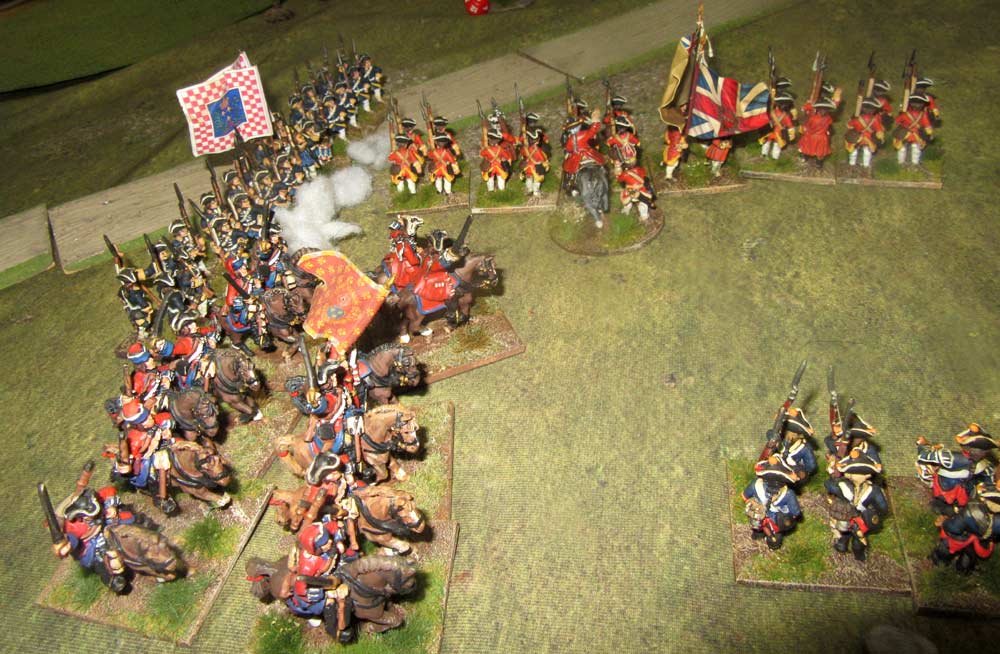 The La Reine dragoons had done well, but had become bogged down driving back the Hessian battalion they’d caught in the flank. That left the British 20th foot, which now had the cavalry behind them, and a second battalion of the La Marck regiment approaching their flank. It wasn’t a good position to be in. Amazingly, they survived a point-blank volley from the Germans, and then amazingly repulsed a flank attack. It was at that point that we brought the game to an end. The Allies had already lost, but by playing on we’d turned what could otherwise have been a rout into an orderly retreat. At least that’s our story. As for the rules, they worked surprisingly well, and even Peter, who’d never used them before thought they had merit. So, our experiment with them will continue. 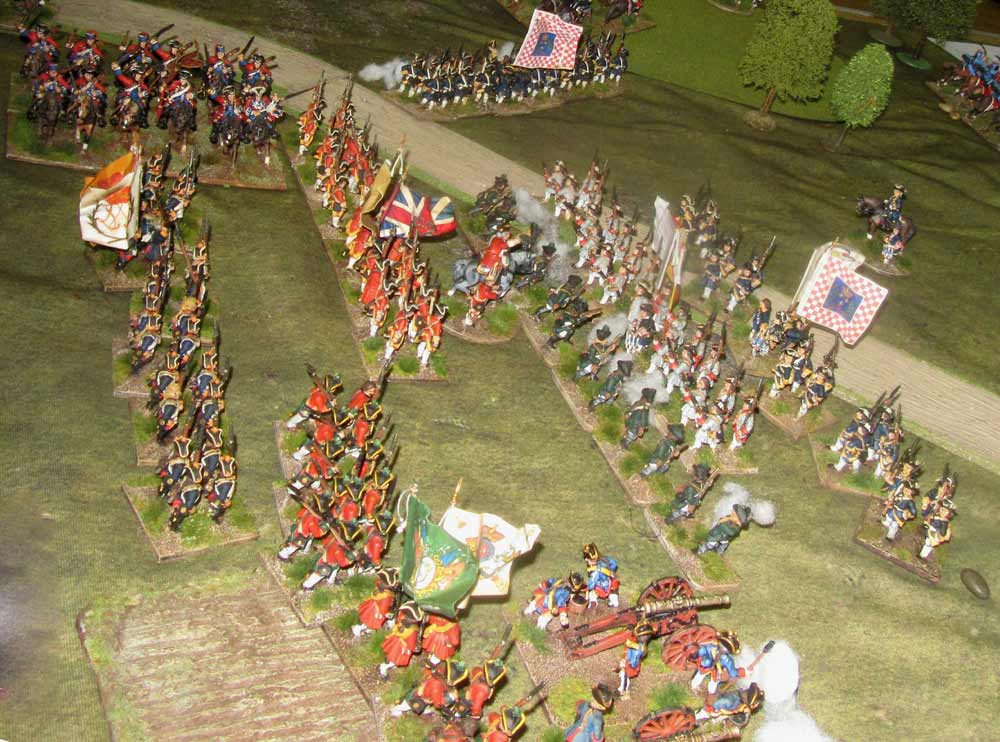