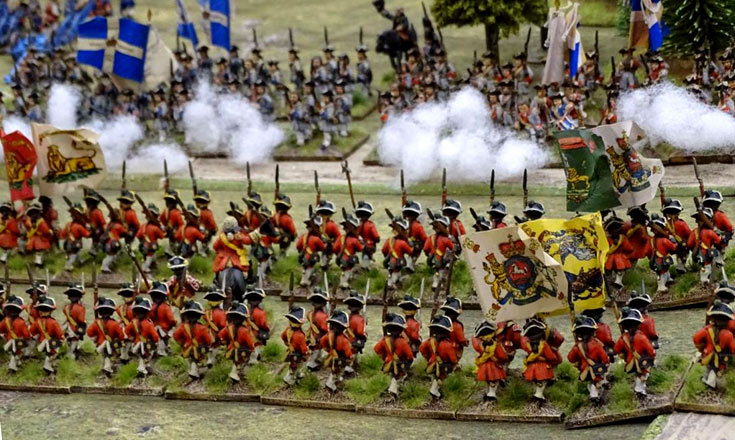 It’s been ages since my last Seven Years War game. That’s unusual, as it’s my favourite period. However, since the fire in my Edinburgh flat last January, I’d steam-leaned the smoke damage to all of my lead collection, apart from my SYW figures,  and the Back of Beyond ones. Surprisingly though,m there wasn’t much damage to this lot, so when the team wanted a Black Powder game, out they came.

This battle was really a rules-learning exercise, and was deliberately too big to finish in a club night. For me it was all about giving everyone a chance to experience the rules, and to test them in a range of situations. Well, those things and the desire to lay on a pretty-looking game. Mind you, it’s hard not to make a SYW battle look anything other than pretty.

This fight pitted my French (played by Gyles and I) against an Allied force (commanded by Lindsay and Mally). This was strange in itself – Mally (or Malcolm) never plays a game – he’s a wargaming voyeur. This time we coerced him into having a go for himself. It was a straightforward encounter battle, with two 4-battalion brigades per side, backed up by two 2-regiment brigades of cavalry, and a brace of gun batteries. We played it out on an 8×6 foot table, using 66% ranges and distances (scaled back a third from the very long distances given in the rules), and with everyone having command ratings of 7 or 8.

In this game, Mally took the Allied left, Lindsay the right, while Gyles was the left-wing French commander and I took the right wing. With our commands divided up (essentially and infantry and cavalry brigade apiece), we set to. Both sides advanced to within musket range pretty quickly, with the Allies getting to the centre of the table first, thanks to some bad command rolls on the French side. The cavalry held back for the first couple of turns, to see how things would pan out in the centre.

Despite being a “newbie”, Mally handled his Hanovarian brigade with aplomb, arraying it with two battalions up and two back, supported by his gun battery on his left. My French started to suffer, but I was holding my own too. We both had to retire our front line during the firefight, and bring up the second one, as “hits” started to mount. In other words it was a real hum-dinger of a firefight!

He decided to support it with an advance by the Hanovarian cavalry on their left flank. They advanced towards the village on my right, passing through a hedged wheat field. I had trouble clearing the village, but when the charge came my horsemen repulsed the Hanovarian cavalry. Mally tried again, and the same thing happened. Thanks to the village there wasn’t really enough space to get both cavalry regiments into action. So, we both used our second cavalry unit to support the first one. In the end we both pulled back, battered but unbowed.

In the centre Lindsay and Gyles had got into action now, with Lindsay’s Hessians supporting the Hanovarians on their left. Gyles relied on his guns to do the damage, although his two Swiss battalions managed to help prop up my left flank. He kept his two German battalions back to prop up our left flank, in case the cavalry got into trouble. Both of these brigades though, never really got drawn into the thick of the fight. Instead, over on their side of the table,  both Lindsay and Gyles left it up to their cavalry to win the day.

Both sides advanced towards each other cautiously, bthen Lindsay threw caution to the wind and charged forward with her Hanovarian cavalry. GThe French held though,  and in the end both sides retired, having taken several “hits”, put passed their “break tests”.  Both sides went in again with their reserves, but it was Gyles’ Dragoons du Roi who had the edge. The Hanovarian Grothaus regiment broke, and the  already battered Hodenberg regiment retired .  Gyles then decided to rally where he was, rather than give chase. His plan now was to smack his horse into the flank of the enemy infantry .

The French certainly needed a hand. By this stage the Hanovarians had lost one of their battalions, but the French had lost two, both from my brigade. Everyone else was looking a little shaky, particularly on the French side, after Mally switched his lines around, and fired a series of devastating volleys into the French ranks. For a “newbie” be was handling his troops remarkably well! The only bright spot was that the French guns were doing real damage.

That’s when we ran out of time. The battle was still going great guns, and victory could have gone to either side. On the Allied left the Allied cavalry had been driven back, and one unit had broken. However, so had the French Bercheny hussars, so honours were fairly even. In the main infantry fight, the Hanovarians had the edge, although Lindsay’s mixed Hessian and British brigade was suffering from French musketry and artillery fire, and at risk from the French cavalry. Still, we decided to call it a draw.

As a learning curve game it worked pretty well. Lindsay and Mally hadn’t played Black Powder before, and it had been a few years since Gyles’ last used the rules. All three of them picked things up really quickly though, and were soon rolling and judging ranges, factors and “to hit” chances like real pros. Despite not getting a result – and only really having 90 minutes of gaming time – everything rolled along quickly and smoothly. Indeed, I’d forgotten just how speedy and intuitive Black Powder can be. And for me, it gave me a chance to get my toys out. I’ve already vowed to build up my Allies in the coming year, so they can properly match my sizeable French army. It also re-affirmed my love for the sheer spectacle of this great period.