We rarely play the same period twice in a row, except when we’re trying to learn or re-acquaint ourselves with a set of rules. This was the case here. For last week’s 1866 game I forgot the playsheets listing the European amendments to the rules. So, we decided to run a similar game, only this time we were better prepared. In this Franco-Prussian War game, set near Mars-le-Tour in mid-August 1870, both sides were advancing towards the villages of Vionville and Renville, and the open ground in between. 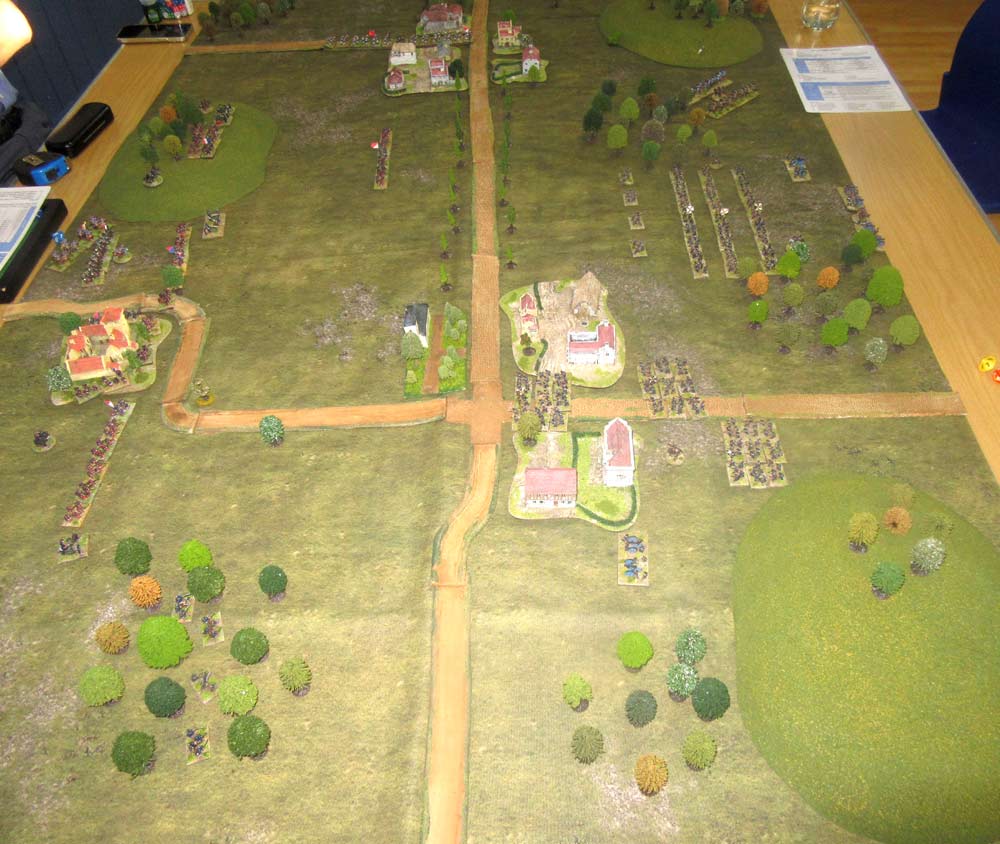 In this game, Sean played the Prussians again, commanding a weakened III Corps, with 2 Divisions each of three regiments (9 stands apiece), a jaeger battalion (4 skirmish stands), 8 artillery stands and a two-regiment brigade of cavalry (8 stands altogether). 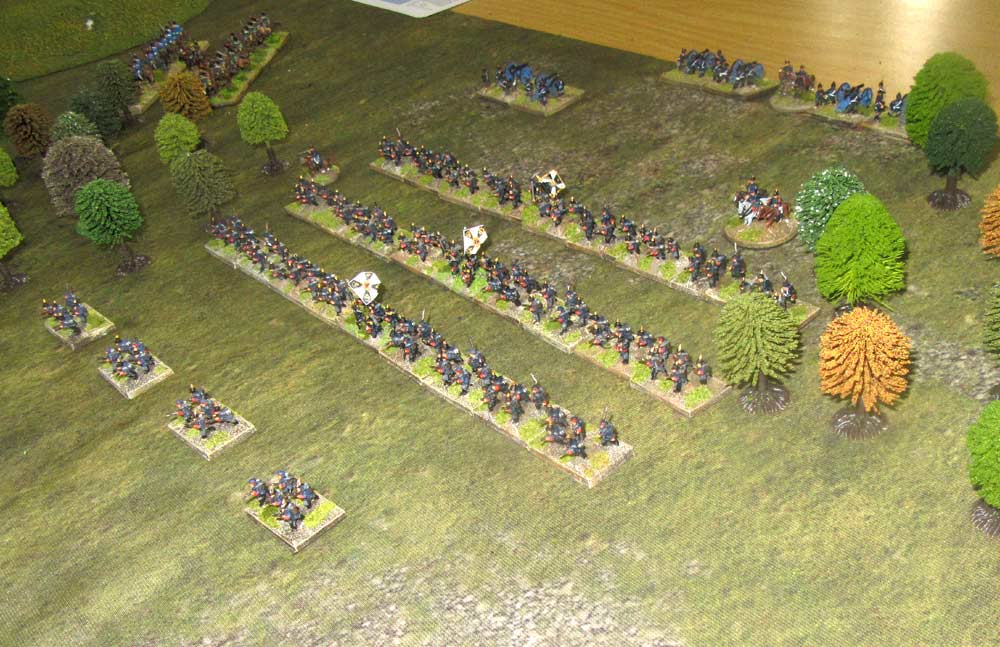 Nick I  took charge of the French, with a division apiece, drawn from 3rd Corps. Each of us had four infantry regiments (6 stands each) two gun stands and a mitrailleuse stand. The Corps reserve under Marshal Leboeuf contained  an  8-stand brigade of light cavalry, two gun stands and a chasseur battalion (4 skirmish stands).  As before, the game was played out on a 6×4 foot table.

We both headed for the villages, but the Germans were slow off the mark on their right, and so the French Montaudon Division got to Rezonville first – the village on the left in the photo above. The German 5th Division though, claimed Vionville, on the right. This photo by the way, is looking at the battlefield from the north, with Vionville to the east of Rezonville, and the Prussians advancing from the south. Nick also had two regiments out on a limb to the east of Rezonville, looking horribly unsupported and outnumbered.

This though, was part of his plan. My own troops from Neyral’s Division went prone in the open ground to the north of Vionville, and using the superior range of their Chassepot rifles began firing into the Prussian lines, supported by all the French field guns. We also released the light cavalry brigade to support Nick’s vulnerable-looking infantry. Actually, they weren’t so vulnerable after all – when the 20th Brandenburg Rgt. charged them, the 81st Ligne held them off, then withdrew behind their supports – the 95th Ligne. 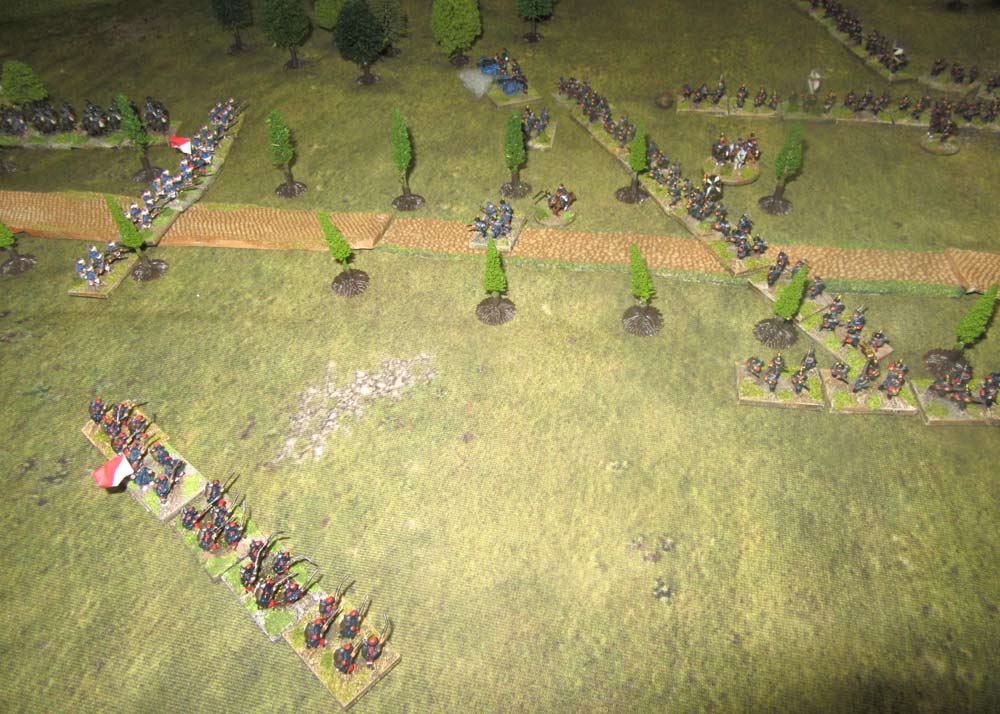 By then Nick’s other two regiments had advanced out of Rezonville, and were threatening the Prussian flank. Surprisingly Sean re-dressed his line to face off this threat, while manouevering his cavalry brigade to sweep down on Rezonville from the south. Instead, the fire poured into the Prussian Jaegers forced them to retire, while the now battered 20th Brandenburg were swept from the field. 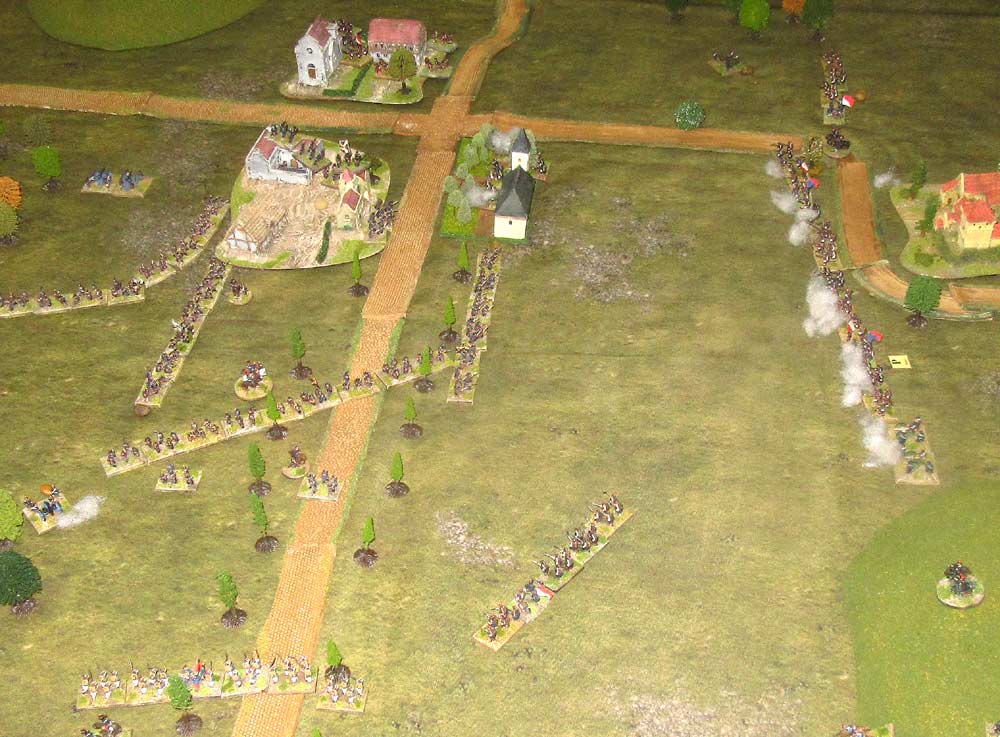 What really stymied Sean here was his artillery. His Corps guns – four stands of them – failed every manoeuvre roll he threw at them, and so for most of the game they remained limbered up, well to the south of the fighting. Instead he redressed his lines, pulling back a little, and moving some of 5th Division to the main crisis point to the west of Vionville. This allowed me to infiltrate a regiment of French line and my chasseur battalion into the north-east side of the village.

Then came what amounted to a deadly two turns for the Prussians. First off, my prone French firing line was repeatedly rolling well, causing casualties every time they fired. So, the 5th Division were being steadily whittled down. in Vionville (above) my jaegers around the church and the 19th Ligne in the eastern side of the village were now firmly ensconced, and Sean now lacked the manpower to drive them out. Over at Rezonville Nick’s mitrailleuse caused mayhem in the Prussian cavalry ranks, wiping out a regiment of dragoons and making the remaining hussars pull back . It was all going surprisingly well!

There were problems though. Half of my infantry refused to stand up after going prone, and another regiment plus my mitrailleuse, disordered earlier in the game, resolutely refused to rally. In Rezonville the French 51st Ligne (with Zouaves standing in for them) finally saw off the Prussian hussars, which disappointed their French counterparts, who were all ready to charge them!

By now it was looking decidedly messy in the open ground between the two villages. My prone firing line and the supporting guns had whittled down the Prussians until all Sean’s leading units were “worn” and disordered.  Over in Rezonville the French were pressing on the right end of the dog-legged Prussian line. Sean’s guns were still moving up, but by now it looked like the fight was coming to them. 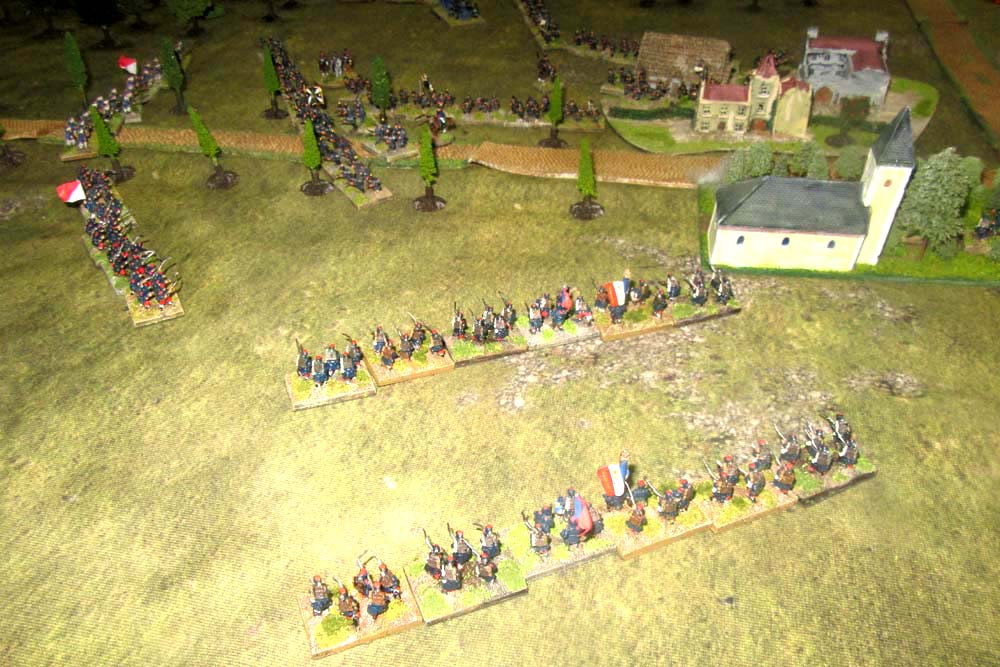 My prone troops had finally agreed to advance, thanks to the personal cajoling of Marshal Leboeuf. Nick;s division on their right was doing the same, and the Prussians were being pushed into an untidy huddle to the south-west of Vionville. So, Sean bowed to the inevitable and ordered his Corps to withdraw. He’d clearly suffered an unexpected defeat, but if his guns had reached the front line then things might have turned out completely differently. We all thoroughly enjoyed the game though, and couldn’t recommend Fire & Fury more for this period. The rules incidentally are the old brigade-level ones, augmented by a few European amendments. 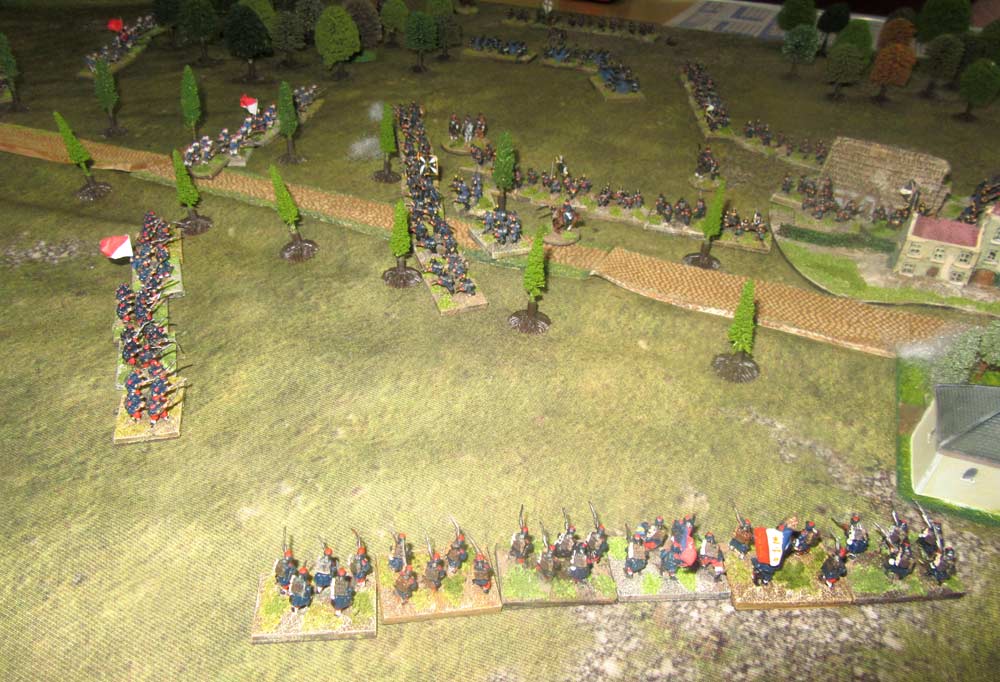 One Response “The Battle of Vionville, 1870”