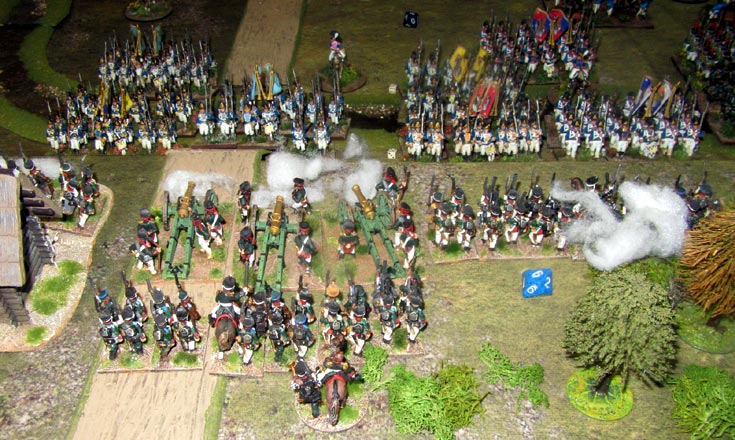 The real Battle of Valutino-Gora (or Loubino) took place a few miles to the north-east of Smolensk in August 1812. The Russians had evacuated Smolensk, but because the French blocked the main road to Moscow they pulled out using country roads to the north of the city, which eventually looped round to join the main Smolensk-Moscow highway. To stop the French from cutting them off, the Russians placed a blocking force astride the highway near Loubino, to cover the retreat of the army. Ney’s III Corps had the task of driving them back, seizing the road junction, and so cutting off the whole Russian army. That’s where our game kicked in.

The Russians held a ridge above the Stragan stream, while behind it, across the Samili stream lay the village of Loubino. that was where the Russian army were moving through, and ultimately it was the French objective. I say French, but for this game we changed things around a bit. Campbell has spent years painting up a Wurttemberg army, and while they were present at the battle, they were held in reserve. We simply switched them with a French division, so they were in the front and centre of the fight.

We picked up the action late in the evening, after the initial French assaults. So, on the northern part of the ridge (on the Russian right) there were the remains of two battered divisions – one Russian and the other French, they’d fought each other to a standstill. So now it was up to the Germans to save the day. All they had to do was to seize the ridge and break through. Once that was done Murat’s cavalry and the rest of Ney’s III Corps would pour through the gap, and fall on the straggling Russian army behind Loubino.

We fought the game on an 8×6 foot table, with Peter and I commanding the Russians, and Bart and Campbell the Wurttembergers. They had 12 battalions, including two jaeger ones, five regiments of cavalry (above), and no fewer than four gun batteries. Massed together (much to Campbell’s delight) it looked like plenty. For our  guys we had eight battalions, in two brigades, plus two cavalry regiments, three gun batteries and a sotnia (regiment)of Cossacks. In reserve were another two regiments of lancers, a sotnia of Cossacks and a gun battery, placed far back to defend Loubino. Effectively it was a much scaled down version of the real battle – or rather its later stages.

It began with Campbell launching his infantry in an all-out attack on the ridge. He avoided the Russian position battery, but attacked everywhere else. At the same time Bart unleashed his cavalry, splashing across the stream and up onto the ridge at the southern end of the Russian line. There the Leib chevaulegers met the hussars of the Marioupol regiment, and after a hard-fought tussle both sides had to retire. meanwhile the attached battery of horse artillery pounded away, until a unit of jaegers appeared, and they and the guns began a duel.

Back on the main ridge the first Wurttemberg wave was thrown back after some hard fighting all along the line. Two of the German infantry battalions were routed, but the Russians, bloodied but unbowed, held firm. The same situation repeated itself in the cavalry battle to the south. this time Bart threw his Wurttemberg dragoons into line, and charged, only to be bounced back by the second unit of Russian hussars. This though, was only the start. The two Wurttemberg players were determined to push through.

Bart tried sneaking an artillery battery onto the ridge, between a small hamlet defended by Russian jaegers and a small wood. His limbered guns got caught by enfilading fore from the buildings, and then fire from a Russian square to their front. They survived this, and unlimbered in canister range, only to get rolled up by a Russian attack column, which had been lurking behind the hamlet.

Things weren’t all going the Russian way though. On the left of the Wurttemberg line another jaeger battalion made it onto the ridge, and then rolled up a Russian 6-pounder battery, helped out by a simultaneous frontal attack from further down the slope. The guns were lost, but a Russian counter-attack stopped the Wurttemburgers from exploiting their success. They managed to get their own guns onto the ridge, protected by an infantry unit, but now the Russians had the momentum, and after a tussle they pushed them back down the slope.

Bart tried one last attack, but once again he was thwarted, this time by the Russian lancers of the Polish regiment. Meanwhile the horse battery had seen off the jaegers, and on the southern side of the ridge at least, the Russian position seemed secure. Both sides had some pretty beaten-up cavalry units now, but the Germans had lost two cavalry regiments, and were no closer to driving the Russian cavalry off the ridge than when they’s started their assault.

The same was pretty much true on the main part of the battlefield. The Russians had held, and by destroying four Wurttemberg infantry battalions they had evened the odds against them from 3:2 to to 1:1. They had a toehold – a battalion of light infantry was clinging to the ridge, but elsewhere the Wurttembergers were still milling around along the line of the Sagan stream. The real threat to them were the Russian 12-pounders of the position battery, to the north of the little hamlet, astride the Smolensk to Moscow road. They proved to be something of a death star, and kept the Germans at bay throughout the game. So, we called it a day. The Russians had lost one battery, and the Wurttembergers four battalions, two cavalry regiments and a battery. They also never drove the Russians from the ridge. So, it was a clear Russian victory, achieved largely by Peter’s tenacity. He obviously enjoyed himself, but I’m not so sure Bart and Campbell did – at least not quite so much!