When we decided on an English Civil War game this week, we reprised our fictitious little campaign nest in South Yorkshire. In it, the Royalist Earl of Doncaster (played by Sean) is locked in tabletop combat with my guy, the Earl of Rotherham. This week, Sean and  “Sean 2” were both paying the Royalists, leaving me to hold them off with my Parliamentarians. Sean 2 hadn’t played “For King & Parliament” before, so we kept it fairly simple –  fairly small forces, and no artillery, dragoons or commanded shot. 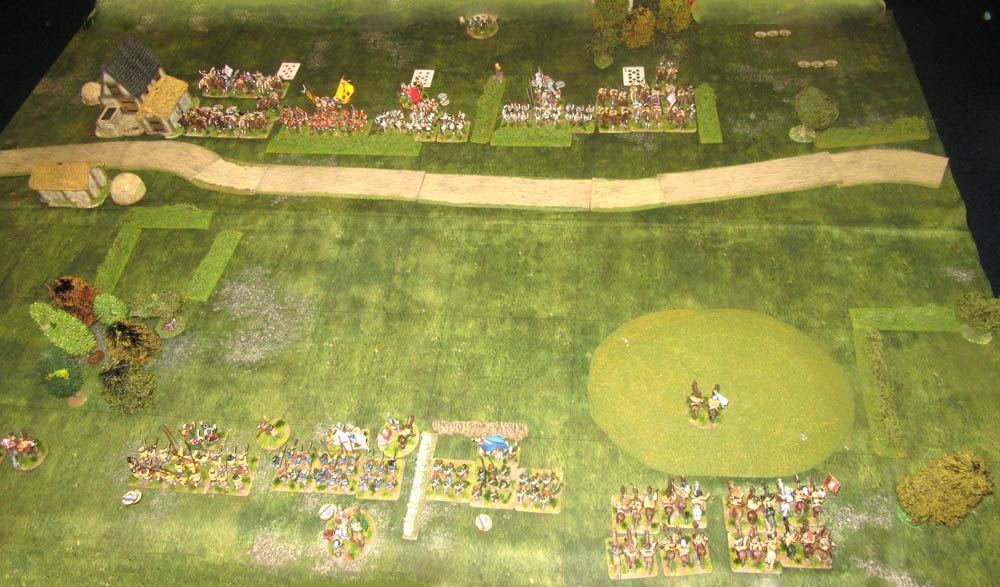 We both had three regiments of foot (one on each side being “raw”, as this was early in the war). The Royalists had four regiments of horse, while the Parliamentarians only had three, as theirs were larger. One cavalry regiment on each side was raw too. The battlefield itself was fairly nondescript – the village of Tickhill, a hill and some hedges and fields. We played on a 6×4 foot table. 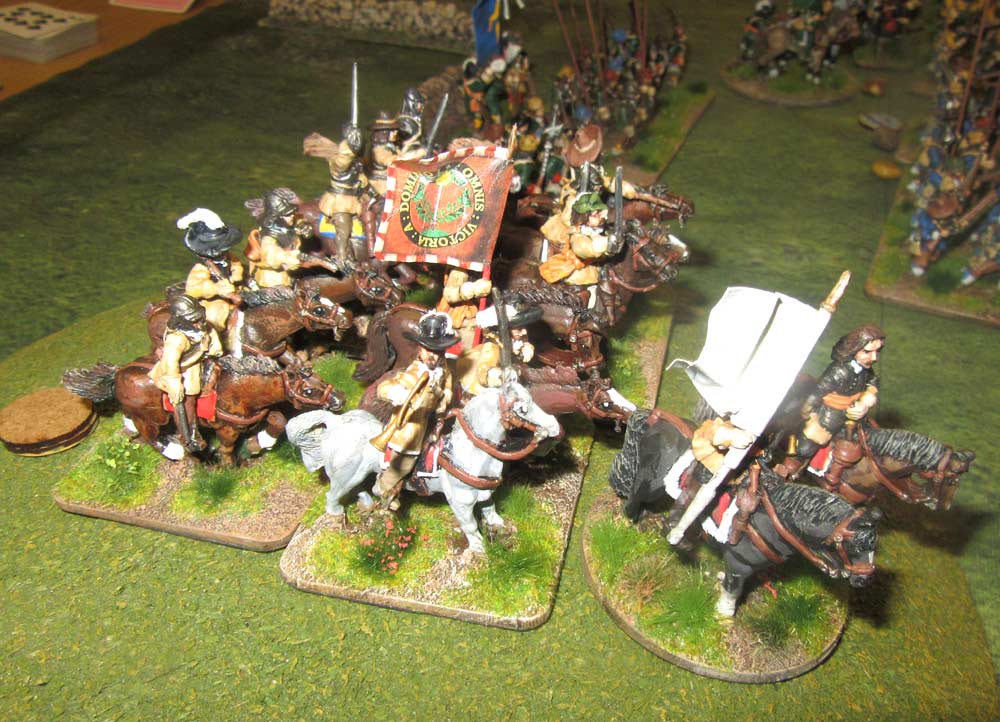 In For King & Parliament there are no dice or tape measures – just barely-seen squares on the tabletop, and decks of playing cards.  So, after explaining the basics of the novel system to Sean 2, we got the game underway. Sean 1 decided to play it cautiously to start with, and advanced as far as the hedgerows lining the Rotherham road, and halted. However, Sean 2 had Barraclough’s regiment of foot advanc on their left wing, supported by two regiments of Royalist horse. That was going to be trouble. 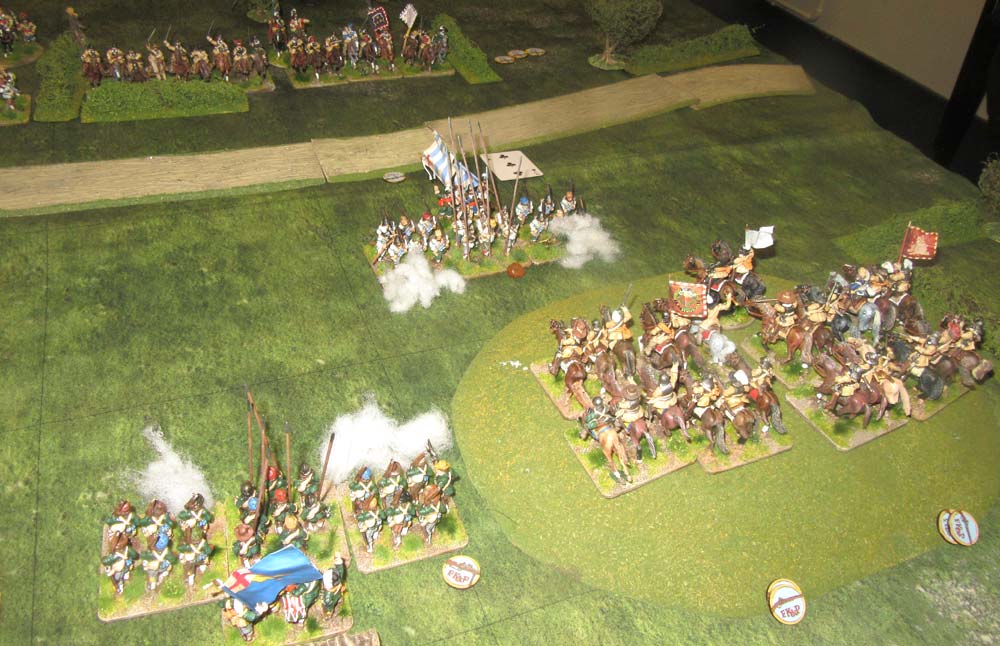 The Parliamentarians countered by advancing through the open fields to the south of the road, but for now they kept out of musket range (two 20cm squares). My horse though, took up position on the small hill on my right flank, and again I supported them with my right-hand regiment of foot. Barraclough’s responded by firing at my waiting cavalry. This was definitely going to be trouble! 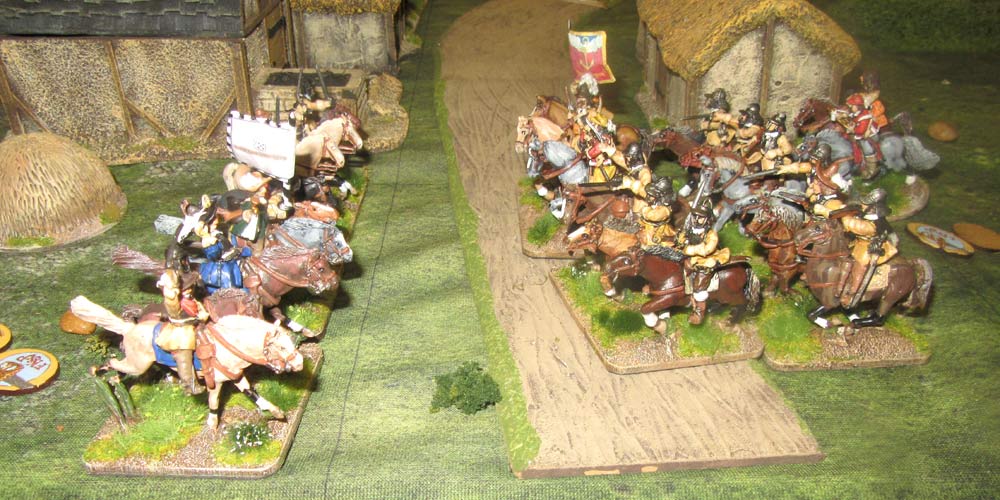 Meanwhile, on the Parliamentarian right I advanced my one cavalry regiment there as far as the southern outskirts of Tickhill, and waited. Sure enough, Sean’s own horse began threading their way through the village, and despite being constricted by the buildings they charged me. In the brief melee that followed both Royalist regiments were disordered, as were mine, and so everyone pulled back to reform. Meanwhile, the real fighting was kicking off on the other side of the battlefield. 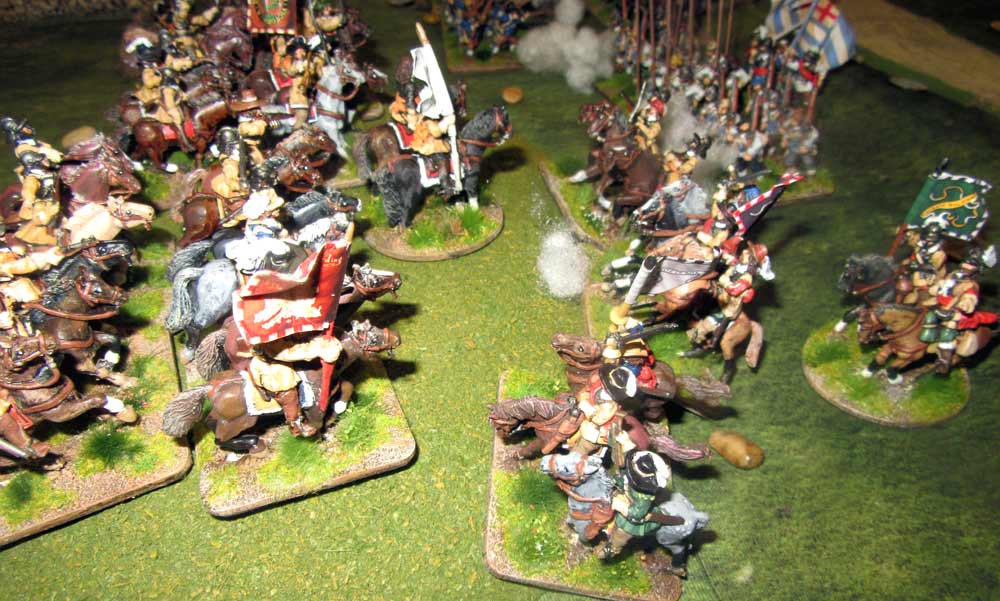 Having grown tired of being shot at, one of my cavalry units, Arkwright’s horse, fired their pistols at Barraclough’s foot then charged home. Not surprisingly they were bounced, but now both sides were disordered. Then, Sean 2 charged my second cavalry regiment, Thackrey’s, with Greenwood’s regiment of Royalist  horse. I couldn’t countercharge, and my pistol fire was futile. So, I was pushed back off the hill. In the next phase, my regiment of raw Parliamentarian cavalry were swept from the field. 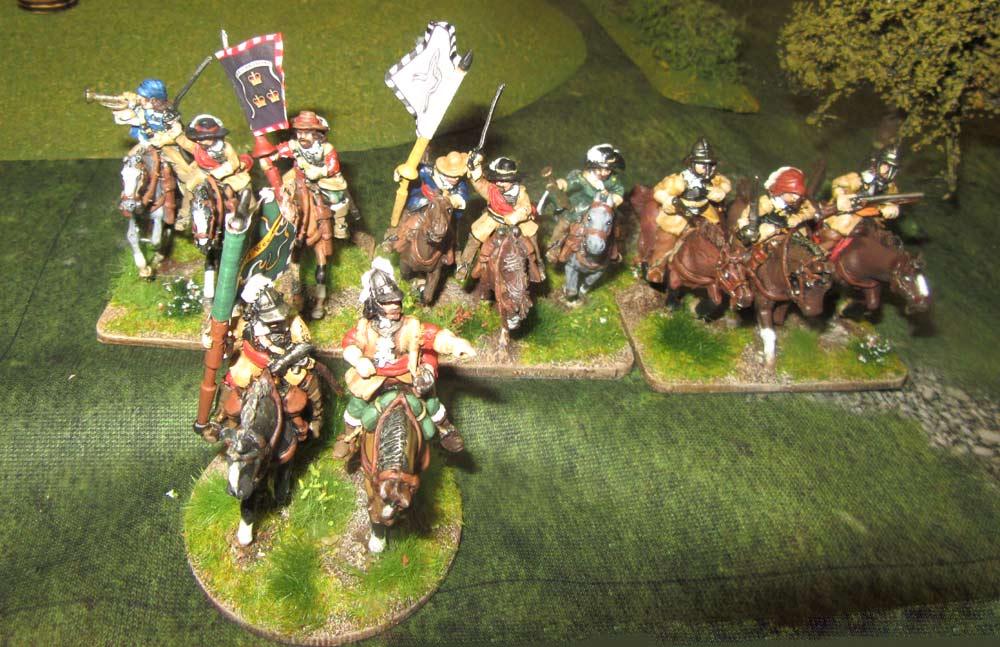 That wasn’t all bad though. Greenwoods horse had to pursue, so they headed off the table edge, taking their commander Sir Edward Greenwood with them. Sean 2 though, now had the bit between his teeth, and when I moved up Rotherham’s foot to shoot up Barraclough’s Royalist foot, he launched his cavalry – Barraclough’s regiment of horse – in a charge against them. 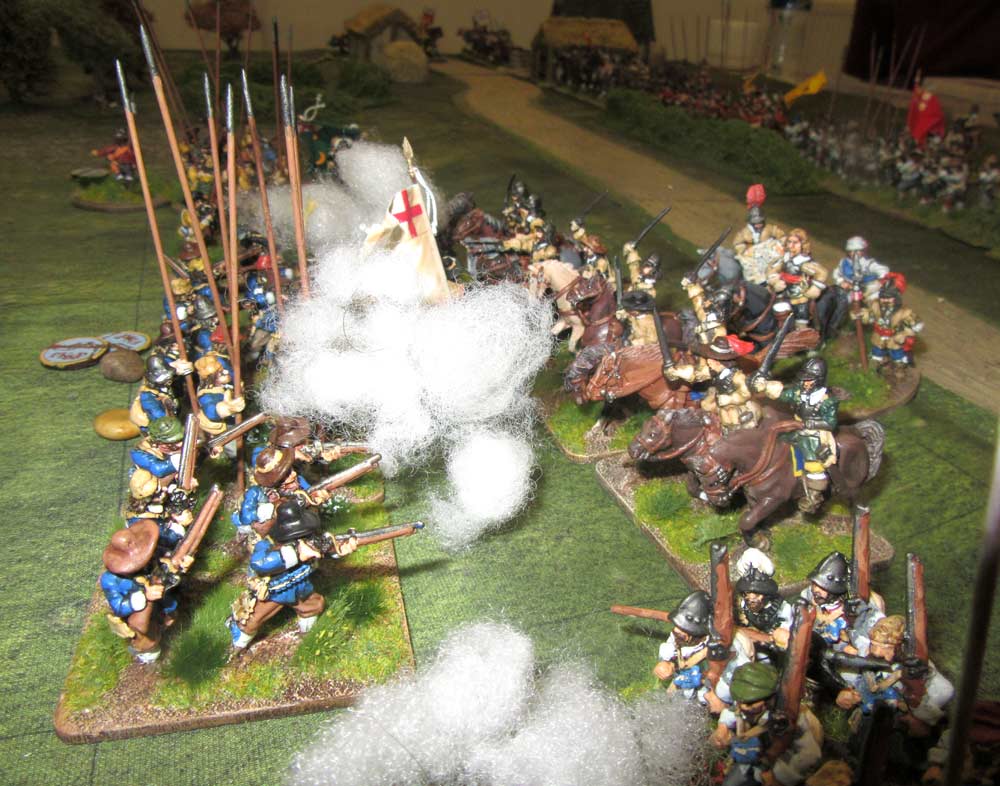 This though, didn’t end well. First of all, they were hit by a determined volley and disordered. Then, they were fired on again, and Rotherham’s were supported by the Scunthorpe Trained Bands next to them. The result was, Barraclough’s horse were shot to pieces. This though, was only the start. Barraclough’s foot had to take a morale test, and as they already had two hits they were vulnerable. Inevitably, they also broke and ran. So far, the two Seans had lost two units, while my Parliamentarians had lost one. 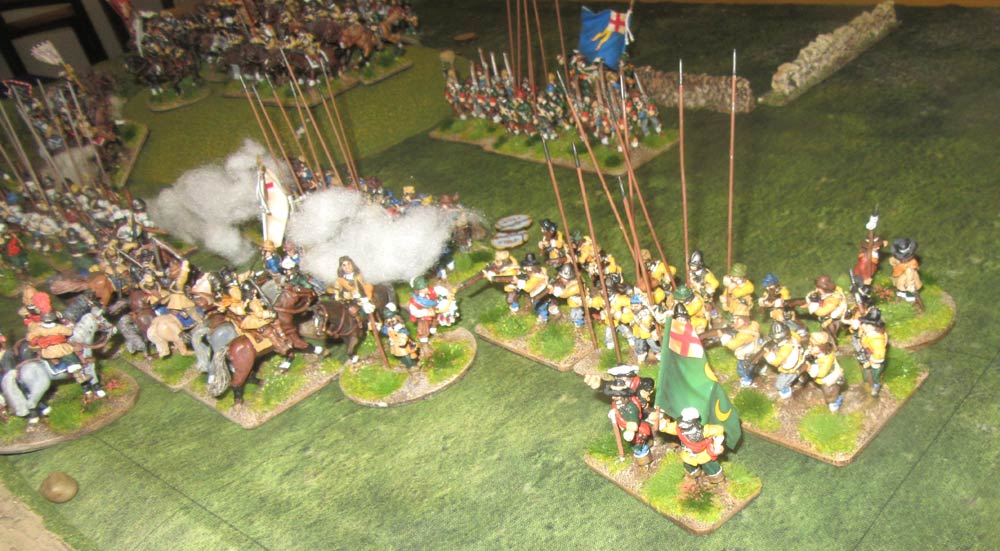 So, it was time to press home the attack. I advanced within musket range, and then surprisingly the remaining Royalist foot came out from behind their hedges to close the range, and fired back. We were now locked in an intense musketry duel in the centre of the table, which ended with just about everyone low on ammunition, and with units on both sides disordered – some with two hits. 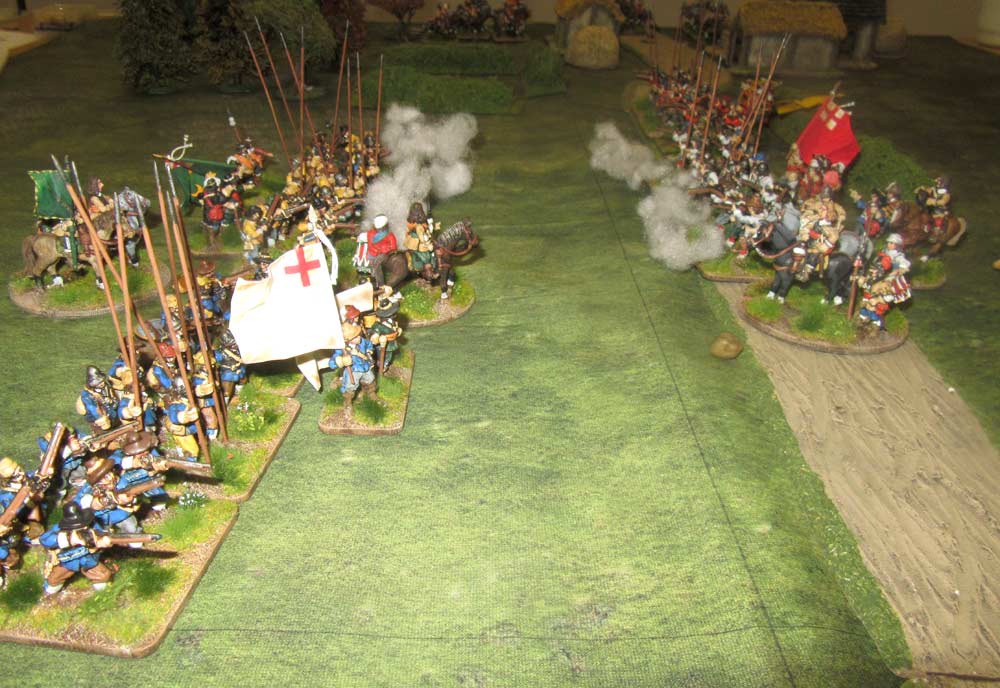 Meanwhile, on the Parliamentarian left, Colonel Harrison’s horse were still holding off those two Royalist cavalry regiments – Hartley’s and Longfellow’s, but despite another clash both sides were too weak to gain any real advantage. Here, terrain was in my favour, as the two Royalist regiments didn’t have room to deploy, thanks to the village. So, the battle was turning into a stalemate, with both sides having fought each other to a standstill on one flank and in the centre. I suppose it all depended on when Sir Edward Greenwood would reappear. Still, I still had a spare cavalry regiment to counter him when he did show up. 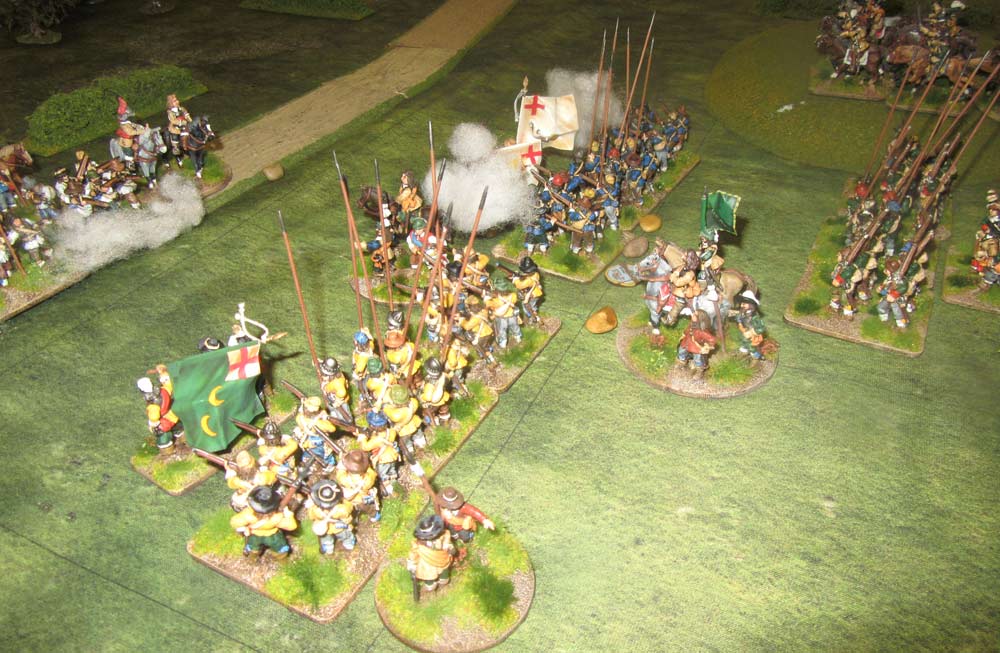 So, we decided to call a halt to the game After all, we wanted to get home, and we didn’t really know when Sean 2 would pull the cards he needed to get Greenwood back into the game. So, the battle was duly declared a draw, albeit one where Parliament won on points (5 victory medals to 3).  The main thing is, Sean 2 enjoyed himself, and was keen enough to declare he’ll come back for more next week. As ever, the FK&P rules were fun to play, and produced a very entertaining as well as a fairly realistic game. 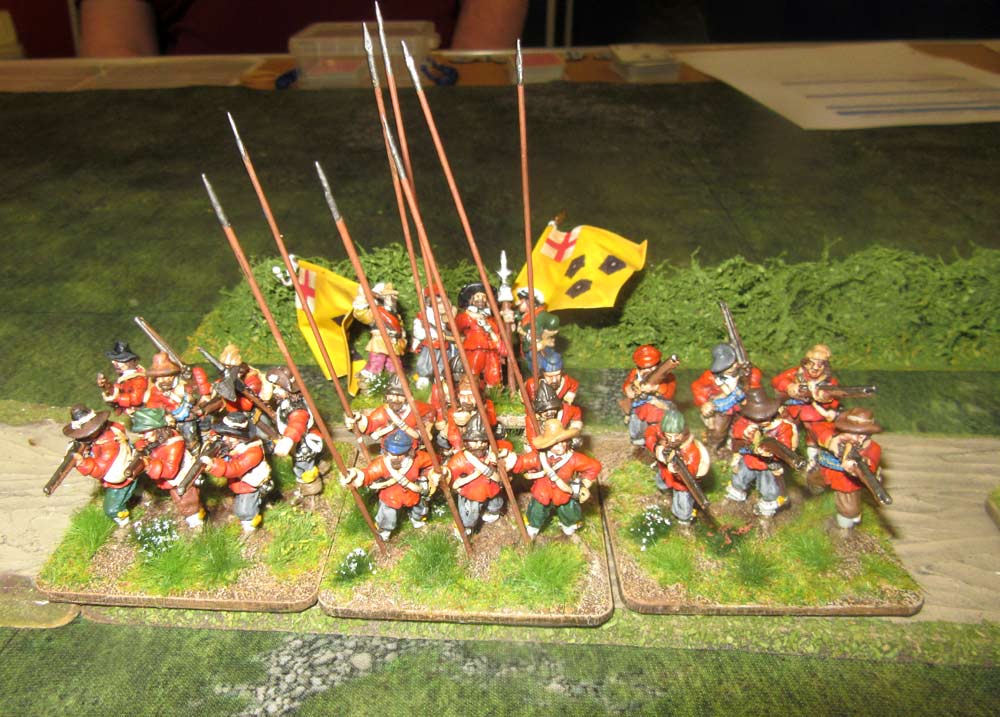