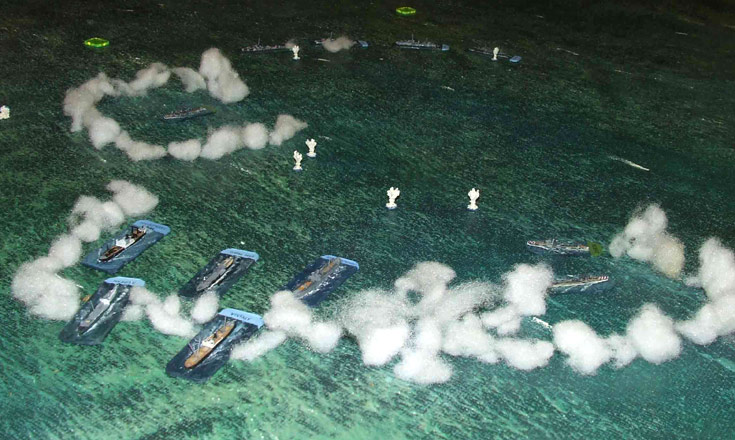 A planned French Revolutionary War game didn’t happen because the French commander was feeling poorly, so instead Dougie and I played a quick Second World War naval game – a clash of destroyers. The real battle of the Kerkennah Bank (aka “The Battle of the Buoys) was fought off the north-eastern corner of Tunisia, close to the well-marked patch of sandbars that gave this little battle its two names. An Axis convoy was heading to Tripoli, laden with troops, equipment and ammunition for Rommel’s 15th Panzer Division. Sinking the convoy would inflict a serious blow to the Afrika Korps. The British sent Captain Mack’s 14th Destroyer Flotilla based in Malta to intercept it, and the two forces made contact just before 2am on 16th April 1941. The aim of the Axis player was to get the bulk of his convoy to safety, even if it meant sacrificing his three Italian destroyers in the process.

The battle began with both sides opening up on each other, and scoring minor hits. The four British destroyers circled around the convoy to the west, shepherding it away from the shallows towards the open sea. The outnumbered and out-gunned Italian destroyers laid smoke, trying to cover the convoy which turned away from the threat. That was when the Italian destroyer Baleno fired a salvo of six torpedoes, one of which hit the bow of the third destroyer in the British line – HMS Nubian. She went down within minutes, while her companions forged ahead – Mohawk taking on the Baleno, while Jervis and Janus engaged the Tarigo and Lampo. Until now the British fire had been hindered by the smoke laid by the Italian destroyers, but the Lampo presented a perfect target, and the British mortally wounded her.

While all this was going on the two Italian destroyers fired their torpedoes, but the fast-moving British destroyers managed to avoid them, and cut through the line of smoke to engage the enemy at point-blank range. That was the point when Dougie, playing the Italians all but threw in the towel. The British could manually load their guns for brief periods – consequently there’s a “rapid fire” rule that all but guaranteed that they would eviscerate their slower-firing opponents. That was exactly what happened, with the Italian destroyers scoring one hit to three or four scored by the British.

Within minutes the Lampo was dead in the water, the Tarigo was flooding and the Baleno had her guns knocked out. It was all over bar the shouting. We spared the Italian player having to fight it out to the end, as it had become a turkey shoot. With the escorts dealt with, the British could then destroy that all-important convoy at their leisure. Those 300 Nazi vehicles would never reached Rommel.

Strangely enough, the course of our game mirrored the real battle. In the actual engagement the Italians were torn apart, but before they were sunk the Italians managed to fire torpedoes that hit and sank the Mohawk. The Tribal Class destroyer that came a cropper might have been different, but the outcome was the same – three destroyers and a convoy of five merchantmen, in exchange for a British destroyer.

Sure, this scenario was prettily heavily weighted in favour of the British. The Italians would have to be pretty lucky to survive, especially given the slight British advantage in destroyer numbers, and their superior gunnery and night-fighting capabilities. However, Dougie blamed the rules – the torpedo rules to be precise. He might have a point. In General Quarters 3 its now pretty difficult to hit anything with a torpedo, as it all depends on the torpedo track crossing the position of the target at the end of its move. Dougie argued that there should have been some chance of hitting if the torpedo track crossed the ship’s path at any point – a method used in other older rules. Even the original General Quarters had a system where hitting was easier, and for our next game we may go back to that old, well-proven method.

Of course, Dougie didn’t complain when he scored a hit on Mohawk! Then the system seemed to work just fine! Perhaps the problem lies with his second-rate navy, which never seems to win a game…