We had something of a change of scale this week. Newcomer Bob had just bought a copy of the new 3rd edition of Piquet’ – Field of Battle. So, we decided to try them out. Now, I’ve used these rules a few times before, but only with 10mm figures, and for games set in the Austro-Prussian War of 1866. So, as Bob didn’t have any suitable toys, we decided to try the rules out using my Franco-Prussian kit. 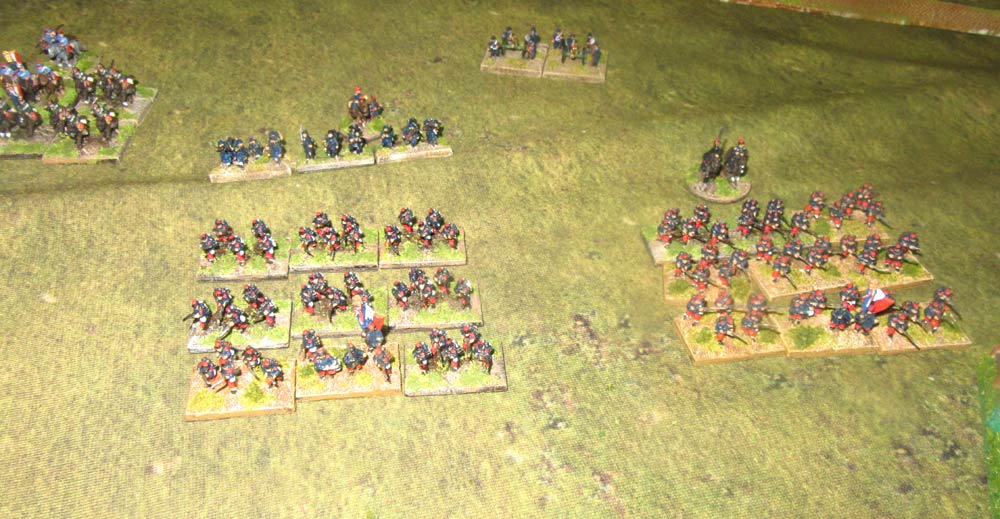 This is actually the only land period I don’t game in 28mm. So, it represented something of a change. This particular game was set amid the frontier battles of  August 1870. For this one Bob umpired, Gyles and I commanded the Prussians, while Mally and Sean opted for the French. We played it out on a 6×4 foot table, which, as this was a divisional-sized game, meant there was plenty of room on the table. 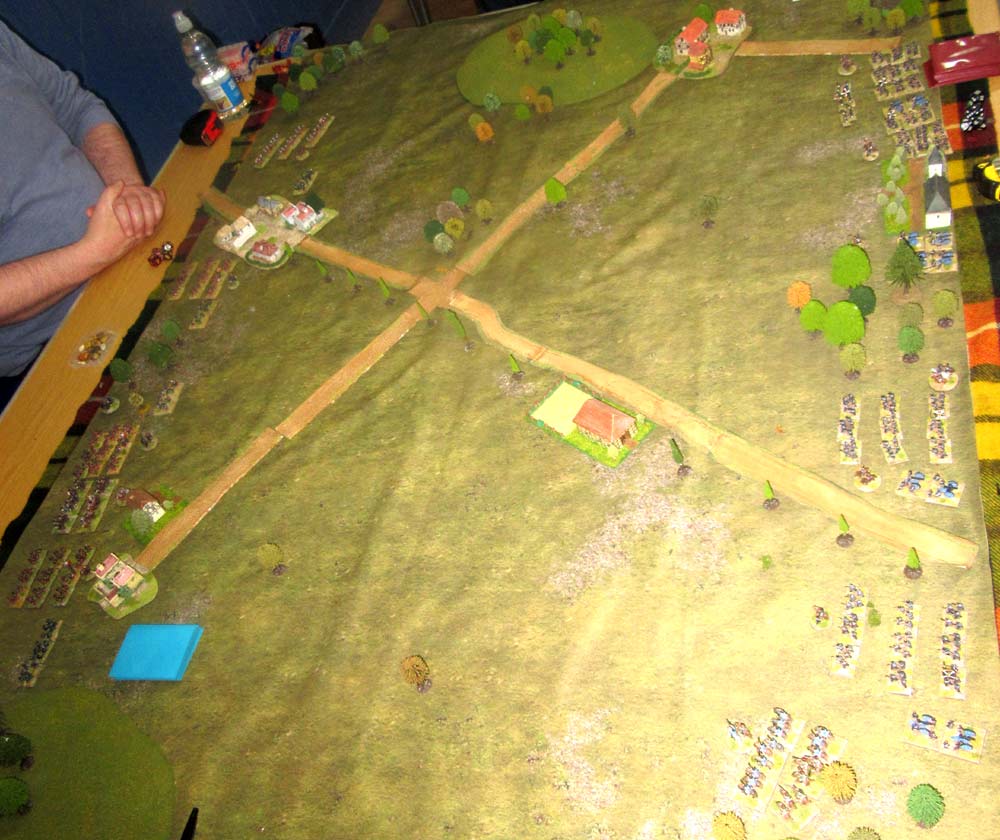 The battlefield itself was fairly open – just a few scattered farms, villages and woods to break up the landscape, plus two small wooded hills.  We’d already rolled up the stats for the forces, and apportioned out the commands. Essentially both sides had 12 infantry battalions, plus a two regiment brigade of cavalry, while the French had just three batteries (one being a Mitrailleuse machine gun one), while the Prussians had seven batteries in all. Then again, the French had the better rifle, so it sort of balanced out. 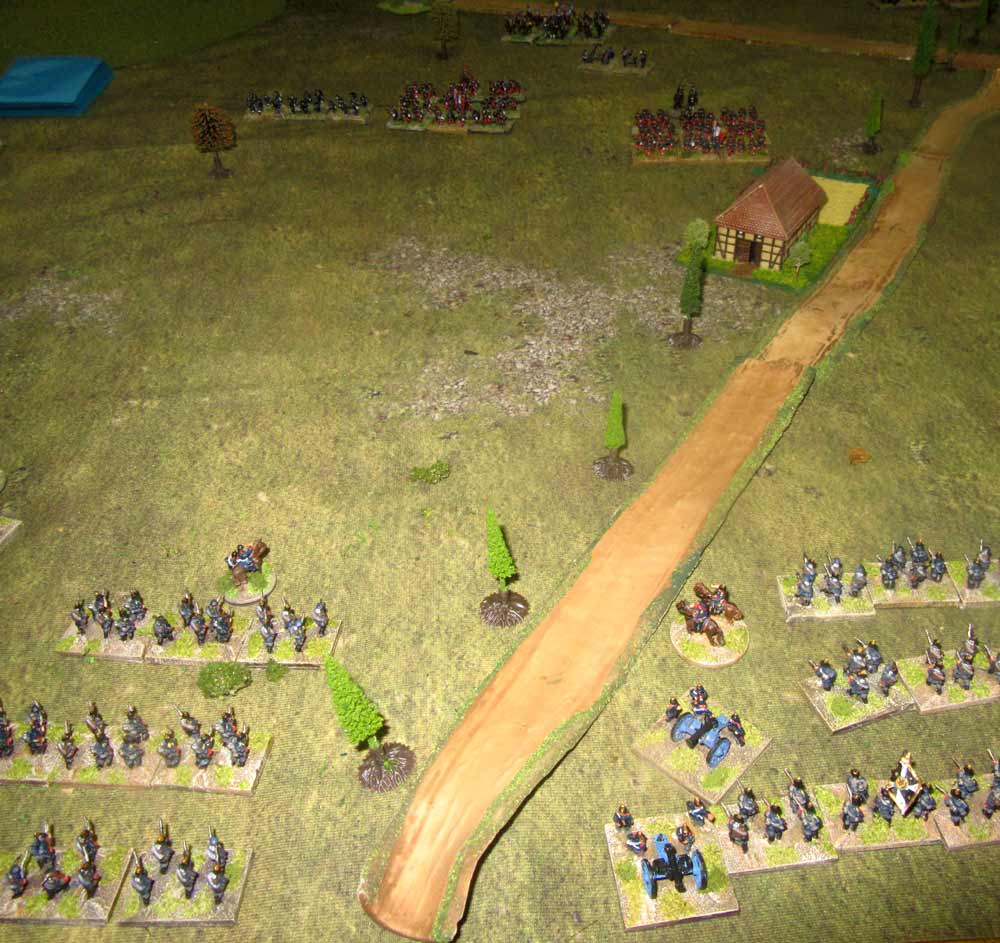 The French won the initiative and began advancing. The Prussians held back, mainly due to a lack of “Move” cards, but eventually we managed to form some semblance of the line when the French were almost upon us. I commanded the Prussian left, while Gyles took the right, backed up by the Corps artillery. For my part I had the Prussians dragoon brigade, which I decided to throw into battle, more to test out the rules than anything else. Besides, the French chasseur battalion on Mally’s right looked like a juicy target. 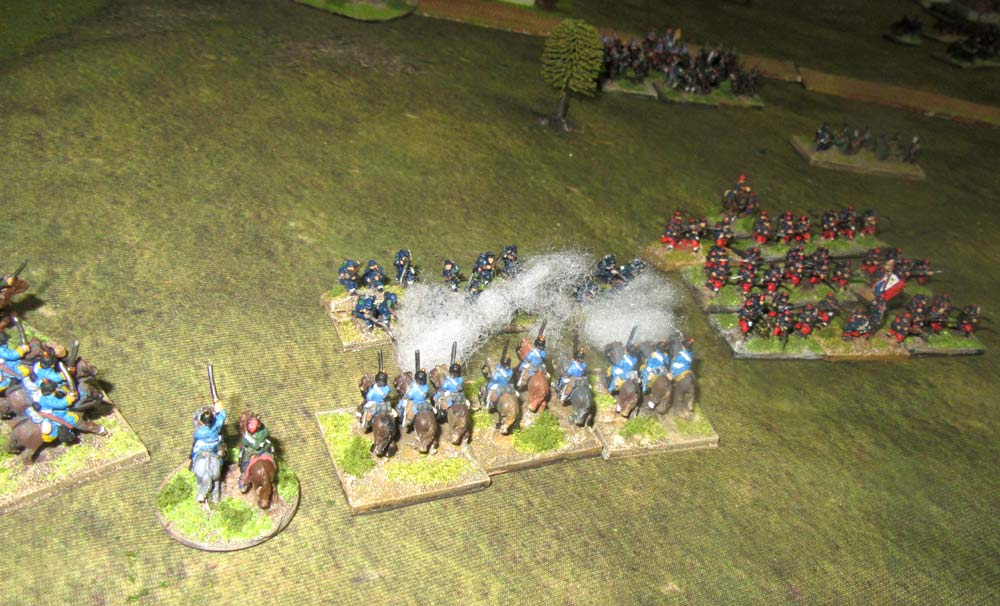 It wasn’t. I forgot about their Chassepot rifles. My dragoons pretty much got blown from their saddles by opportunity fire, and the survivors routed. Doubling down I threw in my hussars, who were now on the flank of the chasseurs. I charged home, but Mally rolled superbly, I didn’t, and although both sides had to retire, my cavalry brigade was well and truly spent! So, first blood to the French. 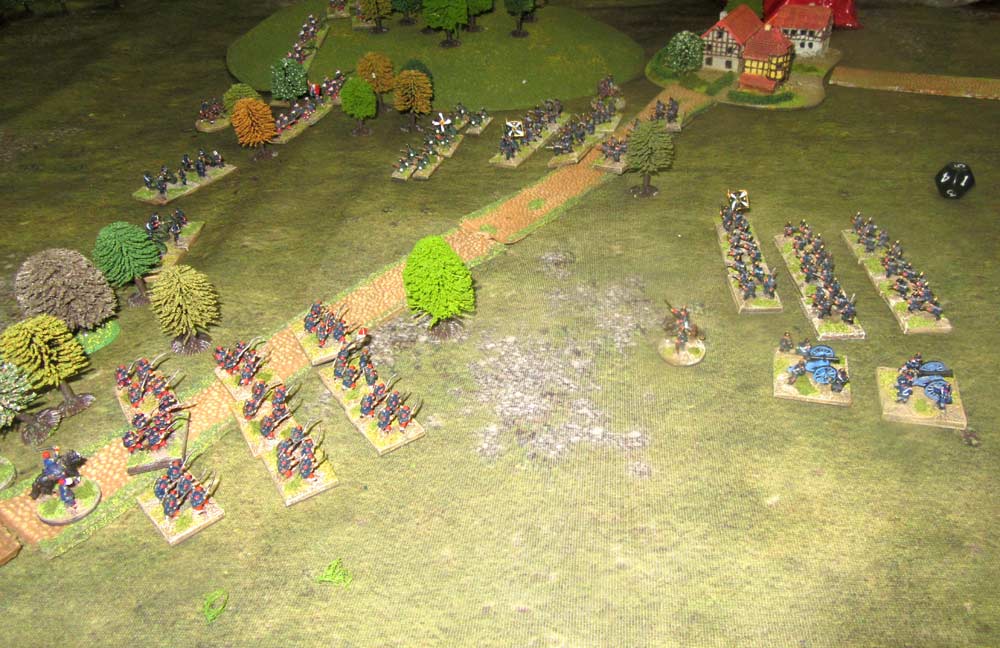 Over on the Prussian right the French had deployed their guns between a wooded hill and another small wood. Sean’s Turcos climbed the hill to secure their left flank, while the rest of his French infantry advanced steadily on Gyles’ Prussians. The French advance had been so rapid that Gyles hadn’t even had a chance to deploy his guns – and the French were bearing down on him. 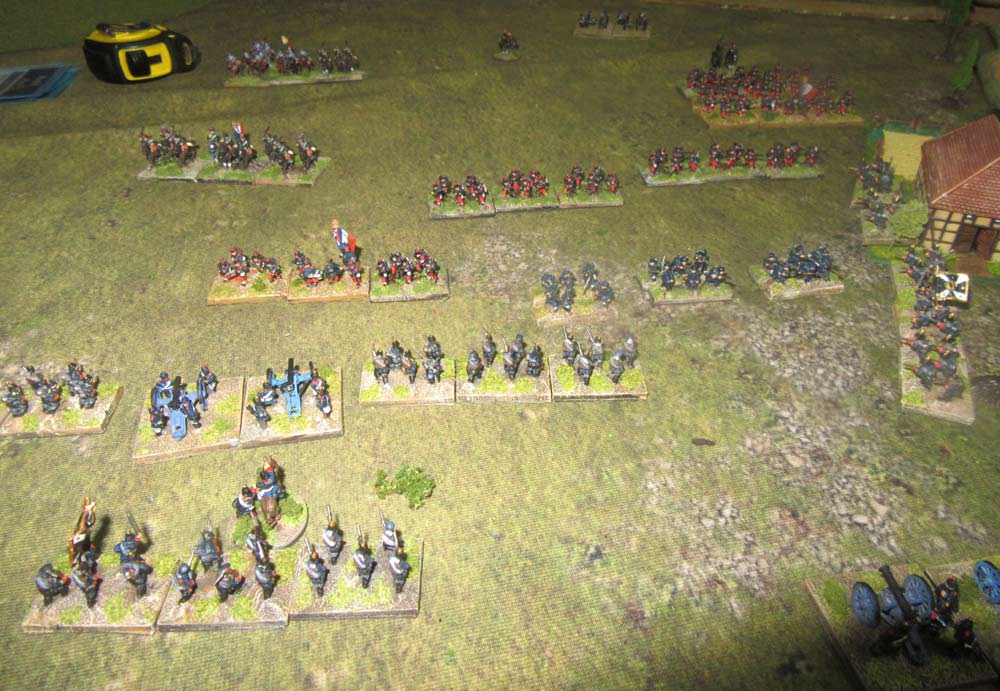 This run of cards though, wasn’t going to last. Eventually a Prussian “Move” card turned up, and while Gyles deployed his guns, I shook my infantry out into some semblance of a supported line. I anchored my right on a barn, which I occupied, and which duly attracted the attention of just about every Frenchman with a rifle. The small garrison held on though, and eventually my own guns began chopping holes in the waves of French infantry to my front. 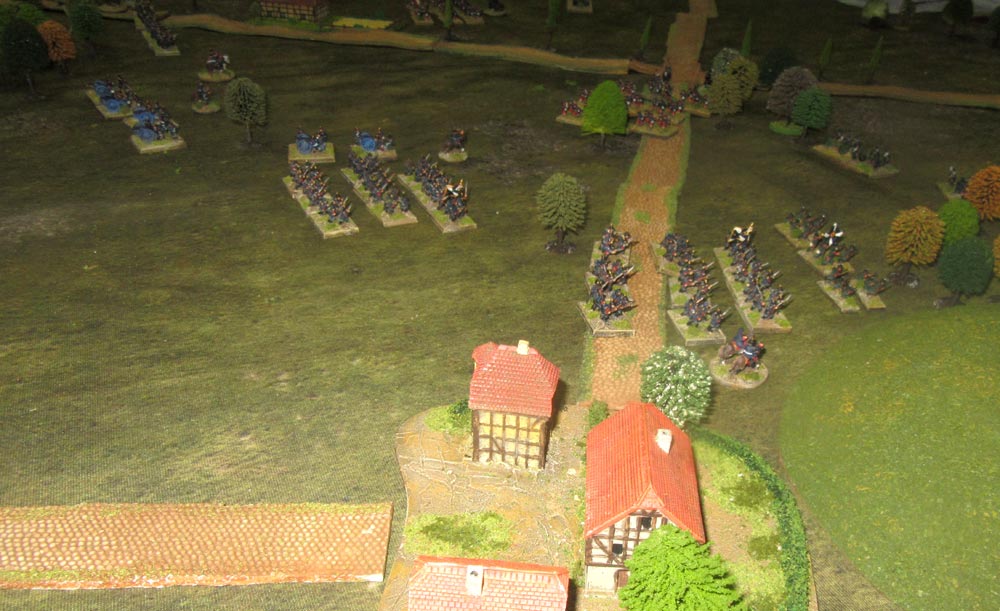 Gyles was having a better time of it too. His own guns had finally got into action, and in two phases managed to silence a French gun battery and his machine guns. The Prussian infantry though, were under a lot of Pressure there, and casualties were mounting, especially on Gyles left, where his regiment there was the target of two regiments of French. Still, he was holding on tenaciously. 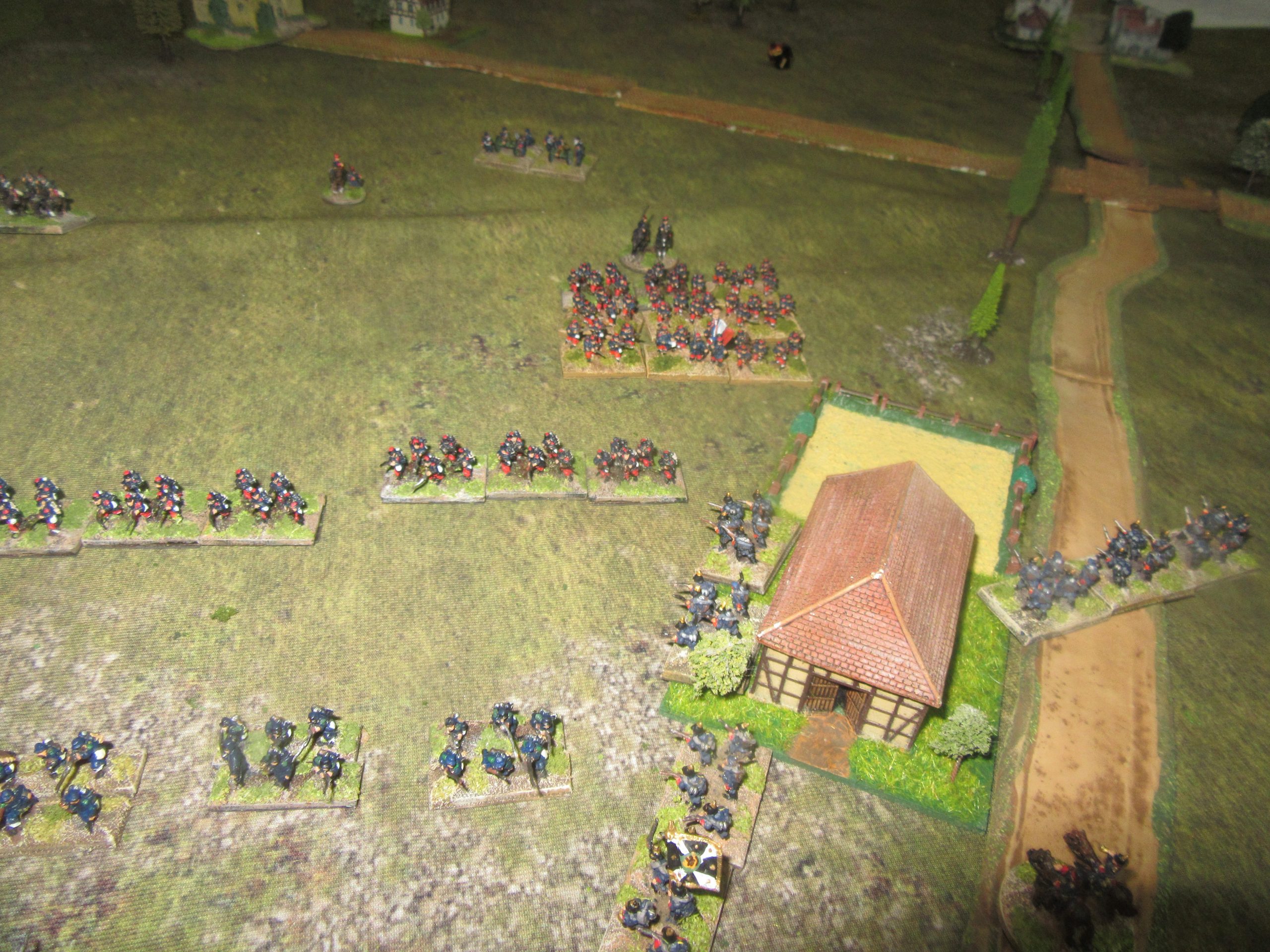 So far it had been a pretty see-saw battle. The French advance against the Prussian left though, was running out of steam. The leading unit of Mally’s first regiment was forced to retire, as were the Chasseurs, thanks to a some well-placed close-range volleys. then a battalion behind broke and ran thanks to an even better roll from the guys in the barn. Mally still had his cavalry though, and another whole regiment, still bunched up in three close-packed lines, was preparing to assault the barn. However, the cards he wanted never came – largely thanks to that big run of “Move” cards earlier in the evening. So, his attack fizzled out. 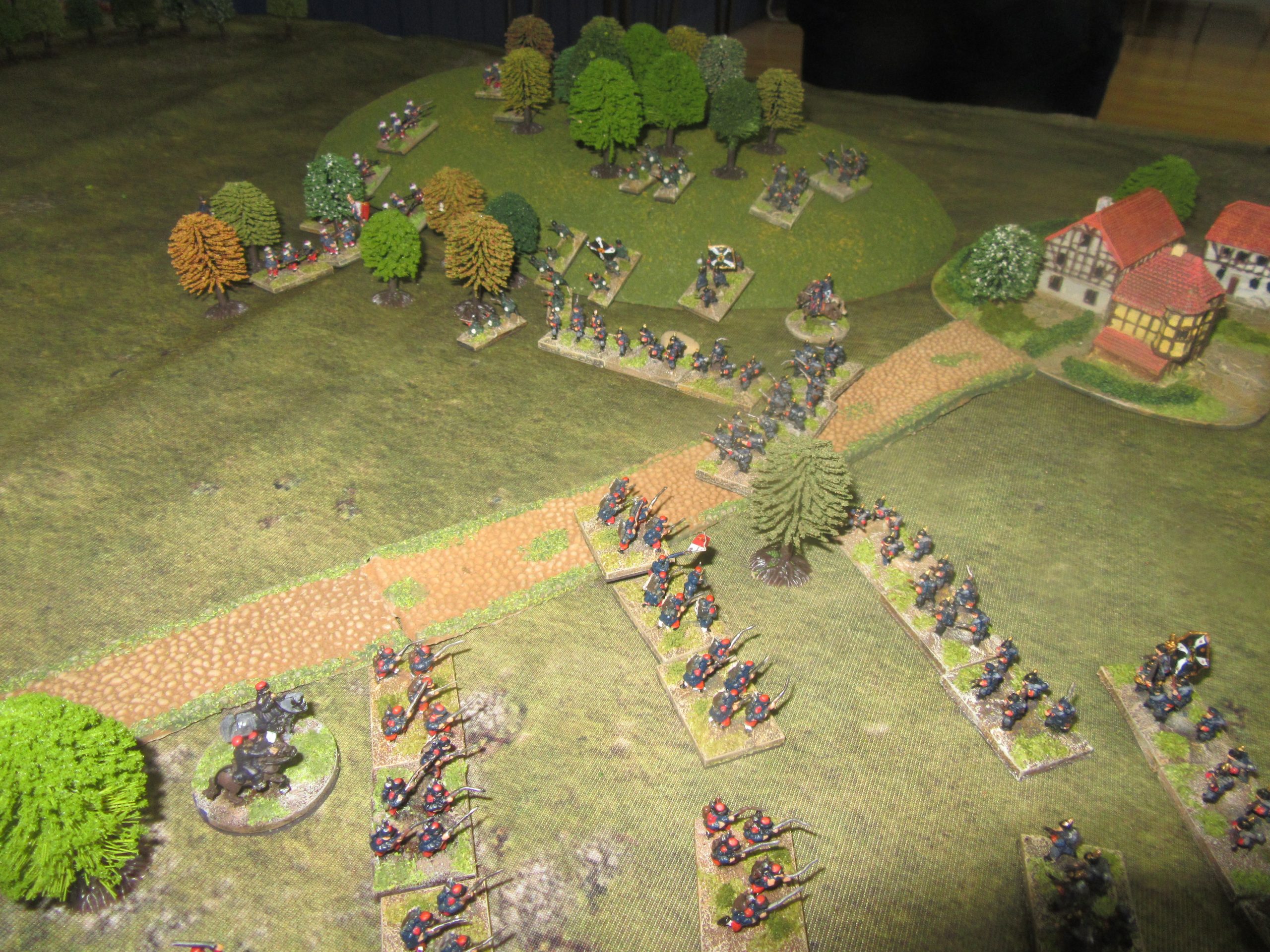 Over on the other side of the table the French were doing better, driving back two Prussian battalions. Still, it wasn’t enough to turn into a winning hand, largely thanks to a couple of “Artillery Fire” cards, which Gyles used to pound the French infantry massing for the knock-out blow. Once again, the French attack fizzled out due to a lack of “Movement cards, and the chance of victory was lost. Only the Turcos seemed to do well over there, shooting up the Prussian Jaegers and driving them out of the woods. It wasn’t enough though, to turn the tide, which was now flowing towards the Prussians. 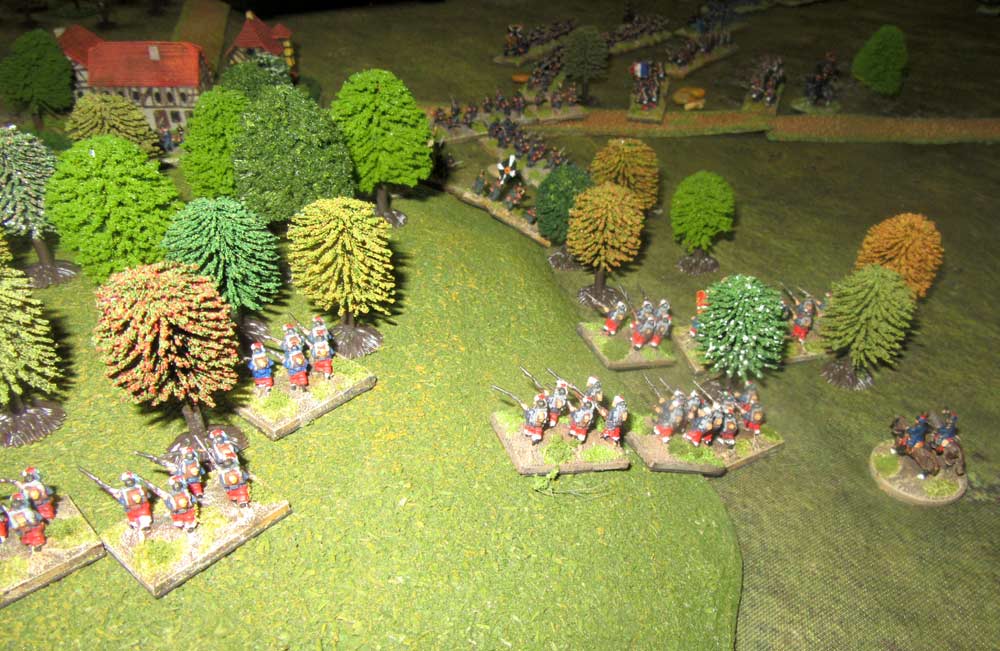 That was where we decided to stop the game. We could have gone on, but it was a good place to halt things. The French could still have turned things around, but it was a tough proposition. This though, was very much a learning curve game, What was impressive is that of the four players, only I had played Piquet – Field of Battle before, but within half an hour everybody had got the hang of it. That in itself was quite impressive. In the end everyone said they’d enjoyed the game, and really liked the feel of the rules. We’ll try them again next week – but this time it’ll be with larger Napoleonic figures, to see how that changes the way things play. 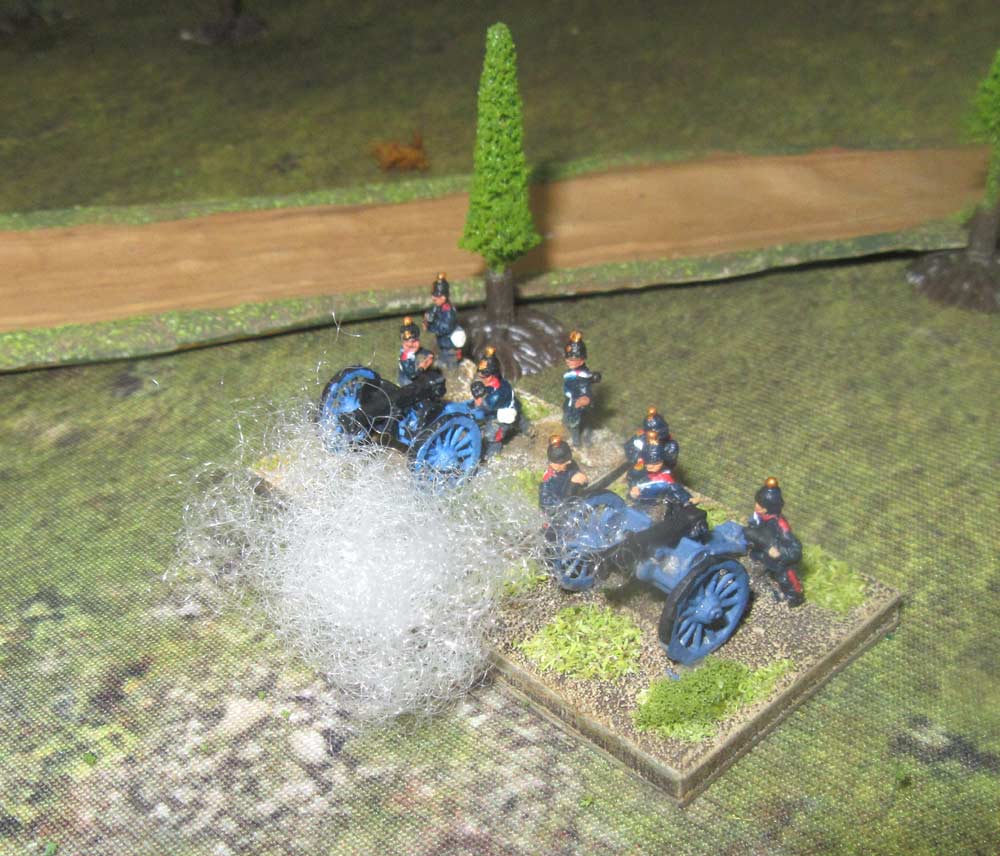