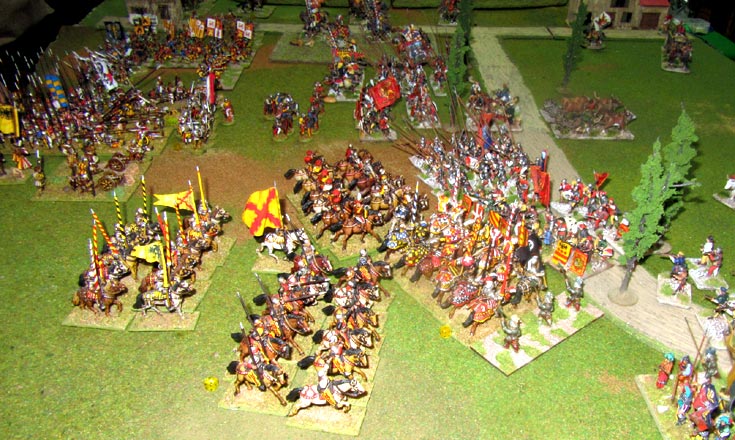 It was good to get back to shuffling figures around the table after a few weeks break. I was actually in at the club last week, but the only game on offer was a boardgame – Junta. While it was quite fun to play, it wasn’t “proper” wargaming, and it certainly wasn’t photogenic. That’s what comes when you go away for a fortnight – people arrange silly games!

This week was also a pre-arranged affair, set up by German Michael. It was a Renaissance clash, between his Imperialists, backed by some Spaniards, against my Venetians and Donald’s French. The game was played out on a strangely-shaped 8×4 foot table. This meant it was a long thin battlefield – just a large featureless plain, with hills at either end. That meant there was no room for finesse – just a straight at ’em game.

We had five commands a side – three “battalias” of foot, centred around a pike block with its supports, and cavalry on each wing. Two of our battalias were Venetian and one was French (or rather Swiss), while the enemy had two Imperialist battalias, and a Spanish one. The Venetians-French had more heavy cavalry than their opponents, although we were fairly evenly matched in stradiots. To compensate, Michael gave the Imperialists a huge amount of extra artillery.

The fighting began with Olivier, commanding the French, being told by Michael (Imperialist and referee) that his elite gendarmes had to charge forward, regardless of the cost. That meant they were forced into the front of the landsknecht pikes. Then, Michael told Olivier that as he hadn’t actually declared a charge, then he couldn’t make contact. That meant a turn of messing around getting shot at point-blank range before the suicide charge could actually take place!

The result of course, was a guaranteed French repulse, with half the gendarmes being wiped out. After that the French played a delaying game, tying up about half of the Imperialist army while my Venetians did their best to turn things around. On my side of the table I was up against Donald, who commanded his own Spanish augmented by a handful of assorted Germans. As he was determined to stay put, I plodded forward, towards the waiting enemy.

In fact it was artillery that dictated the course of the game. We had three medium guns, and since we were advancing these weren’t much use. By contrast the Imperialists had nine, including a couple of heavies. So, we either had to close fast and try to capture the enemy artillery, or risk being whittled away to nothing by cannon balls. That’s why I launched an all-out advance, screened on my right by the stradiots, who bravely screened the rest of the Venetian army from the heaviest Imperialist guns.

The trouble was, with Pike & Shotte artillery are devastatingly effective, particularly at close or medium range. So, the nearer I got, the worse the pounding I took. First my skirmish screen of arquebusiers was dispordered or shot away, which opened up my pikes to the barrage.  They soon got disordered too, and under the rules disordered units can’t be ordered to move forward or back – they just sit there in front of the guns, getting shredded. That’s exactly what started to happen.

The only way forward was to unleash my Venetian men-at-arms. They charged the guns, but while I overran one piece, the rest of my horsemen were halted by disorder, and so made no headway. So, effectively most of my army was now pinned down in front of the Imperialist guns.  Appeals for divine help from my “carrocio” (above) went unanswered…

Over on my right the French and the Germans were still sparring, with each side launching cavalry attacks. Michael’s German men-at-arms even charged one of my Venetian crossbow militia units. Now, crossbowmen have no effective closing fire in the rules, but Michael had made an amendment, giving them a reduced ability shoot. Amazingly, this proved enough to repulse the charge.

Undeterred, the Imperialist horse tried again – and again. In fact they launched three charges in all before breaking the militia, and got pretty badly battered in the process. At the same time my other militia crossbow unit saw off a fierce attack by Spanish sword and bucklermen, which at least propped up my centre for a bit.

The only thing that really let me off the hook was break tests. I had to make a few, for a badly shot-up Venetian pike block, for my Venetian men-at-arms, and for a unit of stradiots. In all but one case I didn’t flee the field, but retired – which neatly got me out of range of those darned Imperialist guns. I lose a unit of lanza spezzata  heavy cavalry though. For his part Donald was taking some light casualties too – that gun and a supporting unit of two-handed swordsmen. With that the battle petered out. as it was almost time to pack up, and we had a lot of lead to put away.

The battle then, was something of a draw, but really it was a marginal defensive victory for the Imperialists. Breaking the back of the Fench gendarmes at the start sort of pulled our teeth, and after that the Imperialist guns saw to it that their defensive line was all-but impregnable. One of the problems with Pike & Shotte is that when the going gets tough the rules really bog down, particularly when you get so many little but powerful units whizzing about the table. Still, it was an interesting game, and it looked truly spectacular.