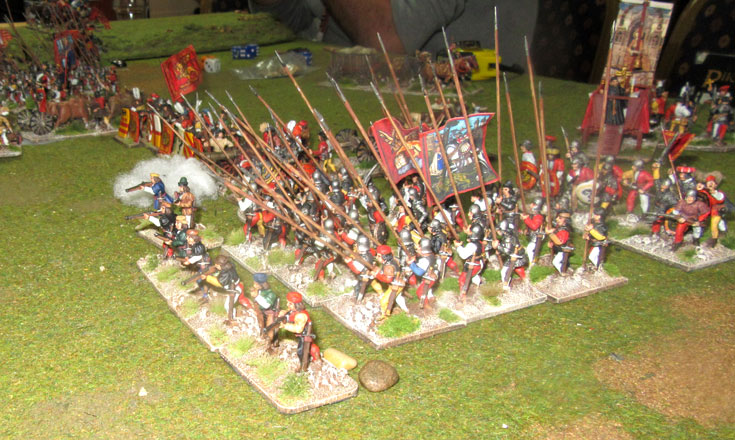 German Michael had been whining about not playing a Renaissance game for ages, so that’s what we did this week, just to keep him quiet. When I arrived he’d already set up. It was only a 6×4 foot table, and he’d so many troops he filled all of one side of the table, wall to wall. He’d even set up a large battalia on my side too! Clearly that wasn’t on. So, after some more moaning he agreed to take some of his troops off, so I could actually deploy my army. We also scaled down the game a bit, so we’d have a chance of finishing in  in a standard three hour club night. He likes his toys, and tends to get over-enthusiastic at times, bless him.

Also, Michael doesn’t like scenery. So, the battlefield was bare, apart from two low ridges on either of the short sides. We both had two battalias of foot apiece, and two more of horse. Each battalia had a pike block, some people with big choppers, some arquebusiers and a few crossbowmmen. Oh, and a gun. Each cavalry “brigade” was a mixed bag of lance-armed men-at-arms and skirmishers- stradiots or mounted  crossbowmen. Bart and I commanded the Venetian-Veronese rebel alliance, while German Michael and New Michael took charge of the Imperialists. After we started, they were joined by Alisdair, who took command of their left-wing cavalry.

In theory the game was set to the east of Verona, where the locals (played by Bart) were rebelling against the Emperor Maximillian’s rule. The local town was San Bonifacio, but for some reason Michael calls this battle “Kümmerling”. It probably means something rude in Swabian. Anyway, I took the Venetian left, and Bart – my Veronese ally – the right. I was facing German M., while Bart was opposite New M. Now usually, I rely on defensive tactics and firepower to win the day, as my Venetians are usually outclassed by the enemy foot and horse. That though, is mainly when I fight the French. These were just Imperialists, and so I thought what the heck.

So, on the first turn my cavalry surged forward, as did Bart’s horse on the right. Now, Bart always charges, but I think my advance took German M. a little by surprise. The first unit in front of my Venetian lanza spezzata was a unit of mounted arquebusiers. They’d just evade, but I hoped to charge on into the heavy cavalry behind. In fact they failed to evade, and got swept aside. Then I charged on into the better German men-at-arms, and got bounced. I pulled back onto the hill on my left, to lick my wounds.

Over on the right Alisdair had now arrived, and his Imperialist horse stopped Bart’s Veronese cavalry dead. Eventually, Bart was forced back, although all of his units were still in play. to be honest the Imperialists were a little shaken up too, and both sides had to sort themselves out before doing anything else. In the centre the two sides advanced slowly towards each other, and exchanged artillery shots.

So, with my cavalry rallied, German M. charged them, and got beaten. He rolled badly on his morale test, and the unit was lifted from the table. In fact this acted as a signal for the others. I charged and routed his second good cavalry unit, and within two turns all of the Imperialist horse on their right flank had either been slaughtered or had fled the field. That left me free to bully his Landsknecht pike bock.

They formed “hedgehog”, which really pleased my gunners, arquebusiers and crossbowmen. To help them along my stradiots charged German M’s gun in the flank, and wiped out its crew before pulling back. With his flank collapsed, German M. was hanging on by his fingernails. So, it was up to New M. and Alisdair to save the day.

Over on  my right though, New Michael’s pikes kept being disordered by Venetian artillery fire, and so they never really got a chance to advance. then his arquebusiers joined in the fun. On the Imperialist left Alistdair’s cavalry tried to advance too, but the recovered Veronese horse stopped them from harassing the Veronese infantry. So, things sort of reached a stalemate over there. Both sides skirmished a bit with their horse, and lost a unit apiece. That though, wasn’t where the battle was decided.

With the Imperialist right gone, then it was all about the battle for the centre. First to go was the landsknecht pike block in front of me. Threatened on the flank by cavalry, and pounded by artillery, arquebuse fire and crossbow bolts, it eventually became shaken, and then had to test its morale. It passed, but the following turn it all proved too much, and the German mercenaries turned and ran. Better still, a unit of supporting two-handed swordsmen had to test too, and they bolted as well.

Over on my right Bart also managed to make the Landsknecht block in front of him shaken, and then a small unit of arquebusiers tipped things over the edge. They ran too, which meant that in the Imperialist centre, there were only a few scattered units left. It wouldn’t be enough to stem the Venetian and Veronese tide.

That just left the Imperialist cavalry – and the Emperor Maximillian. As it was now clearly the last turn German Michael sent him forward at the head of his remaining infantry. It was a “follow me” charge, and it might just have worked. It didn’t though, and the Emperor was shot to pieces, along with his last effective unit. So, that was it – a thorough Venetian win, and the sticky end of a Holy Roman Emperor. Of course, the Almighty was clearly on our side – he only claimed he was “holy”, but we could prove it, as we had a Carrocio on our side…