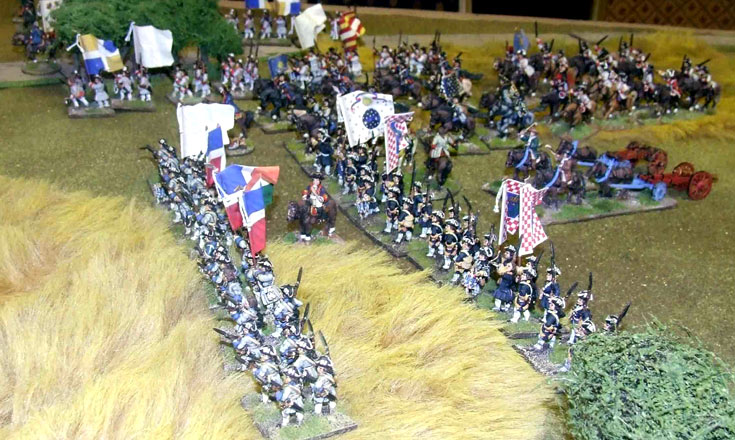 The Seven Years War, Warfare in the Age of Reason, 28mm

Warning bells should have been ringing when Dougie (commanding the Prussians) said he was concocting an “interesting scenario”. He didn’t use “fair”, or “balanced” – just “interesting”. I was told to bring two brigades of French foot, and one brigade of cavalry, and I’d be marching onto the table in a flank movement to fall on a Prussian flank. Dougie was very specific about my axis of advance, along a road leading to a hill where a Prussian brigade was milling about – looking as hapless as he could make them.

In true 18th century style I formed from march column into two lines, and began the advance. Meanwhile my cavalry were trying to form up on my exposed flank, but as they were far down the column they were still somewhere in the rear when Dougie sprang the trap.

These pictures pretty well storyboard the whole sorry tale. In the ones above, you see the hapless Prussians, and my troops forming into line, with the cavalry coming up behind them. So far so good. Then came the bombshell – this was based on Rossbach, and that Seydlitz’s cavalry – a brigade of veteran cuirassiers and another mixed one of dragoons and hussars – had just appeared on my left flank. Not only that, they suddenly appeared on the crest of a hill, and well within charge range!

What followed had a sort of grim relentless inevitability about it. The two regiments of Prussian cuirassiers charged home into the flank of my two left-hand units – a battalion of the Touraine Regiment and another German one – La Mark. One was routed in short order, while the French unit retired rather precipitately, crashing through the troops behind them. Then came the Prussian exploitation move.

It seems the cuirassiers were only just getting in their stride. The next battalion of the Tourraine Regiment didn’t stand a chance, and was simply ridden down. However, the second battalion of La Mark Regiment had managed to turn to face, and loosed off a close-range volley that emptied three Prussian saddles. Hurrah! Was this the great turn-around? It seemed not.

While the cavalry hesitated, and my turn came the Prussians charged again. This time though the French cavalry had wheeled into position and counter-charged. The result of the three-way clash between the Prussian cuirassiers, the French horse and the Germans of La Mark was a stand-off. Apparently that was the best result I could have hoped for in the circumstances – even though I was still praying for miracles.

The left-hand cuirassier regiment then smacked into a third French battalion – one from the Condé Regiment, which didn’t even try to stand, but fled the field, largely as other survivors were streaming past them. The army was fast becoming a disorganised rabble, and apart from that one battalion of the La Mark Regiment, nobody on the battlefield had yet fired a shot! Meanwhile the Prussian foot was advancing for the kill, the first brigade having been reinforced by a second, which consisted mainly of grenadiers.

It was time to call it a day, and in the true spirit of the age I capitulated, and was granted the opportunity to take my remaining toys with me. Next time Dougie dreams up a scenario I’ll be ready for this sort of trickery, and meanwhile I’ll be practicing forming emergency squares, and guarding flanks.

Tags: Warfare in the Age of Reason