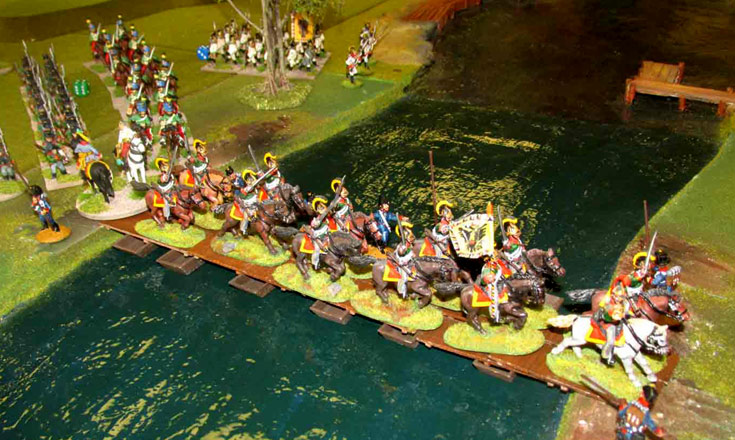 This weekend I was up in Kirriemuir, taking part in the latest League of Gentleman Wargamers extravaganzas. I haven’t been at one of their games for over a year, and I miss their style of large-scale Napoleonic battles. In terms of troops numbers this was smaller than usual, but as it was fought out on a 28 foot by 6 foot table, it still looked spectacular. The premise of the game was that while Napoleon was fighting the Waterloo campaign,  a smaller French army inside France itself was holding the Austrians, Prussians and Russians at bay. The result was this fictitious game – a scenario dreamed up by Charles S. Grant.

The Brigadier is nothing if not inventive, and he came up with a challenging scenario – particularly for the French, who had a long front to defend, with no idea where the main Allied blow would fall. The French position was dominated by a long ridge, running most of the length of the table. On the left – or rather just behind the French left flank on a separate table was the town of Rochefort, with its Vauban defences. The French left flank was anchored on the well-defended town, while the right flank was protected by a wide, unfordable river. In front of the ridge were three small villages, which in theory offered something of a defensive barrier. The battle though, was merely the Sunday game.

Before it, Charles had organised four smaller games, each offering a different challenge. All of us would play on three of them during the Saturday, and whoever won all their games – or most of them – would command the Allied and French armies the following day. The rules for the weekend were homegrown ones produced by Kevin Calder – an excellent set by the way. The first of mine pitted a French force against Vendee rebels. The French had to get a convoy of powder and shot through to a barracks in the town, and the rebels were out to stop them. In our game the convoy was attacked with vigour by Charlie Grant’s rebels, but the convoy got through, albeit it battered and bloodied. Meanwhile my garrison regiment sallied out and cleared the town of the rebels. It was a clear French victory.

In the second game, a French blocking force had to delay a Prussian and Russian advance. The Prussians were slow and steady in their advance, but my main problem came from Peter Nicholson’s Russians, who were relentless. My troops were beaten back and whittled down, until by the end of the game all I had left was a regiment of dragoons and a battery of horse artillery – not enough to stem the Allied tide. Still, as I was still in the fight Charles awarded me a point for trying. In my third game my French blocking force was facing a joint Spanish and Portuguese assault. this was a lot easier.

The Spanish seemed to take forever to advance, and took the whole game to clear my defenders out of the farmyard that anchored my left flank. Meanwhile the Portuguese were left to launch a series of frontal attacks against my line, which not only held, but inflicted heavy casualties on Kevin Calder’s attackers. On the final turn I even managed a cavalry charge with my Chasseurs, who rode down a Portuguese infantry line. That clinched another win, but while – as Meatloaf tells us – two out of three ain’t bad, it wasn’t enough to give me my Marshal’s baton for Sunday. That went to Dale Smith, who won three games in a row, as did Colin Jack, which made him the Allied CinC.

As we weren’t sure where the Allies would attack we spread our forces all along our line – and a very long line it was too. My job was to hold the far left of the ridge, and the village beyond it, and to maintain our link with Rochefort, over to my left and rear. Marshal Dale was worried the Russians would launch a steamroller against our left flank, and roll up our line. He needn’t have worried – it turned out my bit was the quietest part of the French line. So quiet in fact that my Russian opponent – Peter again – didn’t seem to have much lead on the table. I rather rashly decided to move forward to investigate – so initiating a ding-dong mini battle that would fizzle on for the rest of the day!

Two brigades of dragoons rode forward, and ran into a brigade of Russian cavalry moving in onto the table in the other direction. My leading brigade was wiped out, as was an infantry battalion of the regiment I moved forward in support. Than things started to improve. One after another the Russian cavalry regiments were destroyed, followed by two battalions of Russian infantry and Peter’s divisional commander. While our own private little battle didn’t achieve much, at least it kept Peter and I royally entertained during what might otherwise have been a quiet day!

The real battle was fought on the other side of the table. First, the large Austrian force on the wrong side of the river managed to deal with this problem by building a pontoon bridge. I tip my hat to Charles – he had all the bits for it, and so we could watch the bridge slowly expand across the river, as the Austrian engineers did their thing. It really was a joy to behold! Less pleasant though, was the fact that this bridge released a whole pile of Austrian troops, who arrived in time to support a concerted Prussian attack on the French right flank.

The white-coated Austrians began trudging across the bridge, and soon their assault columns were pressing forward, deep into the French side of the table. In front of the centre right of the French line was a small village. It was initially occupied by the French, but they were driven out by the Prussians, who were driven out again in their turn by French reinforcements. this un-named little village was a real charnel house – and the key position on the battlefield. Eventually though, the advance of the Austrians on the Allied left meant that the Prussians were finally able to take the village and hold it.

It was now starting to look bad for team France. The Austrian juggernaut had reached the French table edge near the river, and was methodically pushing the French back – or simply rolling over their troops. In the centre Dale found he had no reserves left – the troops he might have had were either on my side of the table, or had been committed to probes against the Allied centre, held by the Russians and Prussians. Periodically Charles announced special events – the arrival of news from Belgium, the arrival of French reinforcements, or the sowing of panic among the Prussian troops.

It all made for a particularly colourful game. Naturally the French reinforcements arrived in the least important part of the battlefield – the town of Rochefort – so they had to be marched through the burning village on my side of the table, then on up the table. needless to say they never made it far enough along its 28 foot length to reach the opposite flank.

So, at 4pm Charles called a halt to the fight, and after surveying the field and quizzing the rival commanders he declared the battle to be an Allied victory. This was fair enough – we were on the ropes – but on my side of the table we had the Russians on the run, and were actively funnelling troops back towards the centre. Still, it was all too little too late. It was probably at that time that news of the outcome of Waterloo reached Rochefort, meaning the game was well and truly up for the French. All in all it was a really enjoyable weekend – a weekend playing with nice figures on nice terrain, in good convivial company. Its a nice little group, and the guys who were there know how to put the fun into wargaming.