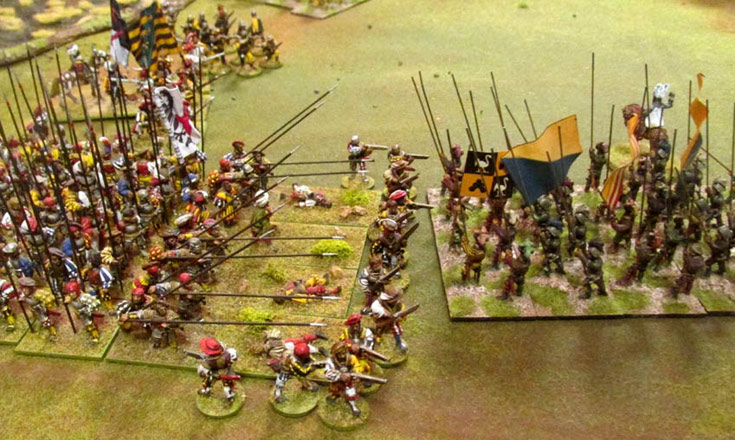 This week, “German Michael” staged another of his renaissance games. it was billed as an ultimate “big fat battle”, with 64 figure pike blocks. Unfortunately nobody told the Swiss, who turned up with regular-sized 32 man ones. Still, it looked good, especially Michael’s big French and Landsknecht units. As a game though, it left a lot to be desired. A few regulars (you know who you are) didn’t turn up for it, as they were either working or saving their wargaming powder for the weekend.  Still, we had three players a side, and a nice-looking table, dominated by a walled village.

On the far left Donald commanded the Basel and Berne pike blocks, supported by a few smaller units, and a couple of guns. Facing him was Michael’s Bande Nere landskneckts, and some French Gascony pikemen, plus the usual guns and skirmishers. A big wood – and the village – effectively divided the battlefield in two. On the right of it was the Swiss Guard, commanded by Jack, supported by guns and crossbowmen, while on his right came my cavalry – a mixture of Italians and stradiots. Facing us was Ken’s command – two units of elite French gendarmes, and five units of mounted crossbowmern and argoulets. So – two sides of the battlefield, and two battles. As nobody had the type of troops capable of occupying the village, it rather strangely stayed empty throughout the game.

In the real battle of Novara, the French (with some Venetian help) under Louis de la Tremoille were besieging the small city of Novara, to the west of Milan. The Swiss (with some Milanese help) attacked them, assaulting the French from different directions to keep them off guard. the French withdrew to their camp, where they were eventually defeated. It was a fairly bloody battle, even by the standards of the period, and included the mass execution of landsknechts caught fighting for the French.

Our battle wasn’t going to be exactly like the real thing, but would contain some of the flavour, through the use of large pike blocks. That plan, of course, fell apart thanks to a lack of Swiss.

Our side of the battlefield – the cavalry side – or Swiss right and French left – was always going to be a sideshow. The real fight would be decided by the matched pairs of Swiss and French pike blocks on the far side of the table. So, we spent most of the evening skirmishing. ken advanced and chopped up one of my units of stradiots, which was rash enough to pursue his mounted crossbowmen – and land up isolated. Then the two sides maneuvered, fired their guns, and repelled the odd charge, but nothing important happened until  the last half hour of the game. Then my Milanese men-at-arms went into action against the French gendarmes. One unit failed its melee, and had to take a break test. I rolled a “3” on 2D6, which meant a rout. While Ken said I didn’t need to, I felt I also needed to roll for the second Milanese unit supporting it. I rolled another “3.” Lift-off. At that point the cavalry battle fizzled out. Ken clearly won it, but at least we kept the elite gendarmes away from the Swiss pike blocks…

On the far side of the table Donald advanced with his Swiss, heading straight for his French and Landsknecht opponents. They duly advanced too, supported by some fairly accurate artillery and skirmish fire. When the two sides clashed in looked very spectacular, but  any hoe that the Swiss would simply roll over their opponents foundered thanks to some more lousy die rolls. Slowly the landsknechts began pushing the Bernese back, while closer to the centre of the table the Gascon pikemen amazingly held their own against the Baselers. When the game ended Donald’s two big blocks were retiring, and the jubilant French and Germans were following them up, to keep the pressure on them.  So, at 10pm we ended the game, and declared it a clear-cut French victory. History was reversed – until the next time. While this battle didn’t involve my nice-little Venetian army, some Venetian cavalry made an appearance, doubling as Milanese. Next time – with luck – the troops of La Serenissima can play their proper part.