Recently, a care package arrived from my pal Gerry. In it was a pile of unpainted 10mm figures, including enough for an Austrian Corps. So, thanks to him, I could expand my Franco-Prussian kit into another war. This then, was the inaugural game of my new Austrians. I opted for the opening part of the Battle of Nachod, fought in late June 1866. The terrain was pretty ad-hoc, but roughly resembled the real thing, centred around the villages of Wenzelberg and Wyskow. We played the battle on a 6×4 foot table. 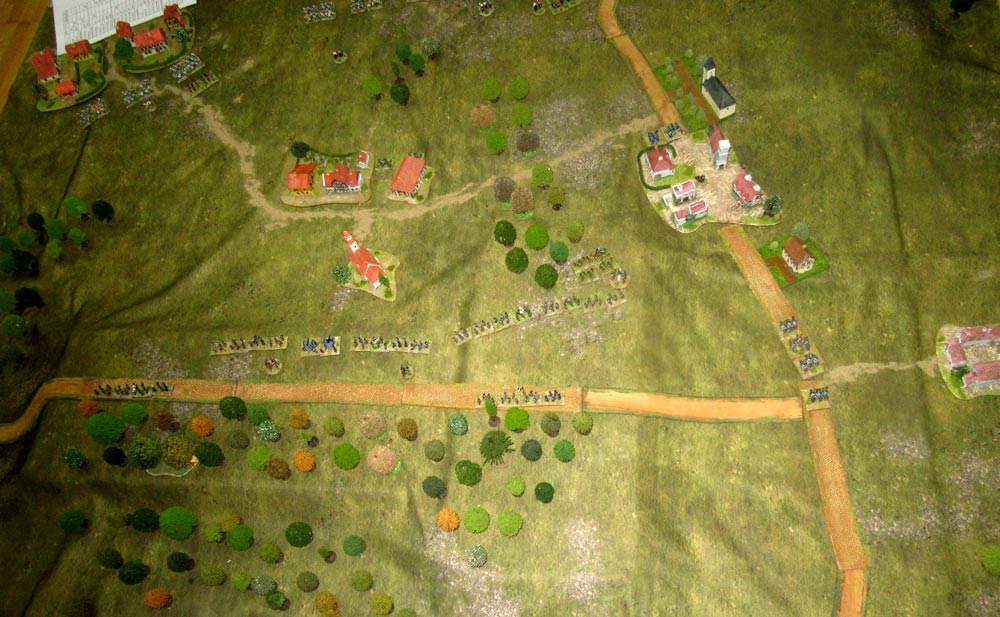 This shows the opening setup, with a brigade-sized advanced guard of Prussians deployed along the  ridge above Wenzelberg, and the Austrians of Hertweg’s brigade appearing on the far table edge, with their jaegers in the outskirts of Wenzelberg. As we stuck polystyrene hills underneath the terrain mat to make the high ground, it doesn’t really show up here. West is at the top. 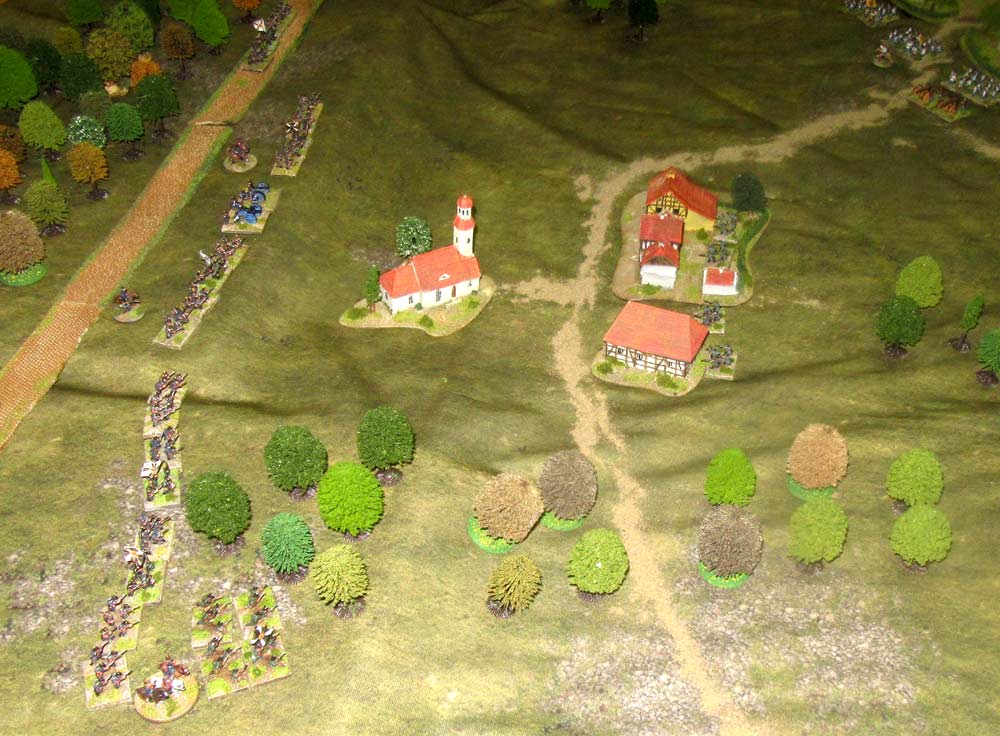 As I had enough kit for two Austrian brigades, we decided to play the opening two hours of the battle, before the Austrians brought up the second two brigades in their Corps, and before the Prussians brought up reinforcements. So, roughly from about 8.3 to 10.30am. In the picture above, you can see the Prussian line more clearly, looking south from somewhere above the village of Wyskow.

In our game, Bob and Sean played the Prussians, commanding Jonak and Hertweck’s brigades respectively, each with two three-battalion regiments, plus a battalion of jagers and a gun battery. I played the Prussians, with a smaller force. For our game each was divided into two “command groups”. Sean also had command of a regiment of Austrian ulhans, deployed on their left, next to the Corps Commander, Field Marshal Ramming. 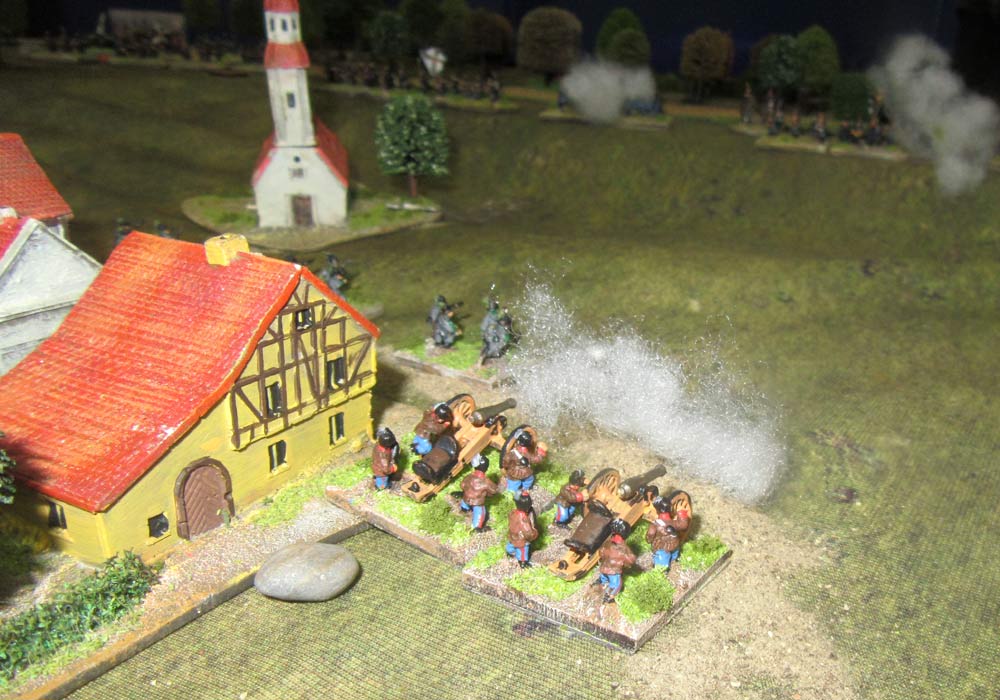 In fact the Austrians advanced fairly quickly, with Hertweck’s brigade heading directly towards Wenzelberg, while Jonak’s brigade, appearing behind them veered more to the left, towards Wyskow and the narrow strip of Wenzel wood, between the two villages. Having cleared Wenzelberg, Jonak’s guns deployed to led their fire to the Austrian assault. There was no doubt there would be one – the Austrians had to capture the ridge, and their tactics demanded they could only advance in column. So – they were coming! 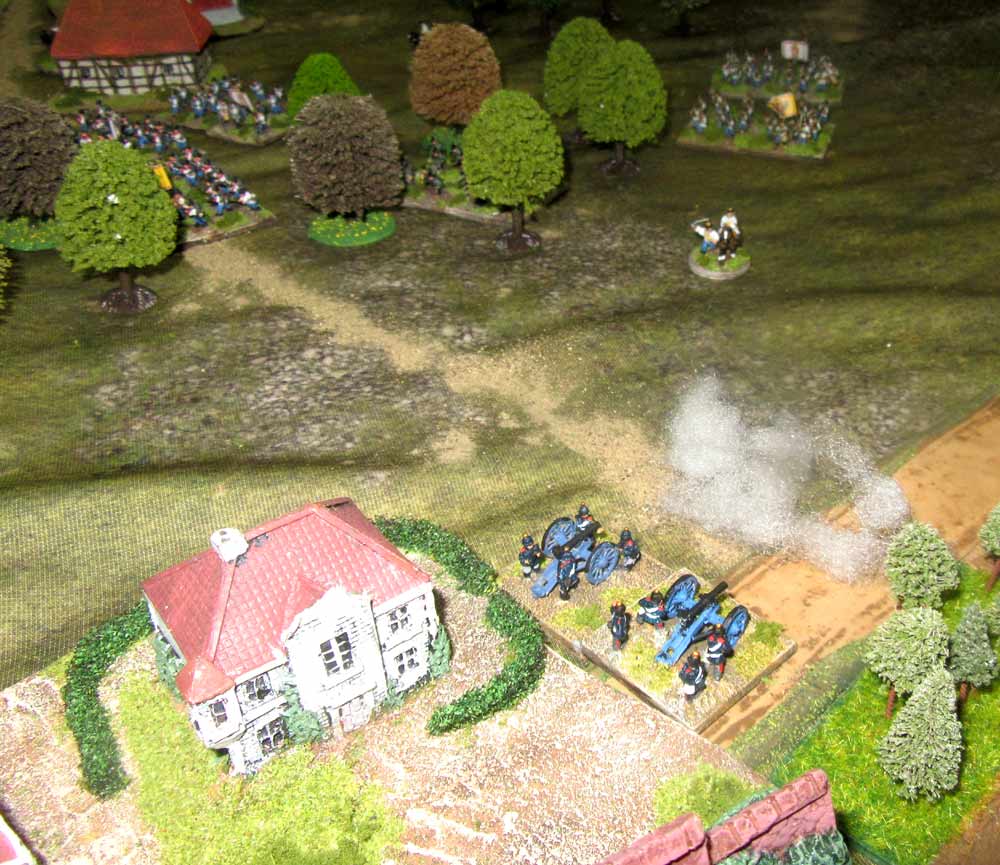 All I could really do was to fire my gun battery deployed on the western side of Wyskow. They struck lucky though, and their fire routed the leading Austrian battalion, from IR 20 of Jonak’s brigade. Field of Battle its all about turning cards, and while the Austrians got lots of move ones, mine seemed to lack any firing cards. So, while I could always fire, I couldn’t reload until a suitable card came up. So, apart from those guns, which needed to fire or risk being charged, I held my fire and waited while the Austrians came closer. 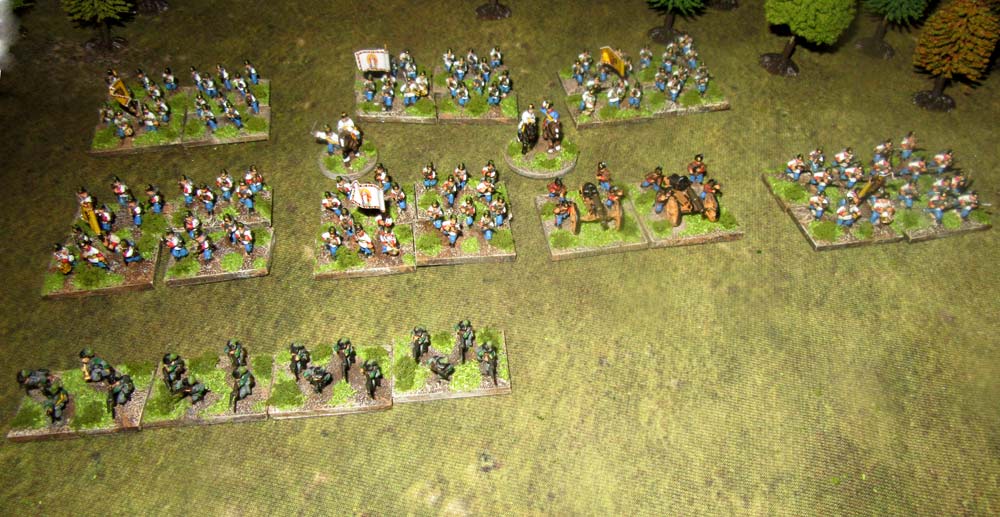 The real threat was to my left, at the southern end of the ridge. There, Hertwek had massed his entire brigade, and they were starting to work their way around my left flank. Apologies by the way, for this reshot photo. The “action” one (shown below) was rubbish! Actually, it doesn’t show the two battalions in front of these, which were now climbing the southern end of the ridge.

Then, Bob pulled an “Melee” card and launched his leading battalion from IR56 straight into the flank of my left-hand battalion, of the 58th IR. The other Austrians supported the charge. The only thing going in my favour was that the 58th was my “crack” regiment. 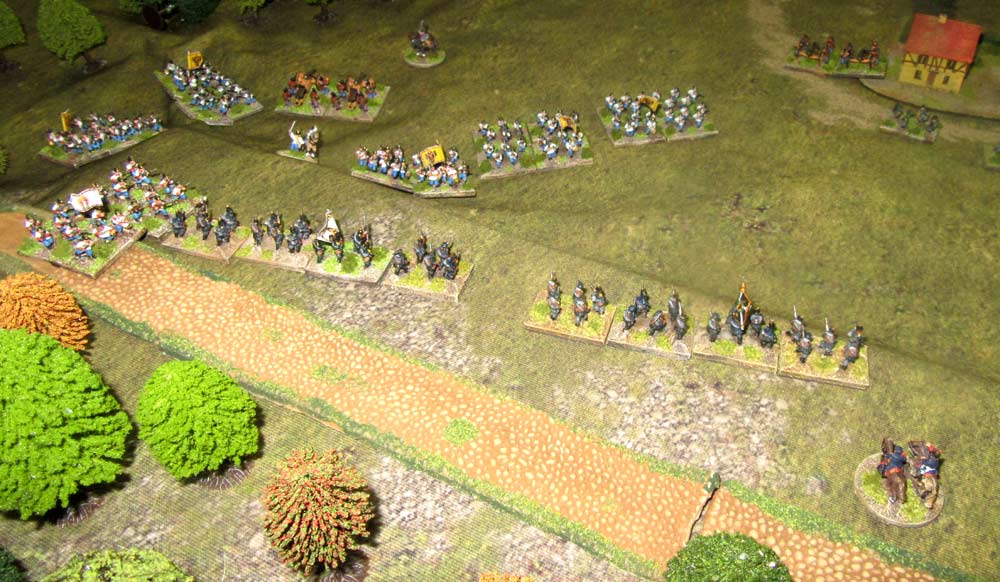 The melee ended with my Prussians being pushed back disordered, after taking a “UI” hit (Unit Integrity). Four of those and you’re destroyed. There was now a very good chance that the Austrians could now roll up my whole line. That though, was where things started to unravel for the Austrians. At that crucial moment I got a string of cards, and most of them were firing ones. 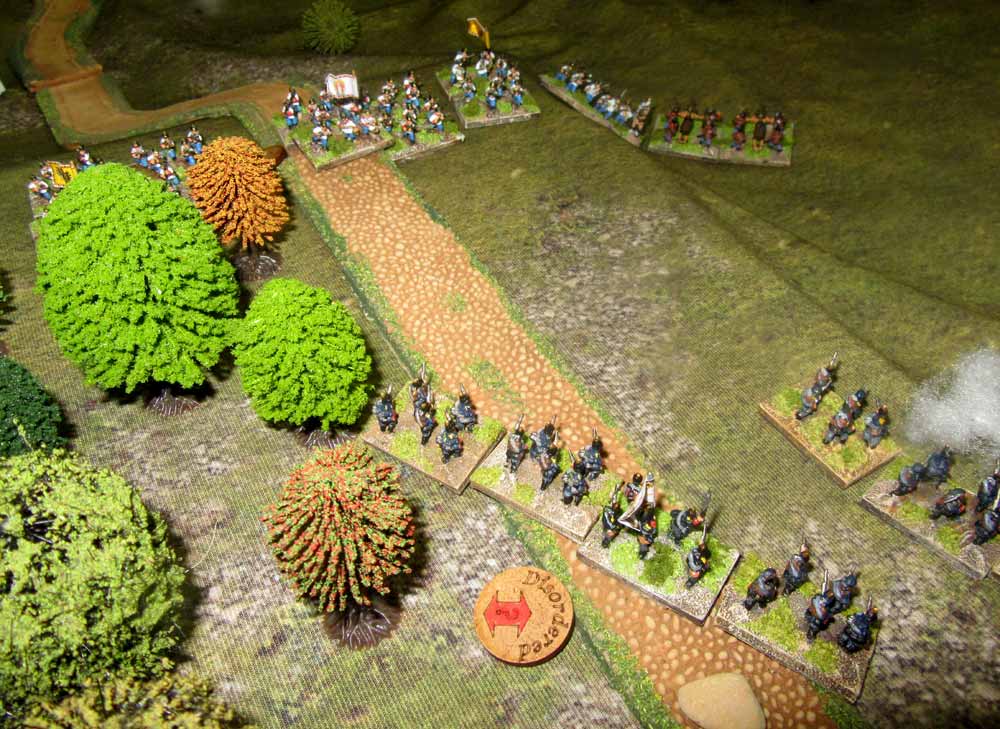 The Prussians on the ridge began firing at the Austrians massed on their left, or at the ones around Wenzel woods. Two of Bob’s battalions from IR41 were poised to attack the next Prussian battalion in my line, supported by the disordered Austrians who had just charged and won the melee. Instead they were both fired on, with two “infantry fire”, one “artillery fire” and a “Rapid Fire” card in quick succession. By the end of that run one of the battalions had routed, and the second one was falling back. Even my Disordered one joined in the shooting. 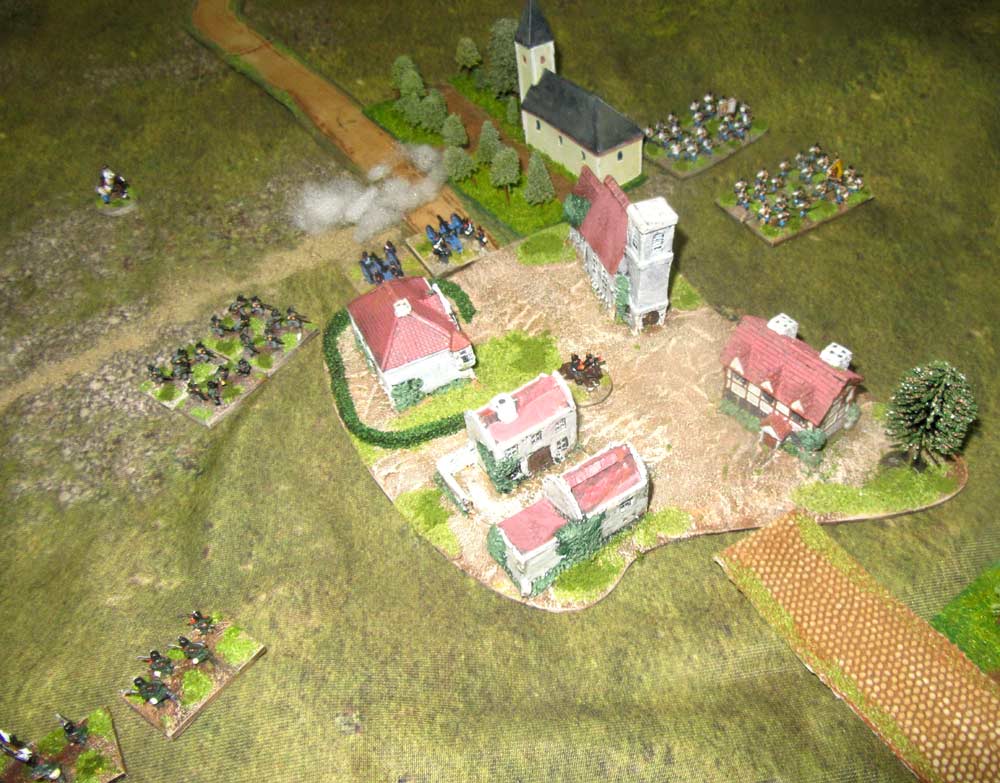 As if this wasn’t bade enough for the Austrians, Jonak’s brigade was in trouble too. First, my jaegers routed their Austrian counterparts as they approached Wyskow. I moved a reserve battalion of the 37th Fusilier rgt. into the village, to support my guns, and these began firing at the two battalions of IR20 that were advancing to the north of the village. One of these was routed, and the other forced back with heavy losses. As if that wasn’t enough my own 1st Dragoons charged and routed the Austrian 10th Ulhans to the north-east of Wyskow. Finally my gun battery saw off another battalion of the Austrian brigade, from IR60. 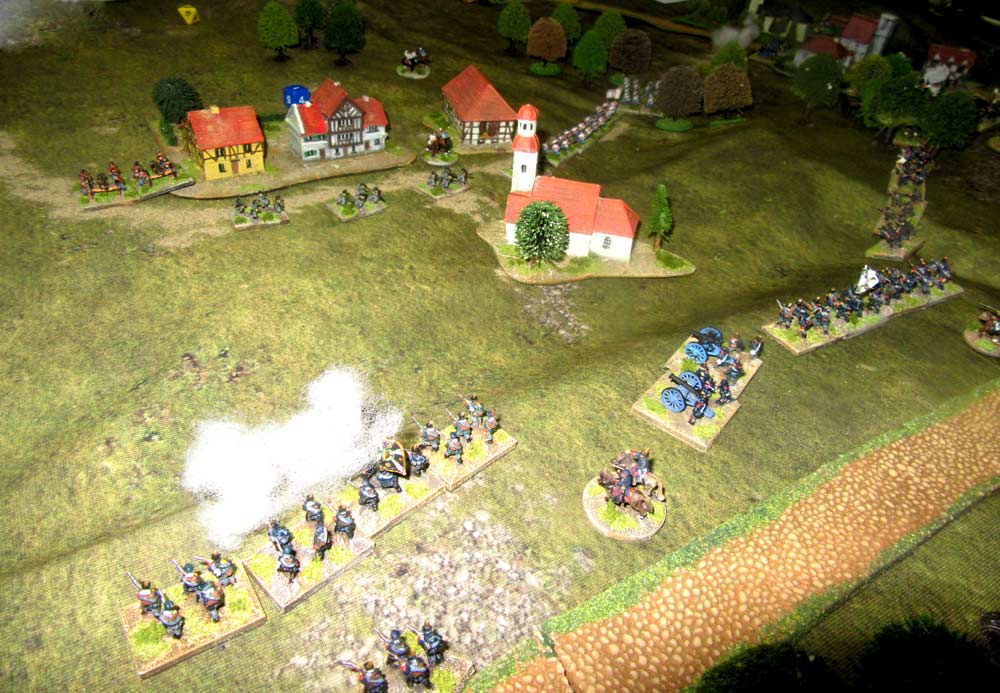 That in itself was enough to drop the Austrian “Army Morale level down to Zero. That didn’t mean an immediate withdrawal – in fact Bob passed that army morale check – but it wasn’t good. The fighting around the Wenzel woods continued, and the Austrians had a reprieve when a battalion of the 37th Rgt. was forced to withdraw to the east, into the Dub Woods at the back of the ridge. That though, wasn’t enough. It was now clear that the Austrian attack had failed, and the Prussians were on a roll.

So, Bob did the gentlemanly thing and conceded. You lose an Army Morale Point when you take a UI hit, and we started out with 20 Army Morale points for the Austrians, and 15 for the smaller Prussian force. When one side hits zero, any more losses are credited as extra points to the other side. We ended the game when the Austrians had 0 points, and the Prussians 18, the defenders having dropped to 12, then gaining 6 after the Austrians hit zero. So, it was a clear-cut Prussian victory.,, which was pretty much how the real battle panned out. 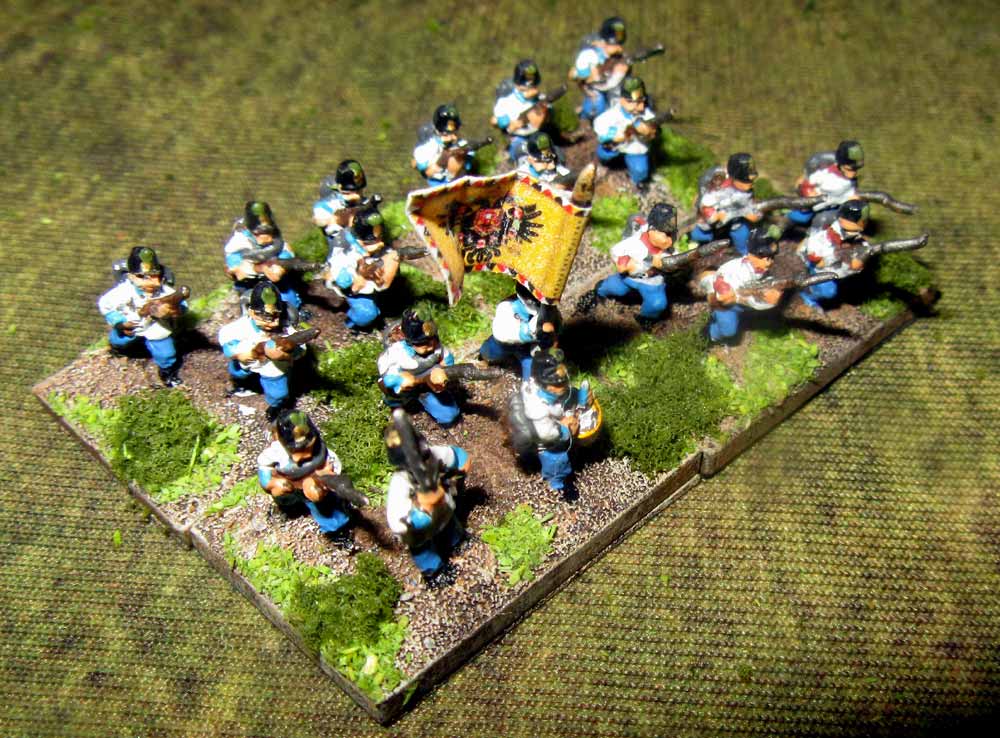