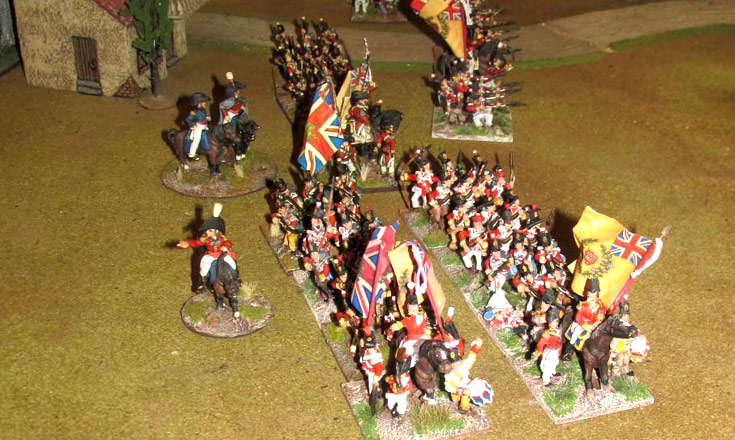 I’d arranged to play a small Napoleonic game when Bill Gilchrist got back from his holiday on Madeira, and this was what we came up with. The scenario was drawn straight from the Black Powder Albion Triumphant Peninsular supplement, but for copyright reasons I can’t publish the map. Essentially the 8×6 foot table was laid out in a symmetrical fashion, with a road running between two villages near the back of the table – one being the British entry point, the other the French one. In the middle a “T” junction marked where a road dropped down the centreline of the table to a third village, midway along the long edge of the table. It’s the one in the photo below, on the right. That road ran through a small wood almost exactly in the centre of the table, while just above the “T” junction was a hill. Two smaller hills lay halfway between the third village and the British & French villages, again in a completely symmetrical way. Got it? Good!

Each of the first two villages was worth one point to the side who owned them at the start, and 6 points to the enemy. The central village was worth 6 points too, while the big hill above the “T” junction was worth 3 points. The two smaller hills were worth one point apiece. You won a point for each enemy unit you destroyed, and whoever had the most points at the end of the game would be declared the winner.

Both sides had similar-sized forces – the core of which was six infantry battalions, in two brigades. The French though had two cavalry regiments to one British one, and a similar two to one advantage in artillery batteries. This was balanced by the two units of light infantry available to the British, one of which consisted of riflemen. So, with the table laid out we began the game.

Both sides led with an infantry brigade, which secured the “home” village, then moved out – the French down the road to the “T” junction, the British towards the hill halfway to the third village. Next on was another brigade of French infantry – actually Swiss in this case – and a British light brigade. Both set off towards the third village, while the last pile of troops deployed facing each other between the wood and the top (let’s call it northern) table edge. The British won the race to the third village, throwing their light infantry into the place, and supporting it with a regiment of KGL hussars and a unit of Portuguese Cacadores (in this case the green-coated Lusitanian Legion).

The French captured the hill north of the “T” junction with comparative ease, and pushed on towards the British-held “home” village. They were stopped by a Brigade of British troops, and a firefight began, with the artillery of both sides joining in. After three turns of this both sides lost a unit. At that crucial point a British unit was demoralised by artillery fire, then charged and routed by some white-coated French infantry.

Things looked bad for team UK until the reserve brigade swung into action. it fired at the white-coats, then charged them through the smoke. The French were routed, and equanimity was restored. Meanwhile on the southern table edge the German hussars charged a disordered unit of Swiss foot, but were hit in the flank by supporting infantry, and took so many casualties they were swept from the field.

This didn’t matter too much, as the following turn one of the two Swiss battalions was broken by fire from the third village, and the turn after that the second Swiss battalion also broke and ran. With the third village safely in British hands the British reserve were able to press home their advantage on the north, breaking another French battalion with musket and artillery fire.

The French reserve  -their two regiments of chasseurs-a-cheval – failed several orders to charge, and the game came to an end when we hit the 12 turn mark. The points were added up – the British got 8 (one for the “home” village, one for the third village and one for their small hill, while the French had to be content with 5 points – one each for their “home village and hill, and 3 for the central hill by the “T” junction. However, when losses were added up the final tally was 12 for the British and 7 for the French, giving Wellington’s lads an emphatic victory. All in all the game was good, and it could easily have gone either way.