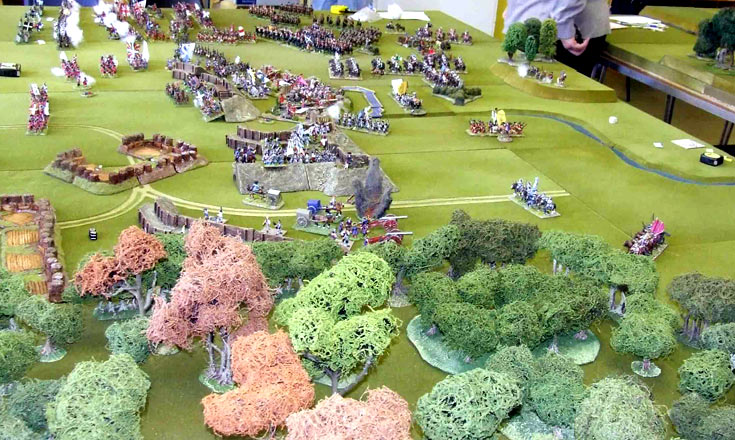 Misc., The War of the Spanish Succession, Beneath the Lilly Banners, 28mm

It was fought out on two large tables, one about 16 x 16 feet (the French right), and the other 14 x 8 feet (the French left), plus a bolt-on to accommodate the arrival of the Allied flanking force. In a few places we pulled the tables apart a bit, to allow access to the centre of the tables, and this, plus the fact the battlefield was divided into two tables meant that it never seemed quite so big at the time! It always amazes me how, in a game this size, people concentrate on their own little sector.

If you don’t know much about the historic battle, it was the last of the Duke of Marlborough’s four great victories. It involved an attack on a strongly-fortified French line, which had a bulge in front of its left side – the defended outpost of the Bois de Sars. Historically, this is where Marlborough concentrated his attack, while on the Allied left the Prince of Orange pinned the French in place by launching repeated (and extremely costly) attacks on the French right.

The French denuded their centre to bolster their flanks, and this is where Marlborough launched the Earl of Orkney, who seized the redoubts guarding the French centre. Marlborough also sent a flanking force which hooked round the French left flank, and emerged behind (to the south) of the Bois de Sars. The climax of the historical battle was a massed cavalry battle, which the Allies eventually won through weight of numbers. It was a very costly victory. the question was, would our refight reflect what actually happened, or would we forge our own epic path?

Well, after two days of play – 16 hours of gaming, involving 14 people (7 a side), the battle was still undecided. The Prince of Orange’s Dutch were launched in brave but futile attacks 0- just like the real thing – and the French force in the Bois de Sars was ejected, although that took an inordinate time.

The French proved reluctant to follow the historical example and strip their centre of troops, forcing the Earl of Orkney to launch his British and Hanovarians against a strongly held French line. The flanking force was stalled by the French reserves, and Lottum’s Prussians launched repeated attacks, but they failed to pierce the French line. Finally, the cavalry battle only began during the last 1 1/2 hours of play, and when the time came to pack up the French were still holding the Allied horse at bay.

The main organiser declared the battle a French victory, albeit a very marginal one.  then again, he spent the weekend as a French commander, so he might have been a tad biased! I think it was more of a draw – but a very costly one.

While there aren’t any plans to stage a refight to decide the matter, the most important thing is that we all took part in a thoroughly memorable game, and got to command vast quantities of lead in a furious, fast paced and thoroughly enjoyable recreations of one of the great battles of history.

Tags: Beneath the Lilly Banners