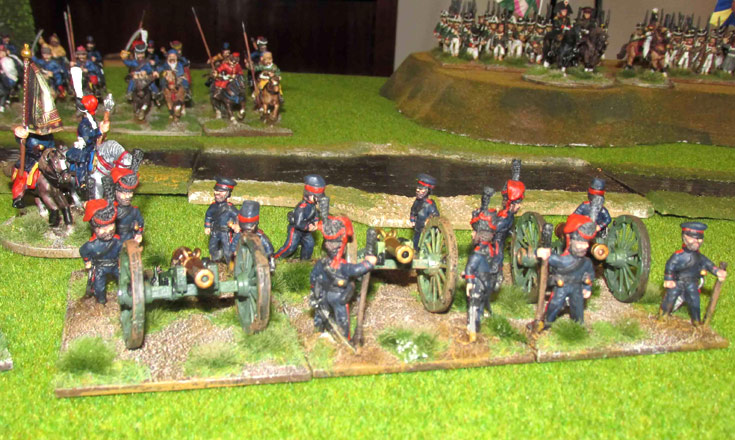 True to my promise to myself, the inaugural game was a big Napoleonic bash, loosely based on Borodino. All the Russians had to do was to hold the roads leading off the table edge until the end of the day. As we started at lunchtime and planned to go down the pub at 8pm, then this seemed pretty straightforward. I commanded the Russian hordes, and they certainly were pretty numerous – three brigades, each of 6 battalions (each 32 figures strong), plus two cavalry brigades (two regiments apiece), and two brigades of Cossacks. More importantly the Russian army was screened by three and a half gun batteries – 21 guns in all.

The poor French and their allies didn’t have any real superiority in numbers, and they were decidedly inferior in artillery. There was a Neapolitan and a Prussian brigade (one deployed on either flank) with four battalions each, plus supporting guns and cavalry. In the centre were my French – 12 battalions (each 36 figures) deployed in three brigades, and supported by a couple of gun batteries. That gave them 14 guns in all – just 2/3rds of the Russian artillery facing them. Still, the French had a couple of cavalry brigades, and a lot of their infantry were experienced veterans. This would be no turkey shoot either way. All of the figures were mine, apart from the Prussians and the Neapolitans, who were supplied by Mark Colston and Chris Henry respectively.

Actually, with more than 1,500 figures on the table the game was unplayable – at least by three people in a little over six hours. Still, it looked great! The Russian centre was dominated by a hill on which a heavy Russian gun battery was placed. The other guns were split into three gun half-batteries, and scattered around the Russian line. The game began with the Neapolitans launching an attack on Lendino village, supported by a battery of French guns on the south side of the small Nanochka River. the village was defended by two under-strength battalions of Russian jaegers, supported by Cossacks.

Nothing much happened here for most of the afternoon, as both sides fired at each other. Then, against all expectations, a Neapolitan assault went in, the troops egged on by Marshal Murat, wearing an outrageously flamboyant uniform topped with three ostrich plumes. Anyway, after a surprisingly poor showing by the jaegers the village was cleared. However, the Neapolitans were unable to do much more during the game, as the exits from the village were screened by a Cossack horse artillery battery and a brigade of Cossack horsemen.

Over on the French left the Prussians also played a cautious game – presumably waiting to see how many Frenchmen were killed before committing themselves to the attack. They amused themselves with some long range artillery fire – which was surprisingly effective. It caused quite a few casualties among my Russian ulhans, until I shamelessly screened them with a battalion of Russian infantry. That though was the only real Prussian involvement in the game. They shot at the infantry all afternoon, but didn’t budge from their little corner of the field. Instead it was left to the French to launch an all-out attack, and to drive the Russians from the field.

They got off to a good start when a French gun battery scored a “double six” when firing at my Russian heavy battery. The guns were forced to limber up and retreat off the hill, leaving the French infantry clear to advance. That’s exactly what they did – all 12 battalions of them, in two waves, aimed directly at the hill. To screen the advance, the French also moved up a brigade of dragoons, which was supposed to protect the flank of the French infantry from any Russian cavalry. However, the French commander on that flank felt this wasn’t really adventurous enough. Instead he launched a hell-for-leather attack at a half battery of Russian guns.

The French dragoons trotted forward, one regiment behind the other. The lead unit – the 15th Dragoons – began taking casualties even before they got within charge range. Still, they went for it, only to be stopped short by close-range canister fire. They pulled back a move, but the Russian guns just kept pounding away until the regiment finally broke and ran. The next unit – the 20th Dragoons – decided to veer to the right, and launch their charge towards the hill.

By that time the main Russian battery had retired to the rear, and Russian infantry were plodding forward to hold the ground until the guns returned. The chargers took casualties during their approach march – crossing a small marsh – and by the time they did get within charge reach the Russians had formed square. The dragoons failed their morale, and withdrew to the marsh, where they remained floundering for the rest of the game, as Russian guns kept firing at them, and prevented them from rallying.

It was now up to the French infantry. While all this had been going on they had been advancing across the table, and had reached the small Stolichnaya stream. That was as far as they got. At that point the Russians launched their cavalry reserve – a cuirassier brigade, which forced the closest infantry to hurriedly formed square. Seeing the danger – the cuirassiers were accompanied by a half-battery of horse artillery – the French 19th Chasseurs-a-Cheval launched a gallant counter-charge, which hurtled into the advancing Empress’ Cuirassiers.

Amazingly the result was a draw – bad Russian dice – and the French infantry were saved as the cuirassiers pulled back to reform. That was pretty much as far as we got with the game. After all, there was a lot of talking, drinking and general bonhomie going on, as well as a fair bit of rules checking, as we hadn’t played GdeB for a while. With hindsight the game was stilted in favour of the Russians. The solution – to paint up more French and their allies, and fight the battle again some time! Refighting it with less lead on the table isn’t really an option!