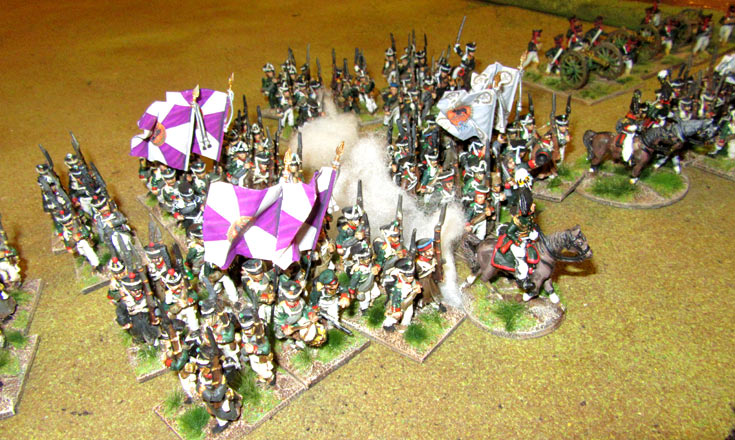 This week we returned to the Napoleonic Wars, in a scenario set during the Invasion of Russia in 1812. This was drawn from Charles Grant and Stuart Asquith’s Scenarios for All Ages.  Actually, as the scenario called for river gunboats and transport barges we simplified it slightly by factoring all of those out. The 8×6 foot table was divided by a wide river – the Palava – running between the two long table edges.

On one side of it was  the village of Koshka, which was held by the Wurttemburgers, attached to Ney’s III Corps. In fact the defenders (8 infantry battalions, 3 cavalry regiments and 3 gun batteries was divided between the two sides of the river, as were our Russian attackers – the 24th Division of Doktrov’s 6th Corps (12 battalions, five cavalry regiments and three batteries). Our objective was to capture the village.

We got off to a fairly late start for some reason, but our Russians were divided up between German Michael on the left beyond the river, Ken on the right and me in the middle, in front of the village. Campbell commanded the Wurttemburgers in the village and on the far bank, while Peter commanded the German left flank, facing Ken. The Wurttemburgers deployed in secret using a map, and then we deployed before they put their toys on the table. Strangely they’d put more forces than we thought on the far bank of the Palava, including all their cavalry. Facing them, Michael had two light cavalry regiments, two jaeger battalions and our position battery of 12-pounders.

The game began with Ken launching his unit of Cossacks in a headlong charge at the enemy guns. He almost captured them too, but some lucky dice rolling by Peter saved the day, and the Cossacks were forced to retire. They spent the rest of the game licking their wounds (or rather recovering their lost fatigue points).

Not to be outdone, Ken threw in his Pskov dragoons next. This time the charge worked, and the guns were overrun and lifted from the table. Deploying in support of them was a horse artillery battery, and a cuirassier regiment supported the dragoons by forming Ken’s reserve. Job done the dragoons pulled back a little, to make room for Ken’s infantry which was marching up behind them.

Meanwhile, on the far bank of the Palava Michael’s guns went into action, firing at a Wurttemburg battery on the river side of the village. The rest of his mixed brigade had to keep Campbell’s right wing troops from intervening in the fight around the village. The river could be crossed two ways. First off, a wide ford lay just beside the village, which anyone could use. Then the Russians had two boats, which between them could transfer half a unit per turn from one bank to the other. So, Michael had to keep the Germans from the ford.

In the centre my infantry – six battalions of them – moved forward, supported by a 6-pounder battery. On my right Ken had four more battalions, which were the first into action. they poured through the gap formed by the destruction of the Wurttemberg gun battery, and piled into the German infantry beyond.

This involved a rather impressive charge by a Russian attack column, and the destruction of one German battalion, and the retiral of another. So, on that flank things were going quite well. However, the clock was ticking. We’d wasted a lot of good gaming time, and now we were battling the clock. My infantry assault went in, with three battalions up front, supported by three more.

On my left – nearest the river – my leading jaeger battalion rolled over a second Wurttemberg gun battery, while my infantry failed to charge home against a third one. Similarly my first assault on the village buildings was repulsed. Attacking building is quite hard – to do it properly you need to soften them up with artillery first. However, we didn’t have time for such niceties.

The real Wurttemburg success came over on the far bank of the river. there a spirited cavalry charge caught Michael’s jaegers in line, and they were chopped to pieces. the cavalry continued on to hit the flank of the 12-pounder position battery, so that went too. In the final turn a cavalry clash led to the loss of the Russian ulhans, making it a pretty comprehensive win on that far bank of the Palava. That meant that if he wanted, Campbell could detach troops to reinforced the village on the opposite side of the river.

That’s where we left it. As we finished my infantry were preparing to launch another assault on the village – some Russian units were already in it, where they could block the ford. The rest were planning to roll over that remaining gun battery, while my own guns were getting set to bombard the houses. Instead, time ran out.

On the Russian right Ken was doing pretty well, having whittled down Peter’s defenders quite nicely. In the end we decided to call the unfinished game a draw. Going by the clock, the Wurttembergers still held the village when the time came to pack up. On the other hand, the Russians had now gained the upper hand, at least on the Koshka side of the river. It was a good little game, but next time we’ll need a tad more time to finish it, or else try it again with less lead on the table.