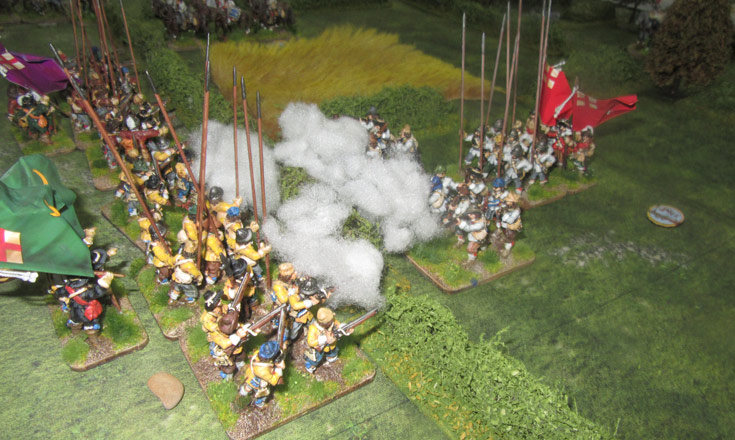 With others away south it was just Sean and I this week. So, we reprised our roles as the Earls of Doncaster and Rotherham and resumed our intermittent fictional campaign set in ECW Yorkshire. This time, the Royalist Earl of Doncaster (Sean) was busily besieging the Linconshire town of Scunthorpe, in a bid to open to road from Rotherham to Grimsby. That meant access to foreign powder and weapons. The siege depended on powder itself, and so it was important to keep the besiegers lines of communication open. So, Rotherham decided to attack Hatfield, where possession of nearby Stone Hill effectively cut the road to “Scunny”. 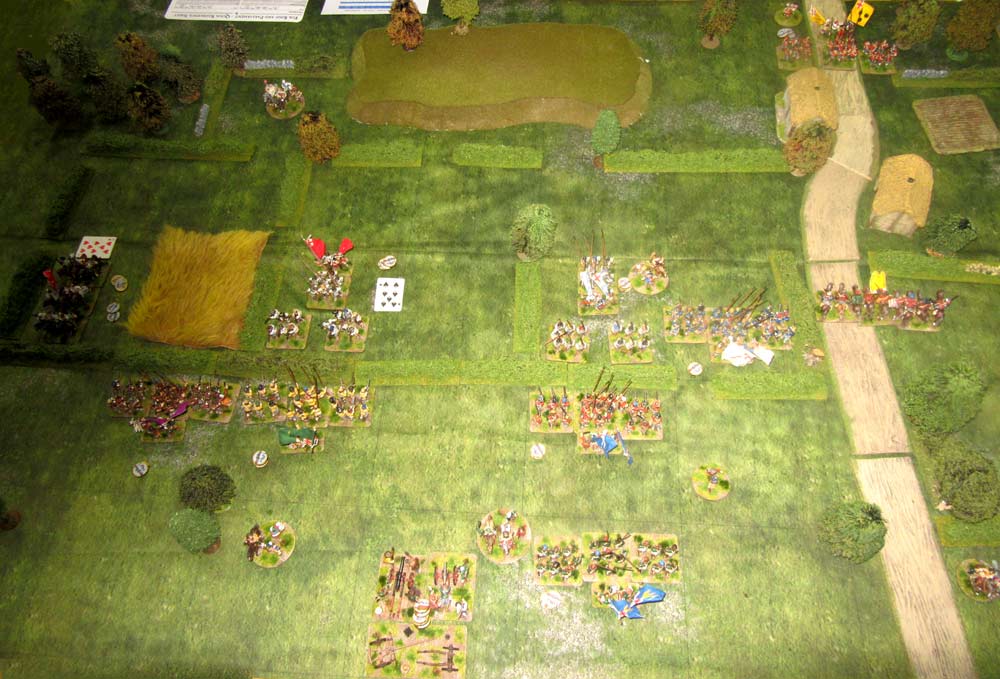 Hatfield and Stony Hill were held by a small force of three regiments of Royalist foot, plus one each horse and dragoons. These were good quality units though, and included Donaster’s veteran foot and horse. The Earl was also there in person, having been warned of the impending attack. Facing his was the Earl of Rotherham, with five foot regiments, plus one each of horse and dragoons, and an artillery battery. This sounded impressive, but most of the units were the raw troops of the Leeds Trained Bands. The battlefield was dominated by enclosures – a bit like the real Battle of Stratton fought the same year. Behind them was  low-lying Stone Hill. 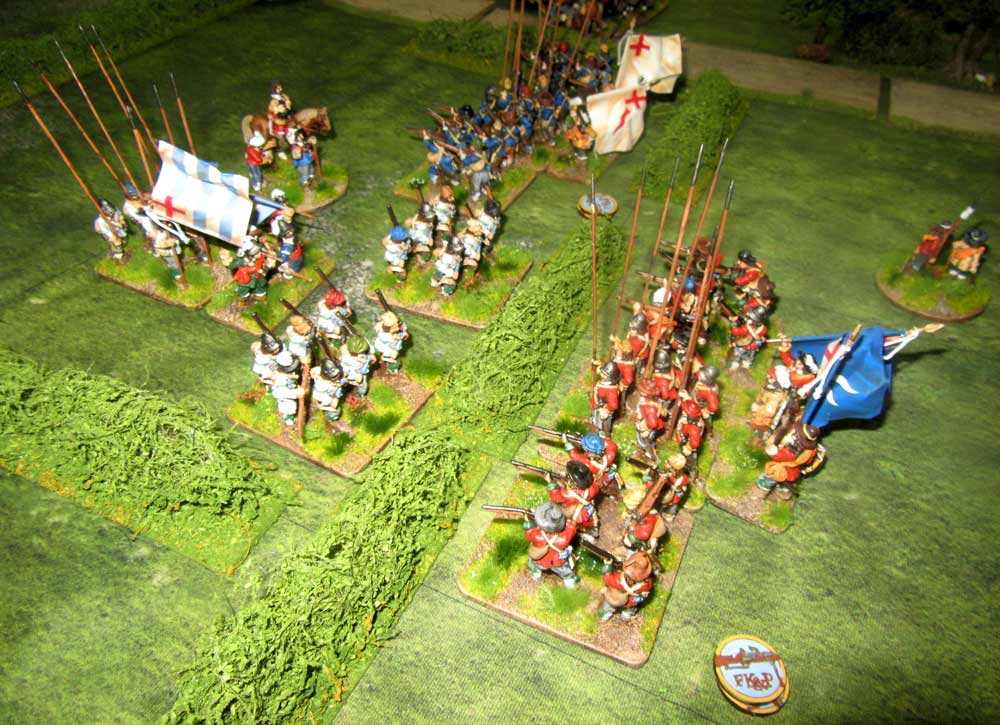 We fought the battle on a 6×4 foot table, with a 20cm grid. You can make out the grid in some of the pictures, but it really isn’t very obtrusive. Oh, and of course with these rules there are no dice or tape measures – just playing cards. Sean began by deploying quite far forward in the hedged enclosures, planning to inflict damage before falling back to the hill. I simply deployed in the open ground facing them, close to the road running through the small village of Hatfield. Then it was simply a case of pressing forward. 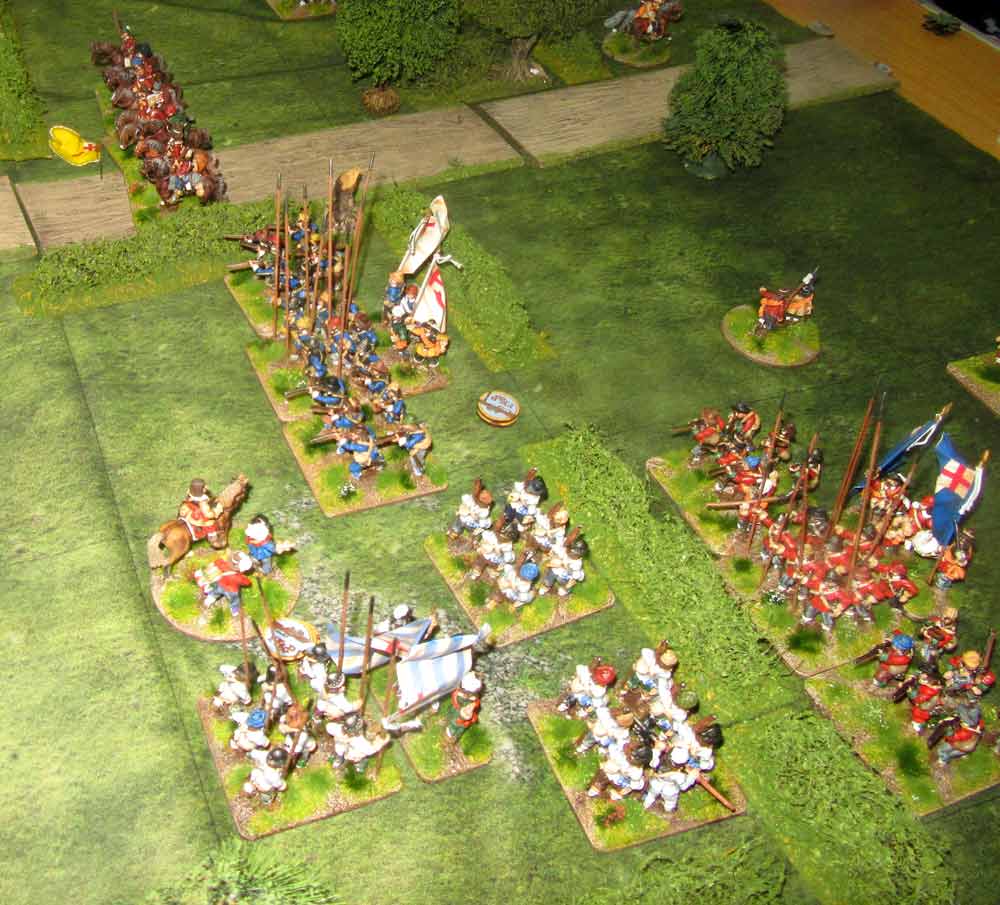 The battle began well enough. The leading Parliamentarians pressed forward to the hedge, while the guns unsuccessfully tried to bombard the low hill behind them. The dragoons advanced south down the road into Hatfield (now the M18), and through what is now the motorway service station. The raw cavalry warily covered their eastern flank. On the west side of the battlefield though, Doncaster’s veteran horse and dragoons appeared, meaning business and threatening the left flank of the Parliamentarian foot. 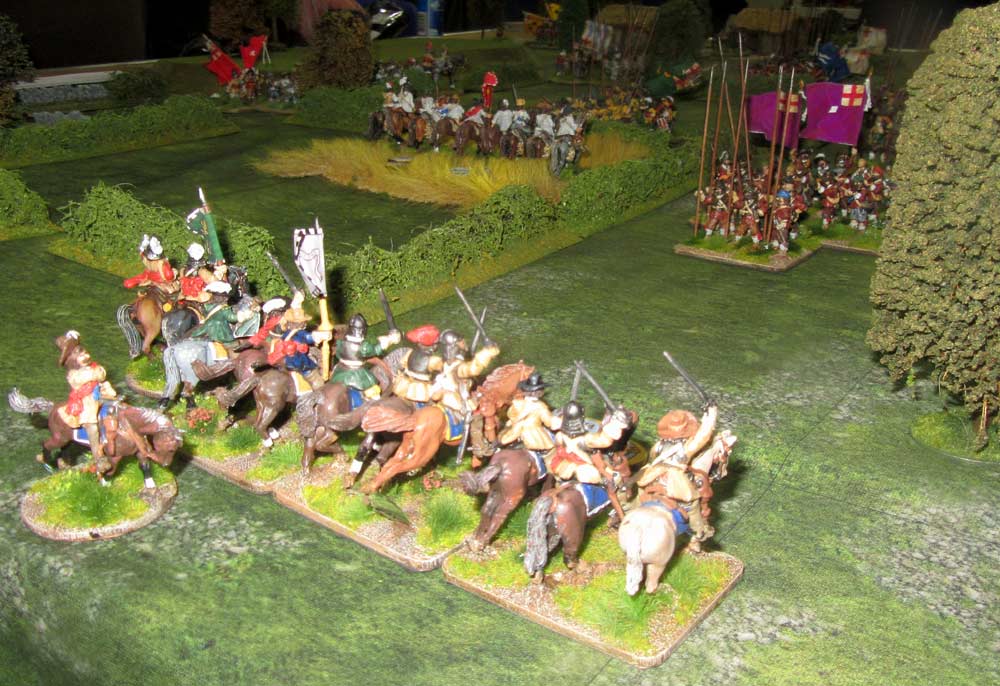 Prideaux’s Royalist dragoons dismounted behind a hedge, and began firing into the flank of Boothroyd’s foot. They weren’t very good shots though. The advance of the Earl’s horse though, was stymied by the raw Huddersfield Trained Bands, who not only turned to face them, but also managed to form a protective “hedgehog”. That effectively tied down those two units for the rest of the game. 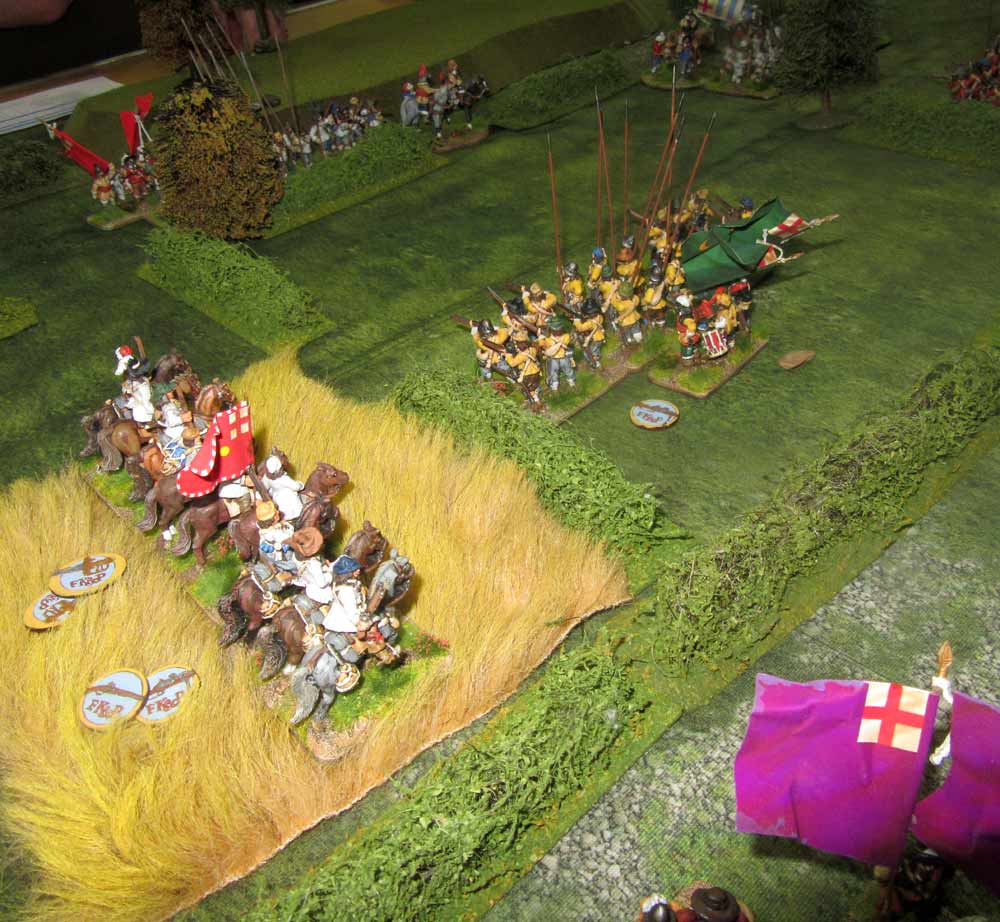 In the centre the Royalist musketeers of Arkwright and Barraclough’s foot did what they could, firing salvees at the Parliamentarians before falling back towards their pike blocks. they then retired back over the next hedge, which was their main line of defence. My foot followed up, with Boothroyd’s being harassed by those darned dragoons. However, my “hedgehog” was able to fire one die a turn, and amazingly they scored some telling hits. In two turns Prideaux’ dragoons had enough, and fled the field. Two Victory Points! 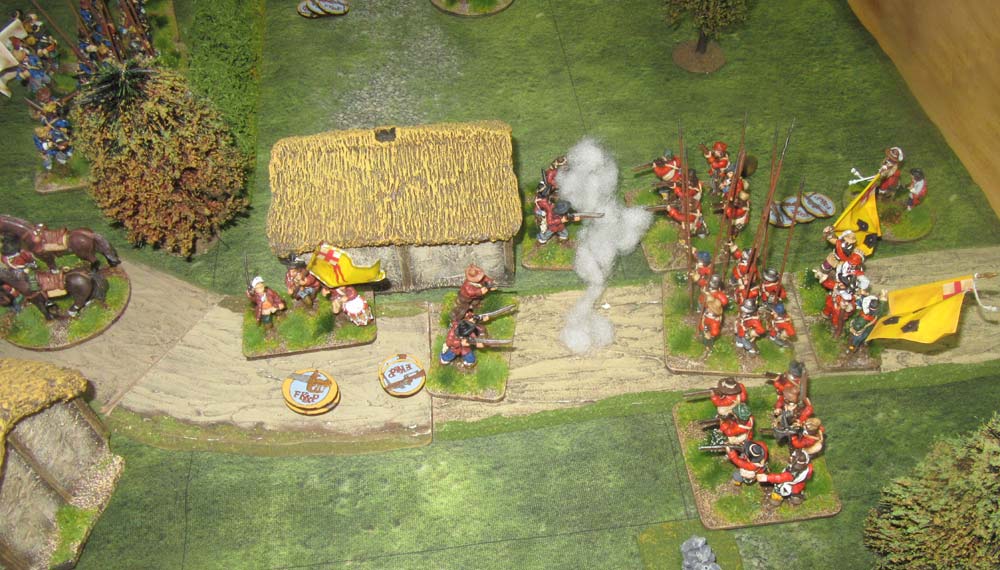 Things were now reaching a climax. On the right Lilburne’s dragoons had occupied Hatfield, and were firing at Doncaster’s veteran foot. The supporting horse of Thackrey’s regiment though, couldn’t do much to help apart from aimlessly caracoling and firing their pistols. In the centre though, the battle for the hedgerows was really becoming fraught, particularly for the outnumbered Royalists. 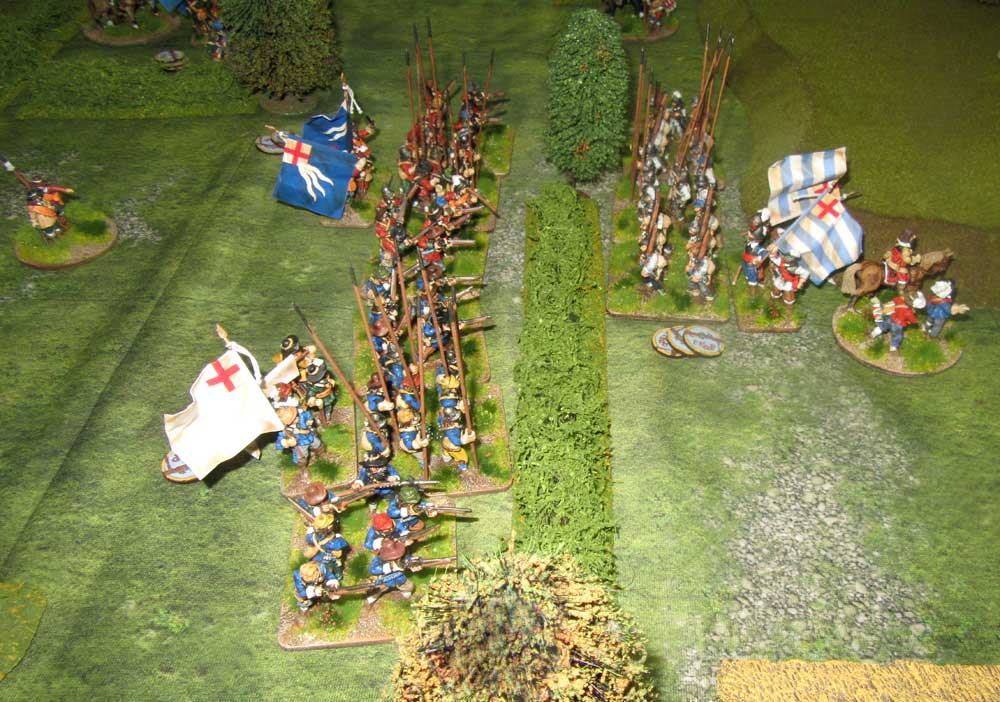 The real problem is that Arkwright’s and Barraclough’s royalist foot couldn’t be everywhere. So, I was able to push the Pudsey Trained Bands forward just to the east of Hatfield, which meant the line of hedgerows had been breached. That’s them with the white flag above. They didn’t do much apart from firing ineffectively at Doncaster’s foot in front of them, but it didn’t help Royalist morale. 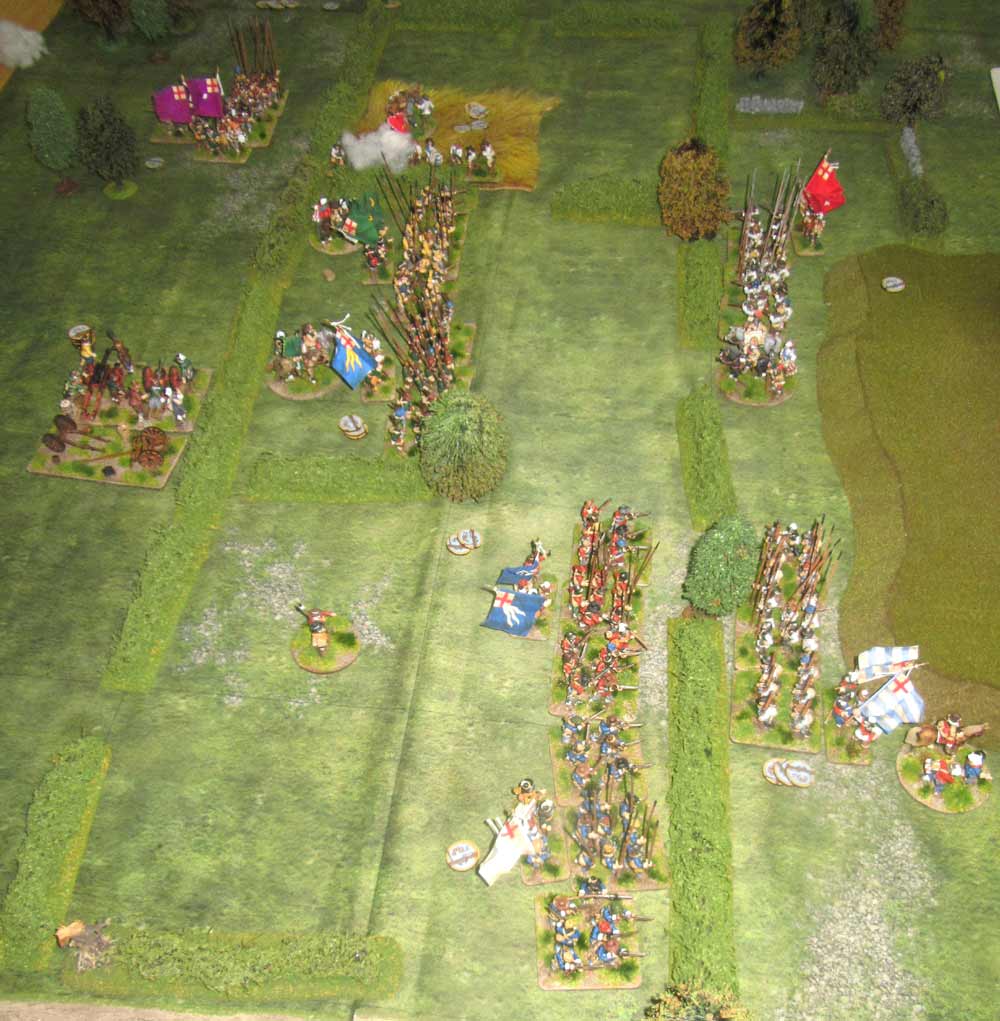 It was now time for “the big push”. My Parliamentarians had four foot regiments in the fight, even though most of them were raw. The better-trained Royalists couldn’t hold out at 2-1 odds, could they? Inevitably it all came down to push of pike. My best unit, Boothroyd’s yellow-coated foot pinned Arkwright’s foot to their front,  allowing their neighbouring regiment, Rotherham’s greencoats to push on unopposed across the hedge and on to the slopes of Stone Hill. That meant that Barraclough’s  foot had enemy units on either side. 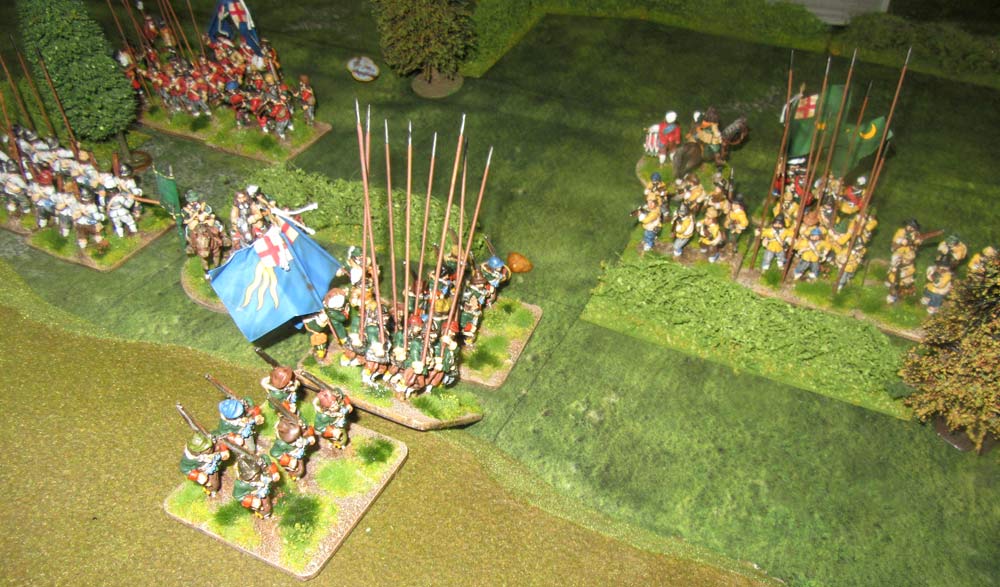 The “greencoats” then turned to face Arkwright’s Royalist foot, who countered by turning to face them. However, that exposed their flank to Boothroyd’s yellowcoats, who blazed away across the hedge into their flank. Two hits were scored, and weren’t saved. The Royalist unit was disordered already, so it duly fled the field. The Earl of Doncaster narrowly escaped capture, but managed to reach the protection of his still stymied horse. That then, meant the battle was all but over, bar the shouting. A last foolish Parliamentarian cavalry charge was repulsed by Doncaster’s veterans, and the game ended. Technically it was a draw, but in campaigning terms the Parliamentarians had Stone Hill and Hatfield, which meant the siege of “Scunny” will no doubt have to be lifted.  Huzzah! 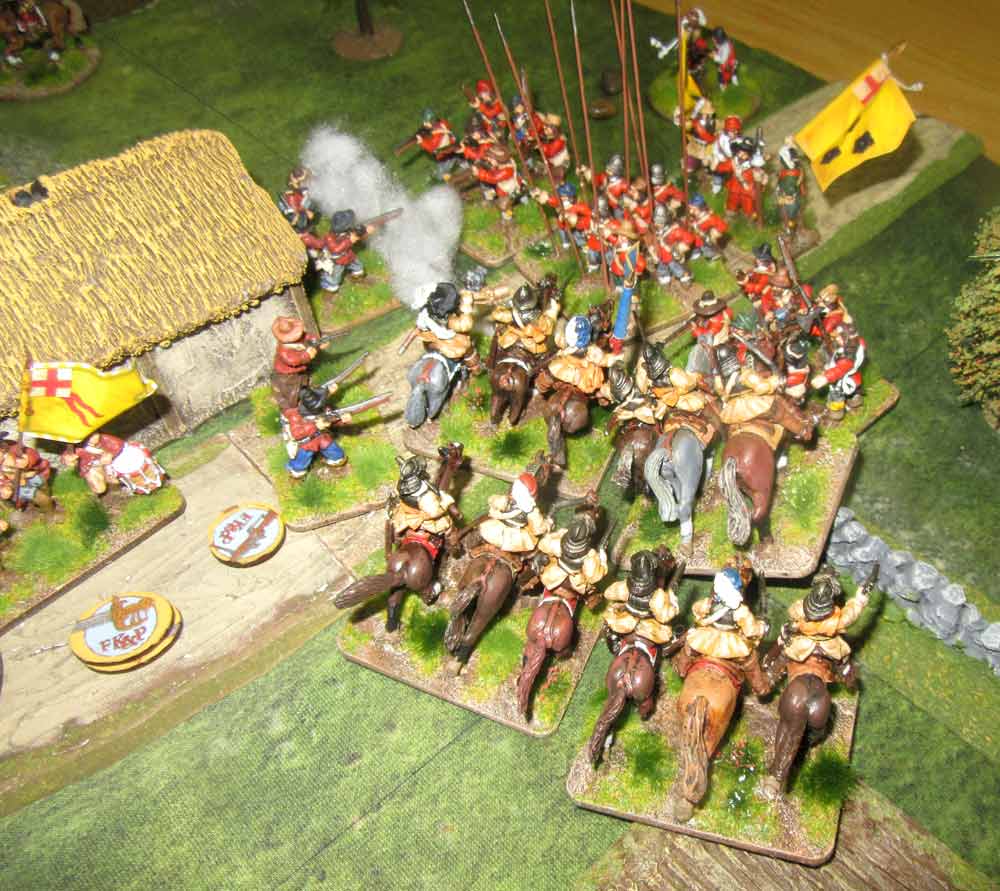